“The personal is political.” That sentence wouldn’t gain popularity as a feminist rallying cry until the 1960s, but it could also be the tagline for season 1 of The Crown.

The finale opens with another flashback to Edward’s abdication, with Edward meeting his brother, Albert, not yet George VI, to tell him. The Crown is his. Albert asks if he really loves Wallis that much, more than country, family and brother, and Edwards says he does.

“My daughters, this will crush them,” Albert says. He calls those daughters to him and makes them promise that, unlike his brother, they will never put anyone or anything before each other. They both do. I’m tearing up already.

Back to the present. Beautiful Margaret is finally 25 and able to marry Peter Townsend. Elizabeth looks so happy to give her sister what she wants, what she promised. If you didn’t know what was coming, the scene’s gloomy lighting (which is ubiquitous throughout the episode) would tip you off.

Private Secretary Michael Adeane tells the Queen that the law that she thought would let Margaret marry whoever at 25 actually has another part that no one told her about. If Margaret is to marry without her permission, she actually needs to get Parliament’s approval. Michael looks positively malicious here, like a little henchman of an evil genius. And he is! He’s acting on the orders of Peter Lascelles, who plotted with the Queen Mum.

Here’s the dilemma. If the Queen gives Margaret her permission, it’ll strike a huge blow to the Church of England, of which she is head. If she doesn’t give her permission, Parliament won’t give it either, and she’ll have betrayed the promise she made to both Margaret and her father.

Elizabeth breaks the news to Margaret at the worst family picnic ever. Philip is teaching Charles how to fish, and he’s mean. Later he tells Elizabeth his children got mixed up, because Charles is a girl and Anne is a boy. I did not expect this show to make me sympathetic to Prince Charles, but here we are. And Margaret storms off when Elizabeth tells her about the delay, but Elizabeth promises she’ll figure it out.

Meanwhile, new Prime Minister Anthony Eden is causing as many problems as anyone else. My prediction last episode that his literal clean bill of health was a lie was right, as he drugs himself all episode. I looked it up, and he was taking amphetamines to deal with the consequences of his botched gallbladder surgery and historians believe this was giving him paranoid delusions.

Which really helped me understand what happened between him and Colonel Nasser, the new head of Egypt. Eden, reporting back to the Queen, swears that he was perfectly lovely and Nasser was needlessly aggressive, but flashbacks illustrate how his interpretation is just a bit misleading.

But Elizabeth’s main concern is Margaret, and Eden says he’ll see what he can do.

Cut to a Scottish dance party and Prince Philip in a kilt! He’s complaining to his mother-in-law about how Elizabeth wants to send him to Australia to open the Olympic Games in November. He calls it his exile to the “penal colonies,” a nice touch of aggressive awfulness.

Thankfully the Queen Mum has Elizabeth’s back. “You have more freedom than any consort in history and you repay it by stomping and sulking.” It’s not just a defense of her daughter and a condemnation of Philip, but her regret, as the most recent consort but with no husband, no power but backroom manipulations.

Back in London, Peter has returned. When he and Margaret embrace, it’s incredibly sexy. But the music is so foreboding and the room so dark that your heart breaks even as you watch their happiness.

Eden returns to the Queen with his answer; several members are violently opposed to what they see as a subversion of the Church’s teachings and the decay of moral standards. There’s no chance parliament would give permission. If Margaret wants Peter, she’ll have to be married in a civil ceremony and denounce her title and her family.

Margaret lashes out, saying she can call their bluff and live “perfectly happily” without the staff, cars, parties, and attention. But could she? In the next scenes we see her waiving at paparazzi and living it up at a party. That’s who she is. Later Margaret and Peter embrace in bed, no longer frantic, like old people who know it’s almost over. They speak of the warmth and sympathy the public has for them. All I could think is that no one has that for Elizabeth. Margaret wants to see Elizabeth as unfeeling and unsympathetic, ignoring the lengths she goes to trying to make it happen.

Elizabeth tries one last time with Eden, reminding him that the cabinet contains at least four divorced men, including Eden himself. Get him! She meets with the biggest archbishops to plead Margaret’s case. But the archbishops remind her she’s defender of the faith. What in any other family would be a minor argument in hers could be the destruction of the bedrock of the church, and thus the monarchy, and thus Britain. Damn.

Philip doesn’t even try to understand. He tells her it’s time to concede and give the people what they want, to not be the queen for a minute and be a wife, sister, mother, a “living breathing thing, a woman.” How little attention he’s been paying to her, that he thinks those things can be separated.

Elizabeth calls up the one person who does understand: her uncle. The choice that seemed so flippant between Wallis and the Crown still haunts him. He describes her and him as strange hybrids between a person and a monarch. “I understand the agony. It will never leave you.”

Elizabeth and Margaret meet, Elizabeth in a dress — all tradition — and Margaret in pants — all progress. It’s an incredible, devastating scene. Elizabeth says as a sister she wants to let her, but —the pause she takes here is excruciating — as queen she has no choice. She knows she’s breaking both her pledges, to sister and father, and asks forgiveness. Margaret is terrifyingly quiet, weeping as she explains that she needs Peter to make her strong, to keep from flailing.

But if Elizabeth breaks her pledge, Margaret doesn’t. She doesn’t give up her family for Peter. She promises him instead that she’ll never forgive Elizabeth and she’ll never marry. She’ll break at least one of those. Why does she give him up? Is it because she really can’t live without the parties and attention? Is it because of the pledge she made her father and sister? Because she was his favorite? It’s complicated.

As the season comes to a close, everything is falling apart. Eden watches a newsreel of Nasser’s latest aggressions, high on drugs. Margaret goes to a party, as beautiful as ever, but so sad. Peter returns to dull, dark Brussels, a photo of Margaret his only reminder that it ever happened.

And Philip. As Elizabeth gets ready to take her official portrait, he confronts her. He agrees to go to Australia, but he’s so mean. I want to shake him and remind him that he loves her, and she loves him. He’s got no empathy, no sympathy, so self-absorbed and bitter that his life isn’t the way as he imagined. Not once all season does he consider how she feels.

But if Elizabeth Windsor has marital problems, Elizabeth Regina has no time for falling apart. There’s a beautiful, unsmiling portrait to take of the young Queen — alone. 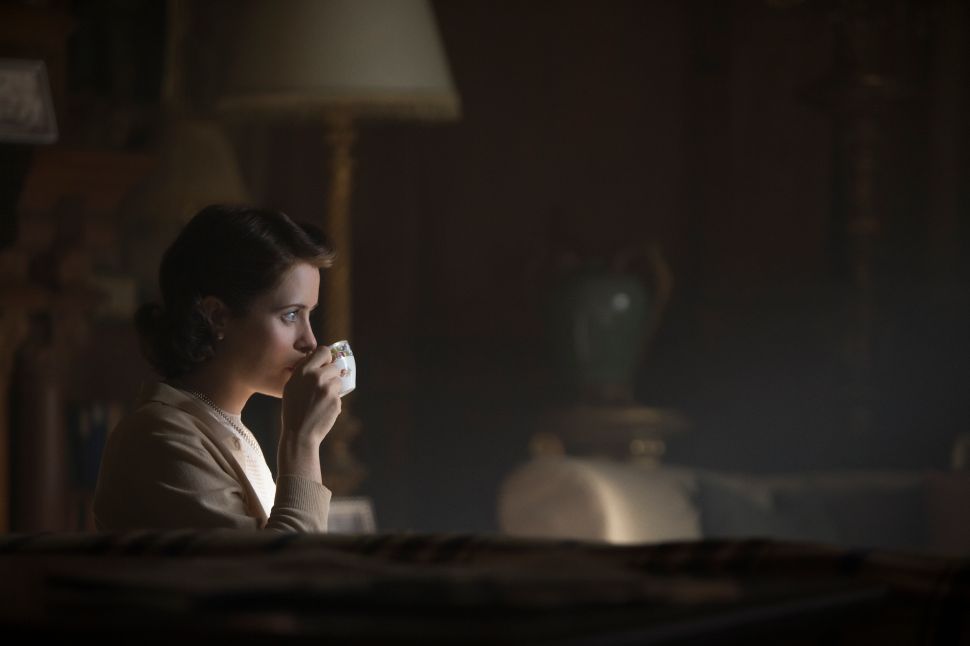