If you’re reading this before you watch the first episode of Netflix’s newest, most expensive series, The Crown, let me warn you—there is a lot of bloody coughing. A lot. I’m not saying that the show does a bad job presenting the illness of King George VI (Jared Harris) in his final years. In fact it’s very moving and will make you grateful to live in 2016. But it is a little gross.

And that’s how the series opens: the King is coughing on the eve of the wedding of his daughter, Princess Elizabeth (Claire Foy), to Phillip Mountbatten (Matt Smith), the “homeless” noble with an institutionalized mother and sisters married to Nazi princes.

Of course, they’re not like any other family. As he waits at the altar for his bride, Phillip jumps when he hears the crowd cheering outside (they’re cheering for Winston Churchill, not Liz, but he doesn’t know that). As much as I, as a modern viewer, want to say, “Well what did Phillip expect marrying the heir to the throne?” clearly he wasn’t prepared. And Elizabeth isn’t really either. Maybe you only can be once you do it yourself. When she arrives at church, she’s not a glowing, perfect Diana or Kate. She looks a little scared.

But when Elizabeth slowly says her wedding vows while Phillip beams at her, making wry little faces, it’s basically the sweetest, cutest wedding scene ever. Post wedding, while they take photos in front of awkward backdrops (amazingly funny), the Queen Mary remarks to the Queen Mum that it’s an amazing feat that Elizabeth married Phillip, since, when she first chose him, everyone thought it was a bad idea. “She turned us all on our heads and barely opened her mouth in the process.” The Queen Mum says, “You overestimate her,” and the Queen Mary replies, “You underestimate her.” And we know which queen is right.

I like that this is a story with a man, Phillip, setting aside his career to support an ambitious woman. We get so much of the opposite in real life and fiction—brilliant, sparkling wives who could have led the world, instead dedicating themselves to propping up their husbands. But, as George tells Phillip on their weirdly sad duck hunt, it’s the most patriotic and loving thing Phillip could do.

This episode didn’t dive into politics explicitly, but it’s there if you squint. George wants Elizabeth to go on the Commonwealth tour in his stead, but what he doesn’t mention is that the idea of the British Commonwealth, instead of the British Empire, is only a couple years old. Nobody knows if it’ll work. Elizabeth saved ration coupons to pay for her wedding dress in solidarity with the commoners who were still recovering from World War II austerity (that’s why people were pissed about Phillip’s German relatives). Winston Churchill, newly re-elected, is old now (though it’s great to see 10 Downing Street, last viewed by me in “Love Actually”). 1947 was precarious, even if it’s hard for us to remember through the lens of history.

I would be remiss to not mention baby Charles and Anne, who make me feel the way little Kim and Kourtney and Khloe made me feel during “The People vs. O.J. Simpson.” Also, when is this show going to end? Are we going to see Charles grow up and marry Diana and Harry dress up like a Nazi? I’m not opposed.

At the beginning of the episode, King George seems a little bit like a baby, snapping at his helpers as he dresses for the wedding, only calmed by a childish game of dirty nursery rhymes. But when, at Christmas, carolers join the royal family, singing “In The Bleak Midwinter” and presenting the crying king with a paper crown, it all comes together. These are his people. He is their king. And it’ll all be gone so soon. It is exactly how I imagined Christmas in Britain would be, really.

The next day, George finally takes steps to prepare for his demise and Elizabeth’s ascension. He shows her the box of documents and reports that he looks over every day. They joke together. On his desk lays the paper crown. It’s the smallest concession to the truth: that he’s not going to be king forever, that the makeup can’t cover his illness, boxes can’t hide the bloody handkerchiefs.

And at the end episode, Elizabeth sneaks into his office while he and Phillip go on their weird duck hunt bonding session (which includes some lovely tweed coats, I should add). She sits at his desk and looks at the locked box, on which, etched in gold, are two words: The King. Not for long. 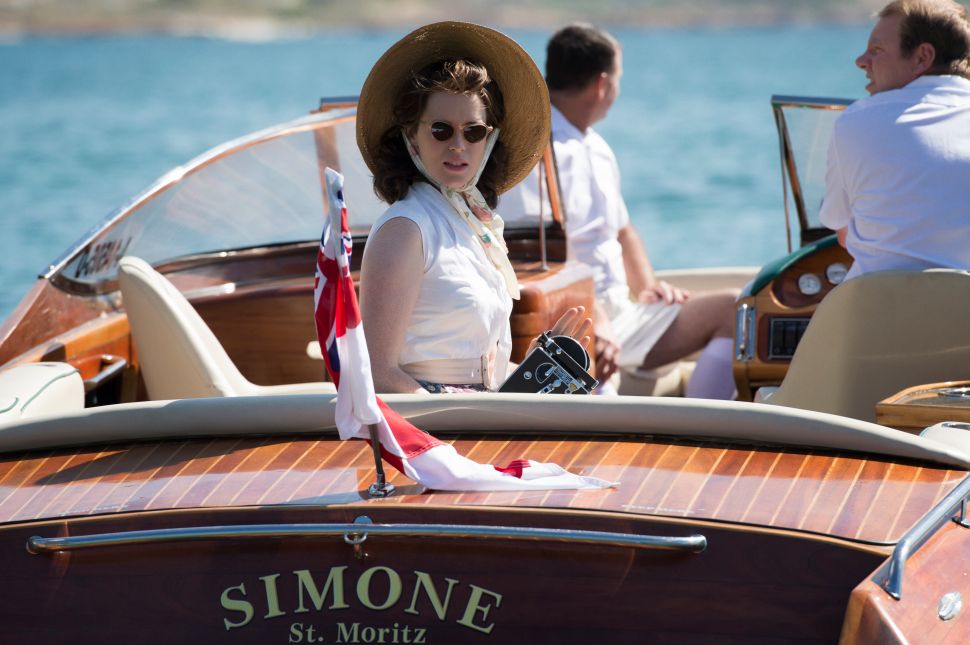