Just after the start of my children’s school year, when Indian summer still insisted on the revelation of clavicles and skin, I wore a Holter monitor out into the world. For those unfamiliar with a Holter, it’s a portable EKG worn 24/7, except while showering, that assesses the relative health of a malfunctioning heart and turns its wearer into a walking cyborg.

An electrode just to the right of the upper sternum peeked out of summer-weight shirts, impossible to hide. (The other three electrodes were more discreetly glued directly under the left nipple, under the left armpit and on the left side of the lower torso, between naval and hip.) Wires attached to these electrodes hung down between my shirt and pants. A cellphone-like event-recorder had to be worn in a DEFCON-nerd-level leather holster attached to my belt, both to keep it near the battery-operated recording device, worn like an oversized pendant on a black lanyard around the neck and to have it immediately accessible to press the “record event” button whenever a new heart episode occurred, which during my month-long monitoring was approximately one-10th of my waking and sleeping hours. Pressing this button would elicit a loud doorbell chime, which I could not mute during meetings at work or while sitting in a theater, so I skipped the recording of those palpitations, which probably messed with the data.

The reasons for my malfunctioning heart are too boring to go into, but briefly put, it was having electrical issues—PVC’s, short for premature ventricular contractions—so frequent and intense, I was passing out at work, at home and everywhere in between. At times my heart felt as if it were beating, irregularly, out of my throat. My cardiologist needed the kind of data on these misfirings that only wearing the Holter day and night could provide.

I’m prone to reading metaphor into everything, but when you’re wearing a visible heart monitor for an entire month and fainting three times a week and feeling your most vital organ attempting to break free from its cage of ribs, it’s almost impossible not to push that poetic license to the next level. Basic activities such as riding the train to work or walking the dog or strolling through the aisles of the grocery store became fraught with unintentional symbolism, as if the secret burden I’d been carrying around in my doomed marriage for decades were suddenly writ large across my chest: Look here, everyone! Brokenhearted lady in Aisle 2!

I felt, for lack of a better term, naked. Revealed. Unable to hide the pain. Never mind the crimp it put in my dating life.

The night I had to go to the premiere party for the show Younger, on which I’d been a consultant, I summarily ripped off the electrodes and wires before meeting my date, a friend appropriately young for the show whom I knew wouldn’t mind the cyborg chic, but I was too vain to appear at the premiere party for a show called Younger wearing the hardware of the geriatric. Even so, I felt as guilty that night about removing the monitor as the character of Liza does in Younger about hiding her age. The next morning, reattaching the electrodes in front of my friend, I felt like Cinderella after the ball. The sex-death metaphor was so…overt.

Soon thereafter, the depression set in. Wired up, I shut down. I stopped answering the chatty men on the dating apps. I was suddenly not allowed back into my office until I could stop fainting, and since I couldn’t stop fainting, I was spending many daylight hours alone in bed, having PVC episodes and trying to catch my breath. The one time I did force myself to go out on a night my ex had custody of our 10-year-old, I wandered the streets solo, feeling a far greater kinship with the stooped man with the walker than with the vital buskers in whose music he’d stopped to find solace. In my apartment later that night, with PVC’s raging, I felt vulnerable: What would happen if my heart suddenly stopped, and I was all by myself?

Enter—or rather re-enter—Mr. Unsucky, who has agreed to be identified thus. He’s the man I briefly wrote about in my last column. He was not only undeterred by the wires crisscrossing my torso, he actively wanted to see them and to keep me company on the nights I was solo.

I was too vain to appear with my date at the premiere party for a show called ‘Younger’ wearing the hardware of the geriatric. I felt as guilty that night about removing the monitor as the character of Liza does in Younger about hiding her age. The next morning, reattaching the electrodes in front of my friend, I felt like Cinderella after the ball. The sex-death metaphor was so…overt.

Mr. U is 31 to my 50, and he would like to have kids one day. I already have three and no desire or capacity to have more, so our life and reproductive goals are star-crossed. But he is also an open-hearted Dionysian with a Buddhist bent, and we click on many of the levels that I’m finally learning, this late in the game, count: intellectually, spiritually, sexually, empathically. Time spent with him always feels like time well spent. Our dates and weekends together resemble epic poems, with one heroic act of kindness building onto the next. We laugh frequently and share the same black humor. We speak openly and honestly about our pasts while living firmly in the present. We avoid talking about the future to fully enjoy our bubble of stolen hours together right now, while we have them.

It was Mr. U who first suggested I try the naked yoga class he’d attended, after hearing someone talking about it in the park. “So, what, you just heard about it, looked it up online and went?” I said.

“Because it scared me.”

After much testing and table-tilting, my cardiologist finally put me on a beta blocker when the palpitations grew worse, and that day the Holter monitor miraculously recorded a much less spastic heart. A few days later—the day after Rosh Hashanah, in fact—with my heart now back to a nearly normal, unsyncopated beat, I was finally allowed to remove the monitor for good. I felt, for lack of a better term, reborn. And with that season-appropriate rebirth and new optimism and strength came a surge of courage. I texted Mr. U. “Naked yoga tomorrow night?”

He wrote back immediately: “Yes.” Then he sent me the link for our tickets.

The next morning, on my way to work, I had second thoughts. “Nervous!” I texted him.

“Said the 31-year-old with the perfect body to the 50-year-old mother of three,” I typed. In meetings that day, gleefully Holter-free, I tried not to think about the utter insanity I was about to embark upon for the seemingly misguided sake of proving to myself that I could or was still alive or…I wasn’t sure exactly why I’d lost my mind.

When you’re wearing a visible heart monitor for an entire month and fainting three times a week and feeling your most vital organ attempting to break free from its cage of ribs, it’s almost impossible not to push that poetic license to the next level.

But that night, sitting fully clothed on my yoga mat at the very back of the class at Naked in Motion, I started to relax. Willow, our gentle teacher who lives up to her name, explained the rules of the session before we disrobed. Nakedness was mandatory. Cellphones were banned. Consent was king. Cruising was forbidden. Anonymity was strictly enforced: If you ran into one another outside class, you were not allowed to bring it up. “Does anyone have any questions or comments before we begin?” she asked.

“Yes,” said a man in front, who self-identified as homeless. “Someone here reminds me of my balls.”

Balls? Did he just say someone here reminded him of his balls? I looked over at Mr. U, seated directly to my right, my mouth agape, but he didn’t seem perturbed at all by the comment, and neither did Willow, who mumbled a semiprivate response I also didn’t hear, so I let it go.

My heart barely skipped a beat. I calmly removed my clothes quickly, like everyone else, and thirty seconds later, a sea of bodies appeared before my eyes. All shapes. All sizes. All colors. Mostly men. A few women. Most of them younger. A few older. It was weird, and then it wasn’t. The class began. Breathe in. Breathe out. Willow’s voice was our lullaby. Within minutes, I forgot I was nude.

Or rather this: If I’d felt painfully naked during my month of wearing the Holter monitor, as if my insides were suddenly revealed for the world to see, when I was actually naked in a class full of other equally naked bodies, I felt protected, anonymous. A naked body is just a body. It has no signposts, no way to identify its wealth, health or inner brokenness. We were all just humans, moving and breathing in space and time.

By the time we settled in for savasana, 30 or so vulnerable bodies close-eyed in the dark, I felt the steady tick-tock of my heart and wept. I am here, I thought. Then, glancing over at Mr. U, and I am loved.

In the end, stripped down, in a universe defined by impermanence, that’s all that matters: life and love. Everything else is just window dressing. So what if our relationship is doomed? For now, it fuels two hearts. And that’s enough.

“You,” said the self-proclaimed homeless man, pointing at me slightly menacingly after class as I was getting dressed and bringing us all crashing down from our lofty heights. “You’re the one who reminds me of my boss.” (Oh, I thought. So it was boss, not balls.) There was a lot to unpack. Was he angry at me for reminding him of his boss? And if he had a boss and a job, why was he homeless? Did I remind him of his former boss? And how did he pay for and charge the cellphone in his hand, the one which went off three times during class until he finally got dressed and took the call outside?

Willow had handed out apples after class. Normally my heart would have been turning cartwheels after that kind of unhinged exchange, even prior to its electrical malfunctioning, but that night, calmed by yoga, love and some kickass beta blockers, I simply bit into my apple and relished its sweetness. Rosh Hashanah was over, with its annual promise of renewal. The days of awe were upon us.

“Shake Shack?” I said to Mr. U, suddenly noticing my hunger.

“Twist my arm,” he said, grabbing mine, and we headed out into the honey-kissed night. 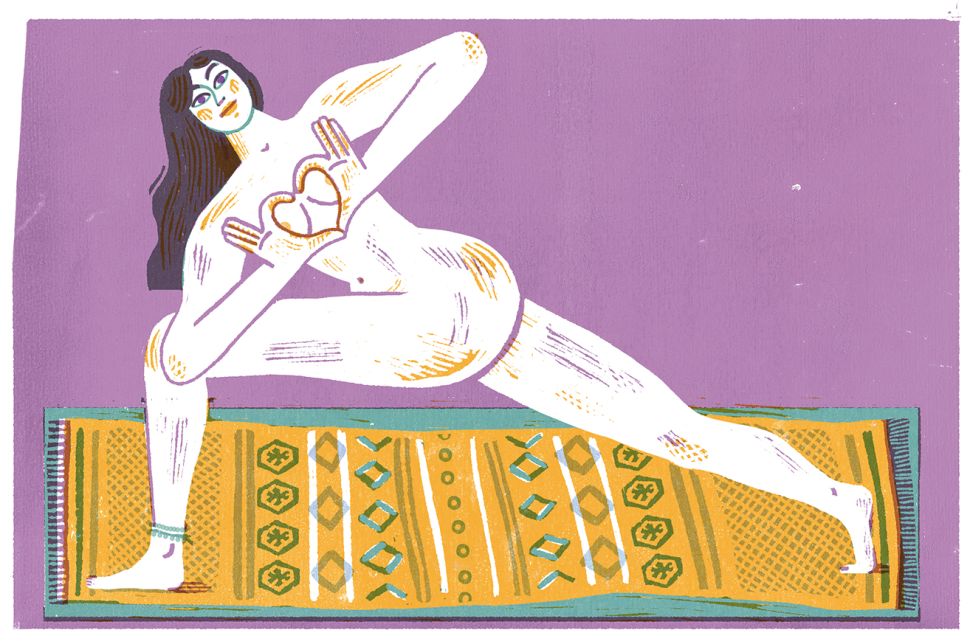