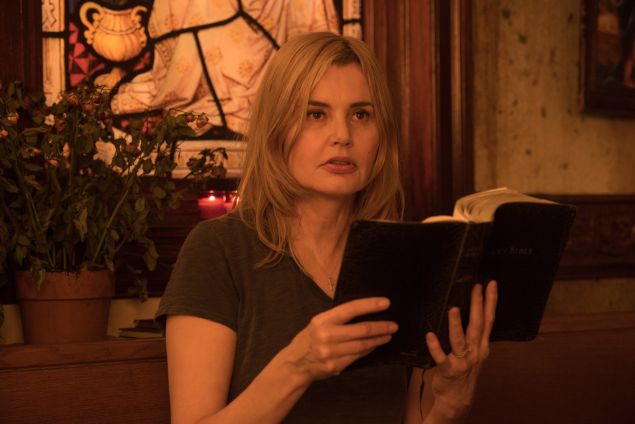 Geena Davis as Angela Rance in The Exoricist. Jean Whiteside/FOX

Last week on The Exorcist, demon-possessed Casey was running loose around Chicago, presumably putting Cleveland Indians hats on people’s heads, covering shifts at The Wiener’s Circle, and giving Kanye West ideas for new monologues to try out on stage. Our heroes wrested her back, and in the first scene of the most recent episode, she’s lined up her whole family and is roasting them Don Rickles-style one by one. She calls her grandmother old, her dad dumb, and her sister a bad-driving lesbian. I haven’t seen burns like this since I spilled hot chocolate all over myself getting a-scared by the many frights and spooks of this nightmare TV show!

Meanwhile, Bennett is recuperating under the expert medical guidance of the two bus-driving Tim Burton aficionados. They call the police to report the corpses Bennett found in the Tattersall boiler room.

Marcus and Tomas get hot under the collar arguing about whether to use Angela as demon-bait. They decide to do so, and the demon taunts Angela mercilessly for having once gotten an abortion. Angela tells a boring story about Casey breaking her foot when she was younger, and it seems to ultimately have some effect on the demon.

The news is covering the discovery of the corpses. Bennett speaks in French to a church official about them, and about the Tattersall conspiracy.

Kat, Henry and Chris simultaneously pack up and debate how best to get out of town—Henry got in touch with an old friend in Toronto, who I really hope is Ferris Bueller. Think about it—at this point, Ferris has probably also had to flee the country for some reason. Kat tells Henry and Chris she doesn’t want to re-enroll in school.

The demon sends Angela back to the old basement from her childhood, where the radio mentions Led Zeppelin bringing their Satanic sounds to town in the near future. Angela watches as her younger self plays with the Ouija board, and the Salesman appears in the form of Captain Howdy, wearing a bright naval uniform, red bird on his shoulder. He looks ridiculous. He looks like Captain Obvious from those commercials. He looks like the very model of a modern major general.

Captain Howdy explains that Regan was not special, she just happened to be the one he grabbed and who got away. He says humans are like vermin, which is an interesting touch because the first episode described the demons in terms of a rat infestation. Angela finally recognizes Captain Howdy as a man she met at the zoo. This parallels Casey’s understanding of the demon as a salesman she met at one point—I feel like these creepy meetings he has with the kids he possesses are important and I wonder if we’ll ever get to see them. The fact that they’re part of the story makes the rules of The Exorcist very similar to those of Twin Peaks, so I wonder if the subtext has to do with molestation—it certainly seems to in this scene. Television has only become more frank about this kind of stuff since the early ‘90s, so maybe the show is choosing to be subtle and not overtly interpret the metaphor out of respect to the source material. On a related note, the show has really nailed the ‘70s / original movie stuff so far, and the younger Chris was especially excellent.

The demon knocks Casey around, threatens to break her neck, then levitates her, breaking her chains. Here’s something to consider: why would a demon prefer to kill the host rather than keeping him or her to keep messing with everybody? Like, why would one be preferable over another, from a demon point of view? How does such a choice relate to causing the accident that led to Henry’s brain damage, or standing in the road and causing Kat to crash her car? Why did the last demon that Marcus tried to exorcise choose to kill the kid when it did? What rhyme or reason, if any, is there to the chaos that demons create?

Anyways, Casey seems to be back for good after a certain amount of exorcism, and Tomas carries her through the crowd The Bodyguard-style. Sometimes, as with the Reservoir Dogs moment last week, the show seems to make cinematic allusions without realizing it or knowing why. The show is like a demon but with pastiche instead of mayhem.

Cops burst in on the one main ghoul we’ve been seeing, and he shoots himself. Kat reconsiders going back to school and notes that Henry is sharp lately. Tomas and Marcus bro out at a bar. This is a very dedicated false mega-happy ending.

After Tomas leaves, Marcus makes eye contact with a fellow at the bar, who comes over to him, but then Marcus has to run out because he sees the news about the bodies being discovered. It’s progressive of the show not to play up Marcus’s sexuality as some big reveal, but it did choose this moment, and I hope it’s not just used as a “tragic” element to his character.

The French guy has his goons put a bag over Bennett’s head. Jessica’s husband finds out about her affair with Tomas and confronts him, threatening to rat him out to the Church.

Apparently the Rances’ plan is still to run away from the law, but only temporarily, and also to sell the house? Either way, Angela and Chris have a conversation in which Angela’s word choices make her sound increasingly like the demon. Then she snaps Chris’s neck all the way around and throws her down the stairs. I’m glad they’re giving Geena Davis more to do, but I will miss Hannah Kasulka being the actress whose character is possessed: in an exceptionally lip-synching saturated TV landscape, Kasulka’s is some of the most skillful, and she is always super-committed, doing gross stuff and being covered in gross stuff every week. I also think it would be fun if every character got to be possessed at some point. Anyways, I’ll see you next week unless I’m trapped in a memory of my twelve-year-old self in a basement, listening to Hanson and cranking away at paragraph after paragraph of pedantic jokes about the latest Land of the Lost episode. 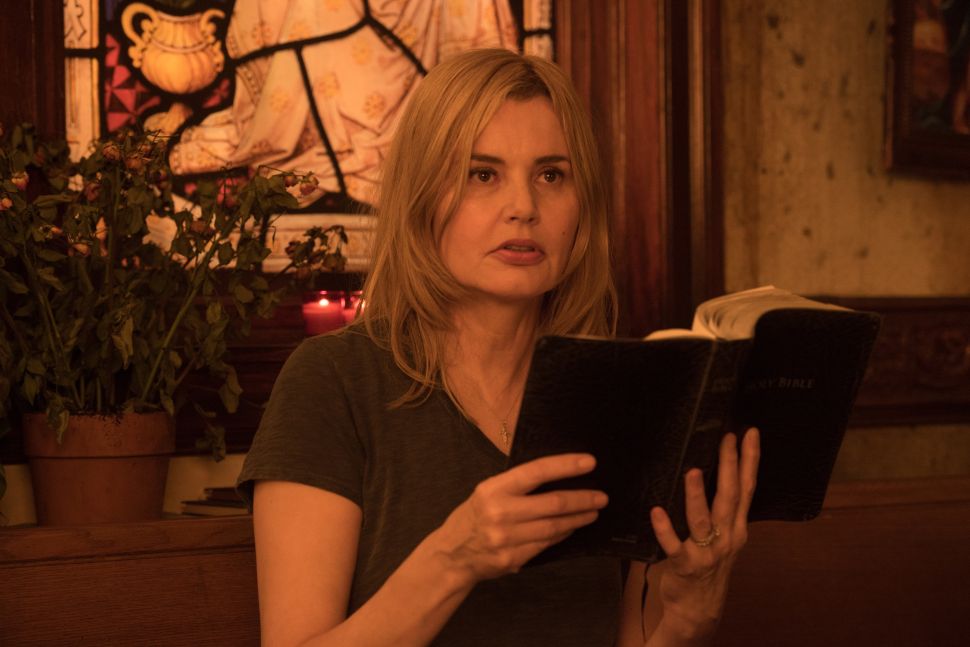