As Good Room’s Wednesday night headliner finishes his soundcheck, members of the opening act bring their gear up into the room and pause their loading ritual to watch. It’s not because of his hair, now white after almost 50 years of making music. It’s not because of his get-up, either—though the cowboy hat and rose-colored tea shades recall a certain essence of American Bohemia that you seldom find around the city anymore.

It’s because Simeon, the mononymous brain behind Silver Apples standing before them, unwittingly invented modern electronic music as we know it. He still commands an instrument of his own design, a hodgepodge of controllers, wires and oscillators that bear his name. And watching the man transform the contraption so seamlessly into an extension of himself, all of us in that room are reminded how all those years ago, in this very city, a new sound emerged from an outsider’s curiosity and daring.

Myth tells of a night in the mid ‘60s when Simeon took the stage of Greenwich Village landmark Café Wha? without his band, a vintage oscillator in their place. Drummer Danny Taylor filled out the synthesized waves with a tribal warmth, a near spiritual pulse of primacy that spelled the instantaneous demise of their Overland Stage Band. And on the night of that sound experiment, Silver Apples was born.

In taking their name from the William Butler Yeats poem “The Song of the Wandering Aengus,” Silver Apples embraced myth themselves, and by lovingly interpreting a Navajo ceremonial dance on their ’68 self-titled debut, they demonstrated a new electronic sound that was firmly rooted in American tradition.

“I always leave a little bit of a question mark wherever I go.”

So the origin of live electronic music predates Kraftwerk, believe it. And it originated right here, in New York City, sprung from the mind of a Southern boy from Knoxville, Tenn., who embraced the same radical sense of experimentation and trial and error that came to define the Village’s golden age of Yippies and beatniks.

Taylor passed away from cancer in 2005, but Simeon soldiers on. “I have hours of two‑track tape of him practicing his drums, all the patterns for each of the different songs, plus new stuff,” he told Sound On Sound in 2010. “So I’m able to just plug him in, pretty much. It’s not like I’m recreating him in any way electronically. It’s still Danny playing.”

Simeon’s since modified that prototypical instrument into something more reliable and road tested, though his trademark oscillators remain. You can still hear them on this year’s fantastic Clinging to a Dream, which continues to conjure the lucid imagery and metronomic epiphanies of his best work. If you listen closely, you can also hear Simeon’s rich and trippy wordplay, kept cryptic and vague to supplant his love of a good mystery.

Catching up with Simeon after soundcheck, we talk about that myth and mystery, about his surprising sonic influences and how, all these years later, he still has no idea what “psychedelic” really means. He doesn’t dispel the storied reverence heaped upon him so much as put it in perspective, removing any of the haughtiness or hubris imposed upon him by countless audiophiles and music snobs. Simeon’s not drinking his own dream juice. And maybe that’s why, all these years later, he still smiles and sways as he plays, happily riding these waves of his own creation.

How is the smell of night different from the day?

The smell of night is different from the smell of day. See, that song is about a mouse, and I’m just trying to imagine a hungry little mouse whose nose is so sensitive that he actually is more in tune with his world from what he smells than what he sees. And I thought an analogy of that might be that he sees the world in smell colors like we see the world with our eyes. I imagine that when dew falls on the grass and the tree leaves it takes on a different aroma, and he can tell just by how things smell whether it’s night or day. He didn’t have to see it.

It has that same sense of duality that’s in a lot of your lyrics, which seems like something you play around with. Why is that?

I love a mystery, and I love leaving an open question. I find that after a few years, if I go back to one of my songs, I’ve changed and I have an easier time identifying with it. Maybe if a listener can identify with a song because of some openings I left rather than define it completely then it’s easier to embrace it. I always leave a little bit of a question mark wherever I go.

I do to a certain extent. I wrote that song about Neptune while ridin’ on a little sailboat, and I became intrigued with the up and down motion of the boat, how regular it was. I was thinking it was as close as a metronome would be for Neptune. If he were sensitive to the waves he would have his own little metronome. Just the feeling that waves are a metronomic force of nature.

It sounds like that was a psychedelic experience for you.

Perhaps. I’ve never understood what “psychedelic” means, anyway. I’ve been accused of it many times, but I don’t know what the hell they’re talking about!

Maybe some of it’s connected to the myth of Silver Apples’ origin, and this story you tell where you have a bunch of guitarists at Café Wha? and just say, “fuck it, I can do it all with oscillators.” I guess my question is, why? What was the impetus for embarking on this journey?

The first time I heard an oscillator I was intrigued. A friend of mine had one and he used to play along with Beethoven. I had an opportunity to play it with a rock record he had lying around and was intrigued. I loved this, and I didn’t have any instrumental experience to speak of. I played banjo a little bit, recorder a little bit, play a guitar. I thought, “maybe I could learn how to play that and be an oscillator player!”

That’s all that occurred to me. I wasn’t thinking of inventing anything or doing anything differently than anybody else. I was intrigued by how that sound worked with a very defined beat, how it swooped in and out. The contrast was great and I fell in love with it. It’s not like I was trying to drive those other guys out of the band or anything like that. I was approaching it from a very warm, loving place, and everybody got all pissed off!

“New music” later became such a catch-all term for anything that defied categorization and genre among New York’s avant-garde, but what I’m hearing is that you didn’t even try to be far out. The old Buchla and Moog analog synth records that reimagined classical music back in the day, repurposing symphonies with classical sound, were a novelty. You never seemed interested in that though. You’d much prefer to reimagine a Navajo ceremonial. It always sounded like very American music to me, for lack of a better word.

Well, I’m proud to hear you say that, because I feel the same way. I didn’t feel like I was out of the mainstream of American music at all. I have a bluegrass background, I was born in Knoxville, my grandmother had bluegrass on the radio all the time. And when I moved to New Orleans I got into the whole rhythm and blues scene there.

If you listen to Fats Domino’s stuff, it’s very simple. Very much like bluegrass. He has a very uncomplicated rhythm structure, very uncomplicated chords. It was the music that I grew up and fell in love with, so my songs are the same way. And I don’t try and do a lot of fancy work with them. Let ‘em tell a simple little story about a simple little event and let it ride.

These symphonies on Buchlas and Moogs, I guess they were an interesting thing for someone who was a scientist or a lab technician performance guy. To me, if I can stand in front of an audience and create some kind of a thing that was flyin’ all around, and Danny’s up there whackin’ on those drums and we get some tribal thing goin’, and girls started jumping up and down and guys jump up and everybody’s having a party with it, that’s what I wanted with it. I never wanted some musicologist down the line saying this has a reference to that.

You wanted the music to bring you closer to people, not further away.

Absolutely. I’m always trying to tune into the people right in front of me. That’s how Silver Apples always was, and still is to this day. The music is maybe a little more complex, but that’s just because I’ve learned how to play the damn thing a little better, you know?

And the damn thing at its most elemental, why did name the instrument after yourself?

Please don’t accuse me of that! That was the record label’s idea of promoting things.

Yeah. I had lots of things I called it, but never my own name.

What were some of the things you called it?

Every curse word in the book. The thing was never in tune right, it was never all working. Still isn’t to this day!

“I don’t see myself on any pathway.”

You made your own instrument because the synths of the time were too heavy and expensive to be portable, and you built it by asking questions and tinkering till you got things right. But so many electronic live acts now take the opposite approach, they just rely on digital playback as a substitution. Why do you think that is?

I really don’t know. I guess I’m a foreigner on that scene as well. I’m so involved with my own little thing I do that I’m not aware of other stuff going on around me. I love it, I listen to it! On tour in the van I listen to everything every musician gives me religiously, and I love it all.

I’m probably the world’s worst music critic because I love everything, and at home I listen to everything from Strauss waltzes to flat-out L.A. noise. So I don’t see where there’s a pathway anywhere, it’s all this big spectrum of what’s going on. Maybe I fit into this one little place over here, but I don’t see myself on any pathway.

I’ll take it, to tell you the truth. I’ve heard musicians say they can’t listen to their own stuff, but I’m not that way. I enjoy my own music, because I’m happy with my little place. 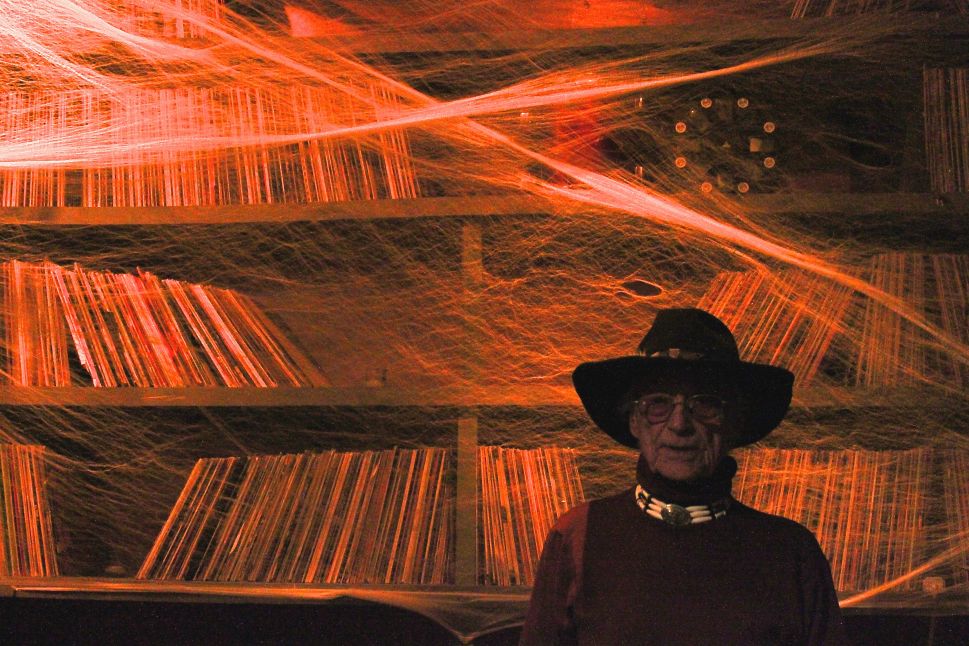