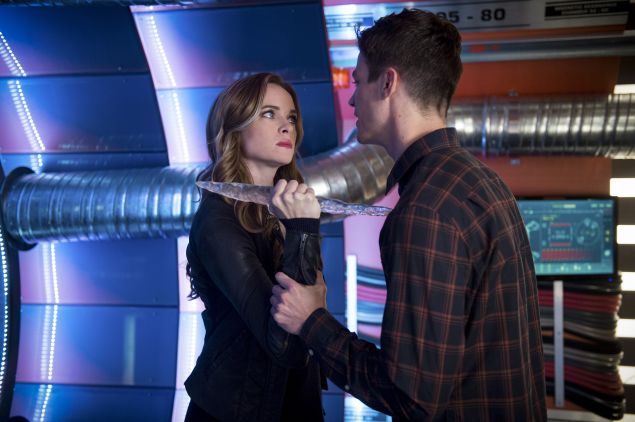 Well…duh, right? Of course Julian Alpert is Alchemy. That’s just how The Flash works (and Arrow for that matter, possibly more so). You introduce a new character, you introduce a villain under a mask and, voila, they’d get away with it if it wasn’t for these meta-ling kids.

No, the shining moment of “Killer Frost”, directed by the forever hockey-jersey’d Kevin Smith, was not the episode-ending reveal. Not by a long shot. The most satisfying aspect of last night’s frost-covered Flash was that everyone–from Cisco, to Caitlin, to Joe–took a step back and realized Barry Allen irreplaceably ruined their lives by altering time and space itself. That our hero acted so, so selfishly has been this season’s 300-pound gorilla in the room, and I’m saying that about a show that once actually had a 300-pound gorilla in the room.

Let’s talk about Caitlin Snow, who thanks to Flashpoint has been slowly turning into her quite literally cooler alter-ego, Killer Frost. From a purely technical standpoint, Danielle Panabaker put in one of her finest Flash performances to date; I love that you can see her eyes not just switch from brown to blue, but from pure panic to icy-coldness. Caitlin, back to Killer, back to Caitlin. Also, kudos to Smith himself, for using a good amount of horror movie trickery to make Caitlin’s transition that much more alarming. For example, KILLER FROST JUMP SCARE:

From a purely, emotionally satisfying perspective, it doesn’t get much better than Caitlin-as-Killer just draggggging Barry for the effects of his time-hopping ways. “What do you care?” she asks him. “You got Iris. You got your happy ending, all of us be damned.”

Say what you will, homegirl might be out here slicing people’s Achille’s Tendons with icicles, but she’s got a point there.

Caitlin’s metamorphosis drags two innocent (well, kind of innocent) victims into the fray: Julian Alpert and Cisco Ramon. Julian’s involvement is more of a literal dragging, with Killer Frost abducting him and heading to a frozen food warehouse which, if anything, is at least incredibly on-brand. But Cisco’s storyline is more of an emotional one; Caitlin, still in full on no-fucks-given mode, reveals that Cisco’s brother Dante was still alive in the un-Flashpoint-ed universe. “Barry is the reason your brother is dead,” she says, her words dripping with ice. Like, actually dripping with ice, yeah, but that’s also just some pure, completely un-Caitlin-like cold-bloodedness.

This comes to a head with Caitlin locked in the Pipeline, but the damage between Cisco and Barry is done. Again, it’s not always easy to pull off the emotional moments of the CW superhero show featuring a giant man-shark, but Carlos Valdes and Grant Gustin mine a lot of sentiment from small moments. “We gonna be okay, you and me?” Barry asks Cisco, towards the conclusion of ‘Killer Frost.’

“You want me to be honest with you?” Cisco responds. “I don’t know.”

Impressive, too, is the climax (for now) of Caitlin’s turn as Killer Frost; the un-Mother-of-Dragons-ing of her hair, if you will. Barry, following a classic Iris West pep-talk, opens Caitlin’s cell and offers her a deal…she can leave, but she has to kill him first. Again, Panabaker is perfect here; from Caitlin, to Frost, to Caitlin again, her eyes finally settling on brown, and the decision NOT to plunge an icicle into Barry’s chest.

Just in time, too, because there’s yet another speedster in Star City (not counting the actual God of Speed, but he’s around, too). Wally awakens from his Sativar cocoon–prematurely, thanks to Joe–and like Rival and Magenta before him he emerges with his Flashpoint-powers intact. But not his mind, not completely, a problem fixed way-too-quickly by a serum Caitlin whips up. What’s the serum? Not very clear! I have a feeling Team Flash and Kevin Smith left a lot of that explanation on the cutting room floor. Either way, Wally is a full-fledged speedster now, and can stop throwing himself into oncoming traffic.

Speaking of getting thrown under a bus (A+ transition), Julian is seconds away from selling Caitlin out to the police when Barry arrives at his hospital bed. Julian has a compromise for Barry; he won’t tell the police a thing, but Barry simply has to quit the Central City police force for good. “You are unfit to be a CSI,” Julian says. “Barry Allen has no place in law enforcement.”

That…is kind of fucked, but Barry takes it all in stride, which isn’t a huge surprise considering A) He’s Barry Allen, uber-Nice Guy and B) His superpower is literally taking strides.

So, finally, we’re left with the aforementioned Big Reveal: Sativar, god of speed, appears before Alpert and instructs him to “Become my servant once more. Become Alchemy.” Which seems pretty clear cut, true, but remember that just a week ago Arrow momentarily tried to convince us that alcoholic sad-sack Quentin Lance was getting so blacked out at night he was able to perform kung-fu across roof tops, so let’s wait and see if Julian Alpert is ACTUALLY the man they call Alchemy. 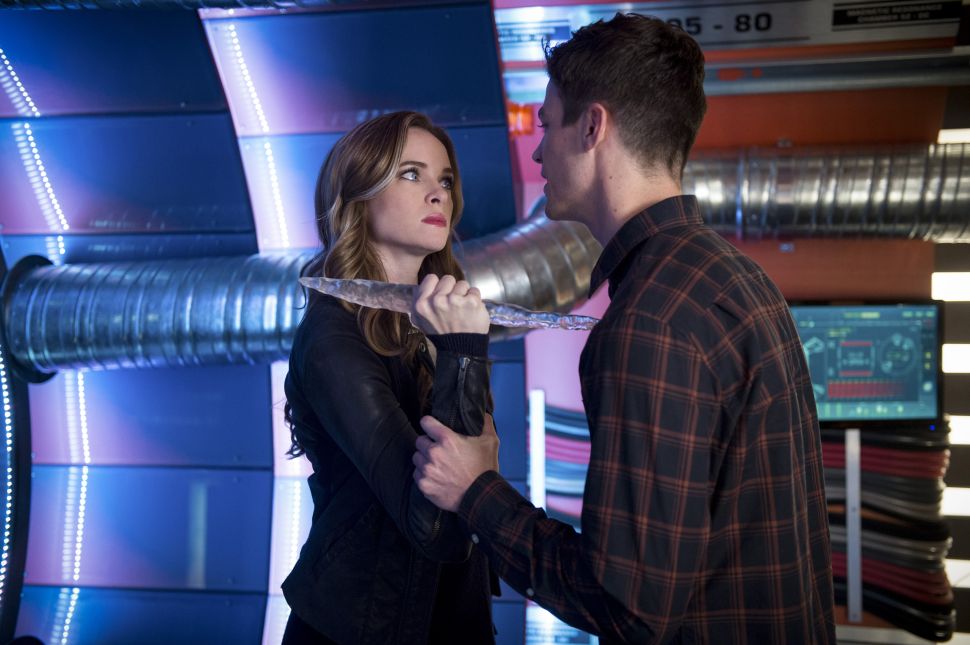