It was right around the moment when Lyla Michaels yelled into a walkie-talkie, “The Dominators have the president!” that I realized last night’s The Flash was something special. I mean, yeah, being part two of CW’s four-part superhero crossover-palooza “Invasion!” (exclamation point one-thousand percent necessary) automatically made the proceedings feel like a big deal. But this was something different altogether; last night’s spandex-clad team-up was — and I mean this as the highest compliment humanly possible — the single greatest example of pure dumb-fun I’ve ever seen on TV. Things like PLOT, or PACING or NARRATIVE SENSE…didn’t matter! There’s aliens! They have the president! No, the real function of “Invasion!”is to serve as the multi-verse’s coolest cocktail mixer between Supergirl, Arrow, The Flash and Legends of Tomorrow, and we’re all flies on the wall. It’s a tapestry of small, charming, perfect character moments strung back-to-back-to-back, not with the purpose of weaving a compelling episode of TV, but with creating history’s most impressive fan-trailer packed with the most GIF-worthy interactions possible.

And oh man, you’re lying if you say it didn’t work. Here’s a GIF right now!

So, here’s the story so far: A race of aliens known as The Dominators, because in space no one can hear you be subtle, crash lands on Central City. They look pretty much exactly like the aliens from Signs without the allergy. The US government has been aware of The Dominators since the 1950s, when the medium-sized green men sent us a message, saying “We pose no threat, human inhabitants” in pretty much the most threatening tone of voice possible. Aliens, as it turns out, are one of those obstacles that even the fastest man alive finds insurmountable, so Barry Allen traverses across miles, time and space to recruit Thea and Oliver Queen, John Diggle, a good portion of the Legends of Tomorrow, and even Supergirl, on loan from Earth-38 (the universe formerly known as CBS).

This, right off the bat, highlights that innate issue that comes with every superhero team-up; that weird, blurry line between which threats require a crossover, and which do not. I mean, Thor assembled the Earth’s mightiest heroes over a brotherly squabble, but then lost Iron Man’s number when an elf was threatening to destroy humanity as we know it. Both Legends of Tomorrow and Suicide Squad? Wouldn’t even exist, had someone just politely asked Superman for help. Even this very crossover, all of “Invasion!”, is a little shaky. The literal Hindu god of speed is teleporting around Central City and Barry’s like, “We got this.” Aliens show up? Call EVERYONE. Travel to a different universe to get ANOTHER alien, stat.

But, again, once everyone’s together, once Kara Danvers swoops in to fulfill her role as the galaxy’s most charming extraterrestrial, once both halves of Firestorm, White Canary and Heatwave’s grumpy ass touch down in the Waverider, once Thea Queen dons the Red Arrow hood for the first time in forever…that’s when the real fun starts. CW’s DC slate is such a surprisingly well-oiled machine at this point, especially compared to the deranged forehead tattoo that is the DC Film universe. It helps a ton that this episode was written by Greg Berlanti and Andrew Kreisberg, who are both basically the reasons any of these shows exist in the first place. These two know these characters like the backs of their hands, and put that knowledge to incredible use in a rapid-fire warehouse scene. Every character quirk, sideways glance and mumbled side-comment is on point. Felicity Smoke finds out Caitlin Snow has powers (“It’s a long story”). Iris West discovers Oliver Queen is the Green Arrow (“that makes him so much hotter”). Kara discovers, well, just what everyone’s name is. Like, she actually goes out of her way to learn everyone’s name. It’s great. Just writing it out, it doesn’t sound that great, but trust me, it’s great.

Really, a lot of this is down to the performances. Melissa Benoist is a literal ray of sunshine that one day decided to take up acting, which is especially prevalent in direct contrast to the constant mumble-grumble that is Stephen Amell’s Oliver Queen. “Don’t hold back,” Oliver tells Kara. “Especially against me.” Oliver Queen’s stubborn ass specifically requesting to get super-punched in the face while he fires arrows at an indestructible Kryptonian is the most Oliver Queen moment that ever Oliver Queen’d.

I was so content just watching these characters bounce words off each other, it was almost a shame when the main storyline butted its way back in. But butt it did, first in the form of a tape-recorded message Barry sent to Rip Hunter, 40 years in the future. “When you come back, don’t trust anything or anyone, not even me”, says future-Barry, still apologizing for the time-ripples caused by Flashpoint. The brothers lost. The daughters turned into sons.

This information comes at the worst possible time for the team (Oliver casually whispering in John’s ear “Hey, apparently you had a daughter” didn’t really help, either), shaking their trust in designated leader Barry just as The Dominators reemerge to kidnap the president. Don’t worry about that too much, though. I can’t stress how genuinely unimportant The Dominators actually are. What matters is the team heads out to do what heroes do –minus Barry and a faithful Oliver.

In a plan that makes only slightly more sense than Lex Luthor’s babble-splaining in Batman v. Superman, The Dominators only captured the President to draw our heroes’ attention. In the words of a horrifying fish-monster who somehow rose in the military ranks to become a general, “It’s a trap.” The Dominators spring a mind-control device on the crew which…actually it’s not really clear why. Just mind-controllin’ for mind-controls sake, as Dominators do. Either way, we get our climactic superhero-on-superhero showdown; Green Arrow and Flash v. All.

There’s a lot to love from this fight, and an equal amount that makes sigh deeply and heavily. Oliver’s “look what ya’ got me into THIS time, Barry” schtick was, admittedly, amazing. But there’s always a problem when you mix and match those who can lift cars over their heads, and those who only use weaponry from medieval times. Of course Oliver pairs off against John, Thea and Sara, while Barry contends with those actually capable of killing someone. And any real stakes are undermined by the fact that, come on, nobody is going to die. There’s a moment when Oliver and Sara square off, while Thea and John just sort of standby watching instead of interrupting the fight choreography with a hail of arrows and bullets.

Visually, though, it’s clear CW skimped on the alien budget to go all out for this episode’s finale. For all this show’s shallow stupidity, it sure does know how to pull off those fuck you comic books are the coolest set-pieces that are more breathtaking than logical. For example…Wally West embracing the newfound speedster in himself and ass-punching his way into the fray:

The drama ends with Barry pulling the old Loki switcheroo on Kara, who destroys the Dominators’ mind-control device. The fight is over, but there’s still a lot to contend with: Cisco is still not, I repeat, NOT over the fact Barry effectively killed his brother. John, though he forgives Barry, still has to grapple with the idea his son was once a daughter. Martin Stein just found out, thanks to Flashpoint, he ALSO has a daughter.

Oh, and the Dominators are still out there somewhere, just Dominatin’. The episode ends with everyone but Barry and a patrolling Kara getting abducted up into the mothership. See you tonight for Arrow (episode 1oo!), where Oliver Queen will undoubtedly shoot a bow and arrow at an actual alien spaceship, and it will work. Just because. Can’t wait! 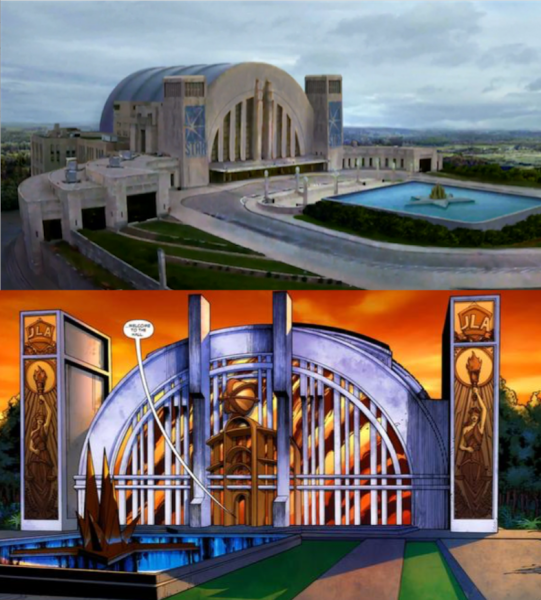 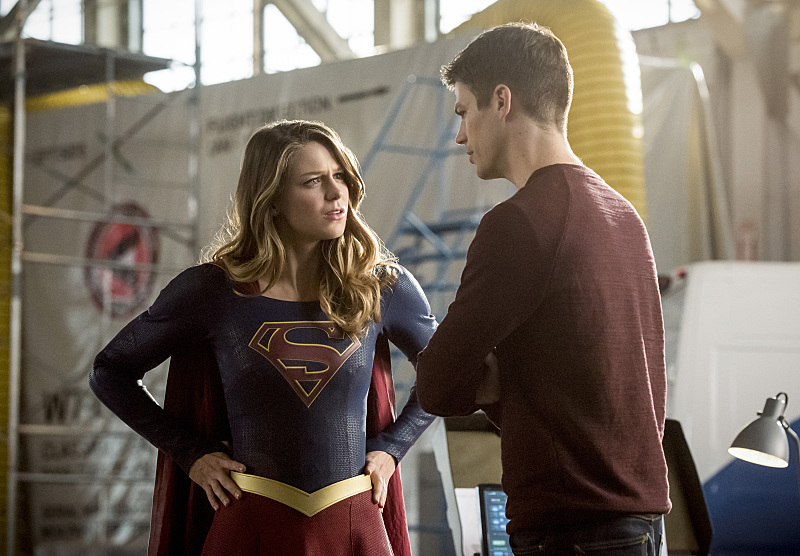