The liberal conniption about alleged Russian “hacking” of our election has reached a boiling point. A politically dangerous Democratic narrative is emerging which posits that it was aggressive Kremlin propaganda that undermined Hillary Clinton’s presidential run—not that she ran a terrible campaign which alienated the white working class to Donald Trump’s benefit.

Like so many half-truths, this narrative contains its fair share of accurate claims. I know, because I was warning the public about Kremlin espionage and disinformation long before Democrats suddenly became passionately interested in the subject because it was hurting their candidate. After Vladimir Putin seized Crimea in early 2014 and began a war of aggression against Ukraine, Russian propaganda efforts aimed at the West went into overdrive.

To anybody acquainted with well-honed Moscow agitprop techniques, this was no more than old-style KGB Active Measures sped up for the Internet age. That said, the threat posed by this online disinformation offensive is real, as I and other experts counseled years ago (in my case, beginning with the defection of Edward Snowden to Moscow in June 2013). However, it was frankly difficult to get the mainstream media interested in this rising problem—at least until the Kremlin’s disinformation machine went after Hillary, as it did in 2016 with gusto.

The Washington Post reported this week that Kremlin-backed websites pushed “fake news” regularly portraying Hillary and the Democrats in a negative light. There’s really nothing new here for anybody who’s followed Russian propaganda for any length of time. Kremlin agitprop aimed at the West—properly termed disinformation—contains an amalgam of fact and fiction, plus lots of gray information somewhere in between which can be difficult and time-consuming to refute.

Back in the 1980s, when the KGB was pumping all kinds of outlandish conspiracy theories into Western media outlets to smear the Reagan administration, Washington got proficient at countering this sort of nasty deception (the Pentagon created AIDS, for instance). The Active Measures Working Group, an interagency entity stood up expressly to debunk Kremlin lies, became effective at its job, drawing on expertise from various government departments and agencies. With Cold War victory, however, it folded along with the Soviet Union.

By mid-2014, it was apparent that Moscow was up to its old disinformation tricks again, and it was obvious to anybody acquainted with the Kremlin that Washington needed to react to the torrents of lies filtering into Western media thanks to Russian intelligence and its friends in the West. Putin, that wily KGB veteran, is familiar with Active Measures, and his Kremlin has become more aggressive about employing it abroad than the Politburo ever was.

There were hardly any veterans of the Active Measures Working Group still on active service by 2014, however, so Washington quietly cobbled together a shoestring effort—no more than handful of experts—to start debunking Kremlin disinformation. Its mission was clear: track Russian lies aimed at the West, particularly falsehoods designed to harm the United States and its allies, then show how they are false.

However, that worthy effort never got off the ground and its website was shut before it went live. The counterpropaganda baby was strangled in the crib—by the White House. As I explained in a column titled “Obama Failed to Fight Putin’s Propaganda Machine,” which appeared almost exactly one year before our election:

Nearly a year ago, the State Department created a Counter-Disinformation Team, inside its Bureau of International Information Programs, as a small, start-up effort to resist Russian disinformation. Consisting of only a handful of staffers, it was supposed to expose the most laughable Moscow lies about America and the West that are disseminated regularly via RT and other outlets. They created a beta website and prepared to wage the struggle for truth online.

Alas, their website never went live. Recently the State Department shut down the tiny Counter-Disinformation Team and any efforts by the Obama administration to resist Putin’s propaganda can now be considered dead before birth. Intelligence Community sources tell me that it was closed out of a deep desire inside the White House “not to upset the Russians.”

Yet again, President Obama’s unwillingness to confront Putin and his regime about anything—Syria, Ukraine, deploying nuclear missiles next to Poland—only encouraged the honey badger in the Kremlin to grow more adventurous and aggressive. By refusing to debunk noxious Russian lies, Obama encouraged Putin to tell more of them—including about Hillary Clinton. This culminated in the Russian intelligence operation which employed Wikileaks as a front to disseminate Democratic emails which had been intercepted by Moscow—as I told you months ago, and which the National Security Agency has recently admitted.

A year ago, knowing that killing our counterpropaganda effort in Washington was certain to beget more Kremlin lies aimed at our country and its institutions, I asked several pertinent questions about why the White House acted as it did:

Who killed the Counter-Disinformation Team and why? What did the team produce during the time it existed? What has become of this product? How many people were on it? Does the State Department not consider countering Kremlin disinformation to be in its remit? Does the White House agree? What about the National Security Council? Is anybody in the U.S. government authorized to debunk Putin’s lies—if so, who? If not, why not?

To this day, nobody has answered any of those questions. Democrats are clamoring for a Congressional investigation of clandestine Russian operations which influenced our election this year, and that’s a great idea. At the outset, they should demand that the White House answer the questions I asked a year ago—they are the logical place to start any inquiry into what went wrong in Washington, and why.

It’s past time to ditch wishful thinking and embrace clarity, what spies term “ground truth.” Russian intelligence interfered with American democracy this year. The extent of its impact on our election is debatable, and may not be fully understood for years. However, the blame for Russian disinformation damaging Hillary Clinton and her party—in particular, the lack of any pushback from Washington, which allowed the Kremlin’s deception machine to go into overdrive—lies not with Donald Trump or the Republicans, but with Barack Obama himself. 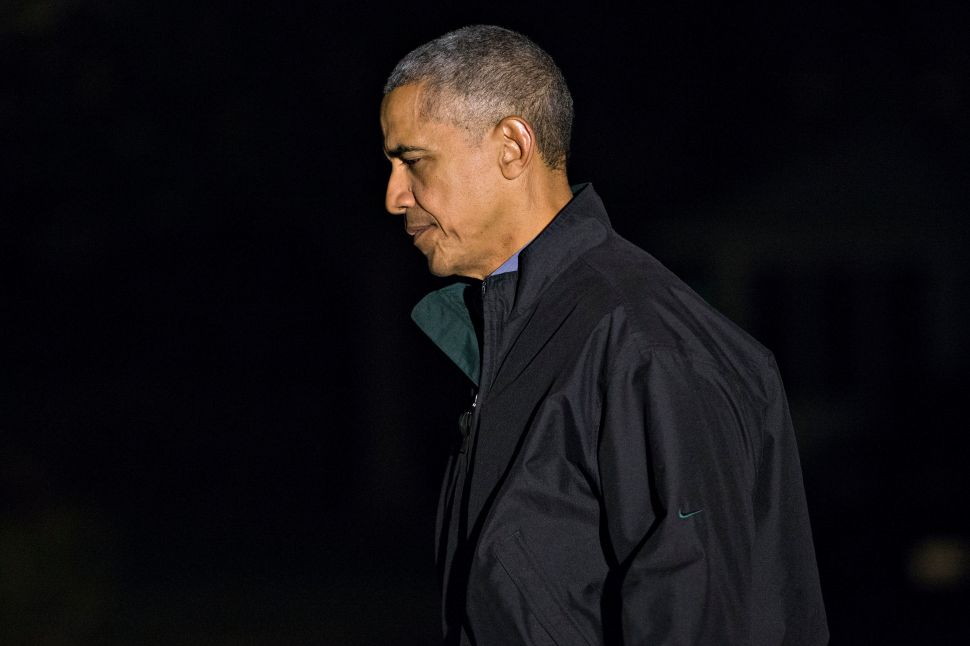