One of my favorite things to study is the working habits of people I look up to. I’ve read about athletes, entrepreneurs, painters, musicians, writers, etc.

And from studying people who were successful in their field, I’ve learned a lot about how they got their work done. A great book to get inspiration about the habits of interesting people is Daily Rituals by Mason Curry.

One thing is sure: Everyone who achieved some form of success, accomplished it by working. But work can happen in many different ways.

And almost all people have different working habits and routines. What works for some people, might not work for other people.

You see a lot similarities, but you also see that people have very specific habits.

For example, in The Philosophy of Andy Warhol, I read that Warhol would just walk around New York City on rainy Sundays. That was one of his favorite things to do, and that gave him ideas and inspiration.

Warhol was an interesting character. He was unique. But he was also similar to the rest of us in the way that he had his insecurities. For example, he hired people to write his books.

One person who didn’t have to do that was Ernest Hemingway. Not only is he one of my favorite writers, but he also had a working habit that I’ve seen with other people who did great work.

One of the most important lessons I’ve learned from Hemingway is this:

That’s from Hemingway on Writing by Larry W. Phillip. That’s one of my favorite books about writing and it’s a good source for inspiration about working habits.

Knowing when to stop.

Do you know the feeling? You have to get work done because you have a deadline, you work on it, you keep working on it, and even when you stop working, you keep thinking about it.

But here’s the problem with being immersed in work: It’s counterproductive.

That makes you less present at home. Plus, maybe even more important, you tire yourself out by always thinking about work. And that’s why you never create momentum.

Instead, stop working at the height of your day.

Hemingway said: “Stop when you are going good.”

That’s one of the hardest things I had to learn.

Have you ever watched a movie where you were thinking, “the movie went on for too long,” by the end of it?

Well, that’s what you do when you work more than you should on any given day.

But the art is to stop exactly at the point where you’re thinking:

Leave it for tomorrow.

Why? Because you always have something to do in that case. It’s easy to pick up where you left the last day.

“But how do you stop thinking about work?”

Recently I wrote an article about thinking in general. And in Hemingway on Writing I found an interesting quote that shows how Hemingway thought about it:

When he’s asked, “how can you learn not to worry?” Hemingway answers:

“By not thinking about it. As soon as you start to think about it stop it. Think about something else. You have to learn that.”

Yes, Hemingway was a practical man. And to be honest, there’s no magic solution to stop worrying and thinking.

I believe that the only way to deal with it is from a practical point of view: You have to learn how to stop thinking when it’s not useful.

If you want to do that by meditation, saying prayers, reading, or running; go for it. The vehicle you use doesn’t matter.

The goal is always the same: Stop thinking when it’s not helping you.

So give this Hemingway method a try. It’s easy; you just know it in your gut when you’re at the height of your day — only thing you have to do is listen to it. And at that point: Stop.

See your life as a movie. Do you really want it to linger on without being interesting? No. A good director knows when to stop. And so should you.

Darius Foroux is the author of Massive Life Success and founder of Procrastinate Zero. He writes at DariusForoux.com, where he uses tested methods and frameworks to share ideas for overcoming procrastination, improving productivity, and achieving more. Join his free newsletter. Get his latest ebook “Procrastinate Zero” and 3 training videos for free.

This article was originally published on dariusforoux.com. 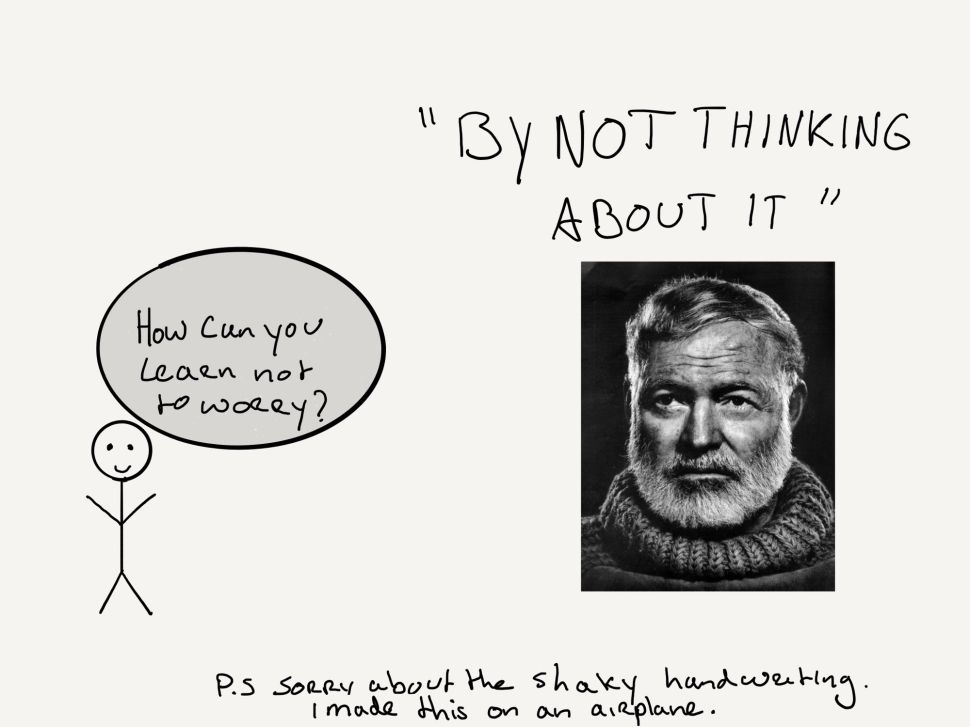