You’d probably say something like this: “You know, that Oscar Isaac-looking guy. Wait. Oh, my god. Was it Oscar Isaac?”

No, it wasn’t Oscar Isaac. It was David Krumholtz. Krumholtz is not a household name. He has a respectable 8,000 followers on his Twitter account, which he’s recently been reusing to retweet weirdos like myself confession to the internet that Bernard the Elf in the Tim Allen holiay classic The Santa Clause was their first crush (yes, Krumholtz was also Bernard the Elf).

He’s been a working actor since 1993 and made in appearance in an astonishing number of beloved films and TV shows. It’s time we finally looked back at a selection of his 10 most iconic roles and appreciated that guy you didn’t even realize you already love.

Thanks to the internet, I know it’s not just me who had a crush on Bernard, the Jewiest Christmas elf physically possible. With his kicky beret and no-nonsense demeanor, Bernard had the vibe of the smartest boy in your middle school who you wish you could’ve played Scrabble in your basement and smooched before your 10 p.m. curfew. Bernard was our sexual awakening, and Krumholtz knows it.

We were all so distracted by the thrilling nostalgia in realizing Joseph Gordon-Levitt was in this that we never gave appropriate attention to the fact that David Krumholtz played JGL’s nerdy guide around school who was thinking of buying a Toyota Tercel.

David Krumholtz was a heartthrob in one episode of Freaks and Geeks where he played Neil’s older brother who had a crush on Lindsay.

The second among many Apatow-adjacent credits (they’re probably friends, right?), Krumholtz was a supporting character in this short-lived series about freshman year of college, which starred Jay Baruchel.

Krumholtz played Goldstein, always seen onscreen with fellow Jew, Rosenberg. The two of them were satellite friends of Harold and Kumar.

Did you know David Krumholtz was in Oscar-winning movie Ray, starring Jamie Foxx? You do now!

Regardless of how you feel about the Whedonverse, the rabid fans of Joss Whedon’s work, or even the show Firefly, you have to admit as a standalone film, Serenity is pretty wonderful. Krumholtz played Mr. Universe, a tech genius who lived alone with a robot wife.

Remember that scene where Seth and Evan go to a party where Seth gets period blood on his pants? Krumholtz played one of the creepy party guys. I think they offered them drugs, maybe. I don’t know—it’s been a while since I’ve seen Superbad.

Krumholtz is definitely tight with the Apatow crew. He’s also in Walk Hard: The Dewey Cox Story, This Is The End and Sausage Party (as the lavash). But not Knocked Up. According to the ever-reliable IMDB trivia page for Knocked Up: “David Krumholtz, who reportedly is a very good friend of Seth Rogen, was supposed to play a character named ‘Gummy’ but backed out because he was offered the lead role in a Woody Allen film. However, the Allen film fell through, and he didn’t get the part for ‘Gummy’ back.”

And here we are—the mid-00s show where a genius with long, dark curls was solving crimes before Benedict Cumberbatch. We once watched an episode of this in my 7th grade math class. I hope Krumholtz got plenty of that sweet, sweet CBS cash because, man, he deserves it.

Oh, and David Krumholtz was also Jeff Daniel’s therapist on The Newsroom! What a prolific working actor. I am very glad he seems to be doing well. 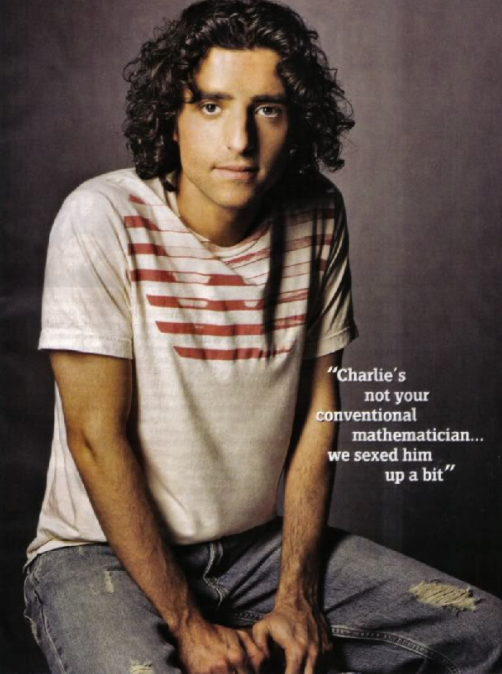