ATLANTIC CITY – The hotels were the same and the swanky parties were the same, but this year’s League of Municipalities conference differed from previous years in one major way. While past years had conversations focused on who the possible successors were for New Jersey Governor Chris Christie, this year the conversation was all about one man: announced 2017 candidate for governor Phil Murphy.

Murphy became the Democratic party’s chosen one earlier this year when he managed to snag endorsements in northern counties and lock up the primary before the other candidates even had the chance to get into the race. Last year, now failed gubernatorial candidates Jersey City Mayor Steve Fulop and Senate President Steve Sweeney were wining and dining colleagues at League parties of their own. This year, there was only one major event: Phil Murphy’s lavish Gatsby-esque party held on the first night of the conference.

Murphy and his wife Tammy were also spotted regularly throughout the conference. Before the Tuesday party, they held a special reception for early supporters. On Wednesday, Murphy had an event with Passaic County Freeholder Terry Duffy at the Irish Pub. Earlier that day, senior advisors for Murphy including Essex County Freeholder Brendan Gill, Murphy’s campaign chief, held a private lunch event with over 70 guests.

While Assemblyman John Wisniewski (D-19), another Democrat, has announced his candidacy, he did not host any parties himself. He made the rounds to various events but Wisniewski never positioned himself as a star in the same way that Murphy did during his Tuesday event. While huddled masses were waiting to cast a glance at Murphy, snag a photo or shake his hand, Wisniewski was being called out by the likes of New Jersey Democratic State Committee Chairman John Currie for daring to cross Murphy’s path.

On the Republican side, the League also featured little in the way of representation. Though Assemblyman Jack Ciattarelli (R-16) has also announced his campaign, like Wisniewski, Ciattarelli did not host an event. The assemblyman has recently kept quiet despite announcing his gubernatorial ambitions in October and being well-liked in his home district.

The picture was even bleaker for likely—though still unannounced—gubernatorial candidate Lieutenant Governor Kim Guadagno. As in years past, Guadagno was slated to end the event on Thursday with a keynote speech at the League’s closing luncheon. That speech was squashed, however, when Governor Christie decided to step in out of the blue and make the speech himself. In all, Christie’s speech featured a lengthy section about how he had every intention of fulfilling his gubernatorial term and remaining in the State House. He also regularly touted the passage of a ballot question dedicating the 23 cent per gallon gas tax to the Transportation Trust fund as a big win for the state. Guadagno was opposed to that measure. Though her name was printed on the programs that sat atop each and every seat in the Sheraton conference hall where the luncheon was held, Guadagno never so much as approached the podium. She claims that she is really proud of the speech she was planning to give and told reporters that the public will get to hear it eventually.

Just last year, Murphy was considered a political outsider, a newcomer angling to get the gubernatorial nomination despite never having held elected office in New Jersey. During Murphy’s League party, one of his key staff members even commented to Observer about the swift change in the gubernatorial race.

For now it seems that Murphy is the odd-on favorite to win the upcoming gubernatorial race, at least if what happened at the League reflects what will happen during the 2017 election. However, with Atlantic City crumbling and recently having submitted to a state takeover, all bets may be off. 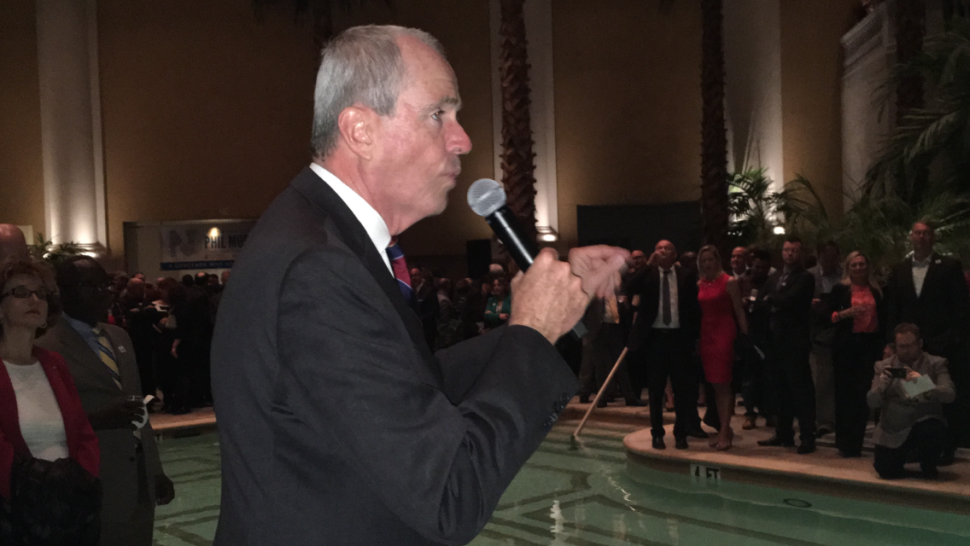