Everyone in the Real World house is now in some kind of couple. Mike and Jordan are physically unable to be filmed separately. And try as they might to slip off into the Seattle underground, the camera crew always finds them like a new client somehow always tracking down the A-Team every week even though they’re a crack commando unit who escaped from prison and should be pretty impossible to find if they really wanted to be. Mike with Jordan is way more entertaining now that he’s not constantly trying to instigate the entire house into a War of the Roses situation. His story about the witch dream from last week lead to the funniest line of the whole season: Mom, I saw the witch again. So I am fully onboard with this couple.

Peter was hooking up with Anna but her sister, Katrina, was supposedly getting in the way. Jenn is DJ Robbie’s ex but they’re friends now. Jenn has a boyfriend at home. But then Jenn and Peter kissed. The way they cast these shows is supposed to be a secret process. Like lots of people audition and you answer all types of questions. But I’ve cracked it of how you get on. If you have ever had a bad breakup but also just met someone new two months ago and you feel like they are absolutely your future then you will get on the show. Over the years, The Real World has killed more two month old relationships than ghosting, and the mutual fadeout, and summer camp ending combined. But so Jenn and Peter seem to really like each other and swear that this has nothing to do with Anna. I don’t know either way, I do know that Peter has a tattoo that says “ROMEO” which means you can’t trust him. I mean unless that’s like a relative’s name, in which case I apologize, but if its a reference to Shakespeare’s play, you gotta get outta there, Jenn. Even though I can appreciate the impulse to get some Bard-inspired ink, because I was once almost got a tattoo that said “FORTUNE’S FOOL.” I am semi-fully onboard with this couple even though I also kind of want to see Peter date every single person in the house this season and break the hookup record instead of sending edible arrangements to his own house.

Tyara and Theo are in this back-and-forth mess of a relationship that I absolutely cannot tell at any point what they are fighting over. Usually, I am very good at sorting out blame but Ty and Theo are the Now You See Me magic tricks of a couple, meaning I won’t even try to figure out how everything is going to play out because I know you’re purposely not giving me all the info I need to make the correct guess. Kassius thinks it’s because Theo has become Tyara’s “man-figure” which is like a father-figure but less George Michaels-y. Theo loves Tyara no matter what even though they can’t sleep in the same room anymore, he still said he’d put “a baby in yo ass” which I’m pretty sure is not where that goes. I am not in on this couple because I don’t understand it and we fear what we don’t know.

Will appears to be in a relationship with some Funyuns, which is fine. Also, last week Will lost his ID and “couldn’t” go to the bar with everyone so he invited a girl over when the house was empty, supposedly to get busy. But two girls showed up, which I think he knew was going to happen because it didn’t seem like a surprise to him. The roommates got home right as the girls got there so he sent them away. But I don’t think this was an actual hookup visit because what do you do with the other girl? Nobody is home and you’re just gonna slide off into your room and leave the friend in the living room alone? Seems suspect.

Anna and Katrina are in their own relationship with each other which seems dope because they got home and started crab-walking down the hallway like the scary girl from The Ring like it was a thing they do often and I would give up all my regular friends for one partner in crime like that.

Anika needs more screen time and I’m not even 100% sure Orlana or Kim live in the same house as everyone else. Kassius, you can just tell probably has a lot going on outside the house that they’re just not showing and it should be its own spinoff series.

Robbie is still the best friend I’ve always wanted. I wish he lived with me and could give me good pep-talks all day and then we could go out dancing at night and wax our eyebrows and I would buy a set of turntables and practice being a DJ while he stands over my shoulder with one of my headphones on nodding supportively. That would be ideal. 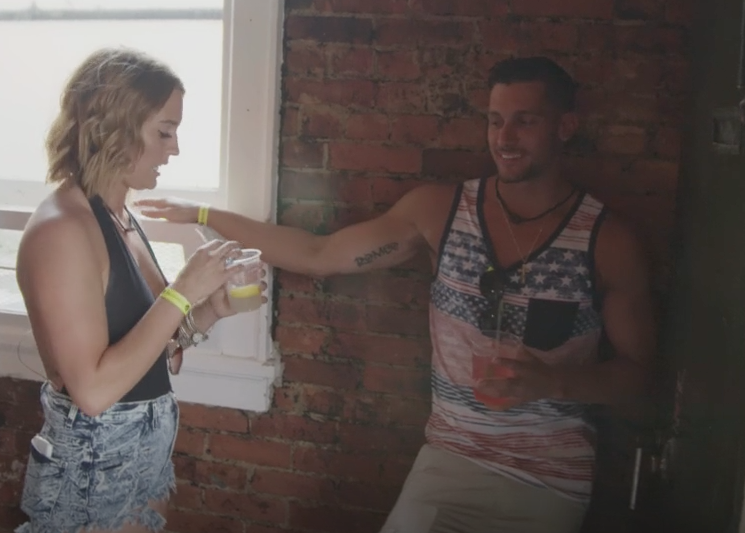