When Roxanne Adamiyatt went looking for a new apartment, she had a few must-haves in mind, beyond mundane concerns like layout and washer-dryer access. Chief among them was her fitness routine. “I’m not a person who does well working out on my own. I need a class to motivate me,” admitted Adamiyatt, an editor at InStyle. “I was also incredibly spoiled moving from the Upper West Side, where I lived but a few blocks from the SoulCycle I took classes at a few times a week. Once you get used to that, it’s hard to give it up.”

Fortunately, Adamiyatt found a building in close proximity to her fitness favorites. “Naturally, when I realized that there was a SoulCycle location two blocks from where I was considering a new apartment, that pretty much sealed the deal for me,” she said.

Real estate insiders have caught on to the fitness lifestyle trend, and how much it matters to buyers and renters as they evaluate neighborhoods and properties.

“People’s approach to wellness is very personal,” Anna Zarro, the director of residential sales and leasing for Extell, told the Observer. “People are wearing athleisure—I think the focus on fitness has really taken over.” At Extell’s 70 Charlton, “we tend to see people with a more active lifestyle,” Zarro said. “Physique 57 recently opened up nearby,” she said. “And the Dogpound, a boutique boxing and training studio.”

At the same time, developers acknowledge that a few treadmills and ellipticals in the basement simply won’t qualify as an onsite gym.

“We’re pretty emphatic that we have to have gyms in our buildings—it’s a requisite for us,” Related Companies executive vice president Bryan Cho told the Observer.

Equinox is a subsidiary of Related Companies, and the partnership means a number of Related properties are located adjacent to the luxury gym—an amenity appreciated by a number of its residents, like Leslie Zuckerwise, who moved into Related’s rental the Easton, at 205 East 92nd Street, with her husband this August.

“When looking for an apartment, there were a couple of deal-breakers for us, and one of them was that a gym needed to be in the building, or really close by,” Zuckerwise told the Observer. “Both of us work incredibly hard, and finding gym time isn’t easy. Having the gym close and accessible was pretty important to us.”

Enter the Easton, where the lavishly outfitted Equinox is reachable both from the street entrance as well as through the building itself.

“I knew I wanted somewhere that was aesthetically appealing,” she said, “I don’t always like working out. I’m tired, because it’s usually early in the morning or late in the day, so you want a place that you look forward to going to. It’s pretty, it’s clean, the people are nice and the music is great—it’s upbeat!” she said happily. “Once I drag myself in there, I’m like, ‘This will be O.K.! It’ll be a nice experience.’ ”

Stribling broker Alexa Lambert echoed Related’s Cho about the primacy of onsite workout facilities. “Amenities have caught up with finishes,” she told the Observer. “You can’t just have a gym, and you can’t get away with doing it cheap.”

Lambert worked with the Naftali Group designing condo buildings at 210 West 77th Street, 221 West 77th Street and the Shephard, at 275 West 10th Street. “We spend time with architects talking about if gyms should be wood-paneled, how the lighting should be and we meet with equipment experts. We want these places to be used,” she said, “and be beautiful, and reflect the building and help sell the building.”

Gone—or at least going—are the days of the neglected, poorly lit gym. “People are using amenities much more than they used to because amenities are much nicer than they used to be,” Lambert stated. At the Shephard, “Our gym has this dark herringbone wood up the wall,” she said. “It’s cozy, it’s stunning and it’s gorgeous.”

Still, Lambert notes that developers need to be attuned to the neighborhood, and how it impacts the way potential residents view fitness amenities. In the West Village, for example, people simply like to be out. “At the Shephard, the pull is what is right outside the front door. The West Village has so much—it’s one of the best neighborhoods in the city to have access to, with these cool, sporty activities and shopping and restaurants—amenities are just icing on the cake.”

Such was the case for Natalie Jackson, a West Village resident who grew up in New York and is now a broker at Douglas Elliman. She spent her college years on the West Coast, and “picked up boxing in L.A., which is my main form of exercise,” she said.

Earlier this year, Jackson had to move, but she decided to stay in the neighborhood, close to Gotham, her gym of choice. “Gigi [Hadid] and other models frequent it. I also go to classes such as SLT and SoulCycle—the ones in the West Village,” she said.

Others prefer the Dogpound, at 1 Renwick Street and adored by Victoria’s Secret Angels. For Nicolas Ibanez, who recently made the transition from the Upper East Side to Hudson Square’s 15 Renwick, it was a game changer. “I basically moved to Dogpound,” he joked. “I’m so glad we have this at our doorstep!”

The multitude of fitness boutiques favored by Ibanez and Jackson are especially helpful for those smaller-scale, boutique condo buildings that have chosen to forgo internal gyms, like 42 Crosby.

“We have noticed [studios] popping up everywhere,” Tim Crowley, the managing director of innovation and design at CORE, which is handling sales at gym-less 42 Crosby, told the Observer. Adding a gym to the boutique 42 Crosby simply didn’t make economic or practical sense, in his opinion. “We have found that if you provide a small gym, in a small building, in a great location, that no one will use it,” Crowley commented.

“Fitness, once a perfunctory and solitary pursuit has become a social experience. In today’s environment, you are just as likely to meet a friend for a class than you are to meet that friend for a beer,” Crowley added.

“I know that Tracy Anderson classes are kind of like group therapy,” Zarro said with a laugh, echoing Crowley’s sentiment. “People like to socialize with likeminded individuals.”

Well, not everyone. For Rachel Trenchard, who moved into a rental at 7 DeKalb Avenue in Downtown Brooklyn earlier this year, the luxurious and well-equipped fitness facilities made life a whole lot easier.

“It was an added bonus, for me—I canceled my gym membership because it has the same amenities, and it’s so much less busy! It’s been fantastic. It has the right lighting for it, it has more of the feel of an actual gym, and not just a room,” she said.

“I’m usually the only person there, or one of two people,” she told the Observer. “There’s never a fight for equipment,” she said contentedly. 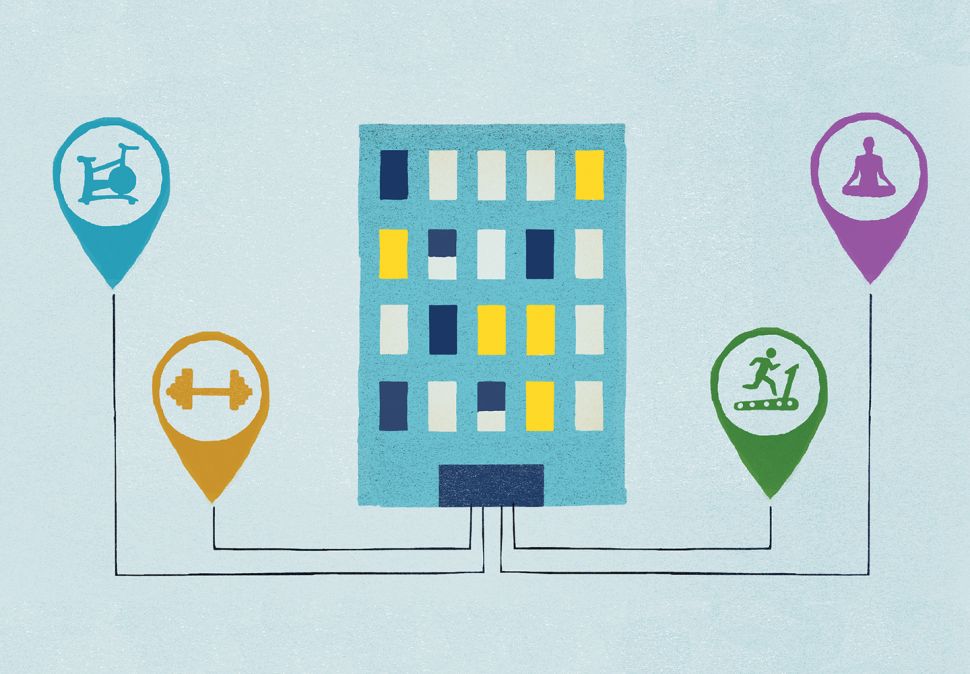