First let me thank my family, my friends and a great campaign team for helping us achieve a historic upset victory that the so-called experts predicted would never happen.

In many ways, the odds were stacked against us. They always are when you challenge the status quo. But in our great country, the last word goes to We the People. And we the people have spoken.

This has been a long, agonizing campaign. I think I speak for all of us—liberals and conservatives, Democrats, Republicans, and none of the above—when I say this: Thank God it’s over.

There were times when it seemed like it would never end.

That it was all heat and no light.

That serious issues took a back seat to mudslinging.

But, behind the sound and fury, behind the personal cheap shots and scandal-mongering, something much more important was going on.

You, the American people, were concerned and, yes, angry about where our country was headed. You sensed, you knew that, for too long, we’d been drifting in the wrong direction, as those in power kept on playing politics as usual.

Well, the results are in.

You said no to the same old, same old.

You said no to the politics of privilege.

And you said yes to turning government back into what it was always meant to be: Not the servant of a privileged elite, but the fair and equal protector of each and every one of us.

Nothing says it better than our Pledge of Allegiance: “One nation under God, indivisible, with liberty and justice for all.”

That’s the America that as president I pledge to strengthen, to honor—and to heal.

There’s so much we share in common: We all want to make America stronger, safer and more prosperous.

We all want an America that is united at home and respected around the world. We all want to fix what is broken—not just broken government, broken foreign policy, broken trade policy, broken immigration policy, a broken tax system and a broken economy—but also the broken lives of too many of our people.

We believe in the American Dream, the dream Ronald Reagan once described as a “shining city on a hill.”

And, President Reagan, if you’re watching tonight, I promise you: Just like you did, we’re gonna make that city on a hill shine again. Believe me, folks, we can do it.

But we don’t have time to waste. The campaign is over and the time to govern starts now.

So here is what I promise you:

First of all, no more witch hunts and distractions.

During the campaign, I made it clear what I thought about my opponent’s criminal acts. I stand by that. But two wrongs don’t make a right. In the spirit of President Gerald Ford, who helped salve a wounded nation after Watergate, I will preemptively pardon Hillary Clinton for “all offenses against the United States which she…has committed or may have committed or taken part in.”

The court of public opinion has rendered its verdict, and that is punishment enough.

Starting tomorrow, I will begin putting together an all-star cabinet to help me serve you, the American people. I will choose the best men and women America has to offer: Republicans, Democrats, independents, you name it. But only the best:

The best military to defend our freedom and hunt down the terrorists who threaten our Judeo-Christian-Muslim values.

The best trade negotiators to negotiate better deals that protect American workers without being protectionist.

The best resources for law enforcement to make our communities—especially our suffering inner cities—safe again. Because all lives—black, white, red, yellow and unborn—all lives matter.

We will also provide police with the best training and invest in the latest nonlethal weaponry, because we can have law and order and lower the chances of police making deadly mistakes.

We’ll choose the best judges—judges who understand, respect and uphold the Constitution of the United States.

I’m looking for the best leaders from business and labor and, most of all, the best representatives of Main Street, not Wall Street…the workers, the volunteers and spiritual leaders, the entrepreneurs who are the backbone of our economy and our society.

I will enlist the best talent to reform our failing public education system. It costs billions of dollars but lets down too many of our kids. Too many young Americans leave high school and college unprepared to earn a decent living in the real world. We will fix that. The fact that some kids learn from new textbooks and write code on state-of-the-art computers while others must put up with tattered, outdated textbooks and lack any computers is a national disgrace. I plan to do my part by adopting a public grammar school in my hometown borough of Queens, N.Y., and I will encourage other fortunate people to do the same.

This is right and makes business sense. Without a well-educated workforce, how can we compete with other nations?

To kick-start our lagging economy we must cut government red tape, bad regulations and power-grabbing executive orders—orders that we the people never voted for in the first place.

Starting on day one, those orders will be history.

Too often, working hand in hand with corrupt government officials, developers—and I know what I’m talking about here—misuse eminent domain to seize private property for private gain rather than public good. It’s always been wrong. The time has come to make it illegal.

And I promise to back up the men and women who protect our battered borders with the best training, the best resources and, yes, the best wall it takes to do the job. Because a nation that fails to protect its borders is failing to protect its people. And that’s got to stop.

I want to state loudly and clearly that, as president of all the people, I will never tolerate hatred spewed against anyone—Jews, Blacks, Hispanics, Muslims or any other group.

I’m here tonight because I heard your voices and I share your concerns and your dreams.

I don’t care about your party label, where you come from or the color of your skin. I don’t care how you voted in this election. I don’t care if you are gay or straight, an evangelist or an atheist. As long as you’re a loyal, legal American citizen, starting tonight, we’re all on the same team.

My job for the next four years is to serve all of you to the best of my ability. To serve, as Abraham Lincoln once said, “with malice toward none, with charity for all.”

During this remarkable campaign, I’ve met many hard-working Americans who work at two, three jobs, yet they still struggle to pay rent, afford health care, put food on the table. And many of you have told me that you feel as if you just can’t get ahead. Even before I take office, I pledge to visit some of the country’s most blighted communities, from the streets of Watts to the hollows of Appalachia, so I can hear more about your struggles, understand them better and then attack the stubborn cycle of poverty.

The White House is known as “The People’s House.” But it hasn’t always operated that way. Rather than meet only with legislators aides and lobbyists in Washington, D.C., four times a year I will hold private meetings with regular citizens, who will be chosen by lottery, to discuss the issues that concern them.

All my life—and as a businessman, believe me, I’ve had my ups and downs—I’ve never given up, never lost sight of the future. I’ve always believed in tomorrow. Not out of blind optimism. Not out of some child-like faith in happy endings. But because I believe in overcoming obstacles and making things better.

But I’ve also learned from them.

No candidate can control what every single supporter says or does. I don’t believe in censorship or political correctness. But I do want to state loudly and clearly that, as president of all the people, I will never tolerate hatred spewed against anyone—Jews, Blacks, Hispanics, Muslims or any other group. My daughter is Jewish. My grandkids are Jewish. When an idiot yells “Jew-SA, Jew-SA” at one of my rallies, I consider it a personal affront to my family. When a black church burns in Mississippi, I mourn. In the heat and bustle of the campaign, I may not always have repudiated such vile and violent behavior quickly or forcefully enough. I do so now, and I won’t let it happen again.

Also, I profoundly regret my shabby treatment of the Khans. They lost a son who died for this country, and I should have honored them not attacked them for criticizing me.

Learning from my missteps during this campaign has made me a better person. And one thing I’ve learned for sure, the meaning of a word some of you probably didn’t think was in my vocabulary: humility.

And so, my fellow Americans, it is with a truly humble heart—but with pride and confidence in this great land of ours—that I thank you for making this victory possible.

To those of you who contributed to this victory, thank you from the bottom of my heart.

To those of you who hoped for a different outcome, I say thank you for doing your civic duty.

To all Americans, I solemnly pledge to serve and protect you to the best of my ability.

And, to that end, I ask for your prayers to give me the strength and the vision to get the job done.

Aram Bakshian Jr. served as a White House speechwriter for Richard Nixon and Gerald Ford and as director of presidential speechwriting  during Ronald Reagan’s first term. 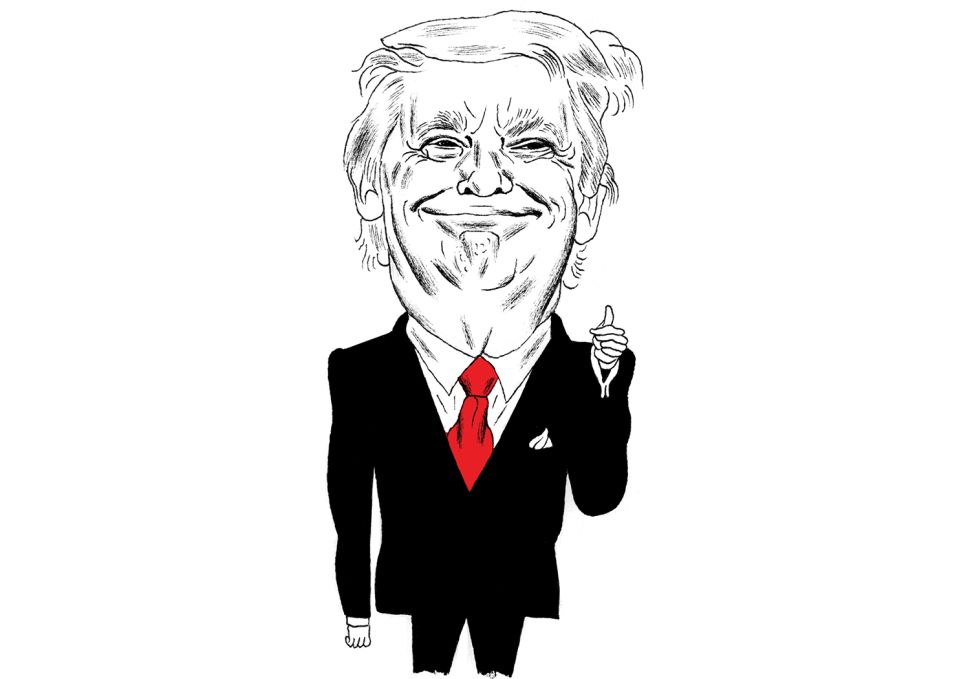