A month ago, Parlophone released the second volume of its excellent box set series chronicling the career of David Bowie.

Entitled Who Can I Be Now? [1974-1976], this 14-disc collection offers the most exhaustive and complete overview of this particular period of the singer’s career, where the ashes of Ziggy Stardust gave rise to the alien soul man known as the Thin White Duke, augmented by three of his best studio albums in 1974’s Diamond Dogs, 1975’s Young Americans and 1976’s Station to Station along with the two live albums representing the era: David Live and Live Nassau Coliseum ’76 as well as a disc of rarities entitled Re:Call 2.

However, the real get in Who Can I Be Now? is The Gouster, the original intention of the 1974 studio sessions in Philadelphia that would become Young Americans. At seven tracks, it’s a beautiful homage to the soul music hemorrhaging out of the City of Brotherly Love at the time, evidenced on a radically different version of the 1972 single “John, I’m Only Dancing”, the box set’s title track and, of course, “Young Americans” (replete with some of David Sanborn’s best sax work on a rock LP and Luther Vandross on backing vocals).

But The Gouster wasn’t the only Bowie album from this period presumed “lost” at the time.

Bowie was also believed to have secretly recorded a soundtrack for Nicolas Roeg’s dramatic sci-fi masterpiece The Man Who Fell To Earth, celebrating its 40th anniversary this year in the form of a theatrical re-release across select theaters in the United Kingdom, alongside, at least, according to Amazon UK, a DVD reissue which was just released.

The film will also finally be available stateside: the Limited Collector’s Edition of The Man Who Fell To Earth arrives on Blu-ray Combo Pack (plus DVD and Digital HD) January 24 from Lionsgate and includes never-before-seen interviews, brand new artwork, a 72-page bound book, press booklet, four art cards and a mini-poster.

“After completing work on the movie soundtrack of The Man Who Fell to Earth, [Bowie] was supposed to take a holiday until the New Year,” the New Musical Express mistakenly reported in a story on Station to Station that ran in the January 15, 1976 issue and reprinted in the liner notes to the Who Can I Be Now? Set.

In his 2005 book for the 33 1/3 series on Bowie’s 1977 LP Low, author Hugo Wilcken alleges that some of the material that appeared on the first installment of the singer’s celebrated “Berlin” trilogy was initially brought to Roeg for use in the film, which the director found unsuitable in the context of the story’s tone. If true, that explains the side-profile image of Bowie as Newton used for the album’s cover art; that would make it the character’s second appearance on a Bowie record behind Station to Station.

But as it turns out, a soundtrack does, in fact, exist for The Man Who Fell To Earth, and Universal Music Enterprises has given it a beautiful overhaul in the form of a two-CD, two-LP deluxe box, marking its very first commercial release.

The man responsible for the coordination of the music featured within was John Phillips, the former charge of California pop icons the Mamas and the Papas who kicked off his own underrated solo career with the 1970 release of his debut John Phillips (John, the Wolf King of L.A.).

Outer space had become somewhat emblematic of Phillips’ post-Mamas career; the viewing of the 1969 Apollo 11 lunar landing inspired him to work on a space-themed musical co-written with his third wife Geneviève Waïte, which he tried to get the likes of Jack Nicholson, Barbra Streisand and George Lucas (who Phillips alleged was inspired to create Star Wars after reading the script) on board for a film version of the play, originally titled Space.

It became Man On The Moon after attracting Andy Warhol and his longtime collaborator Paul Morrissey to come aboard as producer and director, and the stage show—about an American astronaut hoping to save the universe from a bomb planted on the moon by a mad scientist—received a modest run of 43 preview performances at the Little Theatre on West 44th Street (now the Helen Hayes Theatre) only to close curtain two days after opening night in early 1975 following an avalanche of horrible reviews that emerged over 48 hours’ time.

Shortly thereafter Phillips moved to London, where he was commissioned by Roeg to create the music for The Man Who Fell To Earth.

Hunkering down at Lansdowne Recording Studios, Papa John called upon his pal Mick Taylor, whom he worked with alongside Mick Jagger, Keith Richards and Ron Wood to record material for a second solo album that was to be released on Rolling Stones Records, to come up with music for the movie.

Any fan of solo John Phillips will absolutely love this material, even though a couple of the cuts (namely “Liar Liar” and “Hello Mary Lou”) have been previously released as bonus tracks on the 2008 Varese Sarabande compilation Pussycat, which also presented the album he recorded with the Rolling Stones in its entirety.

Meanwhile, the tunes in which Phillips sings lead vocals (“Boys From The South” and “Rhumba Boogie”) rank right up there with “California Dreamin’”, “San Francisco (Be Sure to Wear Flowers in Your Hair)” and “Me and My Uncle” as some of the finest work of his catalog in the way they perfectly capture the spirit of American music in a way that’s both skeptical and celebratory.

For the extraterrestrial side of this story, contributions by renowned Japanese progressive rock great Stomu Yamash’ta were selected from his own recordings from the time, and serve as an excellent primer for the exploration of an amazing and underrated figure in modern composition who found an amazing middle ground between Mahavishnu Orchestra and Can. If you haven’t been exposed to the music of Yamash’ta, let this soundtrack be your guide.

Both “Mandala” and “Memory of Hiroshima” come from 1973’s Kabuki jazz masterpiece The Man From The East, while an edited version of “Poker Dice” and “One Way” both appear on 1972’s Floating Music, the percussionist’s Island Records debut.

“Wind Words”, meanwhile, comes from 1973’s Freedom is Frightening, an album containing some of Yamash’ta’s most progressive material with assistance from Soft Machine bassist Hugh Hopper and guitarist Gary Boyle of the Brian Auger Trinity. The trance-like, cymbal-heavy “33 1/3” is by far the most experimental track off 1975’s Raindog, a more conventional album that otherwise featured pop vocals from acclaimed actor Murray Head and English R&B diva Maxine Nightingale.

There’s also a handful of stock music interspersed between the original material on this soundtrack as well.

Standards like Jim Reeves’ “A Fool Such As I”, The Kingston Trio’s 1965 take on “Try To Remember” from the musical The Fantasticks, Louis Armstrong’s version of “Blueberry Hill” and Canadian composer Robert Farnon’s holiday rich rendition of “Silent Night” provide distinctive sonic context for the Earth that Thomas Jerome Newton had fallen to in the first place, offering a strange sense of gravitas to the esoteric push-pull between the musics of Phillips and Yamash’ta.

Roy Orbison, Steely Dan, Joni Mitchell and Bing Crosby also all made aural cameos on screen, but were not included in this collection.

And while Phillips might have a beef with George Lucas over the concept of Star Wars, it surely must have burst the American Graffiti director’s bubble a bit when he heard elements of Gustav Holst’s “Planets Suite Op. 32” performed by the Bournemouth Symphony Orchestra as the background of Roeg’s sci-fi drama. The century-old orchestral suite served as the primary influence of John Williams when he was scoring Episode IV: A New Hope.

While we may never know the true fate of those “lost” Bowie albums from the mid-70s, reveling in the long overdue audio compendium to the film that made David Bowie an icon of both sound and vision should be of great solace nonetheless.

It might not be Ziggy in the cut, but Nicolas Roeg could not have picked a better mind to score his humanoid tragedy than John Phillips, a man whose transgressions outside of the studio should not be allowed to sully his highly underrated genius behind the mixing board. 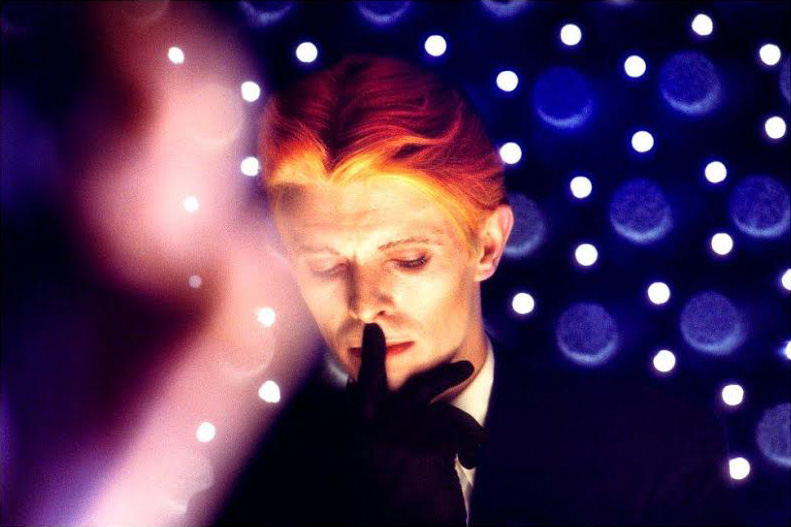