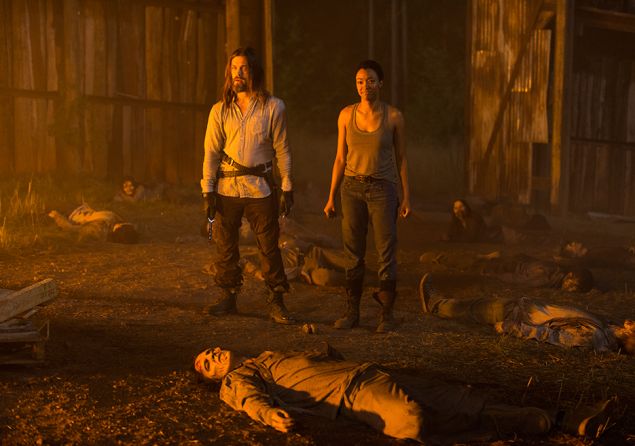 Continuing its ongoing seminar on different kinds of leadership, this week The Walking Dead gives us an in-depth look at a truly bad ruler: Gregory of the Hilltop Colony. Unlike Negan (who is evil but ruthlessly effective) or Ezekiel (a charlatan but a good leader), Gregory is a venal weakling, a coward who uses false concern for his people to cloak his own desperate need for self-preservation. He’s the very essence of a terrible leader, and his near-total lack of moral fiber is about to put two of our heroes in the line of fire.

Namely Maggie and Sasha, who arrived at the Hilltop straight from the scene of their significant others’ murders. The whole reason for that fateful expedition, you’ll recall, was to get an ailing and pregnant Maggie to the Hilltop doctor. Now he’s patched her up, and the baby is safe, but he wants to keep her there for observation until she gives birth.

But nope, sorry kids, saith ruler Greg. Risky pregnancy or no, “Marsha” (Gregory has literally the world’s worst memory for names) isn’t a Hilltop citizen and so she and Sasha need to gtfo. Jesus and Sasha try to sway him, but he’s pretty steadfast—because their presence there puts the Hilltop at risk.

Seems Father Gabe’s ruse with the grave last week wasn’t just to throw a horny Negan off the scent of a recent widow. Hiding the fact that their two communities are in contact preserves Alexandria’s alliance with the Hilltop, which was predicated on Rick & friends’ attack on the Savior compound. If Negan knew Alexandria had exterminated his people at Gregory’s request, he’d take it out on the Hilltop, sinking the alliance and cutting off Alexandria’s access to things like medical care. Gregory’s worried they’ll find out and try to kill him (again) and make life harder for his people, who have a relatively sweet deal with the Saviors.

Negan probably suspects there’s a connection there—he’s just not sure. So he sends his second-in-command Simon to beat the bushes a bit. Maggie and Sasha wake up in the middle of the night to find the gates busted open, huge bonfires in courtyard, and a car playing loud music—basically a huge walker magnet that get the colony overrun in a matter of minutes. Everyone else in town…seems to not have noticed yet. Maybe they’re confused by the fact that the Saviors have nailed their doors and windows shut.

Sasha climbs out of a skylight and starts killing walkers, joined soon by Jesus (who for some reason still seems to think the best way to fight zombies is with karate kicks?). But the music-blaring car is locked up tight. So Maggie, very much against doctor’s orders, climbs out, hijacks a tractor and runs over a bunch of walkers and the car, killing the music.

Our hero! Is something a normal person would say. Instead Gregory is like, um, thanks for the assist, here’s some homemade jam to remember us by, don’t let the broken gates hit you in your sickly pregnant ass on the way out! Jesus and Sasha intervene again, but they’re interrupted by the arrival of the Saviors. So they hustle Maggie and Sasha into hiding just in time for Simon to burst in and start strutting around, tossing out vague suspicions and vaguer threats. Gregory puts his lack of backbone on full display, finally deciding that the only way to placate these guys is to give up Maggie and Sasha as a sign of good faith. (And there’s a deliberate echo here of Rick giving up Michonne’s gun last week as a similar sign of good faith—a suggestion that Rick’s become nearly as bad as this pathetic douche.)

Luckily Jesus has stuck Maggie and Sasha in a different closet, and Greg is forced to cover by giving up his stash of top-shelf scotch. After the Saviors leave—pausing on the way out to make Gregory kneel to them—he blows his top at the insubordination. But Jesus calmly threatens a coup, and Greg realizes his position isn’t quite as secure as he thought. Sasha and Jesus start hatching a plot to install Maggie as the new head of the Hilltop. And while they’re at it, Sasha suggests that Jesus use his ninja skills to track the Saviors’ convoy back to Negan to learn where their true base of operations is.

Meanwhile the B plot is basically just two teenagers taking a long walk.

Enid, who somehow over the course of two episodes last season decided that Maggie is the most important person in her life, decides to hike to the Hilltop to see her. And separately, Carl, consumed with revenge, sets out to find Negan and kill him and damn the consequences. And they make their way to the Hilltop, walking, and then finding some roller skates and skating, and then walking again for some reason—did the skates fall apart? Then Enid sneaks into the Hilltop and finds Maggie, and Carl sneaks onto a Savior truck, where he runs into a similarly-minded Jesus.

Except that Jesus is there on a reconnaissance mission, while Carl just wants to kill Negan with no exit plan. The difference between their motives is essentially the theme of the whole episode: How do the dead want us to deal with their loss? Do they want us to mourn? To feel guilty? To avenge them? Or do they want us to move forward?

Carl can’t see past his own sadness and survivor’s guilt; he’s fixated on the past, on pain and vengeance. But Sasha doesn’t send Jesus out to kill Negan, but as a first step in possibly getting out from under his thumb. Sasha and Maggie and Enid all come to understand that the best thing they can do for the dead is to become a testament to the lives of those they lost, to use their memory as a spur to live more fully.

Gregory may be a cowardly dickhead, but he’s onto something when he insists that his people don’t bury their dead. (For all of its flaws, one of the best things about The Walking Dead is how thoroughly it refuses to deal in absolutes: Negan is evil but he’s not wholly in the wrong, and Gregory is a gutless idiot but he’s never quite mistaken, either.) Jesus explains: “The idea was just to keep going.”

By the end of the episode, Enid is insisting on marking Glenn’s grave with her green balloons, but Maggie realizes what Jesus was getting at. Instead of leaving Glenn’s pocket watch on his grave, she gives it to Enid, passing it forward onto the next generation. “We don’t need anything to remember ’em by. We have us.” Glenn lives on in her—in the child they’ll have, but also in the person she is now. Which is why it’s significant that this is when she fully claims her married name. Gregory’s inability to recall names is played for laughs all episode long, but it is profound and thrilling when, after giving him a good right hook across the face, she tells him that from now on he’d better know that her name is not “Marsha,” or “honey,” or “dear.” It’s Maggie Rhee.

And this is when she starts talking about Glenn as a person, not a loss, or a body. It’s the crucial difference between grief and mourning. But Carl is still stuck in the former. As is Rick, who is just as blinded, if not quite so reckless. He’s also hung up on grief and guilt and can’t see a way forward. And even Gregory knows that’s not the way to go. 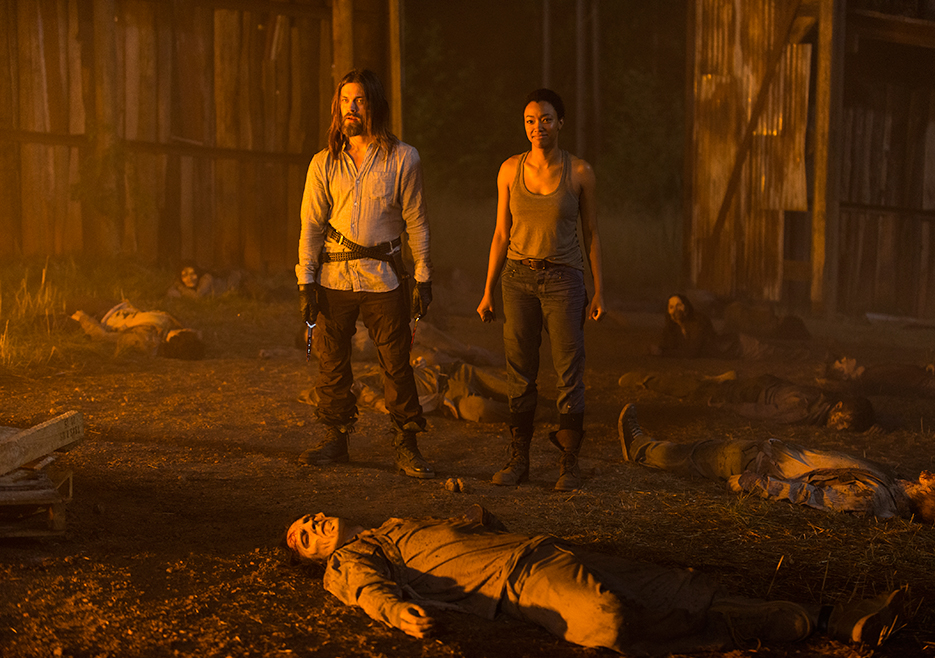