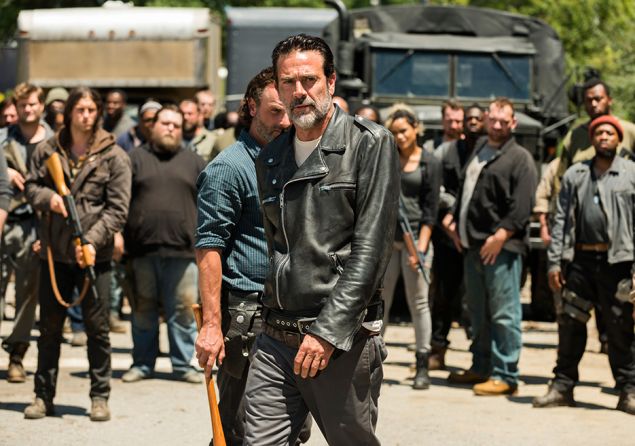 New theory: The writers of The Walking Dead somehow anticipated the events of our current news cycle and created a plotline specifically to prepare us for it. To help us (or those of us who didn’t see this coming) bear up emotionally under an unsettling new world order.

OK, so I don’t think the show creators are actual prophets; they just happen to be very good at torturing their audience—a talent that aligns them surprisingly well with the current American liberal zeitgeist. Lord knows it’s difficult to watch characters argue whether “this is our life now,” and “we just have to accept this,” to see them pinging between frustrated resistance and despondent resignation and not hear echoes of current events. Certainly Rick’s face, swollen and bleary, has that look of being gutted and incredulous at once that I saw in many of my friends this past week.

These parallels exist here not because of any screenwriters’ clairvoyance, but because this season is shaping up to be a seminar on power and control, as obtained and maintained by a violently charismatic leader. And at least we can take some small solace in the fact that whatever indignities and horrors could be visited upon our nation in the coming months and years, none of them will be quite as bad as the tortures and humiliations carefully constructed by Negan.

Because if this week’s episode, “Service,” makes anything clear, it is that Negan has a plan. He’s plotted out the steps needed to bring a community like Alexandria to heel, to keep them calm and compliant as he solidifies his ownership over their lives, their bodies, their homes, and whatever they own. And everything he does is part of this campaign of psychological warfare.

For example, after saying he’d be at their gates in a week to accept their offering of half of their stuff, Negan shows up a little early, before they’re ready for him. Because he owns the schedule. He controls their time, so he says when “on time” is. And then he shows up with way more manpower and more vehicles than it would take to raid their stuff as a show of just how futile any resistance would be.

He takes more than half of their stuff, because “I say what half is.” The message: I own all of your stuff, so whatever you get to keep, it’s because I’m letting you keep it. He says he’s magnanimously letting them keep their food, and then demands a thank you for his generosity. He takes their luxury items like mattresses to emphasize that their life of ease is now over, now that they’re his slaves.

He brings Daryl along, then refuses to let him speak or let them speak to him, to remind them of the leverage that he always has over them, even when he’s not inside their gates. And to stand as a visual reminder of how much worse their lives could be if he willed it.

He takes all of their guns, and when two show up missing, he threatens to kill helpless inventory woman Olivia unless they find them. In doing so, he makes the Alexandrians police themselves, forcing them to question each other, ransack each other’s homes— pressing them into service, effectively making them extensions of his all-seeing surveillance state. He’s told them that they work for him now, and now he’s making it happen.

And so on, each little gambit tuned to cowing them, breaking down their lives, dismantling their community and reshaping it as a part of his. It’s brilliant in its effectiveness and ruthless in its execution. And it would be almost thrilling to watch (Jeffrey Dean Morgan remains absolutely transfixing) if it weren’t so horrific.

The most horrifying of all of these tortures, and so in a sense the symbol for all these moves of Negan’s, is how he casually asks Rick to hold Lucille for him while he gets his tour of Alexandria. It’s so awful because it works in many ways at once. Rick has to hold the weapon that killed his friends, making him remember that he feels responsible for their deaths, his decisions that led them there. (Asshole Spencer, who hid those two missing guns, is eager to remind Rick of this, but it’s not like it’s ever been far from his thoughts.) And meanwhile reminding him that any move he makes now could end in similar bloodshed, which would be on his hands too.

And of course Negan’s also putting the means to make that wrong move right in Rick’s hands, daring him to use Lucille, to blow his top, to attack Negan for any of the mortifications he’s serving up, and suffer the consequences. And with each awful thing Negan does, we see Rick’s grip tighten on the bat—and then loosen. Because there is nothing he can do, not without sacrificing more of his people. And so the terrible thing he’s holding becomes a constant reminder of his impotence and the uselessness of his anger. It’s brilliant and subtle and devastating to watch.

And it works. By the end of the episode, Rick is telling Michonne—who has been sneaking off into the wilderness with a sniper rifle to practice, supposedly for an eventual assassination attempt on Negan—that she needs to give up her gun to the Saviors even though it’s not on the inventory and they’d never have known it was missing. He claims if they ever found it later the repercussions would be awful, but clearly he thinks of it as a sign of good faith to Negan. The torture is doing its work on him, making him into a good soldier for Negan, desperate to gain his trust to avoid any more killing.

Because Rick has, in this very short time, under the pressure of Negan’s campaign, come to believe that this is indeed their life now: “We play by their rules, we get some kind of a life.” They don’t have to like it, but they have to accept it.

Somehow Rick doesn’t see the real problem here, which is that Negan’s arrangement isn’t sustainable. Sure, he’s letting them keep their food this time, but what about next time? Their resources are limited, and it’s not like they can do a lot of effective scavenging (in a week) with zero guns. Negan says that next week, “if you don’t have something interesting for us, somebody’s gonna die.” But they have no way of knowing what he’ll deem interesting, or why. Rick, blinded by guilt and pain, seems to think they can keep providing for Negan and somehow he’ll become reasonable over time. In reality, his intention seems to be to bleed them dry for as long as he can and then kill those he can’t recruit. But Rick can’t see this, because the other option is suicidal resistance.

On the other hand, Negan seems to have made a tactical error, even with all of his careful scheming. Because in taking all of their guns away, he has signaled that he’d be nervous about what they were capable of if they were armed. He may have had to take them, but that necessity also sent the message that an armed Alexandria could still be a threat to the Saviors. Martyred old Saint Rick (who all but climbed up on a cross in this episode) may not see this, but certainly Rosita does. She goes out into the woods and finds a new gun, tasking Eugene with making her a bullet.

And Michonne does, going back out to continue her sharpshooting practice. Instead, she finds a pile of burning mattresses. Because of course Negan’s people didn’t actually need or want them—it was all about taking away Alexandria’s comforts. And that fire lights a corresponding one in Michonne’s belly. So yeah: not everyone is just going to roll over now, Rick. Time to organize. Find your own army to fight that unstoppable army. I happen to know this weirdo with a tiger… 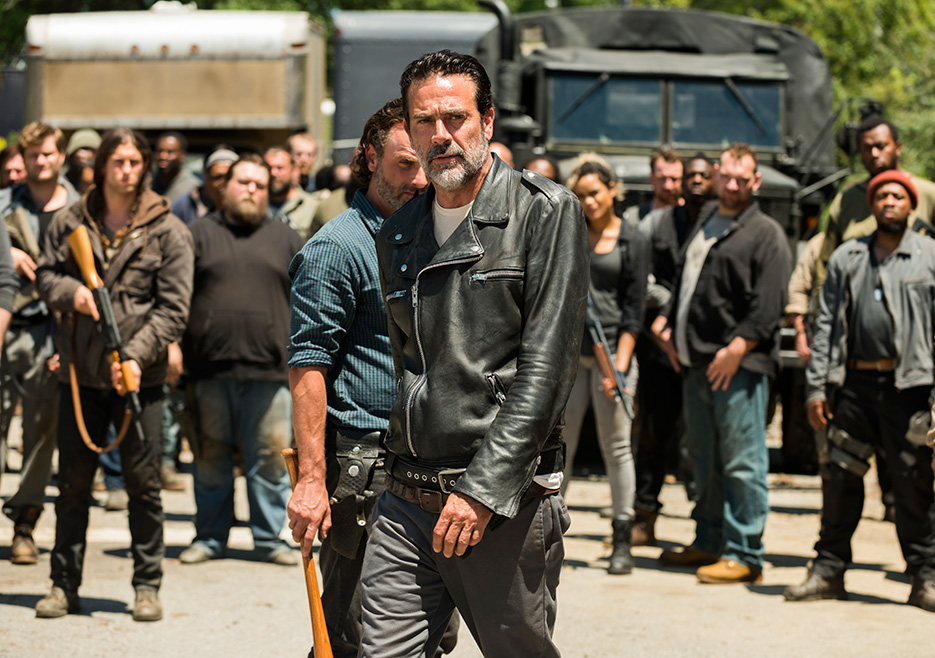