And it’s that time again—time to meet a new post-apocalyptic community!

This one’s called Oceanside, and it’s…by the ocean, which is probably the least interesting thing about it. They’ve got a pretty good supply of fresh fish, which could make you wonder why everyone isn’t setting up on watersides. But I sat through hours of Fear the Walking Dead so that you don’t have to, and trust me, it’s not all surfing and rainbow trout. It does mean a lot of the residents use spears as weapons, and they call the walkers “bobbers,” which is pretty cool.

But what is really unique about Oceanside is that it’s a totally female society. Not a man among them. And you’d be forgiven for thinking this was their choice, that we’d stepped into a kind of zombie-world Themyscira, because the show clearly wants you to make this connection. Fierce female fighters, armed to the teeth = Amazons, and no men allowed.

It’s another misdirect, though. The truth is, Oceanside is dude-free for the simple reason that their community (in a previous location) tried to fight back against the Saviors, and Negan responded by lining up everyone over 10 with a Y chromosome and shooting ’em all in the head. So the now-all-female population ran, setting up in a new location where the Saviors can’t find (or haven’t yet found) them. And they protect their secret by killing on sight anyone who happens to stumble upon their settlement.

That’s bad news for this week’s protagonist, Tara, who does just this sort of stumbling and comes close (repeatedly) to paying for it with her life.

If you recall, the last we saw Tara, she was leaving on a two-week supply run with Heath (he of the second-most-interesting haircut in Alexandria) right after the attack on the Savior outpost. Her long absence from the show (most likely timed to allow actress Alanna Masterson to have her baby) now gives us something of a chance to catch a breath after the unremitting sadness and horror of the last few episodes. Tara’s been gone this whole time, so she doesn’t know about the Negan situation, doesn’t know her girlfriend Denise has been arrowed through the head, etc. And so we get to relax a bit into the show’s pre-Negan optimism, even if we know it’s all about to come crashing down on her too.

And who better to provide this needed respite than Tara, one of the most purely entertaining members of the show’s core cast? The late lamented Abraham was a funny guy, and Eugene is a chuckle-worthy weirdo, but Tara’s winsome awkwardness, particularly in tense situations, makes her a delight to watch.

Not to mention that, as a lesbian, she’s the perfect character to introduce us to this land of ladies. “I never thought I’d find myself asking this, but where are all the men?” she grins. A flirtation is only barely hinted at between Tara and Cindy, the Oceansider who rescues her, instead keeping our focus on the subtle gender politics at play, the suggestion of an “Are Men Necessary?” experiment facilitated by the apocalypse, whether planned or not.

I’ve long maintained that The Walking Dead is in part an extended metaphor about toxic masculinity, a fact which renders its female characters almost automatically more interesting (and the most interesting male character, Daryl, arguably derives his fascination in part from his indeterminate sexuality and ambivalent masculinity). The places and roles of women in this new world—Maggie’s leadership, Carol’s badassery, even Rosita’s uniform—are far more compelling than a story of how men continue to rule and fight and shoot.

So the introduction of an all-female village is logical and welcome at this point, and having Tara enter as an invading presence from the male world who happens to be a gay woman is a deft move. Cindy, who saves Tara from the ocean and then from her village-mates’ desire to immediately put her to death, is the granddaughter of the town’s leader Natanya. She throws herself between her people’s guns and her possible crush, a gesture toward the Pocahontas myth—though that narrative is complicated by Tara’s gender and the fact that she has no desire to take over or even spill the beans about Oceanside.

Instead of killing Tara, the Oceansiders offer to let her stay. But she demurs, admitting she’s been lying about being a lone wolf and has a community she needs to get back to, with the hope that their people can work together. Once Natanya realizes that the community she comes from has not only had contact with the Saviors but has mightily pissed them off, though, she knows she can’t really let her go. It would just be a matter of time before Tara led their enemies back to them. So Natanya sends her off into the woods to be killed.

Cindy saves Tara again. But before sending her on her way, she makes her swear she won’t tell her people about Oceanside. Cindy, who has killed for her village before, has come to believe that the killing doesn’t need to continue. Murder isn’t something they have to do, it’s something they choose to do. So Instead of using death as a safeguard, she’s going to rely on trust.

In flashback scenes with Heath and Tara, we get the story of how she ended up in the in the first place (bridge, sand zombies, stupidity). These scenes seem rather extraneous, especially in an episode with a 70-minute running time. But one thing that stands out is that Heath, after participating in the Savior outpost extermination and then surviving two weeks on the road, has ended up with a pretty grim moral nihilism: No act is good or bad anymore, nobody is really your friend. You just do what you need to do to survive.

After Tara returns—walking the entire way back to Alexandria only to meet the distraught face of Eugene bearing news of her girlfriend’s murder and the fall of their free city—she keeps her promise. The Saviors have taken all of their guns, but Tara refuses to give up the secret of Oceanside and its huge trove of weapons.

Siding with Cindy against Heath, she decides there’s still something more important than survival. The million-dollar question is, do we agree? 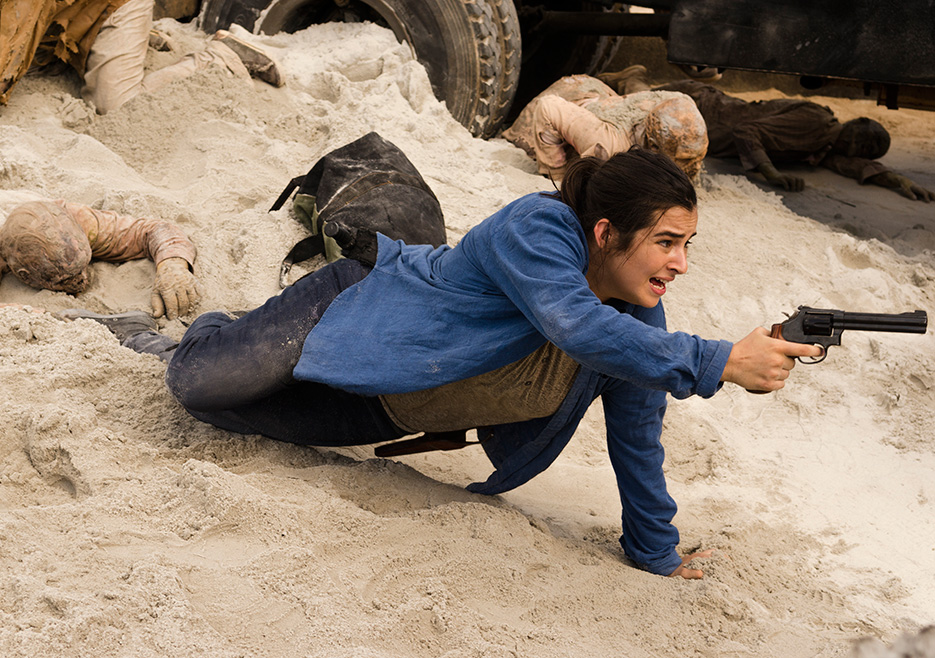