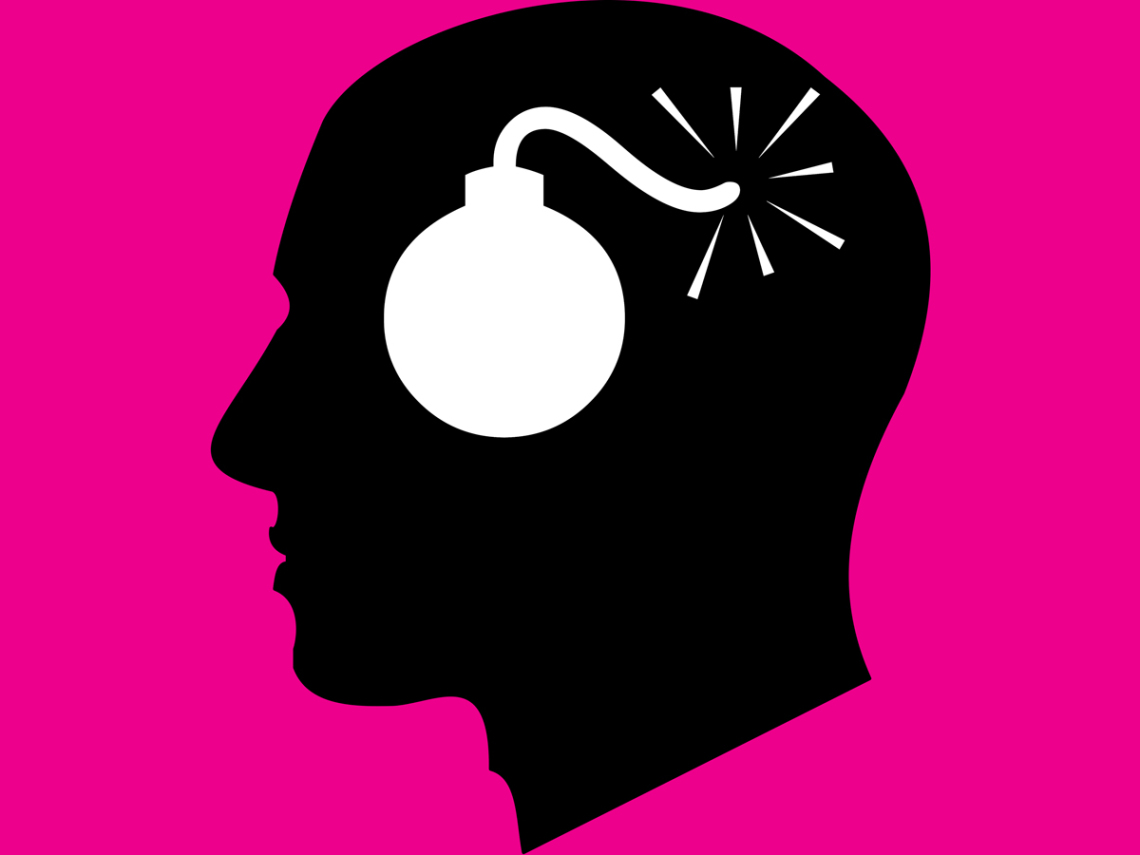 You’re only aware of what happens right before and after it. Thought Catalog

The scariest thing about having a seizure is that you never remember it. You never see it. You never feel it. You’re only aware of what happens right before and after it. One moment you’re watching a video on your computer, then you blink, and suddenly a half-dozen worried-looking ambulance workers are staring down at you.

And then an infantile feeling of shame washes over you because you had no control over what your own brain just did to you. Your own mind just laid you flat out on the floor, blood drooling out of your mouth. And there’s also the grim realization that no matter how long it had been since the last one, sooner or later it’ll happen again.

As of this writing, it’s been almost five years since the last one.

My brain has always been weird, and my personality has always dutifully followed in its path. I started having seizures in infancy—only at night, and only while asleep.

My older brother Johnny says that when I was around three, I’d get down on my knees every night before going to bed and pray to God that I wouldn’t get “the dreams” again.

He swears that the following story is true. I make no judgments either way, because the story is disturbing enough to be worth telling. He says one night when he would have been around 16 and I was around three, my mom called him into my bedroom. I was thrashing around the bed in mid-seizure. Then I stopped shaking. A gurgling sound came out of my mouth. Then I spoke in an adult woman’s voice. He doesn’t remember what “she” said, only that an adult woman’s voice was speaking through a three-year-old boy’s mouth. After “she” said her peace, my body slackened, and I was restfully asleep.

They carted me off to a psychiatrist soon thereafter, and he explained that my mind was so bright and active, my tons of excess mental energy spilled over into my sleep.

During childhood, other family members often spotted me having night seizures. My sister frequently observed my young, sleeping body kicking like a pink, hairless mule. At around age 12, when Ma chanced upon me flapping around on the bed like a gasping tuna on a ship’s deck, my family decided it was time to have me tested.

I remember staring at the scuffed, Wrigley’s-spearmint-gum-colored hospital floors as workers fastened cold metal electrodes to my scalp. I was instructed to lie back on the starchy white sheets and shut my eyes as they began flashing the strobe. Green-and-red honeycombs spun on my closed eyelids. As I drifted off, a row of twitching pens recorded the seismic disturbances inside my head.

The doctor who read my EEG said it showed abnormalities, but they were “within the statistical margin of error.”

After that, I went 35 years without a seizure. I wasn’t sure whether my brain had outgrown them or if I was merely gearing up for the Big One.

In early 2008 I began having headache symptoms that fell neatly into the category of migraines: painful sensitivity to light with jagged rainbow-marquee visual effects forming around objects that I’d try squinting at, followed by nausea and vomiting.

One morning in early June 2008, I began to see little multicolored plastic chips in front of my eyes. Then I felt intensely nauseous and tried to induce vomiting, with no success.

And that’s all I remember.

According to my wife who was eight months pregnant at the time, I walked into our living room, sat on the couch next to her, looked out the window, and my eyelids began fluttering. She thought I was just goofing and asked me to stop. Then my arms and legs started flailing, I bit down on my tongue hard enough that blood started gushing out of my mouth, and I finally collapsed, stopped breathing, and turned blue. She pushed furniture out of the way, dragged me to the floor, called 911, then frantically administered mouth-to-mouth.

At the hospital, they strapped my head down with leather and shoved me into a giant cold white vagina where I was absolutely unable to move or scratch myself for ten minutes at a time. It revealed a brain tumor that a doctor’s assistant described as “plum-sized.” The tumor had been growing for an estimated 15-20 years: 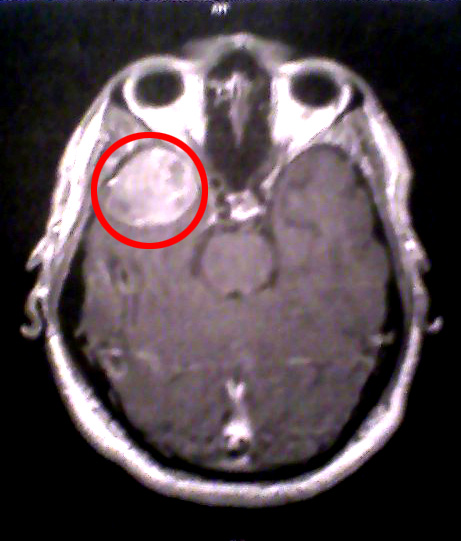 Poring over some of my old writing revealed two intensely disturbing prophecies. This is from my 2002 book Shit Magnet:

So much power in this psychotic mind of mine. Words and thoughts which burn laserlike through glass, steel, and cement….A brain tumor? A blood clot? A bone splinter pressing in against my aggression center? Doesn’t matter.

And this is from an intro to my 2004 comic book Trucker Fags in Denial:

The sad, telling truth is that Mr. Goad channeled these characters from a walnut-sized tumor in the back of his brain…

How did I know? Only my brain knows for sure, and for the moment it’s not spilling any secrets.

The operating physicians had me so doped up on pain medication that I didn’t panic, although I dimly recall the surreal dread of being wheeled into a dark pre-op room and looking up at a screen showing a 3-D rendering of my head with a huge hole drilled into it. Then they administered the anesthesia to put me deep down at the bottom of the ocean so I wouldn’t twitch and disrupt their delicate knifeplay.

To get to the tumor—which was technically not in the brain, only wedged between my brain and skull—surgeons had to carve a hockey-puck-sized hole out of my skull. They couldn’t remove all of the throbbing mass since some of it was clustered around a major brain artery, and I risked a stroke and permanent brain damage if they tried slicing into such a sensitive area.

The operation lasted nine hours, after which I had another grand mal seizure. Then they popped the hockey puck of skull bone back into place and stapled my head shut: 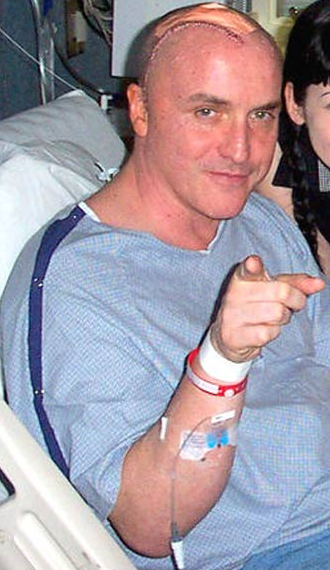 Three months later they zapped the remaining tumor scraps with one hyper-focused shot of radiation. The tissue remains, but it’s necrotic. As my oncologist described it, a beehive remains, but all the bees are dead.

I was prescribed anti-convulsive medication and told I’d have to take it twice a day for the rest of my life.

A couple months after my brain was shot with radiation, I had a grand mal seizure while driving on an Interstate passing through downtown Atlanta. It was the only time I’ve been grateful for Atlanta’s deathly gridlocked traffic, because if I’d been going at a reasonable speed, I wouldn’t be alive to type this. I awoke in a hospital bed to the sight of a police officer writing me a ticket. He thought I’d been drunk-driving.

About six weeks after that, my life was saved by a worker at my office job who was making the rounds at the end of the day and discovered me unconscious on the floor in my cubicle. My oncologist speculated that my two post-surgery seizures may have been caused by the fact that radiation therapy causes brain swelling. She increased the dosage on my seizure medication.

My last seizure happened on a Saturday night in July 2011. I’d forgotten to take my seizure pill, and four hours later, WHAM! Sprawled out on the floor, blood running from my mouth. This was intensely depressing for me, because it had been over two years since the previous seizure and I’d vainly hoped I was done with all that.

I now take two doses of those plain white giant oblong pills daily—one at 6AM, one at 6PM. They dampen my brain’s synapses to the point where I don’t risk the electrical short-circuiting that constitutes a seizure.

As the years ground onward, the hockey puck of skull bone became devascularized and started shrinking to the point where it looked as if I’d been kicked in the head with a boot that left a permanent dent: 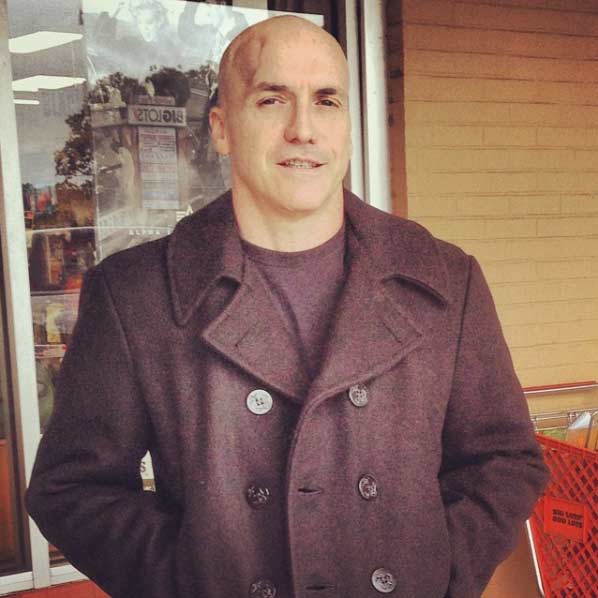 After a neurosurgeon examined my skull, he found that not only was the hockey puck shrinking, it was loose—if I were to be hit in the head there, that part of my skull would collapse and render me permanently brain-damaged.

So about a year ago I elected to have a titanium plate put in my skull to cover the dent. So there’s no longer a giant crater on that side of my head, only a nasty scar: 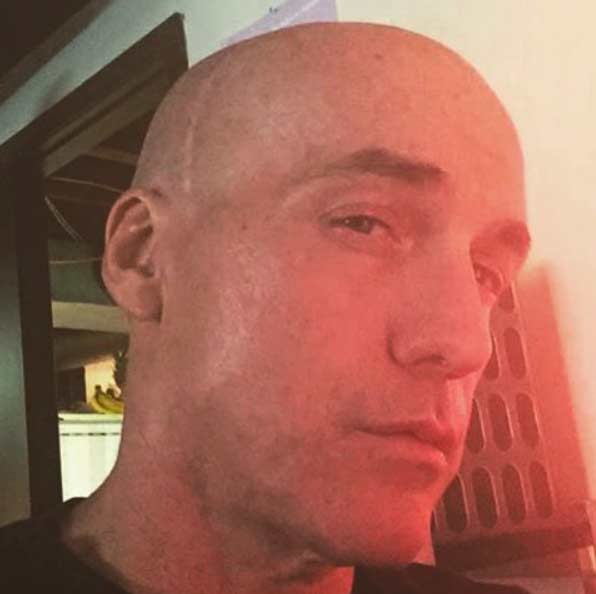 There’s no longer a giant crater on that side of my head, only a nasty scar Author provided

My latest neurosurgeon told me that the type of tumor I’d had—a meningioma—is a “brain invader” and almost always comes back. It’s never cancerous, but it can wreak all sorts of havoc such as strokes and further seizures. He says they typically come back after about nine years.

It’s been about eight years.

Once a year I go in to have a brain MRI performed, and they shove me like a swaddled infant into a giant steel hole that makes the most ungodly and inhuman crushing robot industrial grinding noises for a half-hour to determine whether the renegade brain cells have come creeping back.

If they come back, they’ll have to rip open a giant flap of flesh in my head for a third time, tear out the metal plate, dislodge the hockey puck of bone, and tear loose the offending mass. Despite all the gore and gruesomeness that would entail, I suppose it’s better than being a brain-damaged stroke victim who can’t form a sentence or wipe himself or walk across a room.

So I walk around like a suicide bomber strapped to the gills with explosives, always silently wondering if today will be the day. I am essentially in a lifelong fistfight with my own brain, never sure if or when it’s going to betray me. But that’s everyone’s struggle, as everyone’s body will eventually betray them—if they don’t get killed first.

It’s a mind-blowing burden knowing that one day your mind might literally blow up.

This article originally published at Thought Catalog. Follow them on social media here or check out their new website Quote Catalog. 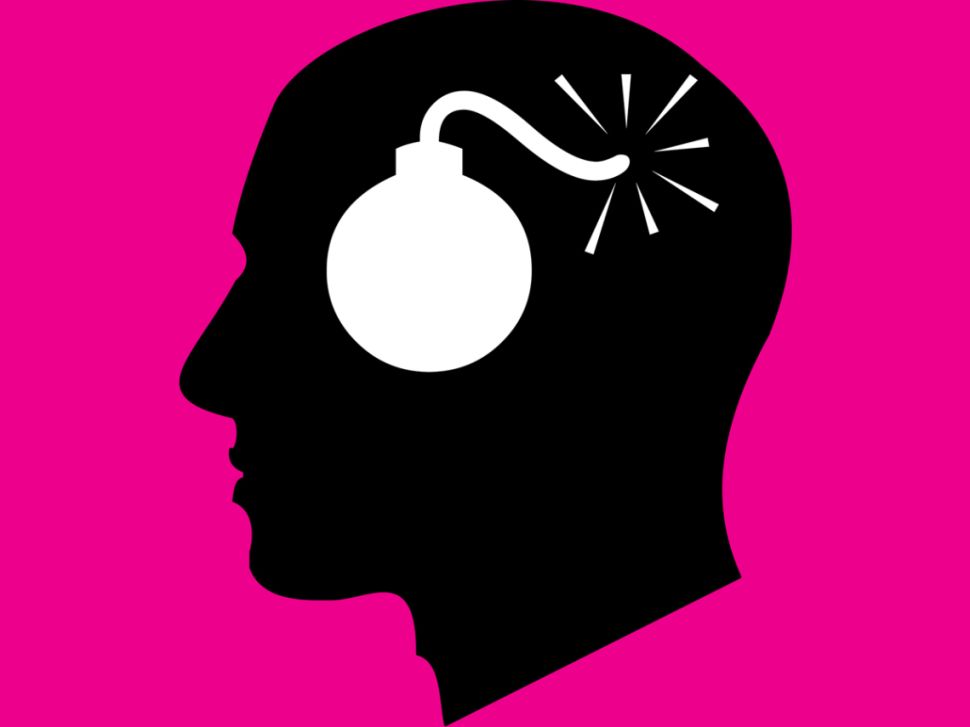