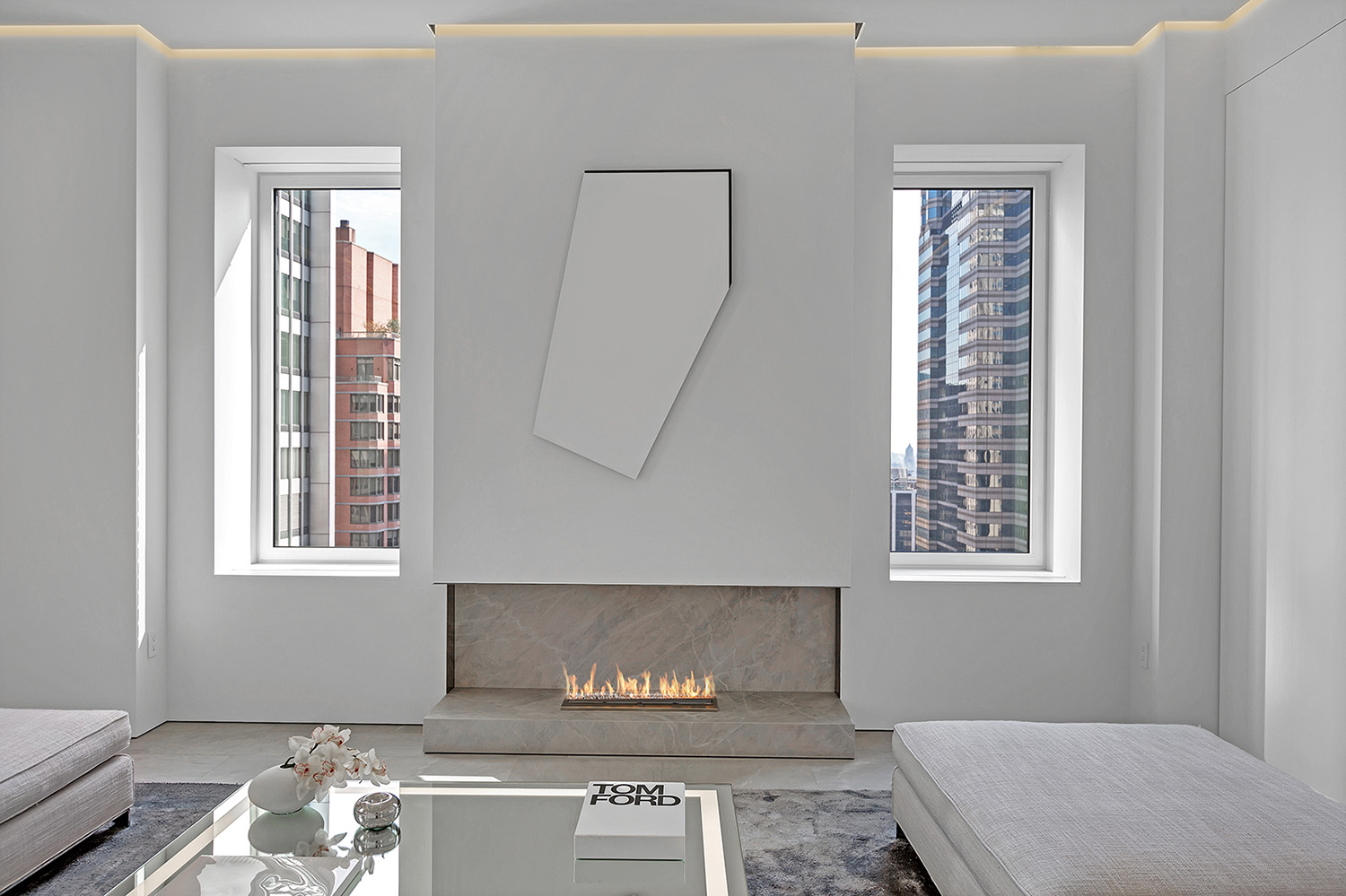 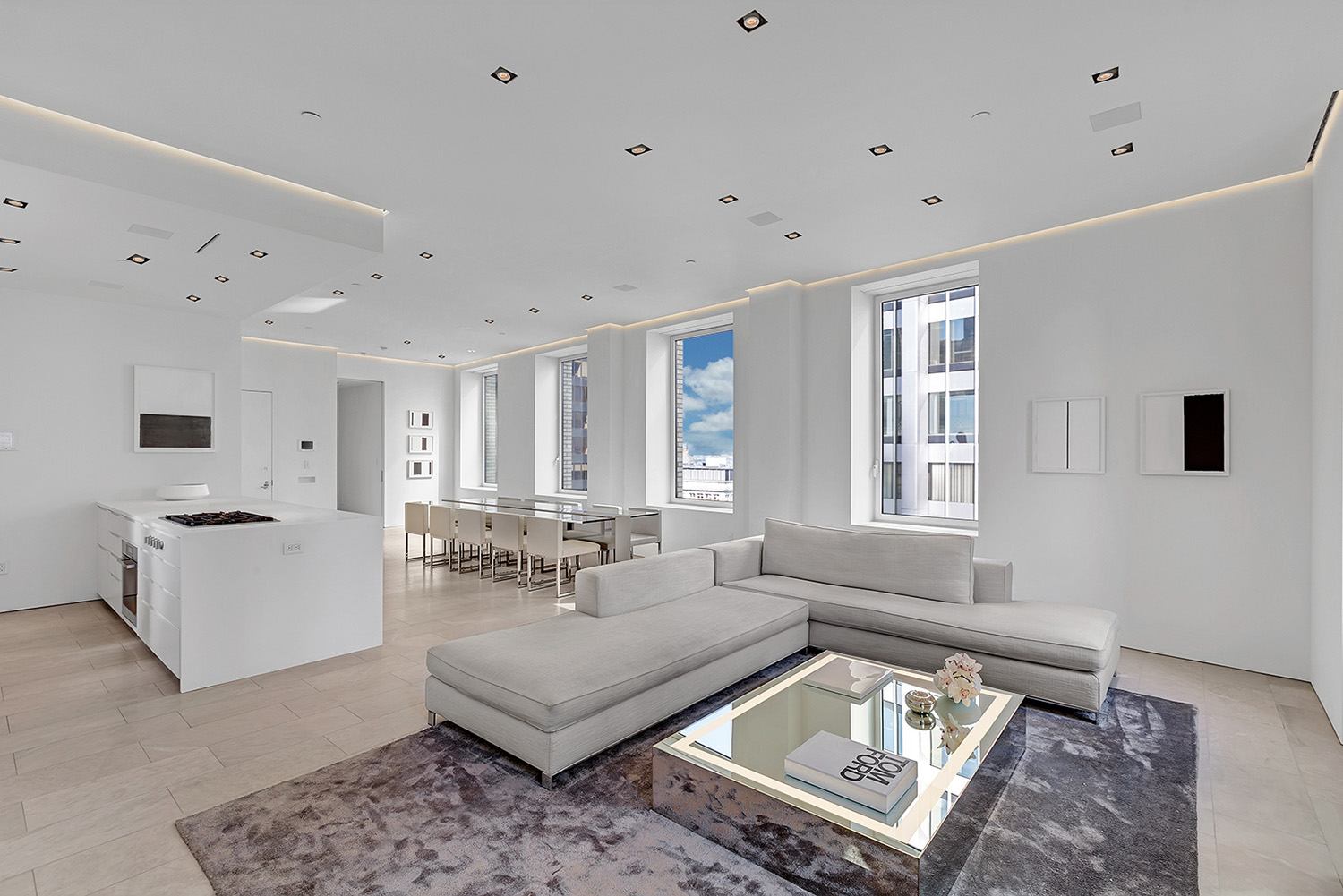 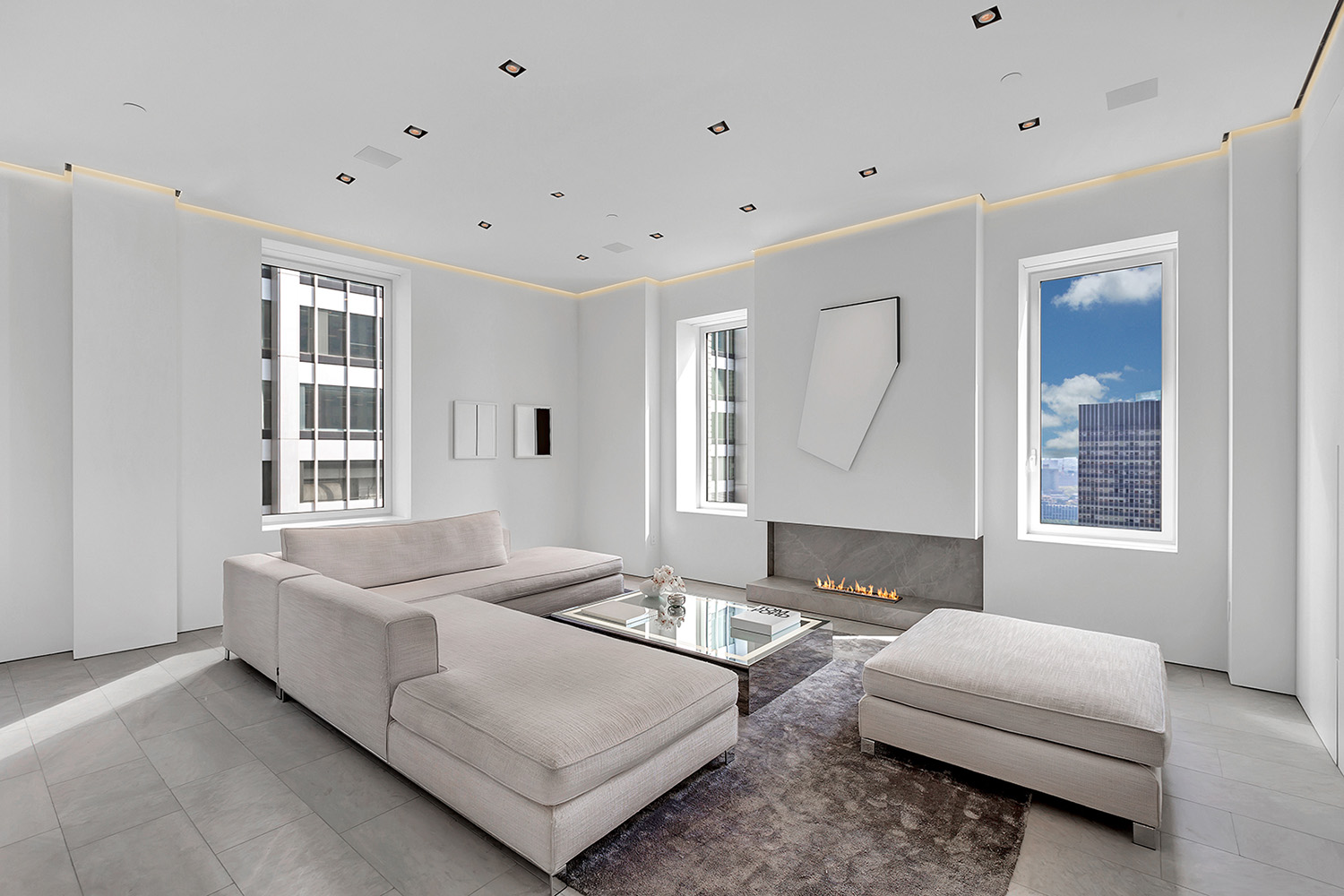 The marble is all imported from a Turkish quarry.
Courtesy Core 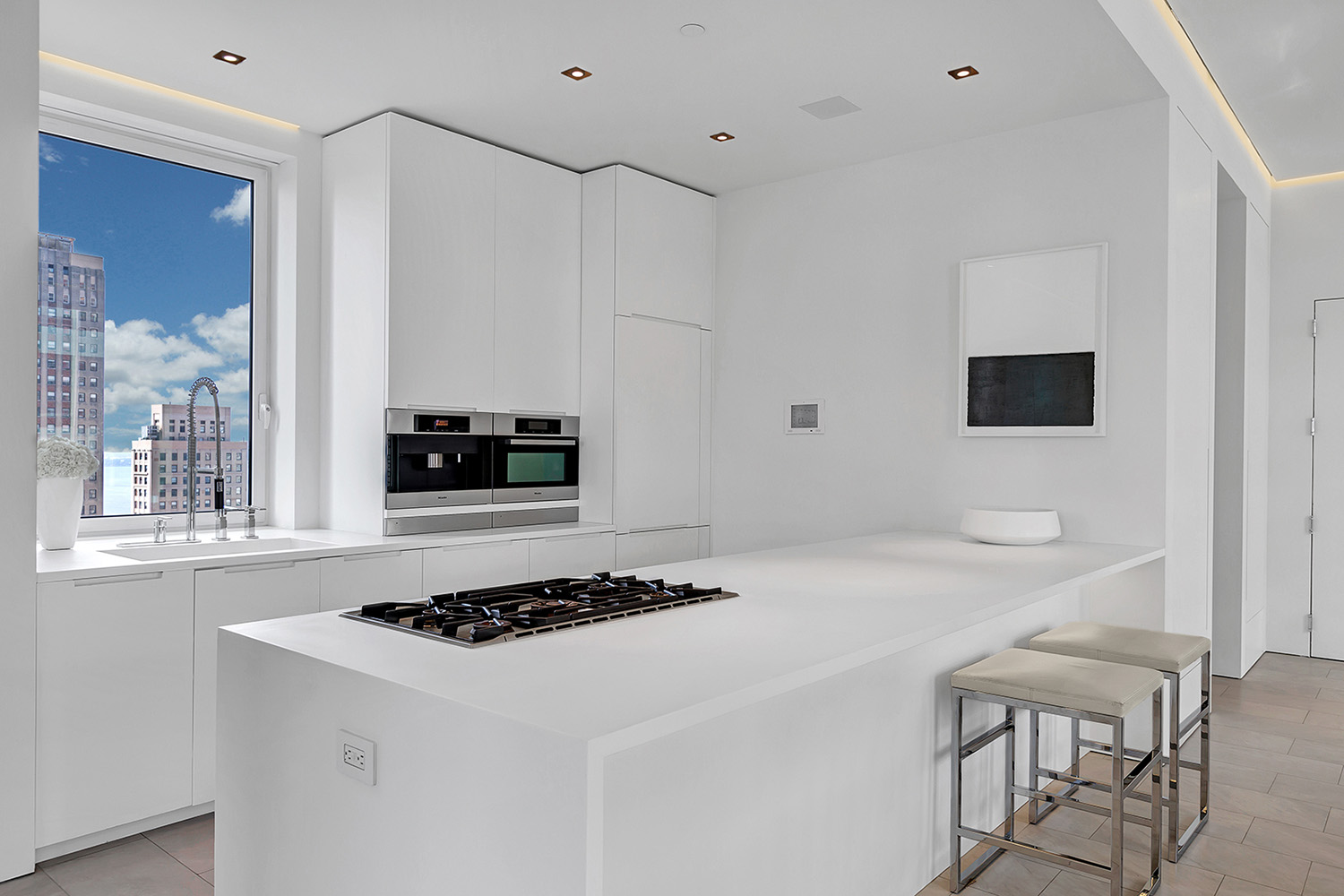 The all-white kitchen provides a view for those washing dishes.
Courtesy Core
Advertisement 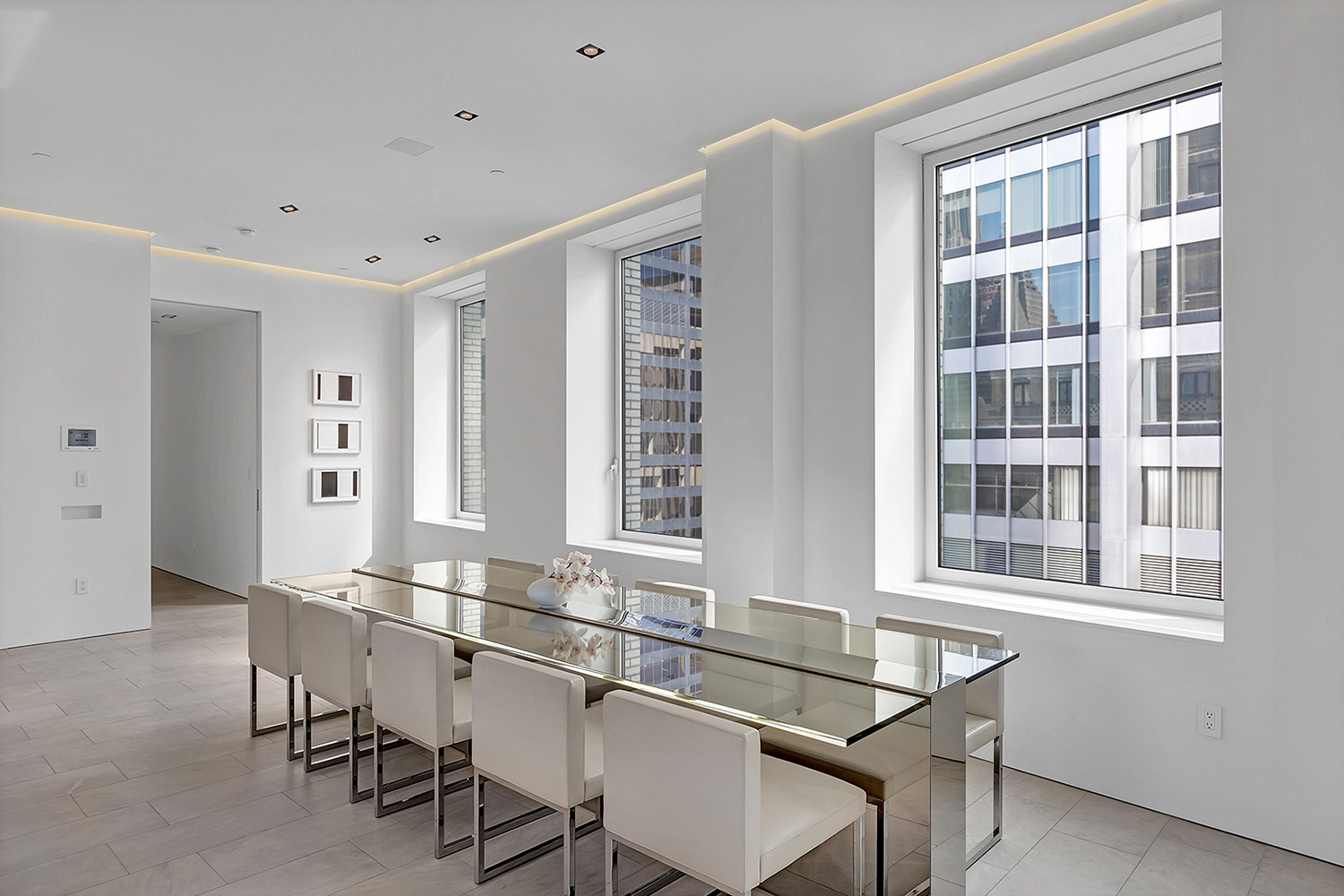 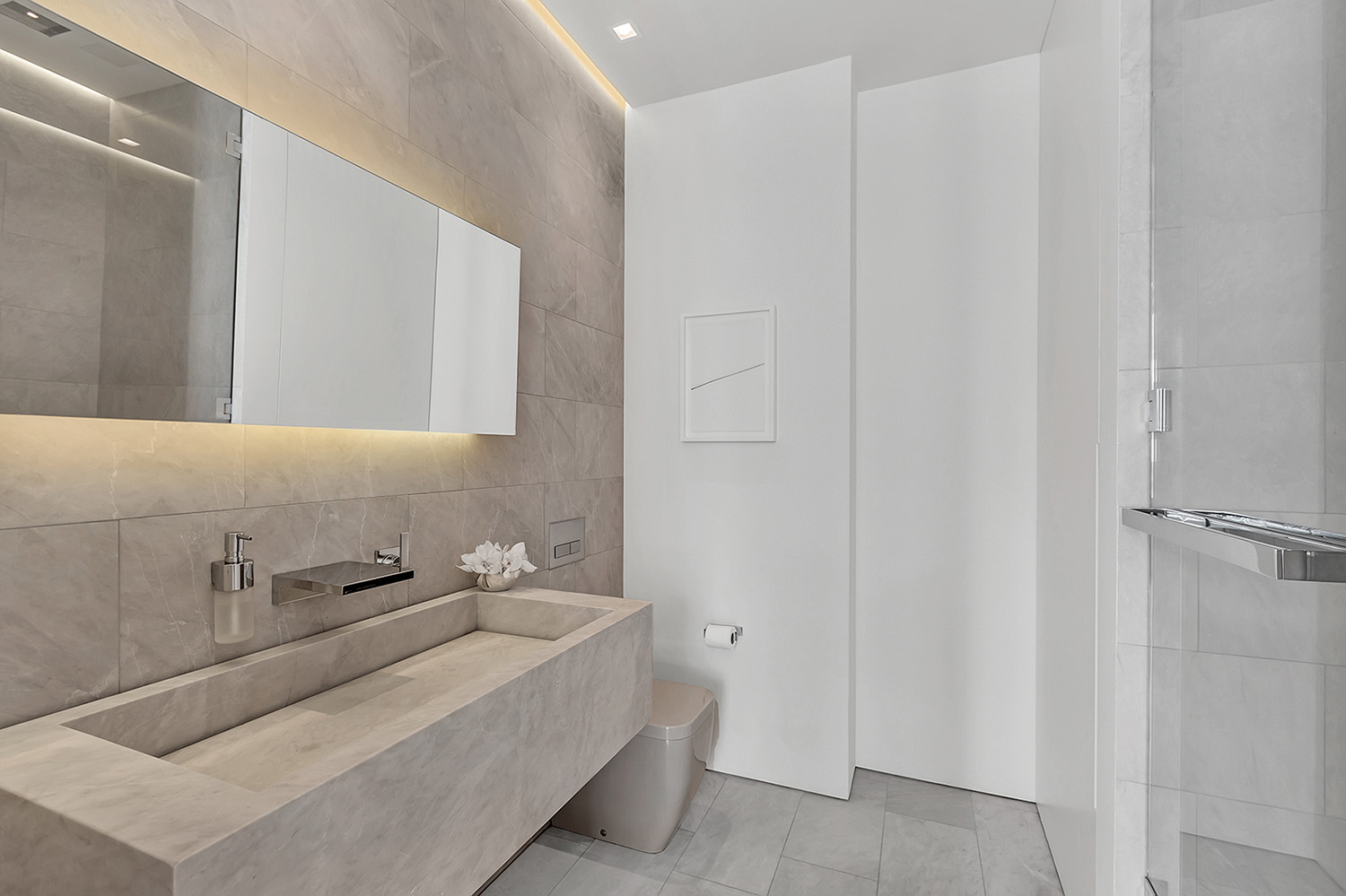 And even more marble in a full guest bathroom.
Courtesy Core 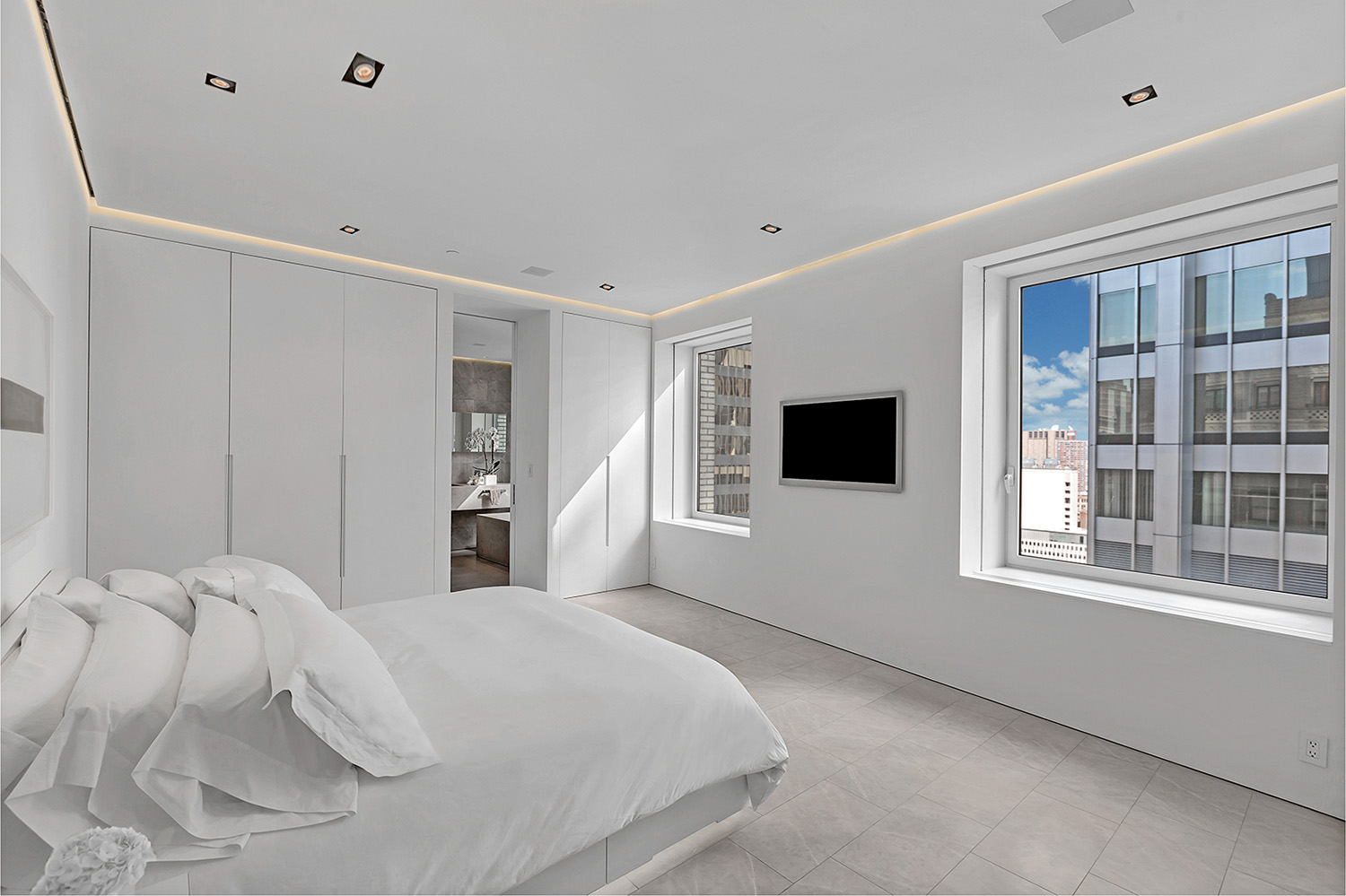 The master suite is accessed by a pocket door, and includes 5 closets.
Courtesy Core
Advertisement 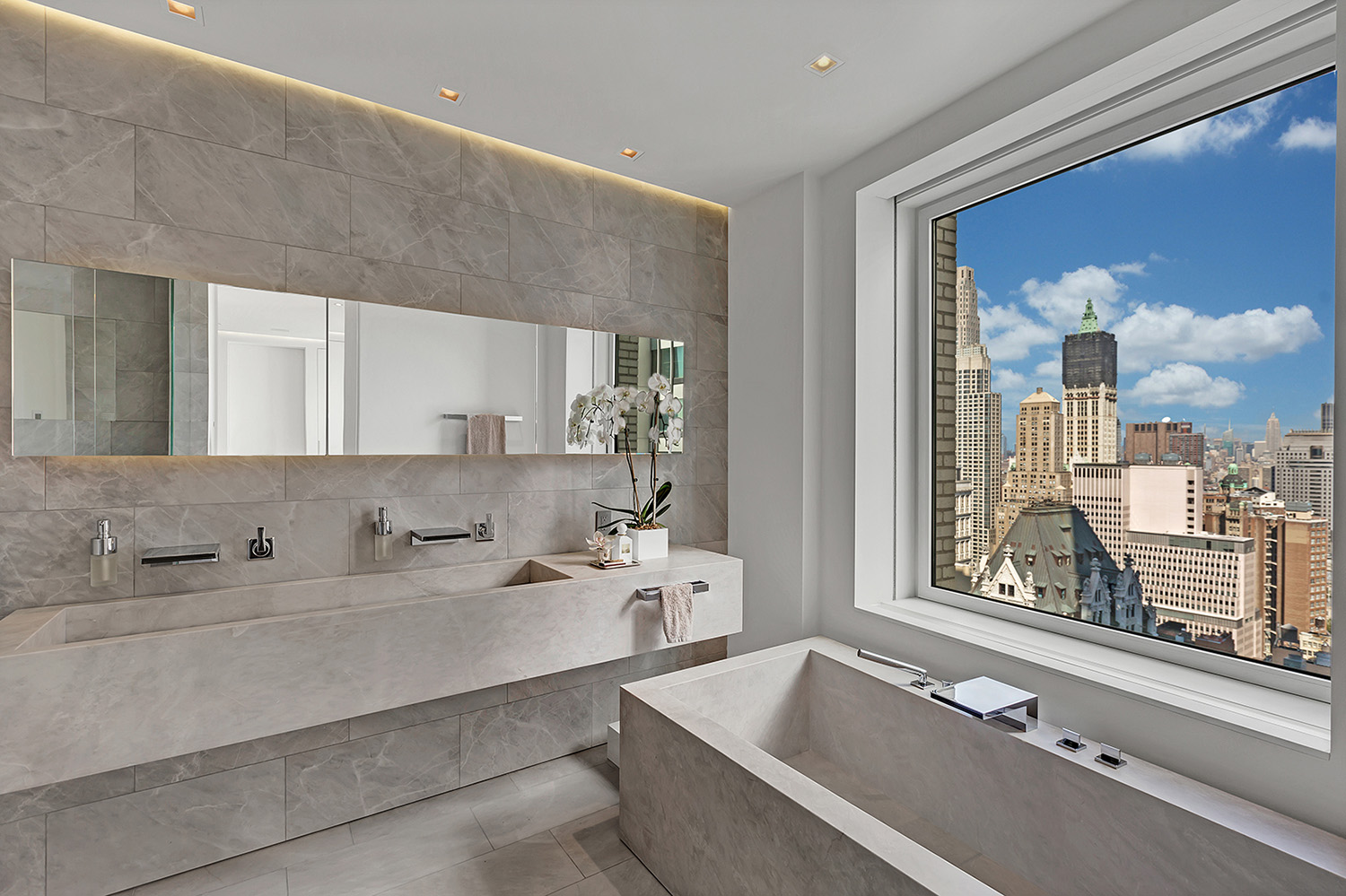 The bathtub is carved from a single piece of marble from the quarry.
Courtesy Core 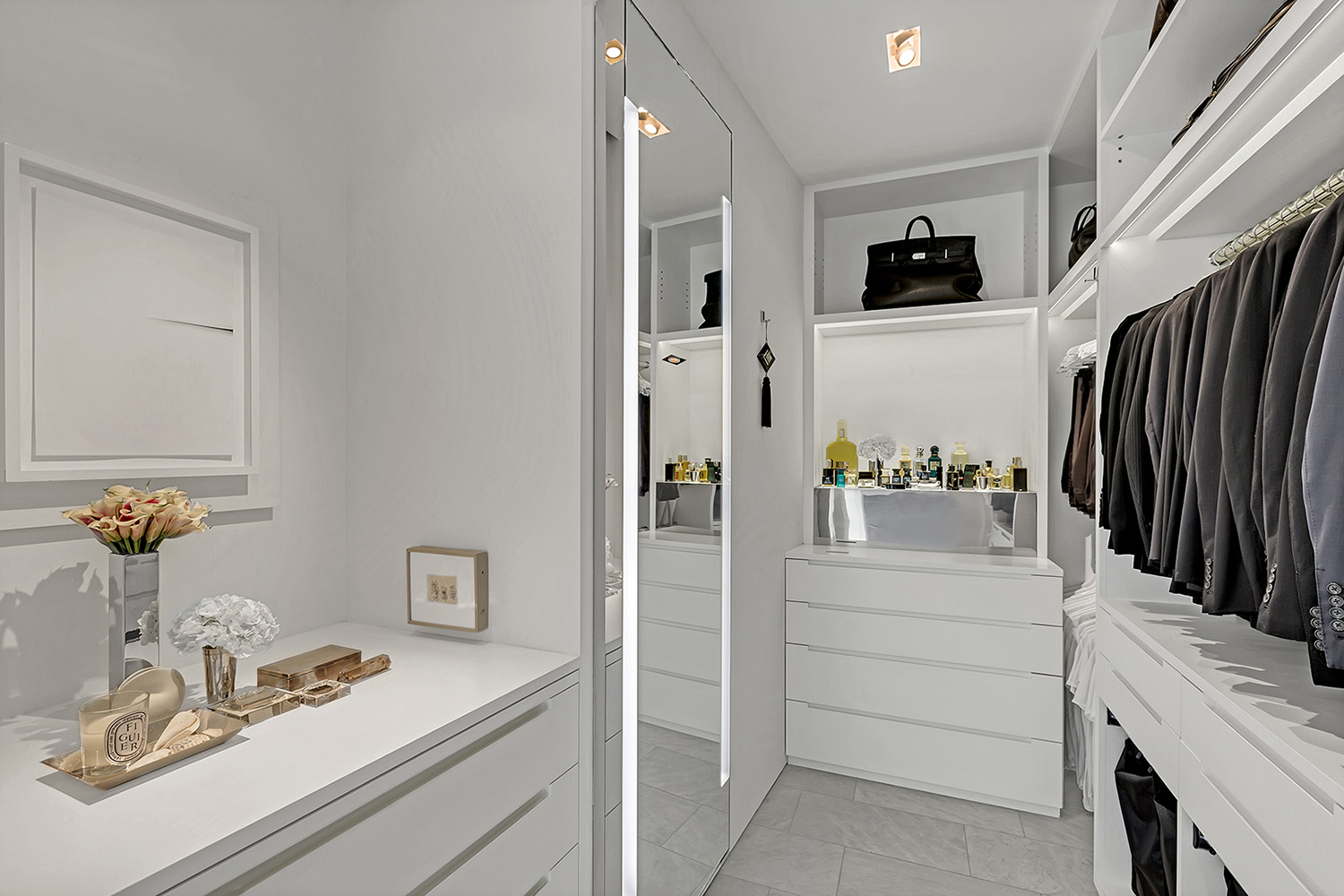 The custom closets include specially made mirrors.
Courtesy Core 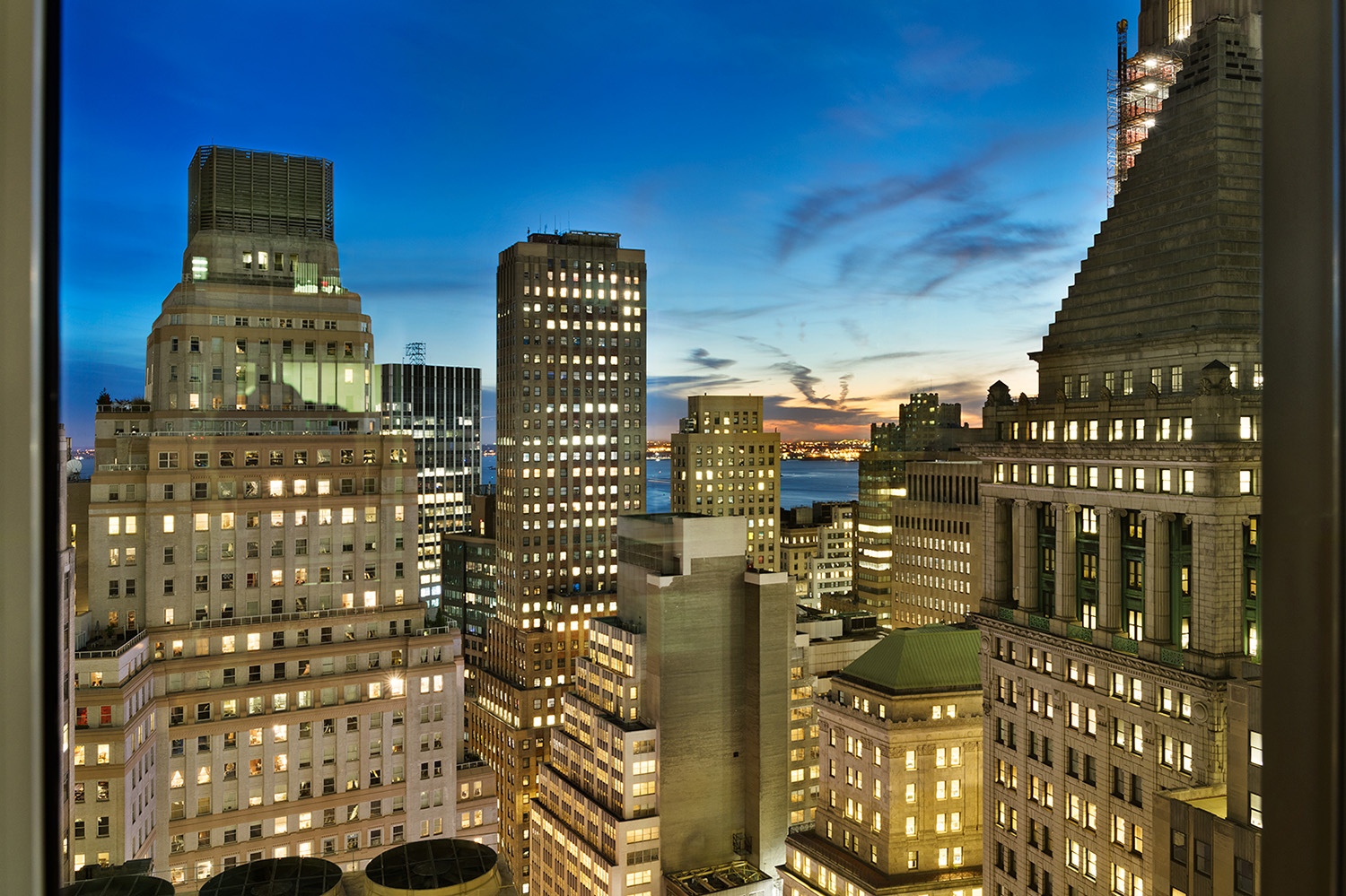 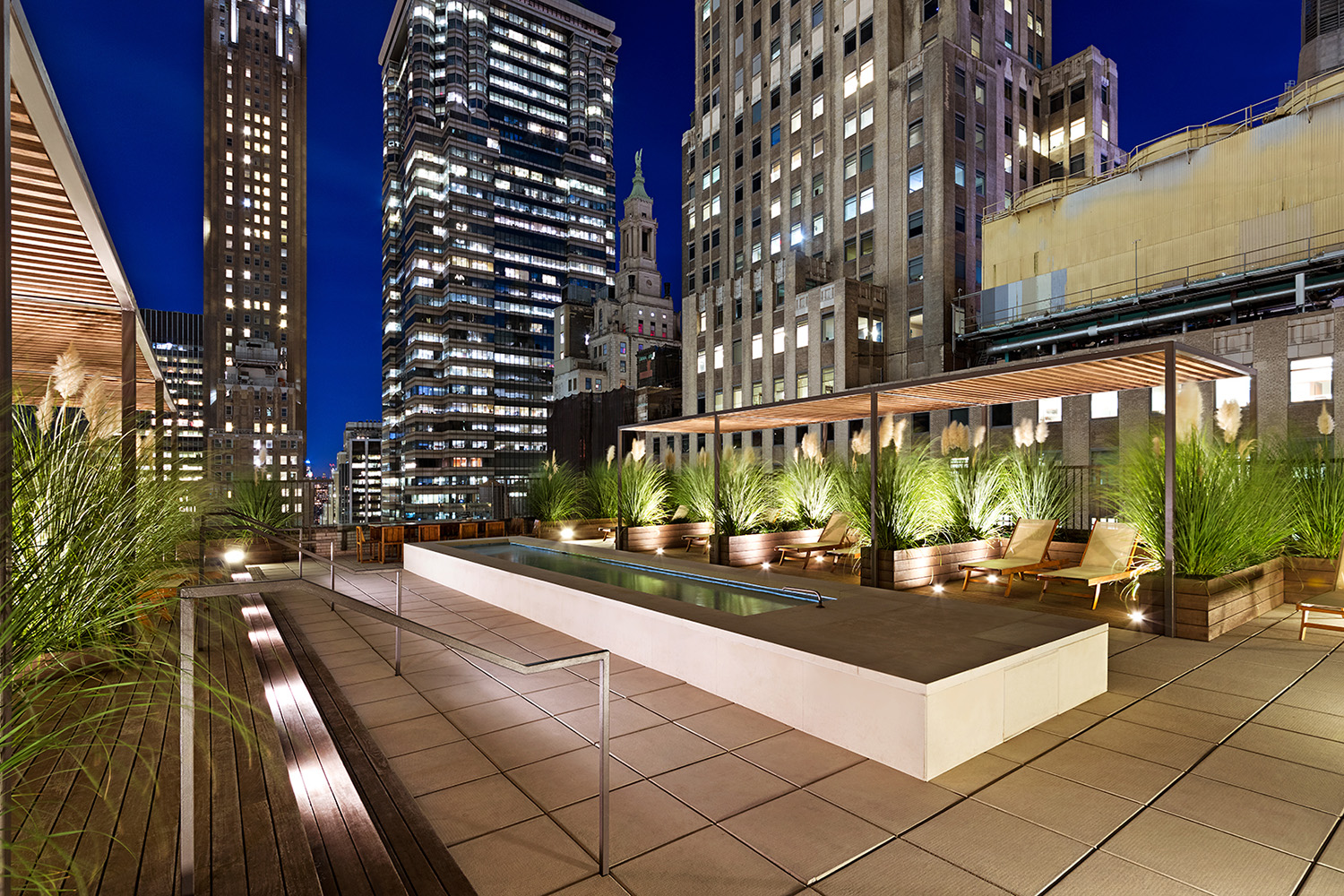 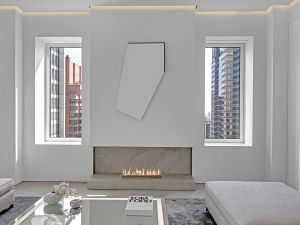 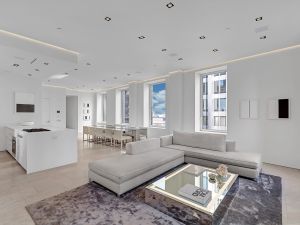 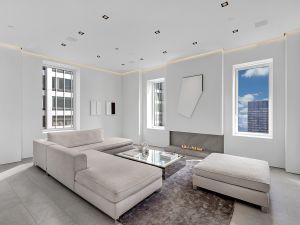 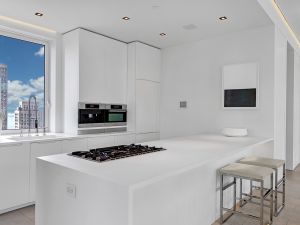 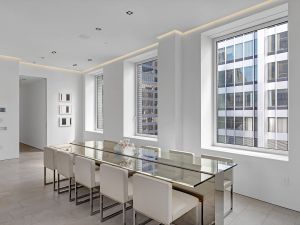 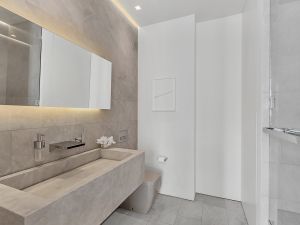 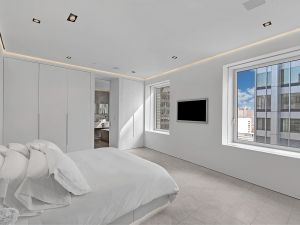 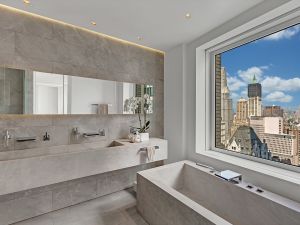 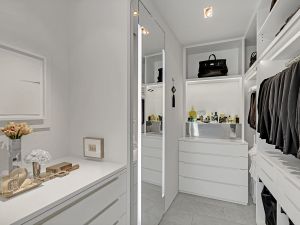 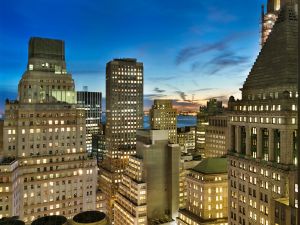 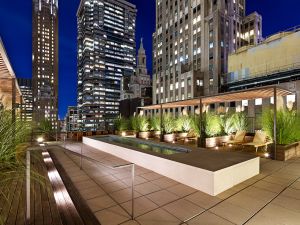 “Everything is perfect,” CORE broker Cartwright Lee declared, opening the door to an apartment on the 32nd floor of 20 Pine.

His words exaggerated just a smidge, but the impeccable white-and-beige, marble-bedecked interiors are quite striking, and even the placement of a black cat perched upon a white sofa looks intentional.

The sellers moved in to the 1,832-square-foot condo (one of two on the floor) in 2013, after completing a two-year gut renovation that included moving the kitchen and tearing out the ceilings to add to their nearly 10-foot height.

“He [the seller] went to Turkey to pick out the marble himself,” said Lee, who shares the $4.2 million listing with Heather McDonough and Henry Hershkowitz, as he gestured to the material underfoot. Apparently, the seller was so taken with Metamar, the quarry in southern Turkey, that he used its marble throughout the home, including around the gas fireplace in the great room.

With the exception of stainless steel Miele appliances, the open kitchen is, of course, all white, from the Corian countertops to the matte lacquer cabinetry. (Never fear, though: More marble can be found throughout a full bath.)

A pocket door opens to the master suite, where a walk-in closet’s full-length mirror has “two settings—you can do either daytime light or nighttime light,” Lee told us. There are five additional closets in the master—custom built for the likes of suitcases and shoes.

The pièce de résistance, however, is within the master bathroom. “Wait till you see the tub,” Lee said, and indeed, as nice as the custom mirrored vanity, marble trough sink and rain shower are, the bathtub, “built from a single piece of marble, from the same quarry,” does stand out. “I think it’s one of the best bathtubs in the city,” he added.

“The design is so special,” Lee opined, walking over to the spotless couch to pet the still perfectly positioned cat—it shrank away. Apparently, like other components of the apartment, the feline prefers not to be disturbed. “It’s like a prop,” he laughed.