Donald Trump’s election victory is a win for the Deplorables—you know, those uneducated racist, ignorant brutes in fly over country, who America’s political elite and the mainstream disdain.

Trump’s victory is a repudiation of Barack “Hope and Change” Obama, Obama’s hideous ObamaCare and his endless rounds of golf.

Trump’s victory repudiates Hillary Clinton’s criminality and corrupt FBI Director James Comey, the man who sold out the rule of law and let Hillary’s criminality slide just enough to give her media cover.

To become president, Trump had to knock-off Crooked Hillary. But to knock her off he had to stomp the corrupt mainstream media. And he succeeded.

In strategic terms—a fancy way of saying the long run—Trump’s stunning defeat of the corrupt mainstream media may be his most important election victory. Here’s why: Since 1968 mainstream media bias (a wicked bias favoring leftist Democrats) has been America’s most grave strategic weakness. America is extremely powerful. Given America’s military and economic power, our enemies pursue “judo strategies” that exploit internal weaknesses. How do you defeat America? You let America defeat itself.

Our biased media is a route our enemies exploit. Here’s the weakness in a nutshell: America’s biased mainstream media won’t let Republicans fight and win wars. Sure, it’s a bit more complex than that, but every honest soul with a brain—which automatically excludes Dan Rather, Katie Couric, The New York Times editorial board,  New Yorker writers, Slate screeders and the entire staff of Puffington Host—knows my summary is accurate.

These are the words an honest media would have used to describe Hillary Clinton.

America, however, doesn’t have an honest mainstream media.

“Mainstream media” is no longer an accurate term. “Seemingly dominant media” is the best way to describe what I once called the NYDCLA (nid-claw) axis. NYDCLA = New York-Washington-Los Angeles media axis.

Of course the NYDCLA’s tentacles extend throughout the country, through feckless pseudo-journalist wannabes who think their liberal politics will bring their resumes to the attention of some toff at the Times or Washington Post or LA Times or the various dying liberal media outlets.

Trump ran against the NYDCLA axis because he knew it hurts America. And he beat it, to an embarrassing pulp.

This decayed axis of propaganda and spin was the P5 in the Problematic 5 issues of the 2016 campaign I essayed in a column published March 11.

P5: Mainstream Media Loss of  Clout and Credibility P5 began with the advent of talk radio and the Internet. With proliferating Internet and digital media sources, P5 is in full swing. Mainstream media organizations no longer determine the election’s information agenda. Major media organizations have favored Democrats since WW2, so their loss of clout and credibility hurts the Democratic Party far more than it does Republicans—remember Candy Crowley 2012. P5 has policy implications. Internet transparency and search-ability give individual citizens unfiltered access to what Sen. Charles Schumer had to say in 2007 regarding any Supreme Court appointment by President George W. Bush during his last year in office—Mr. Bush couldn’t make one, not when Democrats controlled the Senate! In 2006, Senator Obama filibustered a Bush high court nominee, Samuel Alito—the first sitting president to have done so as a senator. Spin can’t erase the blatant digital historical record. That record is undermining the Obama Administration’s case for appointing a Supreme Court replacement for deceased Justice Antonin Scalia.

The fly-over, deplorable Americans of 2016 were wise to the “seemingly dominant media” scam. Not only were they wise to it, they were fed up with it.

In contrast to Trump, Hillary maintained “public and private positions,” and the SDM (Seemingly Dominant Media—could mean SaDomasochistic Media) let her get away with it.

Goldman Sachs, Deutsche Bank and the other financial powers that paid those ridiculous fees bet that Hillary’s hypocrisy and Hillary’s lies would win the election.

This loss by Goldman Sachs, Deutsche Bank and other financial powers is good news, for many reasons. Obviously, we don’t have a criminal entering the White House. American is also well positioned to get rid of the middle class-killer known as ObamaCare.

Those are the two major payoffs, but there are others.

George Stephanopoulos’ wife, Ali Wentworth, said that she and her husband would leave the U.S. and go to Australia if Trump won.

George, old boy. You’re the Democrat operative with a byline who ginned up the phony Republican “war on women” meme in the 2012 election. You also donated 75 grand to the Clinton Foundation and didn’t mention it to your audience until, you know, it sleazed out.

So, please, you sleazy fraud, you and your bride get the hell out of the States. Go to Australia. Sashay to Down Under and frolic with kangaroos. Kiss a Tasmanian devil.

Aside to Team ABC: George Stephanopoulos was never a journalist and you jerks knew it from the get-go. Stephanopoulos was there to slam Republicans and push Democrats. Yet Team Hilary lost the election. Your scam’s over, Team ABC. You don’t believe it. But it is. 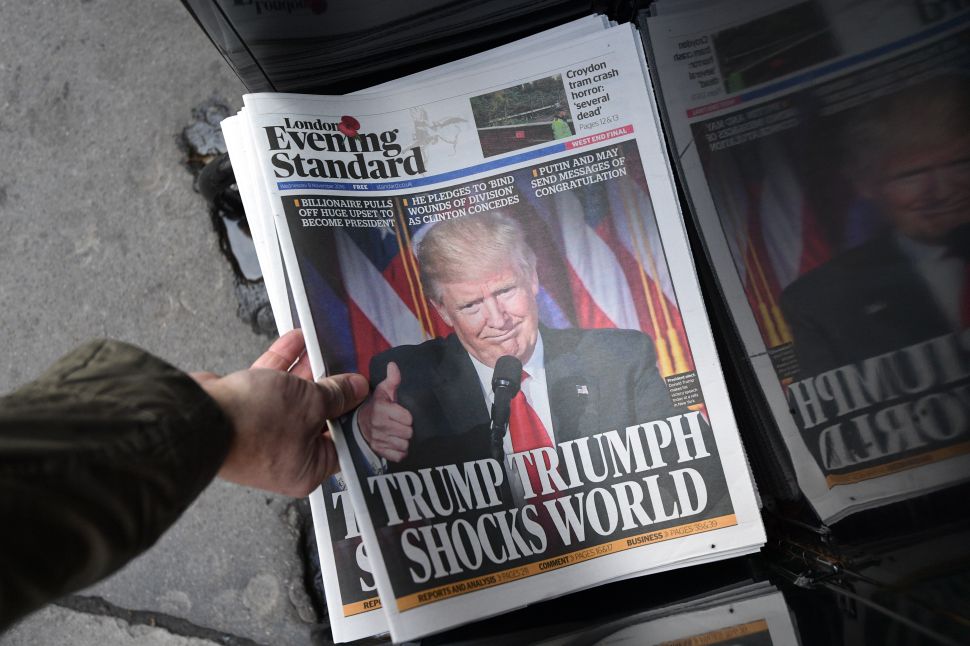