PITTSBURGH—Donald Trump won. His strategy—broaden the Republican coalition by bothering to craft a message to America’s displaced and forgotten working class—worked. He prevailed in Ohio, West Virginia, Pennsylvania and Michigan. The Rust Belt.

A commonly misused word, “epic” applies here. The Trump campaign was like one of those long poems from antiquity where the flawed hero makes his way past Sirens and Cyclops building tension toward a sword clashing denouement.

In the end, Trump vanquished the greatest enemy of all: conventional wisdom. He began his campaign defeating the very slack-jowled personification of safe-pick in the person of Jeb Bush, the preferred candidate of the conventionally wise.

That he defeated Bush should have been the first clue that the electorate was in a mood for something transformative. Nobody wanted another Bush. And on the Democratic side a similar mood coalesced around the idea of another Clinton.

The grass roots in both parties felt the same burn.

The thing about convention is that it’s defined by its ability to thwart change. Well-funded, connected, establishments in both political parties set to work to protect themselves—as establishments do.

The DNC defeated its own grassroots movement by coordination between the party and the preferred candidate. WikiLeaks confirmed the scale and the scope of this, in all of its sordid detail.

Party chairperson Debbie Wasserman Schultz resigned over her part in the dirty tricks, but the candidate who benefitted from the cheating was nominated nevertheless.

The Republican side, to its credit, let the primary process play out without official interference, however longingly some Republican leaders wished for things like brokered conventions.

Republican political consultants had insisted for two decades that it is necessary to build a 50 percent plus .01 percent winning strategy by carefully crafting a message around focus group-approved dreck.

Donald Trump rejected the experts. He seemed willing to lose the flock—the 50 percent—to find the lost sheep for whom focus-approved dreck had brought wildly perverse results.

To those who expected the chief executive to comply with his basic oath to defend the Constitution, he promised to enforce the immigration laws that Congress had passed.

To those asked to lend blood and treasure to fight wars for abstractions wrapped in triumph, he promised a foreign policy that put American interests first.

In the primaries, Trump faced 16 Reagan-quoting policy wonks, who proposed things like marginal tax rate cuts won by making concessions on amnesty, and other such brilliances. They did not consider Trump a threat.

Even the United States senators in the race with the audacity to run as Washington outsiders treated Trump first as an adorable novelty—and then, when it looked like he might win, a downright danger to civilization.

They lost, as Trump himself would say, big-time. And when it was time to lick their wounds and rally around the candidate, most did so with differing degrees of reluctance.

John Kasich’s opposition to Trump cast him as decent and thoughtful in The Washington Post. Ted Cruz’s ostensible stand on principle made him some sort of shipwrecked Paulian figure to those members of the Washington establishment who engage in Republican advocacy as an act of redemption.

The Bushes and Mitt Romney, who had in their own candidacies benefitted greatly by appeals to party loyalty, turned on Trump, both with harsh criticisms and at the ballot box.

There is a moment in the movie Stalag 17 when the rogue patriot speaks of the beating he received from his fellow-prisoners as he moved stealthily to identify the German spy embedded in their barracks.

He said of the German spy: “Just one of the boys. Sharing our bunks. Eating our chow. Right in amongst the ones that beat me up. Except that he beat hardest.”

One of the benefits of Trump’s election is that Republican voters now know who among them happens to be fighting for the other team. They are the ones who beat Trump the hardest over these last few months.

The next few news cycles will be dominated by rejected Washingtonians who say that it proves America’s essential meanness and bigotry.

That is simply whining from the defeated. This election proves that Americans remain sufficiently magnanimous and open-minded to reject a set of governing principles that are stupid.

The story of this election is that America elected an outsider who dared to propose policies not drawn from the white papers of establishment think tanks—an establishment that grew detached in its own self-absorption.

The Republican Party, today, is firmly attached. Not to political abstractions, but to working class voters in Ohio, West Virginia, Pennsylvania and Michigan. It is a major realignment.

The voters, in the end, got the transformative election that they wanted. 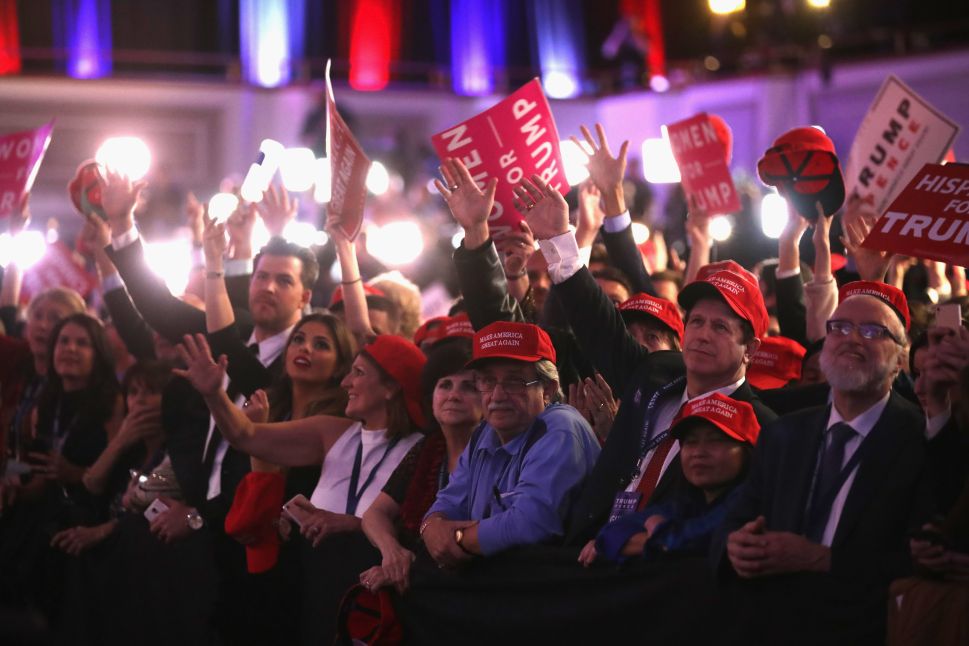