On December 4, 2,000 veterans will be deploying at Standing Rock to join the protectors’ efforts to stop the Dakota Access Pipeline.

A GoFundMe to raise money for the veterans to travel to Standing Rock has received half a million dollars in support. The veterans are coordinating directly with the elders of the Standing Rock Sioux.

“Everyday becomes more evident that the defenders of America must stand with the Protectors,” Wesley Clark, who started the GoFundMe, wrote on the fundraising page. “Let’s stop this savage injustice being committed right here at home. If not us, who? If not now, when? Are you a hero? Are you honorable? Not if you allow this the be the United States.”

If construction is completed, the Dakota Access Pipeline will transport up to 570,000 barrels of crude oil daily from North Dakota to Illinois, crossing under the Missouri River and putting the source for the Standing Rock Sioux in jeopardy. The pipeline’s operator, Sunoco Logistics, tops charts in the United States for crude oil spills, and the pipeline’s construction has already desecrated sacred burial sites of the Sioux.

The veterans will be joined by Tulsi Gabbard, the Democratic representative from Hawaii, who has developed a positive reputation among Republicans and Democrats alike.

“Next weekend, the congresswoman will be joining thousands of veterans from across the country to stand in solidarity with the Standing Rock Sioux in North Dakota who are protesting the construction of the Dakota Access Pipeline through their tribal lands, with grave concerns about the contamination of their major source,” Gabbard’s Press Secretary Emily Latimer confirmed in an email to the Observer.

Gabbard rose to popularity with Bernie Sanders supporters after she spoke out as Democratic National Committee (DNC) vice chair about the lack of debates scheduled by then-chair Debbie Wasserman Schultz during the Democratic primaries. After the South Carolina Democratic primary, Gabbard formally resigned from the DNC to join Sanders as a surrogate for his campaign.

Gabbard is an Iraq War veteran and continues to serve as a major in the National Guard. She has been one of the most vocal opponents to interventionist U.S. foreign policy, which was the subject of a meeting she had with President-elect Donald Trump, inciting speculation that she was being considered for a role in his administration. 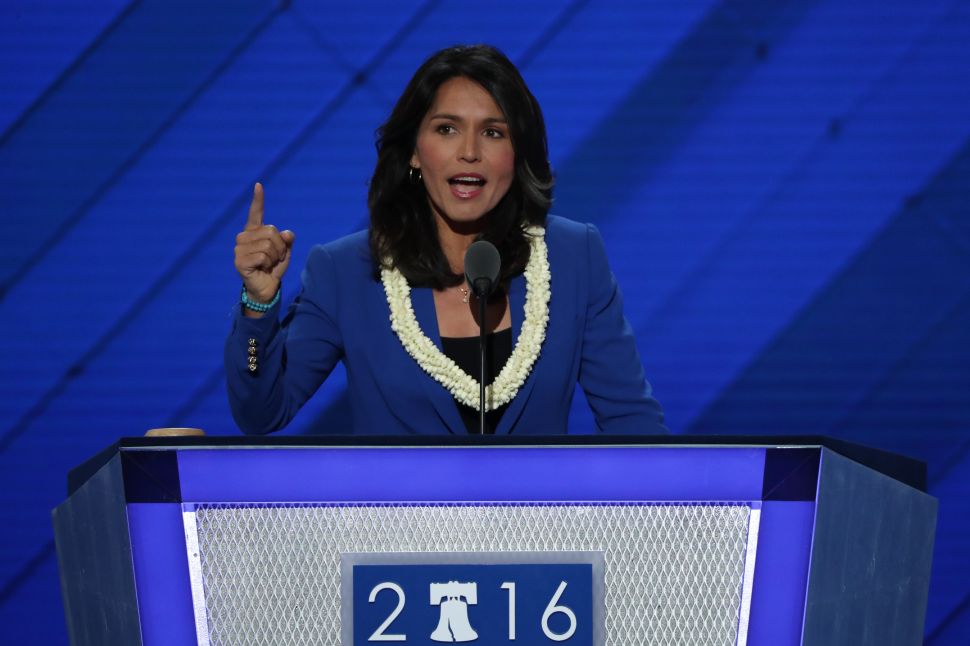