A line of 75 people stood outside the Trader Joe’s between Court Street and Atlantic Avenue in Brooklyn late one evening. But it wasn’t to pick up the latest in cookie butter or chimichurri rice. No, it was to sneak underground through a manhole under the dark cover of night. Every time the light changed at the intersection, groups of five scurried into the road to slip below Cobble Hill to get a glimpse of the world’s oldest subway tunnel, rediscovered by Bob Diamond.

“Nobody knew it existed. It was sort of like a historical myth,” said Justin Rivers, tour guide for Untapped Cities.  “Some people said that bootleggers used it to store bootleg liquor, that pirates used it to store stolen goods, that it was a haven for underground crime, but nobody confirmed or denied its existence.”

In 1980, an engineering student by the name of Bob Diamond was listening to a radio show while writing a paper in the middle of the night. He heard the show discussing a phantom train tunnel that supposedly ran under Atlantic Avenue.

After a year of research, Diamond finally found the blueprints to the now 176 year old passageway. Diamond went to the intersection above the 400 foot mystery tunnel and climbed down through a manhole. He bribed the gas guys who were working that night to let him in.

“He dug for two nights and he finally broke through and found the tunnel,” said Rivers. The tunnel, built in 1840, predated any subway system in the world. Diamond then proceeded to give his own makeshift tours of the tunnel up until 2009 when the city caught on and shut him down.

“I was lucky enough to be on one of his tours,” grinned Rivers. “It was amazing because anything you found was from 1860 when they finally shut the tunnel. So if there was a lantern or a shovel on the side of the way, it was rotting away from 1860.”

“Bob Diamond swore that at the end of this tunnel – he brought us to the end, there was a walled up section to it – that an old 1860 locomotive was sealed up behind there,” Rivers continued. “This tunnel still exists, it’s still there.”

Over four decades later, the first subway line opened in 1904 to big fanfare at City Hall station, which is no longer running today. Like the cryptic tunnel below Atlantic Avenue, the station at City Hall is shrouded in mystery. It was intended for the very wealthy, with chandeliers, a goldfish pond, a grand piano and even cars upholstered with velvet cushions – a far cry from the subways of today. “A lot of people are interested in City Hall Station but unfortunately not even Jesus himself can get access unless he’s a member of the transit museum,” said Rivers.

Chambers Street hosts another ambitious station, carefully nestled away from the bustle of the city. Lofty vaulted ceilings and soaring arches of white tile welcome riders to bygone eras outside the entrance to the Municipal building downtown, built in 1912. “The scale, the grandiosity. They’re buildings that make you feel important. They’re buildings that make you feel the city is important,” Rivers explained.

Even with the opulent displays, New Yorkers found something to criticize. “Because New Yorkers love to complain, by the second month of the services, they were already doing political cartoons complaining about subway service.”

As part of the second subway system to come into existence, the city anticipated that the Chambers Street station would be so busy that it would serve as The Grand Central of downtown. It is still in use today but many of the platforms were shut down in 1930, leaving eerily deserted tunnels in the swanky station.

Now, the JZ platform services only 3,200 people a day, some of the lowest ridership stats of any station in the system. “This station in its height would have been so crowded that people would’ve fallen off the platforms,” said Rivers. “Now, it’s virtually abandoned.”

Speaking of abandoned subway platforms, the Lowline is projected to open in 2021 as the world’s first underground park. The site now sits empty as a neglected subway platform from when it functioned as the Williamsburg Bridge Trolley Terminal, still laced with intertwining rail tracks. It has been out of use since 1948 after trolley service between Brooklyn and Manhattan was discontinued.

“The idea came to be when the High Line was getting such press, that why don’t we repurpose this trolley terminal as a Lowline?” explained Rivers. “They said, well, that’s great but how are you going to grow plants down there?”

The Lowline Lab is an exhibit open to visitors on weekends through March 2017 showcasing the plans for the Lowline site. The Lab is located inside an abandoned market two blocks from the site of the future Lowline, which will be inside Essex Street station.

With an electric blue hue, music bumping and crowds milling about, it feels more like a club than a technical exhibition. In the center of the windowless space, there is a jungle of plants and vegetation, some twisting out of the ground and others dripping down from the ceiling.

All have been grown using the same system that will be installed in the Lowline park – optical lights installed onto the roof that harvest and direct natural sunlight inside the dark room. Plastic tubes and directional mirrors guide the light to a central point inside the building and the light is condensed into a super-intense beam thirty times the brightness of the sun. The landscape, designed by Signe Nielsen of Mathew Nielsen, was constructed beneath the solar canopy.

The lush plants thrive in the indirect light like a whimsical forest clearing underground. Imagine a secret garden in the middle of a subway platform, with pathways covered in green moss and twirling vines. While we all know the fate of our beloved L train, as one line closes, another will be reborn. 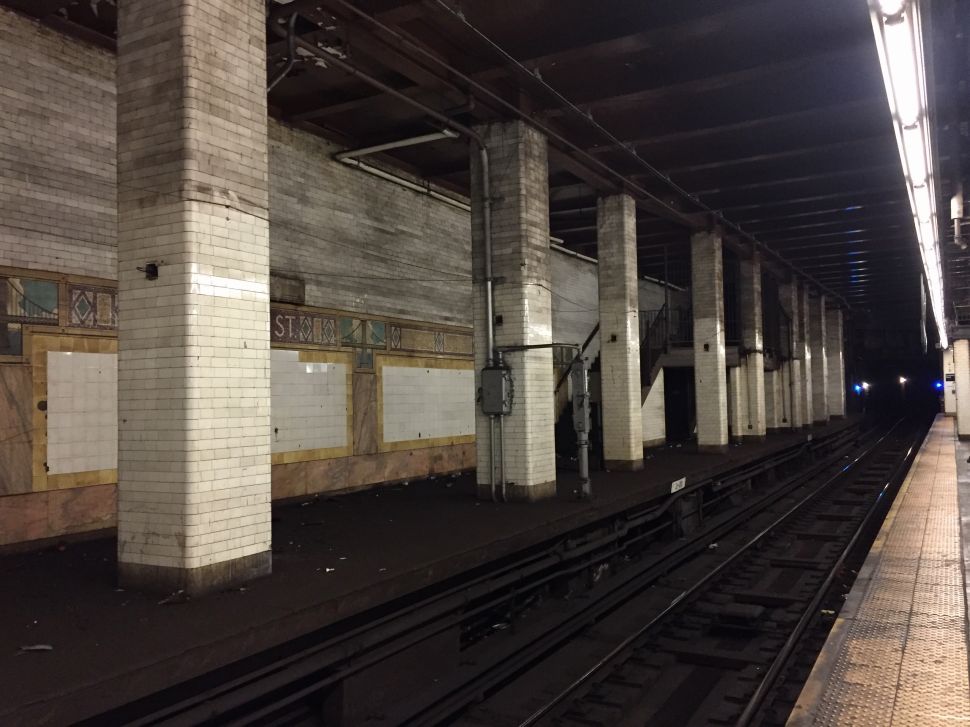