It is an age-old question—is fashion is art? That is what the Costume Institute at the Met Museum has set out to answer with its latest exhibition, Masterworks: Unpacking Fashion, pieced together by Assistant Curator Jessica Regan.

The “unpacking” in the title of the exhibit has a dual meaning — it can be taken in its literal sense, evoking the image of curators and conservators combing through the vast Costume Institute archive, unpacking garments from their tombs of preservation to be put on display for the masses. It also serves to explain why the clothes are displayed on top of platforms resembling crates, as if the clothes had only just arrived at the museum.

But “unpacking” can also refer to a conceptual, academic idea, where something is taken apart and analyzed. In this vein, the clothes are not just analyzed and examined within their historical context, but in how and why The Met came to acquire these garments over the past ten years.

This exhibit brings together 50 garments that represent the best the museum has managed to acquire over the past ten years. For a long time, the Institute focused on collecting pieces that would help create a comprehensive, encyclopedic archive of the best in fashion history. But, under the tenure of Harold Koda, that mentality shifted to obtaining clothing that were more like works of art, “masterworks,” if you will, that are on par with the Van Gogh’s and Degas’ found elsewhere in the museum.

“This decision reflects our broader mission to present costume as a living art that interprets history and becomes a part of the historical process,” explained Andrew Bolton, the Costume Institute’s curator-in-charge.

Before you enter the exhibition, at the bottom of the wide staircase, stands a Fall/Winter 2015 Victor & Rolf splattered dress, affixed to a gilded wooden frame. That dress was part of the couture show that posed the question “is fashion art?,” by making clothes literal canvases. As the show progressed, the designers took the frames off of models and hung them, like paintings, onto the wall. This frock is the perfect introduction to an exhibition that celebrates the fluidity and consonance between fashion and art.

The exhibition is organized chronologically, with the 18th century represented with extravagant robes à la Française displayed alongside less dramatic, but no less breathtaking, robes à la Anglaise. It then moves on the the 19th century and the innovations of Charles Worth, the father of haute couture. It then glides through the early 20th century, showcasing innovators like Charles James and Madeline Vionnet. Then, the exhibition becomes increasingly muddled, with no real sense of time, as it delves into contemporary designer influences. A vibrant, abstract red ensemble by Comme Des Garçons’ Rei Kawakubo is displayed next to its inspiration: a 1760s bordeaux velvet pannier. A red wool cropped jacket with a chiffon train by John Galliano during his current Maison Margiela era is displayed next to a tightly-fitted red wool men’s coat from the late 18th century.

But this muddling of time is precisely the point. As with any good collection, the more connections and influences you can discern, the more cohesive the collection is. It becomes more than a chronological recording of historical trends; it becomes a part of a conversation on style that spans centuries. “This is a reminder of Harold’s conviction that the artistry of the past can be enlivened by that of the present-day. And the significance of contemporary work clarified when anchored in the broader narrative of history,” said Regan.

The exhibition culminates in the Apfel room, which is a sort of a visual love letter to Harold Koda, who retired in January 2015, after 14 years with the museum. Clearly, he had a major impact on both the objects on display and the fashion world at large. A selection of pieces donated specifically for this exhibition are showcased next to testimonials by each designer about Koda. It is an odd, sentimental touch for a museum — an institution known for its reverence of history and rigorous analysis. But that sentimentality and ability to make this personal is what grounds the narrative structure of the exhibition. And beyond the sumptuous fabrics and dazzlingly innovative designs, it’s what makes this exhibition so compelling.

Masterworks: Unpacking Fashion is currently on display  until February 5, 2017 at The Costume Institute at the Metropolitan Museum of Art, located at 1000 Fifth Avenue. The hours are Sunday-Thursday: 10 a.m – 5:30 p.m, and Friday and Saturday from 10 a.m to 9 p.m. 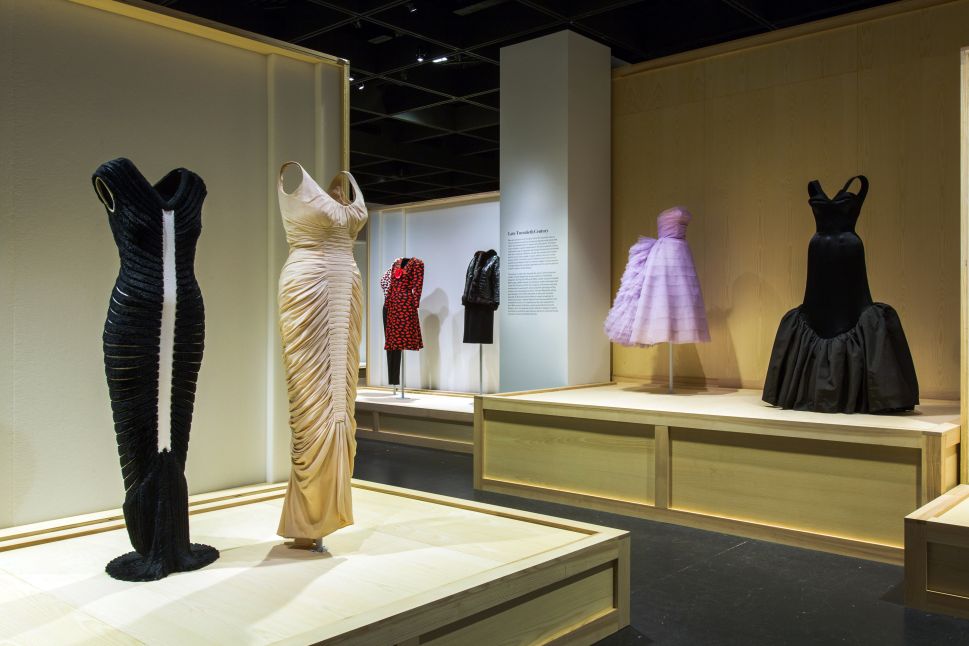