Welcome to our TV Fashion column, where TV Ate My Wardrobe‘s Emma Fraser discusses the trends in television apparel. This week: How Crazy Ex-Girlfriend and its star Rachel Bloom constantly reinvent through wardrobe.

Post breakup hair/style changes are not out of the ordinary, so when on Crazy Ex-Girlfriend Rebecca loses not one, but maybe two loves of her life an extreme reaction is to be expected. Rebecca as we have seen from the pilot episode is also prone to rash decisions; seeing signs in random encounters and leaving a lucrative job (that was making her miserable) to follow her heart. Rebecca’s cross country grand romantic gesture is one to herself wrapped up in the feelings for her first love and everything that has followed is in reaction to this.

Rebecca knows it sounds super pathetic as she ponders her sense of self “I don’t know who I am without them” and she responds with resounding revulsion when Paula tells her to “be herself.” It is a big question for both Rebecca and Crazy Ex-Girlfriend as reinvention has been a key part of Rebecca’s Josh strategy; first by attempting to act chill about her reasons for leaving New York and finally revealing the truth about why she came to West Covina in the season one finale. There is a whole mess of feelings going on and, as with Jane the Virgin, fantasy sequences are one way of conveying truths characters otherwise might bury deep. We get to see every version of Rebecca through the form of song and her hopes, dreams and mental health are all put under the spotlight in a manner which is often funny, and always illuminating.

When Greg recognizes how unhealthy his union with Rebecca is no matter how incredible their chemistry is he leaves West Covina to pursue a Rebecca Bunch-free life in Atlanta, leaving Rebecca in a tailspin of emotions. It doesn’t matter if they go to a hotel and have sex before he goes because it will still be a messy goodbye and they will still be emotionally messy wrecks. One person’s relationship dysfunction and self-loathing is not the quick fix for another person who does not have their shit together. If there is a theme for “When Will Josh and His Friends Leave Me Alone?” then it is probably feces (complete sidebar but I can’t hear this word and not think of Donnie Darko).

Rebecca sees her exes all over her house as they come to her in the form of “Memory Spirits” or the more pun friendly “Polter-guys” and do a delightfully smutty tap number detailing how entrenched both Josh and Greg are in every nook of her home and psyche. The boyfriend bonfire is meant to cleanse Rebecca of their presence and instead she does the classic sitcom thing by setting the whole place on fire (see also: Friends).

What follows is a super humiliating experience as her 911 call tape is put on YouTube and it features the not so bonus extra material of deification on top of the sadness. And you thought the only reference to shit would be Greg singing about how their relationship is “a play about pieces of feces.” Meanwhile at work they are representing the brand “Miss Douche” a company whose CEO is Jane the Virgin’s Yael Grobglas and they are looking to change how their product is perceived by rebranding and reclaiming the word “douche.” This desire to start over taps into Rebecca’s current predicament of working out who she is while changing her public image from “crazy 911” lady. She feels like she needs to show Josh, Greg and everyone she knows that she isn’t like the girl in that soul crushing YouTube video; she has her act together.

Makeover scenes are a rom-com staple and there is nothing quite like the cheesiness of one of these montages as we see our lead get transformed; but under the playful cheery vibe of picking out the ideal outfit, plastering on the makeup and changing your hair is the darkness of the old you being a shitty version incapable of being loved. Or the ridiculous notion that something as simple as taking off your glasses and letting your hair down makes a person instantly bang-able (when the original version was just as hot).

Of course makeovers are not always about painting over the cracks and sadness; sometimes it is to mess with the contestants on America’s Next Top Model. But Rebecca’s “Hey Mickey” inspired bubblegum pop makeover anthem complete with cheerleader outfit, sexy baby vocals and lyrics such as “Old you was a diaper, new you is a diamond” focuses on how ridiculous it is to think that this will be the answer to breakup sadness. It devolves into the repeated line of “I had a stroke” emphasizing how nonsensical it is. Rebecca ends up looking like she should be starring on Kroll Show’s “PubLIZity” complete with fake nails, blonde hair extensions, a sparkly unicorn fake tattoo and an entirely new wardrobe. All to prove she is okay to Josh, Greg and everyone who has seen that 911 call video.

The Miss Douche contest is Instagram based and Rebecca has taken her “effortless” makeover cues from the popular boho chic styling of the posts with the most likes. When she runs into Josh he talks about being on an internet cleanse (how very Kendall Jenner) and he thinks she is in a costume contest due to her new look. When asked on stage “Who are you?” it sets her free in a way that her glued on hair could never do as Rebecca acknowledges that she is not okay.

Rebecca was the girl who pretended she was a ping pong pro just so she could hang with Josh away from the apartment they somehow ended up cohabiting and the start of season 2 has been about exorcising the people that are an emotional burden.

For Greg this means leaving West Covina for good (*sob*) and while I think Crazy Ex-Girlfriend will miss this dynamic, I am also excited to see where the show can head now the love triangle element has been broken. The season 2 opening credits are incredibly Josh-centric, but considering how this relationship has played out so far this whole “girl in love” vibe should instead refocus on Rebecca learning how to love herself. By moving in with Heather it will give Rebecca the chance to enjoy all the sarcasm without the romantic drama. Plus this means more Heather, which is always a good thing.

Instead of pretending to be the ideal Miss Douche, “Ping Pong Girl” or the breathy and faux dumb Marilyn Monroe like figure, Rebecca returns to her old look and while ultimately her decision to move away from what was making her miserable in New York was a good one, she has stumbled by equating happiness with romantic happiness.

When Greg ‘Sinatra’ croons that their relationship is a “shit show” it is hard for Rebecca to disagree and her entire time in West Covina has been part of this love triangle caught between the guy she thinks she loves and the messed up guy who could be perfect for her if she wasn’t so messed up. Bouncing from one to the other is far from healthy and Greg’s departure/her realization that Josh isn’t exactly attentive or THE ONE (maybe) means Rebecca can lay her focus elsewhere. One person who could do with this right now is Paula and Rebecca can be a pretty terrible friend giving off Carrie Bradshaw self-centered vibes. Seriously Carrie, brunch shouldn’t always be about your terrible relationships.

The post breakup makeover critique combined with how the carefully curated Instagram posts can be is exactly what Rebecca needs to understand that she needs to focus on herself and not her wardrobe. It’s what is on the inside that’s the problem, and this means saying goodbye for real and in her head to Greg; she needs to move on. We are entering unchartered Crazy Ex-Girlfriend territory and the only post breakup(s) makeover Rebecca needs right now is on the inside. Plus, her look is already super cute. 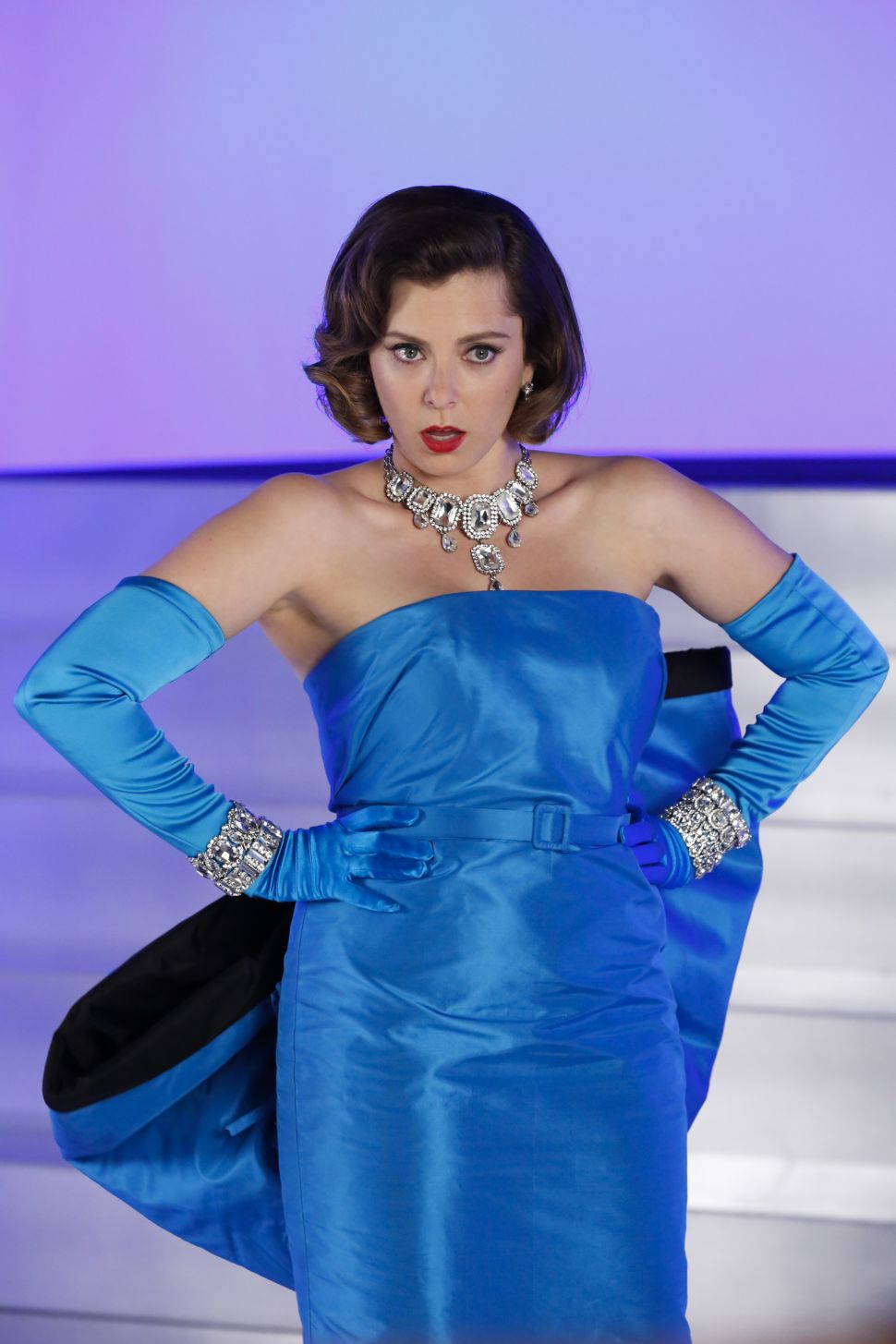