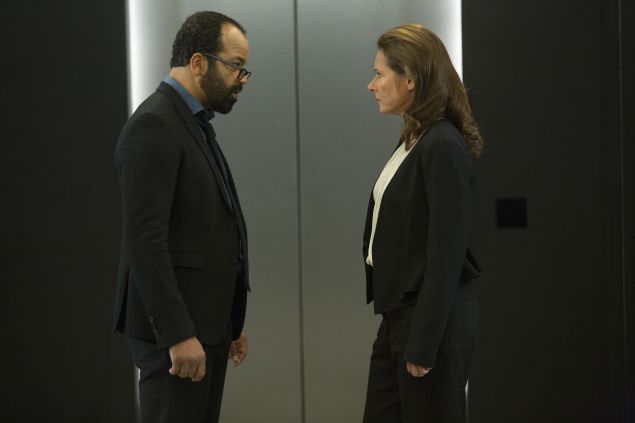 Drew: Wow, what a night in Westworld! No joke, “Trompe L’oeil” might have been my favorite episode yet, and not just because it offered the first glimmer of escapism entertainment I’ve had all week. Though, holy hell, that William and Dolores storyline was hitting Princess Bride-levels of oxytocin release. What a romantic adventure!!!

Vinnie: You know, up until right now I’d only heard people say the title out loud, and I like this episode a LOT better now that I know it’s not called Trump L’Oreal, which is a brand of skincare products I would not recommend to anyone.

Drew: But before we get into that, let’s dive right in and address get the robot elephant in the robot room making other robot elephants (this is a perfect analogy): Clementine’s former storyline involved her being Elektra?!??

Jkjkjk: the real WTF of the episode was discovering that Bernard–our sweet, programmer, forever stuck waiting for his luggage at emotional baggage claim–is himself a Host, created by Ford.  And then in a double womp-womp, Ford commands Bernard to dispatch his ex-coworker-with-benefits, Princess Elsa of Quality Assurance.

Vinnie: Listen, part of me wants to harp on the fact that Westworld can’t keep pulling the “Actually THIS character’s a robot too!” snake out of its boot until it loses impact. It’s been doing it since the pilot–since the first ten minutes, really–when it was revealed James Marsden is a robot in the show and not just in real life.

But damn it, damn it straight to the depths of Ed Harris’ forehead wrinkles, the ways Westworld finds to repeatedly drop that particular bomb on us are just so damn effective. First it was Teddy realizing he can’t kill the Man in Black in the premiere. Then there that was Unnamed Sexy Robot Lady #4 who told William “if you can’t tell, does it matter,” which both as a concept and a line of dialogue has a whole host (lol) of problems but is also pretty much this show’s entire thesis. And now, you have Bernard’s big reveal line–”Doesn’t look like anything to me”–which has been dropped so casually and so often by Hosts throughout seven episodes that we knew it would be important, we just didn’t know when.

Drew: Now Vinnie, I know we like to spin some great TV crossover yarns, but don’t you think it’s a LITTLE weird that both Gotham and Westworld decided to go full Lewis Carroll this season? In the opening of the episode, we flashback to Bernard reading Alice in Wonderland to his son in the hospital room before he died (though is it a flashback if NONE OF IT EVER HAPPENED?) and quotes the Mad Hatter saying “if I had a world of my own, everything would be nonsense. Nothing would be what it is, and everything would be what it isn’t!”

Vinnie: First of all, hello to the 95 percent of you that forgot Gotham is a show on TV. It’s fun!

Second of all, in this little bed-time-story-but-actually-super-heavy-foreshadowing scenario, is Robert Ford the Mad Hatter? I’m not just saying this because I’d pay double my HBO subscription fee to see Anthony Hopkins in a top hat. Ford said it himself, right before he murdered Cullen via Jeffrey Wright: “Like I said, I built all this.” Ford is clearly on a banagrams control-freak tip–he’s committing real murder to maintain creative control. Like, hello, just bring your pilot to Netflix–and in this new Westworld he’s shaping, well, yeah, pretty much nothing is what it is and everything is what it isn’t.

Drew: Also, Bernard’s son takes this SUPER personally, for some reason. “Everything would be what it isn’t?” he repeats. “Even…me.”

First of all: hey kid, not everything is about you.

Drew: Secondly: In this particular instance though, it definitely was.

Vinnie: Nice, double dead kid burn, and also accurate. Yeah, this is one of those “so obviously foreshadowing that you don’t believe it’s foreshadowing” situations. That opening scene cut off right before Bernard’s son was like “What do you know about Lewis Carroll dad you’re a robot as will be revealed by episode’s end” and Bernard pulling an Office face at the camera.

Drew: But remember how Bernard was trying to get Dolores all woke up a couple eps back by having her read Alice in Wonderland, and it made her start questioning her reality? It’s the same copy, Bernard tells her, that he had read to his son. But now that we know Bernard and his memories are just as artificial as Dolores’…who gave Bernard that idea? His son saying “everything is what it isn’t…even me,” in this context makes you realize it was a big fucking CLUE, buried in Bernard’s consciousness this whole time.

So who gave Bernard that clue? Ford? Doubtful. I’m going to assume it was Arnold. We know Bernard’s been with the company “forever,” so he might even be one of the first hosts. In which case…ugh, did HE get the buggy upgrade with the reveries as well? 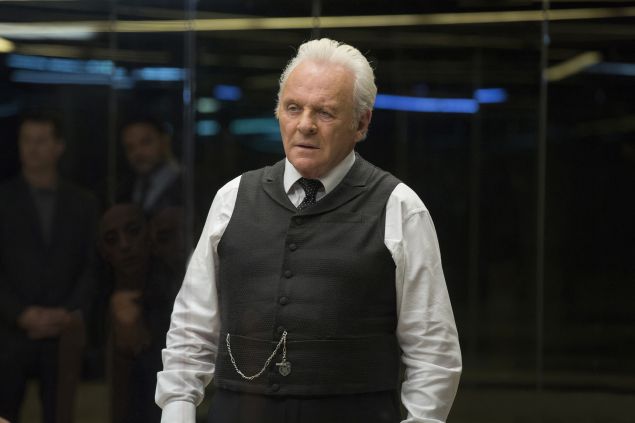 Vinnie: So, fucking shocker I know, but there’s a theory out there that Bernard–Host Bernard–is an exact copy of what Arnold looked like (the picture we saw of Arnold that one time was Bernard pulling a “doesn’t look like anything to me”). What THIS means is those scenes between Dolores and Bernard were actually scenes between Dolores and Arnold, which I guess might mean those memories of Bernard’s son are….real…memories? Ugh. I don’t know. We’re really riding a train full of explosives through scalping country with that one.

Drew: Follow-up question: do you think Bernard really “killed” Theresa, or is it going to turn out she was also a host, manufactured not by Ford/Westworld but by the board. Ford keeps mentioning how she’s just one of many Q.A. Directors the board sends over to thwart him. “I think they like to test me,” he tells Theresa just before she bites it. “It’s like a little game we have.” Since Ford also seemed to know EVERYTHING about Ms. Cullen (including where she once sat with her parents in what I can only assume was the world’s most unnecessarily expensive lunch ever), it’s possible that she’s a board-manufactured host herself. That could also explain why Ford is just super blasé about murder.

I mean, it’s also totally possible the dude is an ice-cold sociopath, but considering they cast Hannibal Lector to play Ford, I’m rooting for the not-so-on-the-nose answer.

Vinnie: My rebuttal? Nah, she dead. Like I said, this show is going to lose a lot of steam if it keeps revealing that it only killed off a robot, not a person. That’s pretty much all that’s separating this prestige HBO drama and an episode of Battlebots.

Drew: So, now that we opened up the can of worms that is “not all hosts exist in the park,” is there any point speculating that EVERYONE might be a robot? Like, every single person on the show? God, that’s a real chore to consider: like this is post-singularity but one in which (most) robots are unaware they are robots? I’m surprised the estate of Philip K. Dick hasn’t freaked out about this, Harlan Ellison-style.

Vinnie: Wow, Drew, someone needs to turn up your “Bulk Listening to Vinnie’s Half of the Recap” because that’s totally already my theory. Except…I’ve kind of cooled on it. I still think a lot of people are secretly robots, but not Cullen (who is dead), and definitely not Ford. In fact, I wouldn’t be surprised if a majority of things we’ve seen are just Ford amusing himself because he just wants to “tell his stories” but also kind of went insane and thinks he’s robot god? I mean, what a great, Animal Farm-ass line he delivered: “The hosts are the ones that are free. Free, here, under my control.” I think, with 3 episodes to go, Ford is being positioned into that Big Bad role, because this show never really had one. Unless, of course, you count the Man in Black, but he’s still basically a middle-aged divorcee who keeps spiking the ball in his neighborhood’s “No Spiking Allowed” volleyball rec league.

Drew: Okay, so back to the best (AKA sexiest) part of the episode: Dolores and William finally smash, and it’s way more electrically charged of a moment than it has right to be. Because first of all, VP of Beta Males William finally admits to Dolores that he has a fiancé, and she gets a little miffed…but somehow doesn’t feel the need to respond with a reference to Teddy? Poor Teddy, who is busy smashing (in a different way) through a billion soldiers to get to save his precious Prime Directive of the Heart? Who said Hosts can’t lie by omission??

I guess no one actually said that, at any time. But still, Dolores is being totally sketchy. 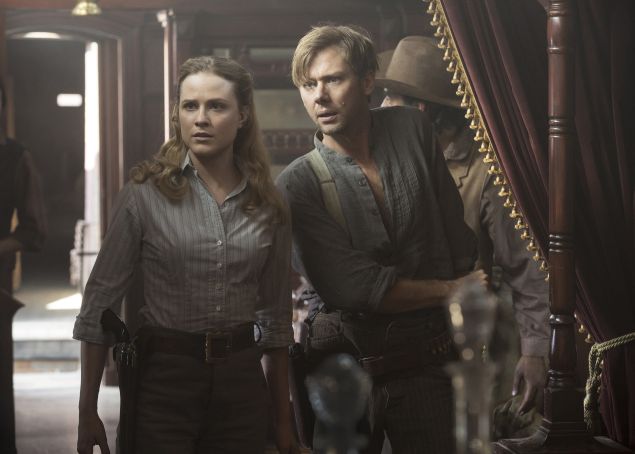 Drew: And what is William’s plan here? That he just…stays in Westworld forever? He says there is no going back, but I don’t know, eventually the park would revoke his voucher or something, right?

Vinnie: Amid all this “Bernard is actually a host” hullabaloo I think we all forgot the OG Westworld theory, William = The Man in Black, which this episode basically, like 96 percent, confirmed or is trying REALLY hard to make us think it’s too obvious. Isn’t that basically the Man in Black’s goal, to live in Westworld AND/OR find out what it all really means, maaan? That’s…basically what William tells Dolores: “The only thing I had as a kid were books. I used to live in them. This place, this is like I woke up in one of them. I guess I just wanna find out what it means.”

First of all: haha, nerd.

Second of all, to recap: Bernard is a host but also maybe Arnold, William is totally the Man in Black, Dolores is super important to EVERYONE but we have absolutely no idea why, Clementine is a ninja, and Maeve is threatening to kill people and that threat should still hold absolutely no weight she is a robot just turn her off or shoot her or what’s happening with that??

Drew: Anyway, thanks Westworld, for this hour of distraction featuring robot cowboys and corporate espionage. Now back to our regularly scheduled programming of WATCHING THE WORLD BURN.

Vinnie: *Turns Bulk Apperception down to zero* *Logs onto Facebook to argue politics with relatives* 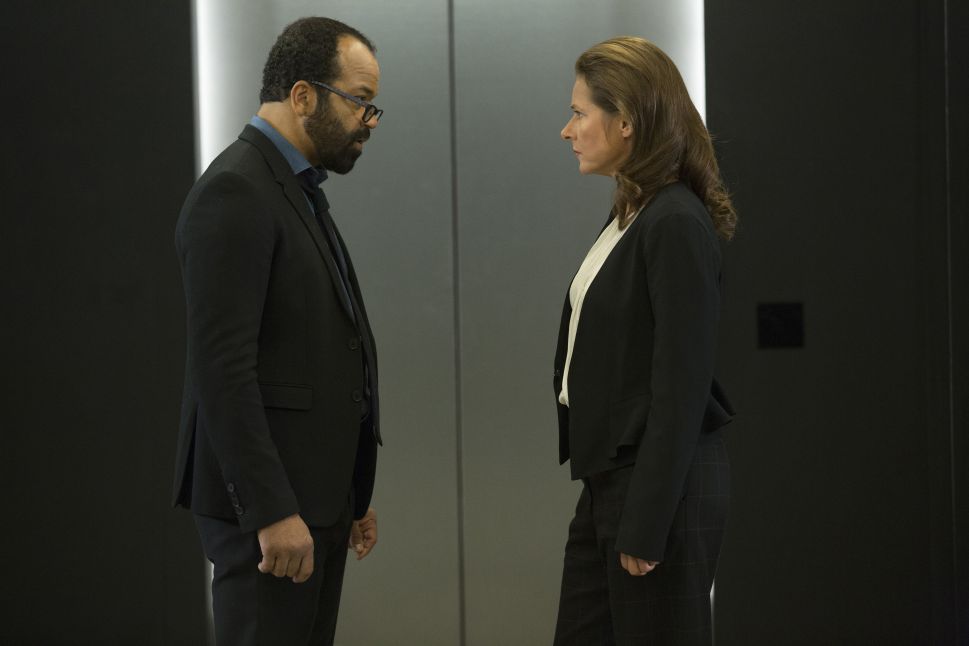