At least fifty percent of America feels like crap right now, me included. Don’t get me started about my draft-age son. What do we Americans do when we feel our tits in a wringer, when the economy craters, when our dream romance becomes a bloody horror show – when a rate bites us in our bed? We go to the movies, we binge watch television. Or we kill virtual enemies with our dexterous, dancing thumbs.

I’m not saying the rage will stop today, or that someone won’t grab your pussy tomorrow, but I want to share some cultural progress that’s going to keep on happening whoever’s in the White House.

When we talked to Loving star Ruth Negga during the Toronto Film Festival, she said: “All people need, all women need, is the opportunity.” We are committed to keeping those cultural openings open and not giving up until we achieve equality. Do your part by going to see this fantastic historical drama about Mildred and Richard Loving, an unassuming interracial working class couple whose demand to be wed in the segregated south of the 1950s brought the wrath of the Virginia legal system down on their heads. They will not have fought in vain.

The African American (and Mixed Race) Actresses of Luke Cage

This show is fantastic, from its Harlem locations to its literate nods to Black genre writers Walter Mosley and Donald Goines, to its one-two punch of Mike Colter and Oscar hopeful Mahershala Ali. But those many, many actresses of color in dynamic roles as detectives, politicians, journalists and crime kingpins — scene-stealer Alfre Woodard unleashed, Simone Missick, Rosario Dawson, Karen Pittman, Deborah Ayorinde, Tijuana Ricks, Dawn Lyen-Gardner and many more. This well of talent, fresh faces and familiar ones, always gives me hope – and breaks that Marvel mold of women being the only girl in the squad in the sexed-up Scarlett Johansson Black Widow mold.

The Kickass Stylings of Jessica Chastain

Look out for the upcoming Washington insider drama Miss Sloane where Jessica Chastain embodies a win-at-all-costs lobbyist who takes on the gun lobby just because she’s that badass. Let’s not beat around the bush: our Miss Sloane is no squeaky clean crusading sex object trying, oh my, to balance job and family, dripping baby’s organic yams on her Prada dress. When she needs romantic release she dials up a male hooker – and, please, no chatter! This is not Pretty Woman or American Gigolo! Sloane walks the walk and talks the talk in stilettos – and so does Chastain. Recently, in a Variety interview, the Zero Dark Thirty star told me: “I’ve always worked with female directors. I’m looking to work with a female filmmaker every year. That’s my goal. They’re not given the same opportunities so if I have any influence in choosing a film or a script or finding a director I’m absolutely going to make a difference.”

Director Ava DuVernay Will Not Take No For an Answer

In her recent, starkly moving documentary, 13th, the Selma director walks audiences through the anti-slavery Amendment of the Constitution – and the continuing institutional racism still evident in the mass incarceration of Black men in private prisons. If you haven’t already, watch it now on Netflix. She has climbed her way through the ranks, paid her dues and, now, with her version of A Wrinkle in Time on the horizon, and OWN’s Queen Sugar, she will not step aside, she will not back down. She is an inspirational cultural leader for our times. And, at the center of her rallying cry, is make art not war, make truth not lies.

SNL‘s Kate McKinnon, like one of Hemingway’s army nurses, got us through the trenches of the most fractious election in living memory. Put her in a red pantsuit playing Hilary Clinton opposite Alec Baldwin’s Donald Trump and she conveyed the triumph and the tragedy of being the former first lady who would be President. She emerged from these last months as the funniest woman on TV, capable of going for a laugh, her face a mobile battlefield of contradictions — but never losing sight of the vulnerable humanity beneath the focus-grouped designer clothes. Kate, you have my vote. 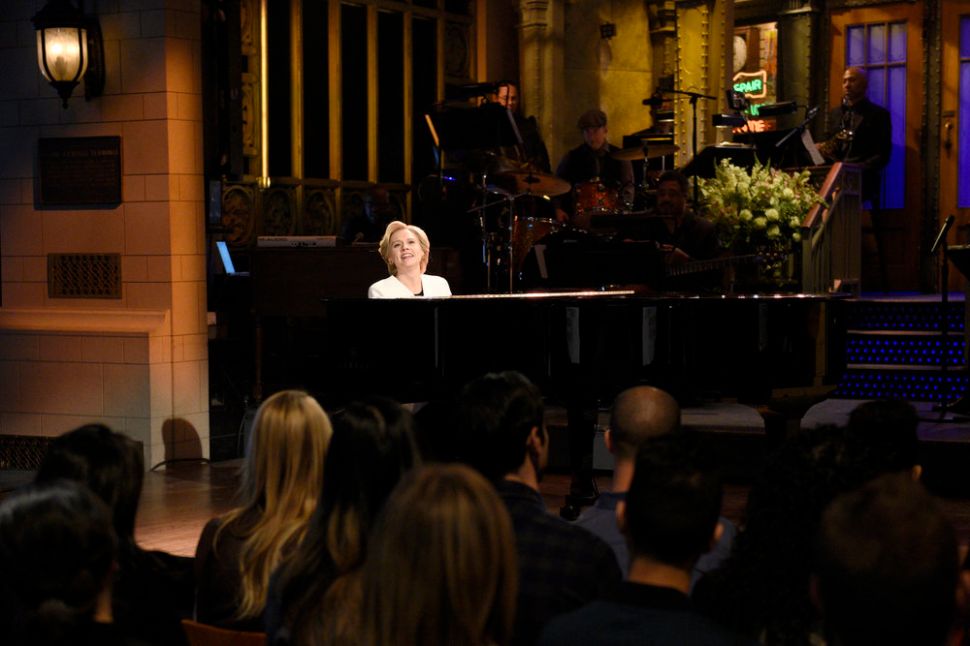