How are we supposed to explain this to our kids: In a few weeks, the leader of the free world will be the meanest of mean girls.

When a bully attacks with the savagery of a mixed martial arts fighter and then wins the most powerful office on the planet, our sense of decency and fairness is mutilated. Our 11-year-old daughter wept election night. Not surprising. Four years (that is if it’s only four years) of living under the rule of a mean girl might seem like a long time for us. For our daughter, it’s more than a third of her life.

Our daughter knows the score with mean girls. She’s coped with them. A mean girl leverages what she’s got—popularity, bloodlust and, in some cases, wealth—to cleverly rally co-conspirators and collaborators. The mean girl buys loyalty with the promise of power, and once she has assembled an army of supporters, she can force people into line or gleefully threaten to do them harm.

Many of us non-Trump voters now feel like victims—underdogs, isolated, helpless, hopeless, anxious and angry, afraid for tomorrow. Our political power seems to have shrunken to the size of a confetti flake never deployed from the rafters of the glass ceiling at the Jacob Javits Convention Center on election night.

So, now that the mean girl is heading for the White House, and we’re heading for…we don’t know where—who can we turn to show us a way forward?

Actually, we learned an amazing lesson about how to handle mean girls from 16-year-old Natalie Hampton.

When Natalie was not much older than our daughter, mean girls brutally bullied her at her middle school. Besides being taunted and cyber-bullied, she was shoved into lockers, threatened with scissors and coldly informed that she’d be “killed.” It got so bad that Natalie suffered constant panic attacks and landed in the hospital with stress-related ailments. Although Natalie and her parents begged the school authorities to intervene, no one did anything to reign in the bullies. Like any bullied victim, or political underdog, Natalie felt isolated, helpless, hopeless, anxious and angry, afraid for tomorrow.

Instead of putting the past behind her, Natalie didn’t let go of what it felt like to be the underdog. She wanted to change the system, “so others wouldn’t have to go through what I went through,” she says.

But what were the chances of stopping powerful people from doing bad things? People who feel powerless typically react to bullying with fear, anger and hatred. But if you’re an underdog who wants change, you don’t have the luxury of reacting with fear, anger and hatred, which rarely beat the mean girl. In fact, the mean girl feeds on your fear. When you attack a mean girl in blind anger, she and her supporters will gleefully take the opportunity to crush you.

But what about Natalie? She may have felt fear, anger and hatred, but like anyone who’s successfully challenged power—take your pick—Mahatma Gandhi, Martin Luther King Jr., Solidarity leader Lech Walesa—instead of blindly reacting, she knew that she’d have to channel her emotion into a radically creative solution.

How did she go about it? First, she understood school power dynamics. There were the mean girls and bullies who have the power; the underdogs and victims who have no power; and the well-intentioned people in the middle, who don’t like seeing people mistreated but out of fear do nothing. Natalie knew there was no way to out-mean the mean girls, or to organize the isolated underdogs. Instead, she targeted the well-intentioned people in the middle. If she could win them over, maybe she had a chance to change the power dynamic?

Natalie’s solution plays out in the political jungle of the school lunchroom where so many underdogs are left to eat alone in shame. With the help of a coder friend and cool graphics she designed herself, Natalie built a free social media app Sit With Us that enabled well-intentioned kids, who previously did nothing, to easily take the initiative and invite underdogs—the scared, isolated and lonely kids—to sit at their tables.

Sit With Us is revolutionary, a way for shy or ostracized kids to finally feel welcomed and accepted. It’s also a way for the well-intentioned students to feel good about themselves and to take on a responsible leadership role by reaching out to those could use their help.

Natalie imagined that her idea might spread to a few local schools, but “The crazy thing is,” she recalls, “it’s really taken off.” Natalie’s technology is helping to foment something brand new—and long needed—a natural alliance between underdogs and the well-intentioned middle. In the space of two months, Sit With Us has gone viral with tens of thousands of downloads in nearly half a dozen countries, from both kids in schools and adults in work cafeterias.

Which brings us back to the mean girl. Most of our battles are won by whoever can harness the power of the well-intentioned people in the middle. Let’s not forget this: Although the Trump campaign attracted some neo-Nazis and other unsavory racists, many more well intentioned people turned to him because they, too, felt bullied by life. When their jobs disappeared, their standard of living dropped and they felt mocked by the elites for their customs and beliefs (including NASCAR and gun ownership)—just like Natalie, no one was there to stand up for them. Feeling isolated, helpless, hopeless, anxious and angry, and afraid for tomorrow, they turned to a convenient mean girl, the demagogue-elect.

We hope our kid, and the rest of the kids today, won’t react to the mean girls of the world with fear anger and hatred or, worse, by seeking out a demagogue. Instead, we hope they gain the wisdom of Natalie and find ways to make a better world, by building alliances with anyone who feels like an underdog and the well-intentioned with radically creative solutions yet to be invented. 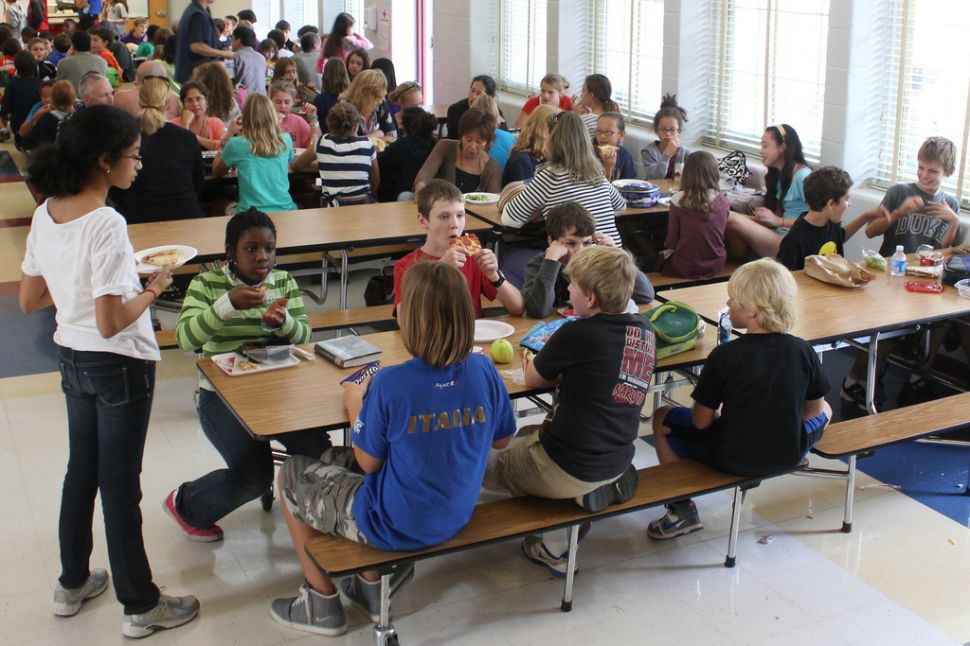