The afternoon I meet Trevor Noah in The Daily Show’s 52nd Street headquarters, storm clouds opened up over Manhattan. But the 32-year-old host had far more on his mind than rain; just a day before our interview—hours, really—Donald Trump was named president-elect. Outside the room, Noah’s staff busily prepared to explain how the politically impossible became reality, but inside his corner office, Noah was quiet, pensive. “Today started the way any day starts after a night you went a little bit crazy,” Noah—who also has a memoir, Born a Crime, out this week—told me. “You wake up and the first question you ask yourself is, ‘Was that real? Or was that all a dream?'”

As someone who analyzes and discusses news constantly…how the hell did Trump win? People will be analyzing this election forever. We cannot deny there are elements of racism that have inspired people to make the decision they made. We cannot deny that there are elements of misogyny at play. But we would be doing ourselves, and many voters, a disservice to not talk about how they feel as a shrinking middle class. How they feel about globalization. Immigration. ISIS. Hell, even taxes.

Can you tell me about the Live Election Night special? How did the mood change in the studio as the night went on?  I had a feeling, even the the night before, because I’ve always been worried about how good Trump is at getting people motivated, and unfortunately how bad Hillary was at being the stump speech person. And that’s why the day before the election I just took a moment to say to people “Hey man, don’t take this for granted. Get out there and vote. If you lose, you lose, but at least get out there and vote.”

“I try and press the reset button all the time in my head with Donald Trump…But then you go, ‘So is he just going to not do anything he said he was going to do?'”

Which is huge, looking back at the numbers now.  With those people, I ask “what did you hope to achieve? Did your vote get you closer to achieving that?” I think a lot of people, if they were being honest with themselves, would answer no. So as the day went on, I was cautiously optimistic, then not comfortable at all, and then all at once it was a feeling of, “Oh wow, this is going to Trump.” It doesn’t even sink in while it’s happening.

And then, for me, it’s the flashback of every moment. Because I try and press the reset button all the time in my head with Donald Trump. Like “Okay, okay, give the guy the benefit of the doubt.” But then you go, “So is he just going to not do anything he said he was going to do?” It’s one thing if he was a one-policy, one-issue candidate. But he’s Mr. Build a Wall, Mr. Ban All Muslims, Mr. Stop and Frisk Black People, Mr. Lock Hillary Up, Mr. Keep Guantanamo Open, Mr. Repeal Obamacare, Mr. Destroy the Iran Nuclear Deal, Mr. Paris Climate Change. That’s a lot of things where you go “Wow, okay, if he does half of twhat he says he’s going to do, we might be in a lot of trouble.”

When you first came onboard The Daily Show, how seriously were you and the writers room taking Trump? The first thing I said to the writing room was, “This guy, I think he can win.” I remember everyone laughed and I understand why. They were like “No man, this is what Americans do. Silly Summer, we go crazy with a candidate, we did it with Herman Cain and Sarah Palin, this is what we do.”

Initially, we enjoyed the madness of Donald Trump. It’s not like we didn’t call out the fact that Republicans weren’t going after him. They really gave him an easy path through the tournament bracket of their March Madness. And then over time, he became more dangerous in his rhetoric. Yes, he started with “Mexicans are rapists,” but if anything that’s a belief that is extremely flawed, but it’s just a belief. When he started laying down plans, and plans that were actually tenable, he became dangerous.

“If you look at the feeling that was contained within the millennial group, through Bernie Sanders, I don’t want to be someone that allows people to forget the passion that got them to the place they were in.”

Has there been in a chance yet in the writers room to strategize covering President Trump? I think for now you have to exist in the moment. If anything I feel in myself, more than ever, this is the beginning of my story, of my journey. Now the work starts. If there’s one obligation I feel I have to myself, it’s that I have a lot of millennial viewers and young people who watch the show. If you look at the feeling that was contained within the millennial group, through Bernie Sanders, I don’t want to be someone that allows people to forget the passion that got them to the place they were in. This is when you start the ground game for another election. This is when you start the ground game for changing the world and your life. You don’t do it when there’s eight months until an election.

What role do you think The Daily Show serves now? It depends on what kind of president Donald Trump is. Because who knows? I mean, he’s been a great president-elect so far.

He’s basically 1-0. Exactly, one day, pretty good. World’s still here. No crazy Tweets. We’re in a good place. We don’t trust him with a Twitter but we’ll give him the nuclear codes, whatever. But it depends on what Donald Trump does. Does Donald Trump become the great unifier that he says he will be? I hope so. I would rather have a show that’s horrible and boring and have America be in a better place, than to have a show with an embarrassment of riches to work from but be in a space where we’re all suffering through it.

In Born a Crime, you write, “In society, we do horrible things to one another because we don’t see the person it affects.” How is that mindset affecting you today? It affects me all the time. It’s why I try my utmost to understand why someone would vote for Donald Trump. I try and remove every single prejudice I have, because I know I possess them. I try to put myself in the mind of a person and go, “Why would you vote for Donald Trump?” I work through it, and I see why you might not like Hillary Clinton, why you don’t like what the Clintons represent, why you don’t like the establishment, why you don’t like Washington. We make the mistake now of saying the Republicans won. But the truth is, they didn’t. Donald Trump beat the Republicans and the Democrats.

The last chapter of the book is the most you’ve spoken about your mother’s near murder at the hands of your stepfather. Why was it important for you to tell that story? Partly to show people that I’ve not lived a perfect life. A lot of people see me from the outside, they say, “This guy just walked into The Daily Show.” No one knows anything about me, and I get that. We don’t have time to know people these days. We want to check their social media and then hire them or fire them. I think for the most part that final story is a story of triumph. It’s a happy ending. It’s a painful ending but a happy ending. I hope people will take away that happiness is not achieved with you always coming out unscathed. It’s not a fairy tale happy ending. You can walk away happily—probably won’t be ever after—and you will have some scars. But it’s how you choose to move forward that will determine how your life is lived. 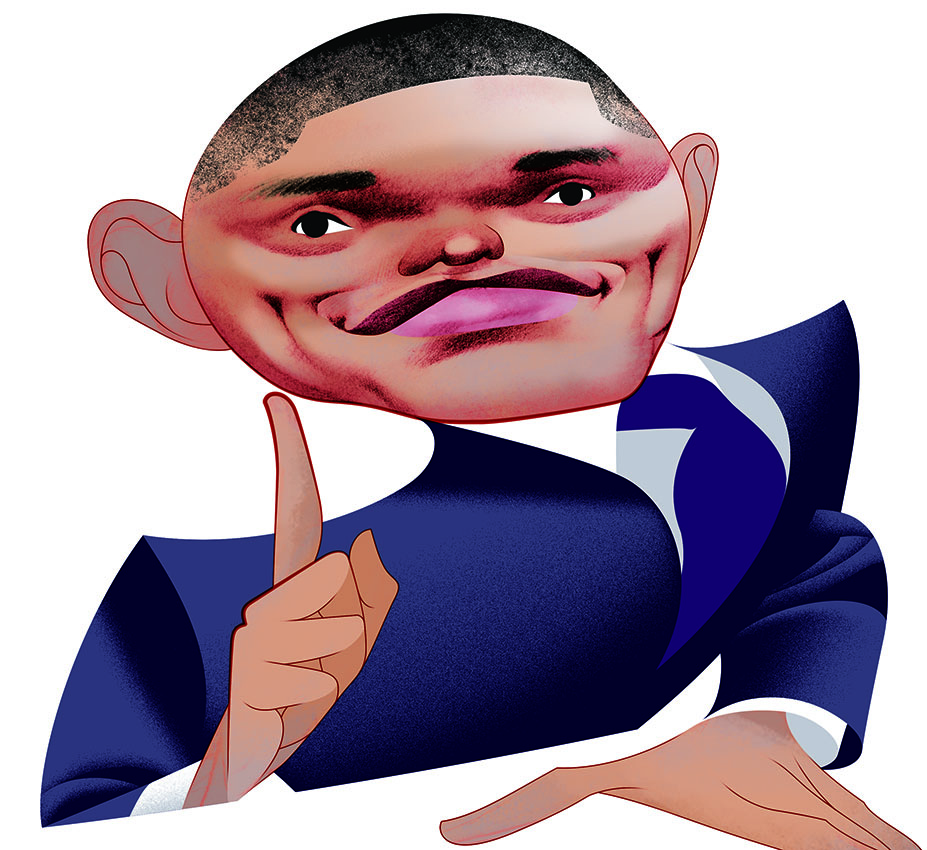