Call it the bonfire of the certainties.

America’s super rich, including many of the people on the Observer’s annual Rich List, spent the last year holding their breath, wealth management experts say, delaying major decisions until after the presidential election. But if they were expecting its result to bring any kind of certitude about the future, they were as wrong as most every political “expert” in the country.

The shock that Donald J. Trump would be moving from Fifth Avenue to Pennsylvania Avenue briefly sent global markets into a loop.

Dow futures on the morning the election results became clear immediately plunged 750 points, before the market recovered to end the day at a near-record high.

The NYPD, meanwhile, installed a wall of sand-filled city dump trucks outside Trump Tower, the president-elect’s current redoubt, as a precaution against the several thousand angry protestors who converged around dusk.

“It’s been a year of mayhem,” said Barry Ritholtz, chairman of Ritholtz Wealth Management. “The election really pushed everything else out of the way.”

The election of America’s first billionaire president caps a remarkable year for so-called Ultra High Net Worth Individuals (UHNWIs), defined as those with at least $30 million in investable assets. Their global numbers grew by 5,200, or 3.1 percent, according to the most recent figures released by WealthInsight, an analytics firm.

This was despite some institutions predicting another downturn in the near future: In July, UBS pegged the odds of a coming recession at 34 percent, up from 23 percent in 2015. JPMorgan Chase concurred, estimating the risk at 37 percent.

“But this was a year that seemed to surprise people with its economic strength,” said Ritholtz. “The economy is resilient, and despite a pretty steady drumbeat of negativity, it keeps doing really well.”

Ultra High Net Worth Individuals could reasonably look forward to “a Trump tax-cut windfall,” in both individual and corporate contributions—Barry Ritholtz, chairman of Ritholtz Wealth Management

According to the most recent World Wealth Report, published in October by the consultancy, Capgemini, 2016 was also a good year for merely HNWIs—those with $1 million on hand to invest.

“North America’s HNWI population grew by 2 percent to 4.8 million and their wealth by 2.3 percent to US$16.6 trillion,” its authors reported.

The year was not without its headwinds, of course. Britain’s surprise vote in June to exit the European Union—or “Brexit”—briefly rattled financial markets, depressing the pound and sowing still-unclear long-term consequences.

In New York City, one group complaining of a slowdown were Midtown ultra-luxury developers. Along the West 57th Street corridor known as “Billionaires’ Row,” the last four years had seen a building boom in residential towers, with many new apartments offered between $50 million and 100 million.

But the combination of oversupply and a dwindling stream of foreign investors brought sales of such residences “to a complete halt,” the elite broker, Dolly Lenz, told The New York Times in July.

A growth trend in UHNWI-spending this year has been the acquisition of “experiences,” in addition to the usual baubles from Cartier or Ferrari, said Doug Gollan, editor of DG Amazing Experiences, a weekly e-newsletter for private jet owners. Gollan cited ice-driving on frozen lakes in Finland, booking African safaris and even luxury private trains as popular travel experiences for the personal-jet–set.

But another new trend is for UHNWIs to reserve an entire, smaller five-star resort, so they can vacation with their extended family in privacy.

“Up to about 50 rooms, all the resorts offer buyouts,” he said.

He added that the wife of one New York billionaire—an avid hunter, who was celebrating a landmark birthday—booked the entire cast of Duck Dynasty and redecorated their West Monroe, La., headquarters especially for a surprise party. (The birthday boy had thought his jet was on its way to New Orleans, until it was diverted for the reveal.)

As for the year ahead, Ritholtz described Trump’s victory as “the proverbial good news and bad news.”

“The bad news is we really have no idea what sort of policies a Trump Administration will enact,” he said.

But on the plus side, UHNWIs could reasonably look forward to “a Trump tax-cut windfall,” in both individual and corporate contributions.

Edward N. Wolff, a New York University economics professor who has studied wealth and its effects for decades, predicted: “Donald Trump is very likely to eliminate the estate tax—or the ‘death tax,’ as he likes to call it. This will be a huge boon to the very wealthy since today only the top 1 percent of wealth-holders pay any estate tax.”

But the prospect of a policy prevented by split government won’t pay dividends, warned Wolff, only further aggravating “overall wealth inequality in this country and lower wealth mobility between generations.” 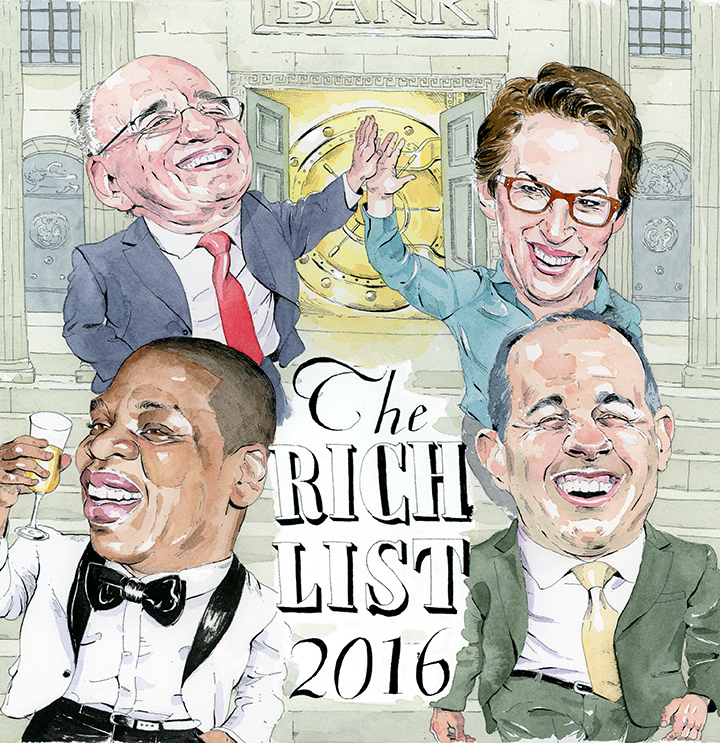