In 1992, a study of sound bite lengths took political science and the media by storm. Analysts discovered that candidate soundbites were drastically shrinking over twenty years. Is that still the case? And have politicians like Donald Trump found a way to outfox media’s coverage of candidates?

Daniel C. Hallin and his colleagues at the University of California discovered that the average television sound bite shortened in length from 43 seconds in 1968 to nine seconds in 1988, in a Journal of Communication article. “If you couldn’t say it in less than 10 seconds, it wasn’t heard because it wasn’t aired,” complained Michael Dukakis, the losing presidential candidate in 1988, according to Craig Fehrman in a 2011 Boston Globe article titled “The Incredible Shrinking Sound Bite.”

Stung by such criticism, CBS vowed to make 30 second sound bites early in the 1992 campaign, according to National Public Radio. But after initially positive reviews, the network, like so many others, squeezed the words of politicians down to less than 10 seconds by Election Day.

There are historical precedents. An analysis by David M. Ryfe and Markus Kemmelmeier of the University of Nevada in Journalism Studies found that newspaper quotations shrank in size by nearly 50 percent from the 1892 election to the 1916 election. No doubt, the rest was saved for the media to shape the campaign coverage, an incredible power of the press.

In a world where the press still focuses on itself rather than the politicians they are supposed to cover, Trump’s tweets seem to be the only thing breaking through the broadcasting barrier to candidates.

The Boston Globe’s Fehrman noted that this was the result of newspapers shifting from partisan organizations to commercial enterprises. He wrote: “Since newspapers now felt less tied to political parties, they could take candidates’ words and combine them with context and analysis.” He adds that from 1968 to 1988, thanks to the blowback from Vietnam and Watergate, there was more “active journalism.”  Exposes and criticism gained precedence over video clips of a politician’s words.

In other words, the news would be more about the writers, rather than the subjects they wrote about. Politicians would be given the smallest possible window to communicate with the public, if at all. Nothing could get through this “full court press” of media control of election coverage. 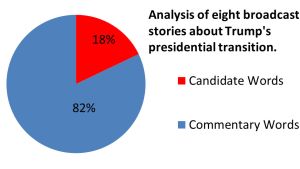 To test whether this is still the case, my students and I analyzed eight different news stories about Donald Trump and the post-election transition broadcast on Fox, CNN, CBS, NBC, ABC, MSNBC, CNBC, and even the BBC. The average length of the studied story was a little more than five minutes (310.875 seconds).  The average soundbite was 55.625 seconds (largely inflated by one MSNBC story loaded with Trump quotes and tweets). Excluding the MSNBC case, that’s still 30 seconds worth of soundbites.

This may sound like politicians are getting more coverage. But their words still make up less than 20 percent of the entire story. The media dominates the rest of the coverage.

My students observed that in many cases, broadcast journalists read aloud Donald Trump’s tweets. The Republican President has been frequently mocked for the use of his Twitter account; in fact, a Huffington Post story questioned whether there was a method to his madness, or if it was simply madness. But through the use of Twitter, Trump may have found a way to beat the media at their own game, changing campaign coverage forever.

Compare Trump to Dukakis. The Democrat nominee gave lengthy speeches, with no control over how much of the speech, or what lines would be used. That broadcasters decided. In the end, Dukakis received 10 seconds of unplanned clips in his 1988 campaign, with the rest of the story devoted to opinions and analysis of Dukakis. But Trump, with his tweets (taking ten seconds to read), fit neatly into the limited space for politician words that the media allowed. The Republican delivered a spate of controversial statements, assured of getting prime coverage.  And even when he received a negative reaction, Trump’s words were guaranteed to be the most memorable ones, far more interesting than the reaction from long-winded reporters.

In a world where the press still focuses on itself rather than the politicians they are supposed to cover, Trump’s tweets seem to be the only thing breaking through the broadcasting barrier to candidates. It may have won him more than just an election. This new social media technique may be the game-changer for a generation of future candidates. The media may shrink politician soundbites, but tweets trump the media coverage.

John A. Tures is a professor of political science at LaGrange College in LaGrange, Ga.  He thanks Henry Harrison, Wesley Hermonstine, Katelynn Dixon, Breckin McCoy, John Williamson, Salman Rahim, Ronald Jean-Pierre and Jordan Osborne. He can be reached at jtures@lagrange.edu.