Over the past decade, China has become increasingly bold, doing everything it can to act the neighborhood bully. Narcissistic, entitled and unwilling to bear any criticism, China seems to believe it can walk over almost anyone—mostly because no one has given them any reason to think otherwise. Nations have refrained from criticizing China too strongly, or taking any kind of action, because they rely on the trade that has increased so massively from a country of over one billion people. Such reliance, however, is like continually spending on a credit card, ignoring the fact that one day the bill is going to be due.

In China’s case, we can see this with their heavy extraction of concessions from anyone with whom they deal. It began with the Dalai Lama, and the fact that the Chinese strongly caution any national leader who dare meet with him or even speak to him. It was always put across as a matter of respect for China’s internal sovereignty and basically not rocking the boat. Is one man really so powerful that the CCP needs to protest people meeting with him?

This summer, when Australian swimmer Mack Horton called one of the Chinese swimmers a drug cheat, the response from the state-run Global Times was nothing short of hysterical. They demanded an apology and referred to Australia as being “at the fringes of civilization” and that “no one should be surprised at the uncivilized acts emanating from the country.” Quite a fit to throw over something an athlete said.

Allowing of China into the World Trade Organization (WTO) was a classic case of putting short-term gains ahead of longer term prosperity. The Chinese have shown that they have next to no respect for the concept of intellectual property rights, AKA the cornerstone of modern business. Cheap knock-offs of everything from designer fashion brands to ambulance stretchers continue to flood the West, with no sign of slowing down.

Then there is the cyber army that is paid to steal from Western business, government, military contractors and anyone deemed to have even the most slightly useful information. Other bad behaviors include the fact that China continues to undervalue its currency; that it protects its own companies while putting foreign firms at a competitive disadvantage, and that they are slow to implement WTO rules, while suddenly imposing unwritten laws that are unfavorable to foreigners.

And now we have China bullying anyone and everyone in the South China Sea, where they built a number of artificial islands with airstrips for military aircraft. China refutes the international regulations ruling that the islands belong to Japan, just as they refused the recent ruling of the International Court of Arbitration ruling that the “ten dash line,” whereby China claims the entirety of the South China Sea as their territory, is illegal.

Any ruling against China is seen by them as losing face, which poses the obvious problem for the West: How do you deal with a country that will disregard the international laws by which everyone else abides?

No one has yet stood up to China on this issue, because many of the disputed islands have been deemed too small and insignificant to start a major diplomatic row, or even a minor scuffle over. Yet the lack of action by both China’s neighbors and by the West has allowed China to become increasingly bold in their actions. We are now at the point where anything short of military action—and a hard line against China’s encroachment on the area—is going to continue to cost everyone dearly in the future.

There is little doubt that this has all been well-planned by the CCP. The fact that their government is stable and doesn’t have to worry about pesky things like democracy and elections means they can, and most likely do, plan 20 years into the future. Their shortest-term plan is five years, and that’s just what they broadcast to the rest of the world. In contrast, the longest plan most other countries have is an election cycle, and the plan there is to win the next election, rather than to look too deeply into the future. This lack of foresight is going to cause major problems in the next two decades as governments around the world discover too late that, while they have been caught up in the 24 hour news cycle and keeping China onside for trade, that the Chinese have been slowly and methodically working toward their plan of total domination of the region.

At such a point, there will be very little that can stop them beyond outright war. By then, however, it will again be too late, because the Chinese military will have caught up enough in a technological sense to do what it wants in the region. It’s doubtful they’ll have the capability to project power in the same manner as the United States—but they won’t need to. They will have the home court advantage, and more than enough in their arsenal to impose their will on neighboring countries, and the South China Sea. This is going to be an enormous problem when we consider that five trillion dollars worth of goods passes through this region each year.

The world has one of two choices: it can continue to appease China every time they overstep their bounds and make inconsequential diplomatic protests and complaints, or the world can show China that their actions are unacceptable and that there will be consequences. This is a choice that needs to be made sooner rather than later, because before we know it, there will only be one choice. It’s time the world opens its credit card statement and pays the bill, because if we continue to appease China for short-term gain, we’re going to open the statement one day and realize we can’t afford it. 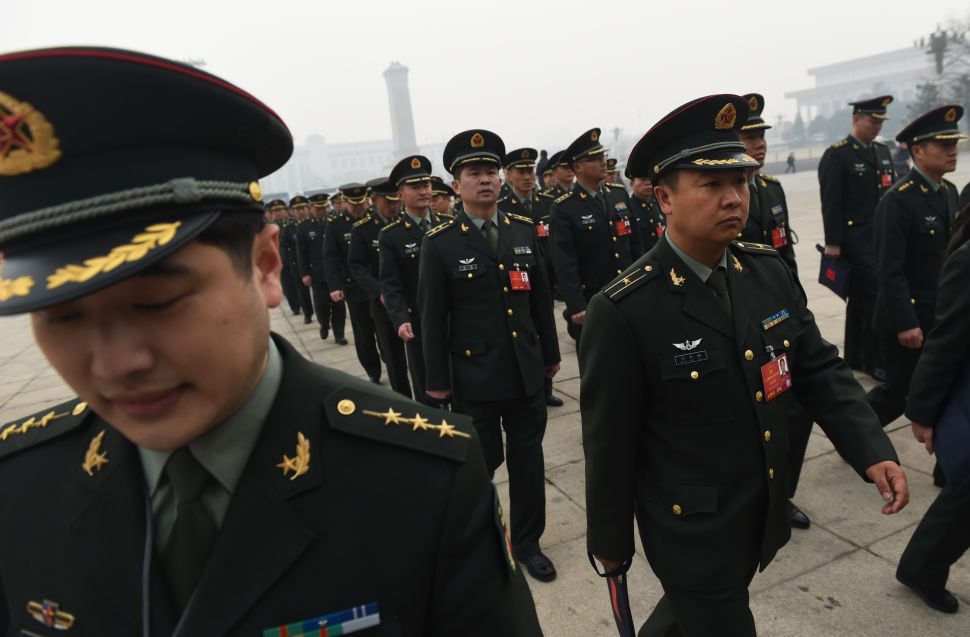