Almost 8,500 people have flocked to hospitals and flooded emergency phone lines in Melbourne, Australia over the past week, exhibiting symptoms of thunderstorm asthma. This allergy-like phenomenon, in which raindrops break pollen grains into tiny fragments which are small enough to land in a person’s nose or lungs, has already killed eight Australians—London and Atlanta have also experienced outbreaks in recent years.

Dr. Stefanie Sarnat, an assistant professor of environmental health at Emory University’s Rollins School for Public Health who studied the Atlanta outbreak, told the Observer that areas with high humidity are most susceptible to thunderstorm asthma. The mix of wind, lightning and large, fast-moving raindrops with pollen, fungal spores and grass seeds (which traveled almost 1o million acres in the Melbourne case) leads to adverse health effects when the wet particles blow into the lungs.

Thunderstorm asthma most often occurs in urban environments—indeed, this is Melbourne’s third outbreak (the others were in 1987 and 1989).

According to Dr. Sarnat, there is a small general increase (about three percent) in emergency room visits for asthma after every thunderstorm, because asthma sufferers’ symptoms are inflamed.

However, large scale outbreaks such as the one in Melbourne only occur when “conditions are ripe,” Sarnat said. These ripe conditions include compromised air quality (such as increased pollen) and a population that is susceptible to asthma symptoms.

“This certainly has been seen before, but not often at this magnitude,” Sarnat said.

Indeed, some thunderstorm asthma events are so severe that even people who don’t have asthma can get sick—pollen spreads so quickly during storms that anyone who’s exposed can be adversely affected.

“The concentration of particles in the air is so high that it’s not good for anybody,” Sarnat said.

Some scientists have dismissed thunderstorm asthma as a “sexy theory” with little scientific backing, but Sarnat said her research showed people should still be wary. People with asthma can lower their risk by having their rescue inhaler nearby at all times, though even those without asthma shouldn’t try storm chasing.

“Thunderstorms themselves aren’t directly preventable, but limit your exposure by staying inside,” Sarnat said. 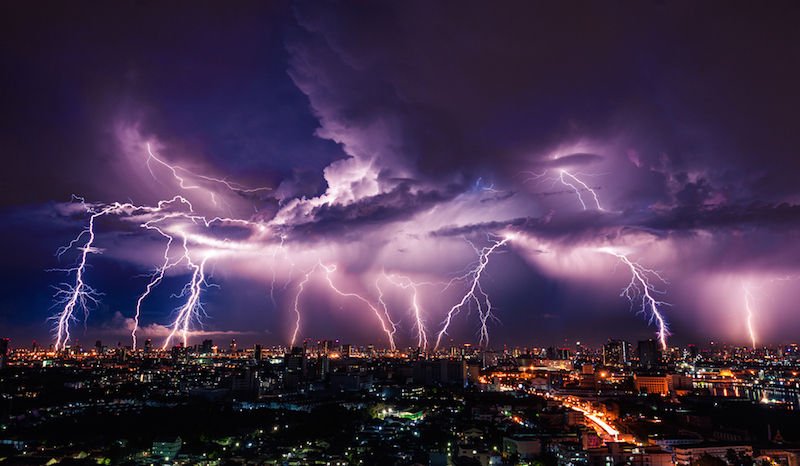