Less than a century ago, many of our great-great-grandparents worked in specialized jobs which required near-constant movement. Common occupations, such as farming and construction, were extremely physical and labor-intensive. Today, that has all changed. Most people work in an office or home environment, where they spend the majority of the day sitting. Whether they’re answering calls, typing proposals, or texting friends about going to happy hour after work (and sitting some more), and then commuting back home (more sitting), after all is said and done, that’s a lot of staying still. Even social outings have shifted from physical activities—like dancing on weekend nights—to sitting in bars or at home, watching Netflix, munching on leftover Halloween candy.

Sedentary activities (from the Latin sedere, which means “to sit”), are those which require a minimal energy expenditure, usually when we are seated (playing computer or video games, for example). As our lifestyles have become more sedentary and our waistlines increasingly larger, many people have turned to vigorous physical activity like a daily exercise class, thinking they can simply cram in 45 minutes of calorie-burning activity and trade it in for great health, like tokens at an arcade.

Regular exercise does provide some sweat-worthy incentives to keep moving. According to the Centers for Disease Control and Prevention, the benefits of physical activity include weight control; a reduction in the risk for cardiovascular disease, type two diabetes, metabolic syndrome, and some cancers; bone and muscle strengthening; improvements in mental health and mood, and an increased lifespan. All of those are inspiring reasons to hit the gym or local park several times a week. However, even if you workout on a daily basis, it looks as though you can’t “outrun” a sedentary lifestyle.

According to a study by the Cancer Prevention Research Centre, the “Active Couch Potato” phenomenon proves that the metabolic consequences of prolonged sitting are adverse, even among those considered to be sufficiently physically active. In other words, even if you engage in the recommended daily and weekly levels of  physical activity, if you spend a lot of time sitting, you could still increase your risk for chronic diseases (and possibly a shortened lifespan).

Shockingly, the same study goes on to report that “each one hour increment in [sitting] time was found to be associated with an 11% and an 18% increased risk of all-cause and cardiovascular disease mortality, respectively. Furthermore, relative to those [sitting] (< 2 hours/day), there was a 46 % increased risk of all-cause and an 80% increased risk of cardiovascular disease mortality in those [sitting] four or more hours of TV per day, independent of traditional risk factors such as smoking, blood pressure, cholesterol and diet, as well as leisure-time physical activity and waist circumference.” These statistics are alarming, but there are measures you can take within your office life, as well as your home life, to ensure your sedentary time spent earning a living doesn’t prevent you from living a long life.

Over the past few years, more and more corporations have invested in hiring ergonomists, either as staff or as contractors, to ensure that workplace systems and equipment are safe. Many companies have subsequently begun offering standing desks, or sit-to-stand desks. Standing requires a constant contraction of the postural muscles, in order to keep the torso and body upright, unlike sitting, where we slouch against furniture like gobs of goo. Alternating between sitting and standing thus allows individuals to move more independently throughout the day, shifting from one position to another, and using the body (and supporting muscles) more. Even better are options where you can actually move, like treadmill desks, or yoga tailored to those with desk occupations. Think of regular standing as a first step, and regular movement as an ultimate goal.

If you work in an office, or perhaps own your own business, and hiring an ergonomist or buying elaborate desks is not within budget, there are other ways you can ensure your body is able to expend more energy, and stay engaged, throughout the day. Rather than having meetings at a desk, try conducting walking meetings (bonus points for taking these strolls outdoors, where you can also catch up on some of the vitamin D most westerners are lacking). If you sit during the day, set an alarm on your phone or computer to move around every 30 to 45 minutes, perhaps to get a cup of green tea, or walk to the printer on the next floor to grab your spreadsheet.

Regardless of your working conditions, also be aware of how you spend your downtime. On weekends, for example, if you know you’ll be sitting for a few hours at brunch, perhaps opt for an afternoon hike or local yoga class afterward, instead of camping out in front of the television. If you’re a sports fanatic and want to watch the game, take advantage of commercials to get up and walk around (without making a beeline toward the beer and pretzels). These changes might seem minimal, but they add up and can ensure that the hard work you’ve done exercising isn’t erased.

Chelsea Vincent has been teaching fitness for almost ten years. Prior to teaching, she had 15 years of formal dance training. 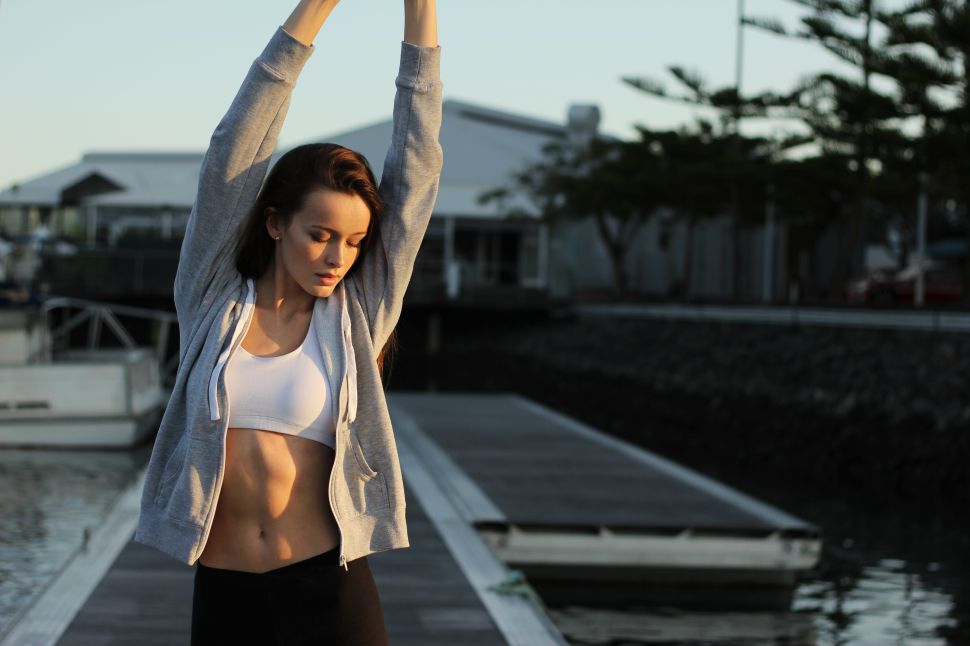