After making more than 100 appearances on The Tonight Show and various other comedy/variety series, Ali Wentworth knew exactly the story she wanted to tell.

“I feel like when a celebrity, athlete or politician goes on stage they have their ‘talking voice’ and are promoting whatever their promoting. To me, the real story is all the stuff that goes on behind the scenes before the audience sees them. I really wanted to do a show where you don’t see the host or the stage but you see all these crazy people trying to put a show on every night.”

Born of this idea comes Wentworth’s newest endeavor, Nightcap. The 10 episode series offers a glimpse into the world of late night television. Each installment follows the production team of the fictitious talker, The Nightcap With Jimmy, in the frantic minutes leading up to the show’s live premiere.

Wentworth portrays Staci, the high-strung neurotic celebrity booker on the show, a women who’ll go to great lengths to make sure her boss, the unseen, and clearly self-absorbed, host, Jimmy, has a great show.

Wentworth’s own spouse, political journalist and Good Morning America host George Stephanopoulos, makes an appearance as well. Wentworth admits that of all of those stars, Stephanopoulos was actually the hardest one to work with, “He only gave me about 45 minutes of his time!” laughs Wentworth.

Aside from producing, writing and starring in Nightcap, Wentworth was, in fact, her own booker on the series, securing most of this season’s guest stars. “Yeah, I pretty much did that job this season because a lot of these people are actually my friends in real life. I said, ‘Hi, I have a really funny show and you’ll be playing a heightened version of yourself and it’s not a long shoot and it’s a fun set.’ I promised they’d have a good time. The only thing is, it was kind of stressful because I don’t like to ask favors of people.“

The huge task of overseeing all aspects of this series, is just the role Wentworth wants. “I’m so happy. I love every second of this. This is my idea, my baby, so I kind of need control of everything right down to craft services. I don’t want shitty cookies on set, I want homemade cookies. I’ll make them if I need to.”

For her core cast, Wentworth employed some traditional casting methods and some ‘unique’ tactics, “Well, we did regular casting sessions, but Malik—the bitchy publicist—she was my babysitter. She is a trained actress, and I knew she’d be great so I cast her, but now I don’t have a babysitter anymore! Jacob, who plays Randy our sound guy, was Mariska [Hargitay’s] chef. I took him from her.”

Wentworth details a bit about the writing process of Nightcap, saying, “There are a few ways that we’d go about it. Sometimes we came up with the storyline and then would fit the celebrities into that storyline or sometimes we knew the celebrity pretty well and would tailor the episode specifically to them. And, everything was scripted out, but after we shot the scripted versions we’d play a little bit and do some improv. Some of that did make it into the show because it was just so funny.”

While the majority of the scripts were ready to go before production started on each episode, Wentworth admits that often changes were made on the fly to beef up the comedy. As an example of this, she points to the episode with Gwyneth Paltrow. “The night before she came, I felt like, ‘it’s Gwyneth Paltrow, and people are always attacking for her Goop thing so for this to really be funny she has to get in there and make fun of Goop and herself.’ So we rewrote that script the really quickly the night before we were going to start shooting it and she loved it. I’m really glad we did. It’s one of my favorite episodes for that reason.”

True to the premise of the series, the things that go on backstage at The Nightcap With Jimmy, get pretty crazy and to make this work Wentworth clearly asked her guest stars to leap into the pool in the ridiculousness with her, sometimes a tricky maneuver. So did anyone balk at what they were asked to do? “Everyone did exactly what they were told,” she says with a laugh, and then plainly reveals, “Seriously, they all liked what we were doing. I think people think that celebrities are like, calculating, and stuff all the time, but the truth is, they like to have fun and be sort of nutty sometimes. Now I’ve provided a platform for them to do that!”

Wentworth admits that she’s willing to go all in for her craft, but that she personally draws the line at one thing—“I’m not going to get naked, because I’m sparing the audience. You’re welcome for that. I’ll do anything for a laugh, but not that. Other than that, if it’s funny, I’ll do it.”

Having already been renewed for a second season, Wentworth has begun eyeing her next set of guest stars. “My dream guests aren’t necessarily those people that are super famous. Like, one of my favorites from this year was Jason Biggs. He was hilarious as this jerk of a guy. That being said, I’ll contradict myself and say, I’d love to have Oprah on. I just think I could have fun with her. I worked on her show for a few years and I would know how to write something for her. I also want to open it up to have more athletes—like LeBron James and politicians as well. But the politicians are much more guarded so that might be hard. In summary, I’m looking at Oprah and LeBron. Yeah, those two.”

Calling out two acclaimed shows with a similar premise, Wentworth admits that she hopes Nightcap can build on series like The Larry Sanders Show and 30 Rock. “I’d love to be compared to those shows. That would be phenomenal because so many people loved them. Also, I think it is a dry area right now, we don’t have a show on about the late night world right now.”

Getting serious for just a moment, Wentworth sighs and says, “You know this has been a very tense year and it just seems like it’s really time to laugh and I think our show can really help with that. I know there’s a lot of product out there, but I don’t think there’s a lot of ‘slap your thigh’ comedies and we aspire to be that. We want you to seriously laugh you’re ass off.”

When asked to sum up Nightcap with just three words, Wentworth pauses for a moment, says, “Wait, wait…..I got it: ‘Emmy Winning Comedy.’ ” And with that she laughs at herself, which seems quite appropriate. 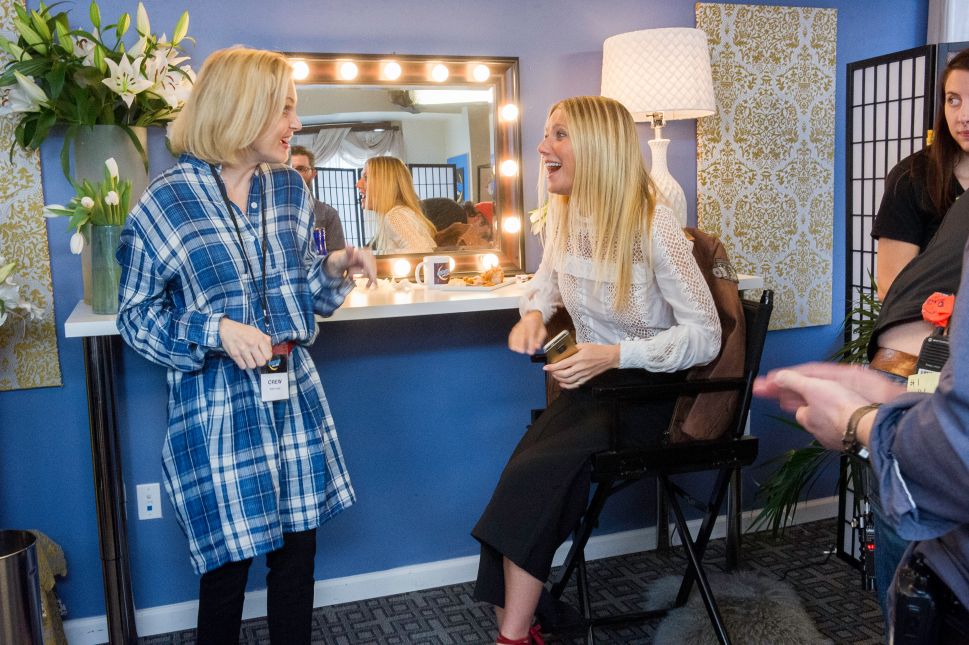