With Sweat, a powerful autopsy on the agony of the struggling and marginalized blue-collar workforce that is on its way out of the fabric of American life, joining the already vanishing middle class, Pulitzer Prize-winning playwright Lynn Nottage (Ruined) hits another nerve. That’s what she does. She holds the entrails of people and issues up to the light on a fork, examining the spoils of cultural and economic abuse close enough to draw blood. Never has she done so more effectively than in this disturbing play at the Public Theatre. It’s an evening of sobering, well-crafted food for thought.

It opens in 2008, when two former teenage friends, a young black man named Chris and a young white man named Jason—ex-cons who have recently been released from prison after serving time in stir for committing the same crime—are meeting with their parole officer. What did they do?  How did a pair of bright kids with hopeful futures turn out to be so virulent, violent and lost? Flashback to eight years earlier, and you experience a neighborhood on the decline. The setting is the industrial town of Reading, Pa., where postwar prosperity has slowly disintegrated into the panic of unemployment, the decline of unions, and the downsizing of the job market. People are diving from the high wire without a net, losing their homes and their jobs in shifting times. With a compassion that also plays out in scenes of great dramatic force, Nottage and director Kate Whoriskey take us on a guided tour of America’s disenfranchised, represented by a group of friends who work in a steel mill on the verge of ruin. They meet for cards and pizza after work, but the center of their lives is a saloon where they gather to argue, unload their problems and get loaded. They include Tracey (the wonderful Johanna Day), a blonde powder keg about to blow; Cynthia (Michelle Wilson) whose estranged husband Brucie (a fine, nuanced John Earl Jelks) has turned to alcohol and drug addition after losing his own job in a textile factory; Jessie (Miriam Shor), who spends most of her time in a drunken stupor; Tracey’s son Jason (Will Pullen) and Cynthia’s son Chris (Khris Davis). Presiding over this motley crew of regular customers is the cynical, gossip-dispensing bartender Stan (James Colby), who was an employee of the same plant for 28 years before he was crippled forever in a work-related injury. In the course of a troubled evening, we learn about what they endure in the sweat factory—the racial and sexual discrimination, the long hours and low pay, the deafening daily noise of the machinery and the absence of any feeling of job security.

As their dreams turn to disillusionment, Cynthia gets a promotion that guarantees more money and responsibility, while her friend Tracey grows apart, resenting her new access to management, which they used to regard as the enemy. Lines are drawn as the dangers and pitfalls faced by the economically strapped become a reality. When Cynthia tries to share her news of buyouts and layoffs, her friends turn on her. She thinks she’s protecting her cronies. They see it as betrayal. Helplessly, she watches while they all lose their jobs and get locked out with no help from their ineffectual unions, including her son Chris and Tracey’s son Jason, two electric wires, snapping and ready to ignite. As the play moves on, the stress and tension finally do detonate and we see at last what the two boys did to land in prison. In a 2008 postscript, when the characters sadly meet once again in the tavern, there is no resolution—just the grim reality that nothing could have been done differently and nothing has changed. Lives have been altered, feelings have been frayed forever, hope is still a challenge, and nobody gets an automatic happy ending because of good intentions. Nottage, who moved to Reading to soak up atmosphere and study her characters at close range, brings a sense of documentary-style reportage to the drama that is as true as a newsreel. By the time Sweat ends, I felt like I was trapped in the same overwhelming vortex of despair as each of the characters. In the presence of an exemplary ensemble and so much first-rate writing, I felt humbled, and I emerged crushed but enlightened and strangely stimulated. Sweat is a fine play indeed, not to be missed. 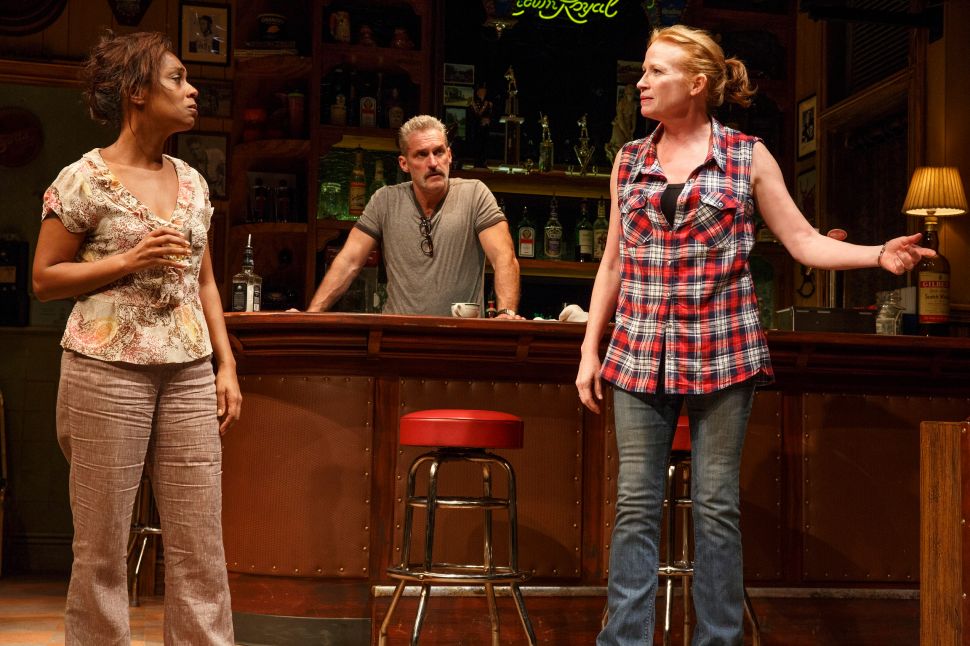