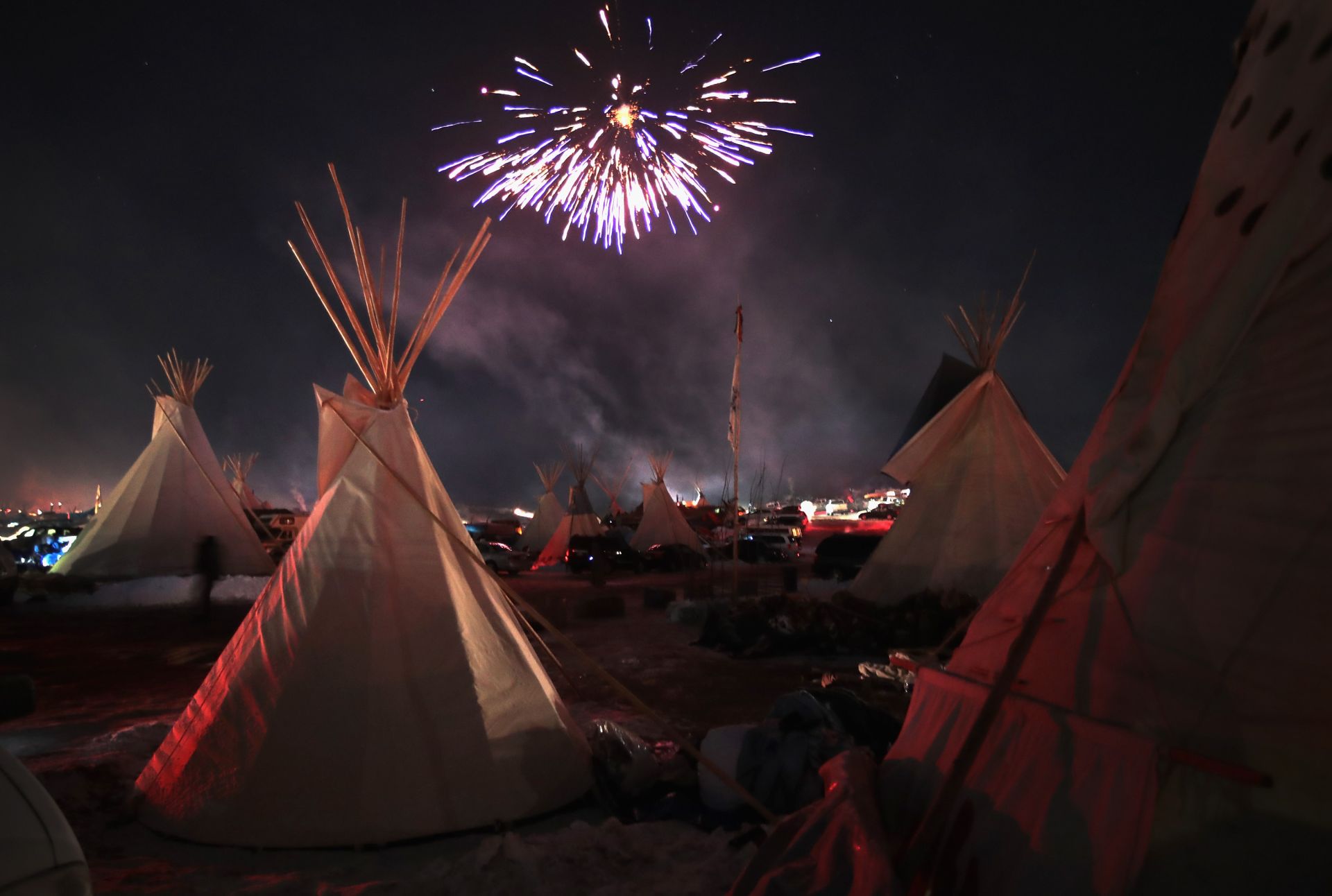 Fireworks fill the night sky above the Oceti Sakowin Camp as Native Americans and other protestors celebrate.
Scott Olson/Getty Images 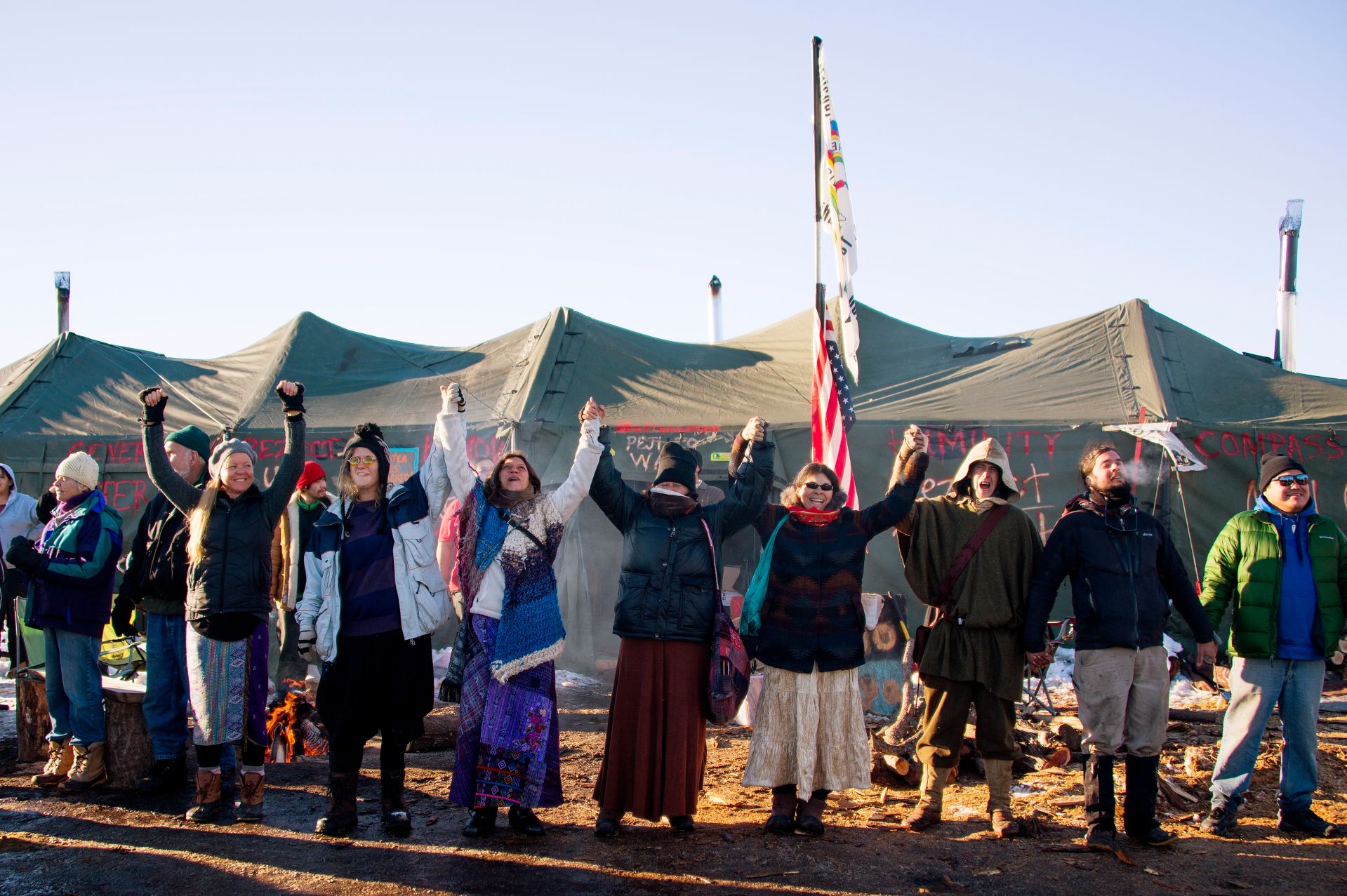 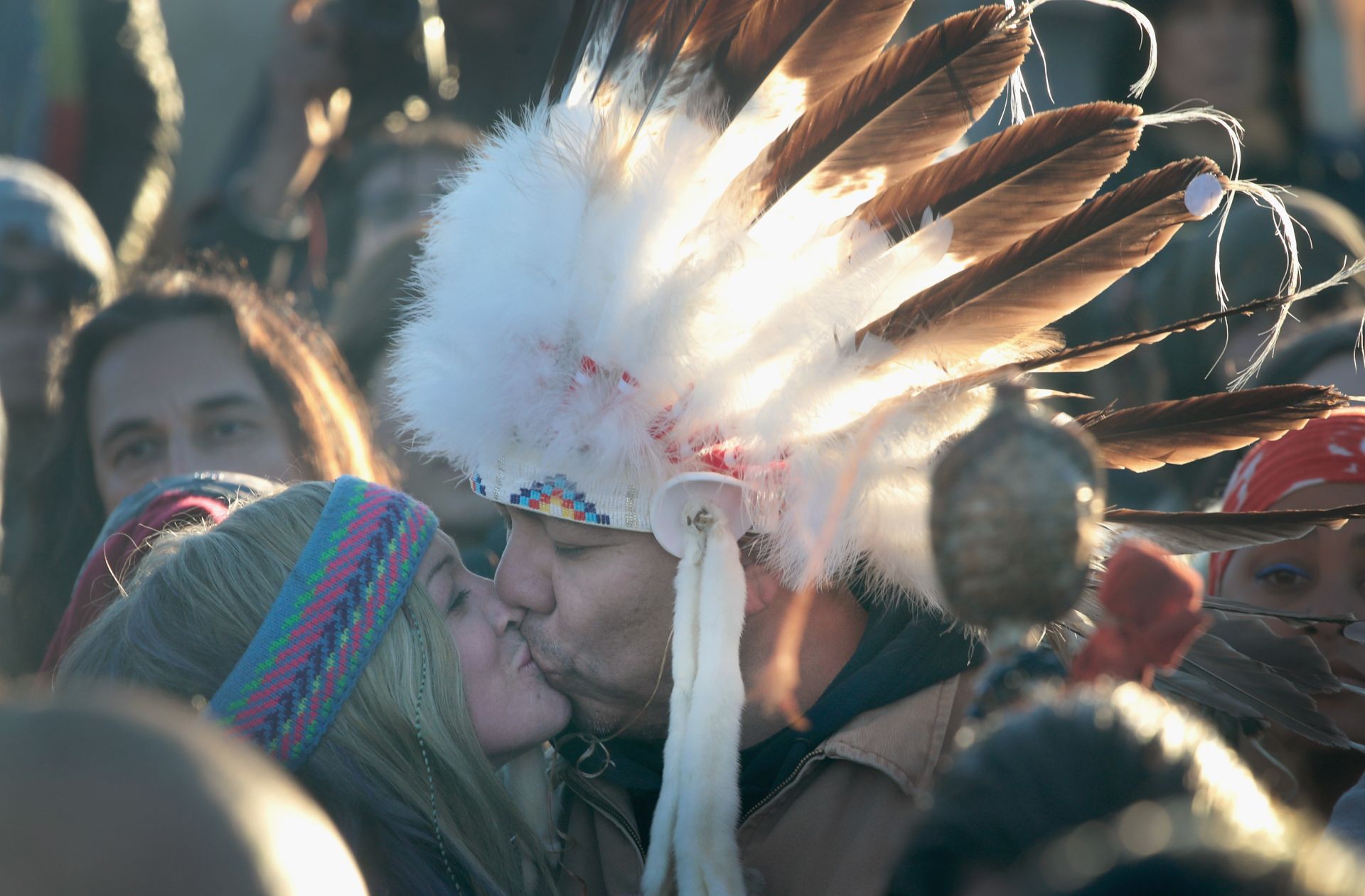 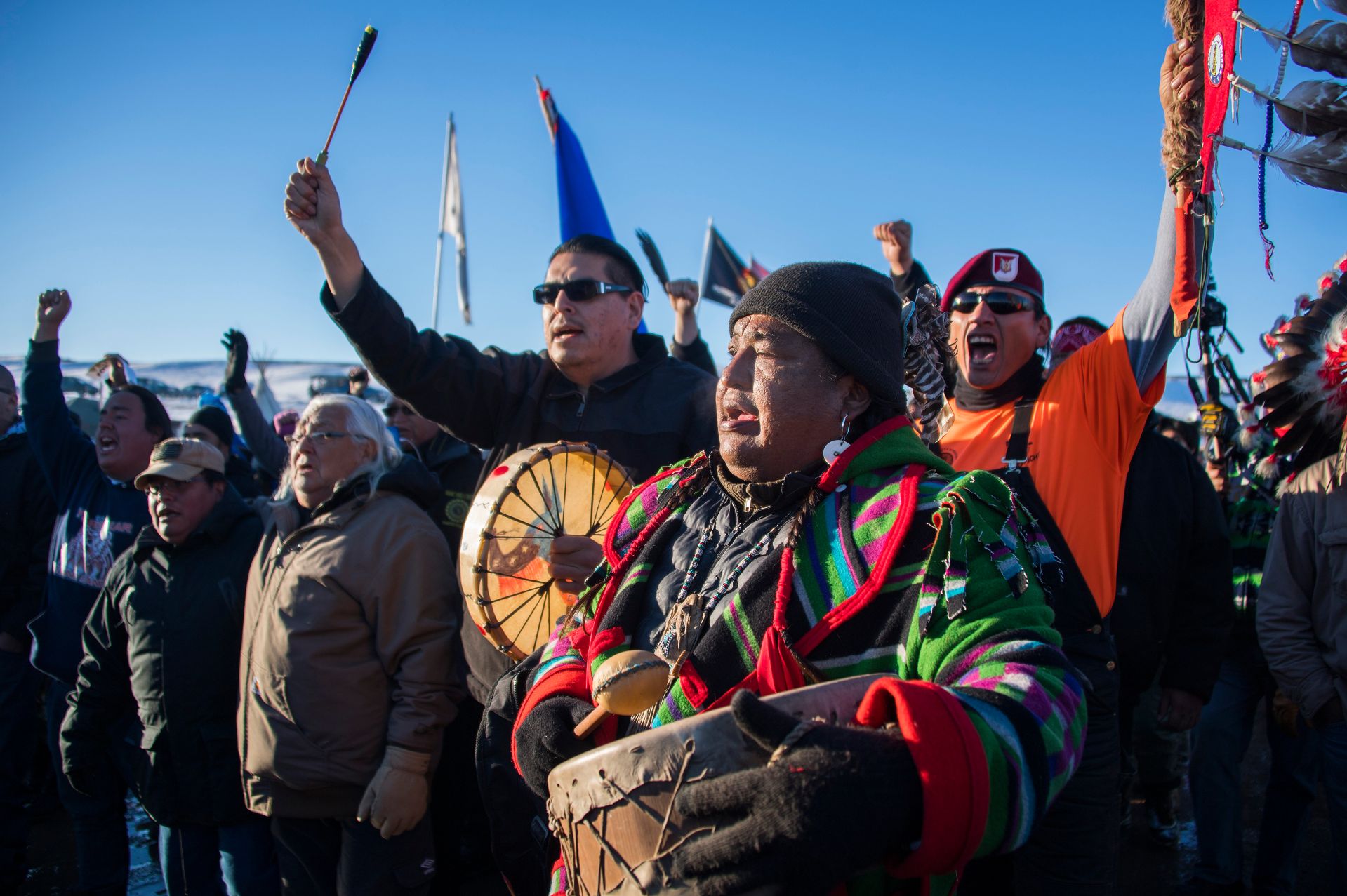 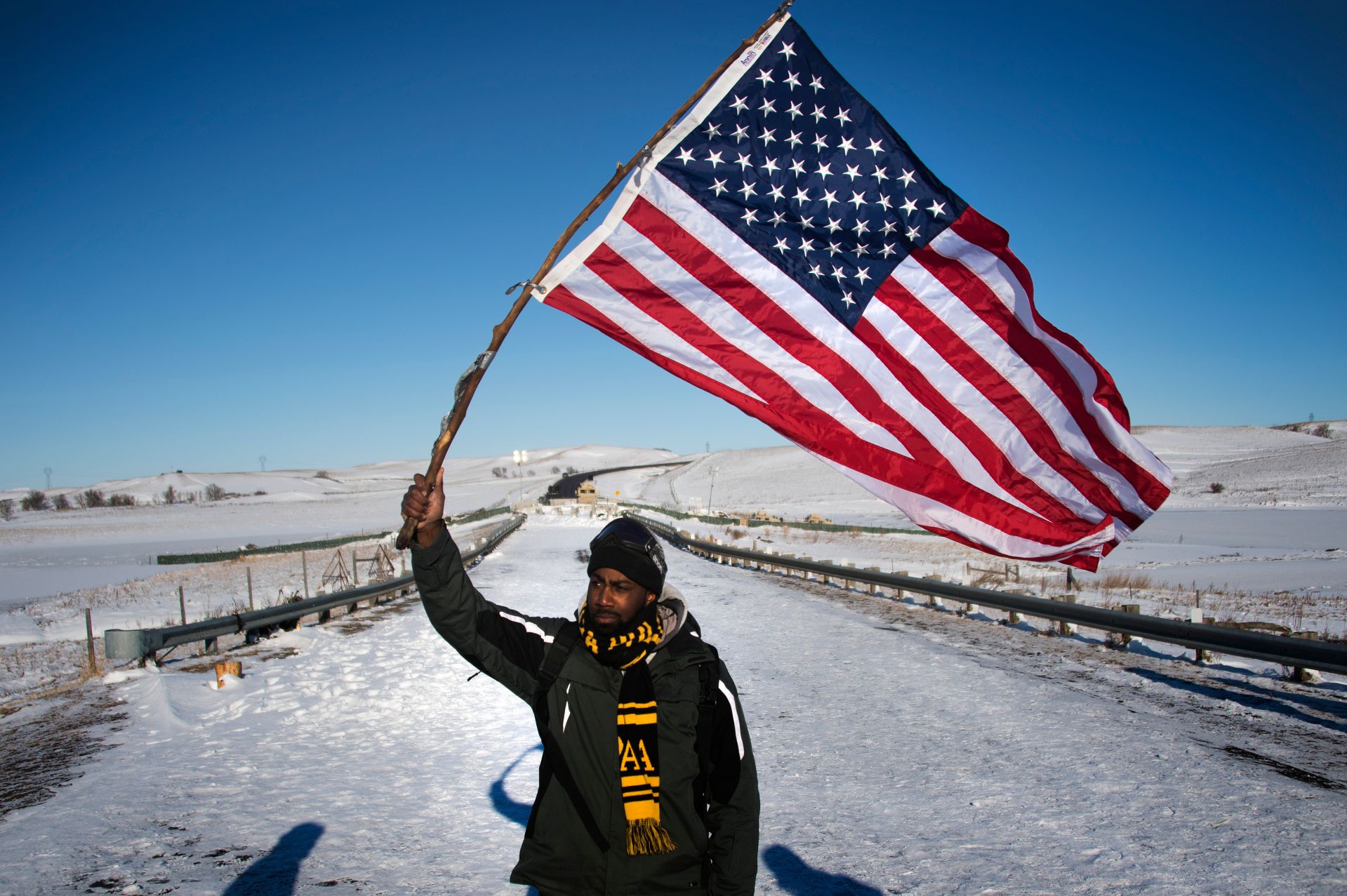 Activist and school teacher Lend Frison from Omaha, Nebraska, holds an American flag as he stands by a police barricade on a bridge near Oceti Sakowin Camp on the edge of the Standing Rock Sioux Reservation.
JIM WATSON/AFP/Getty Images) 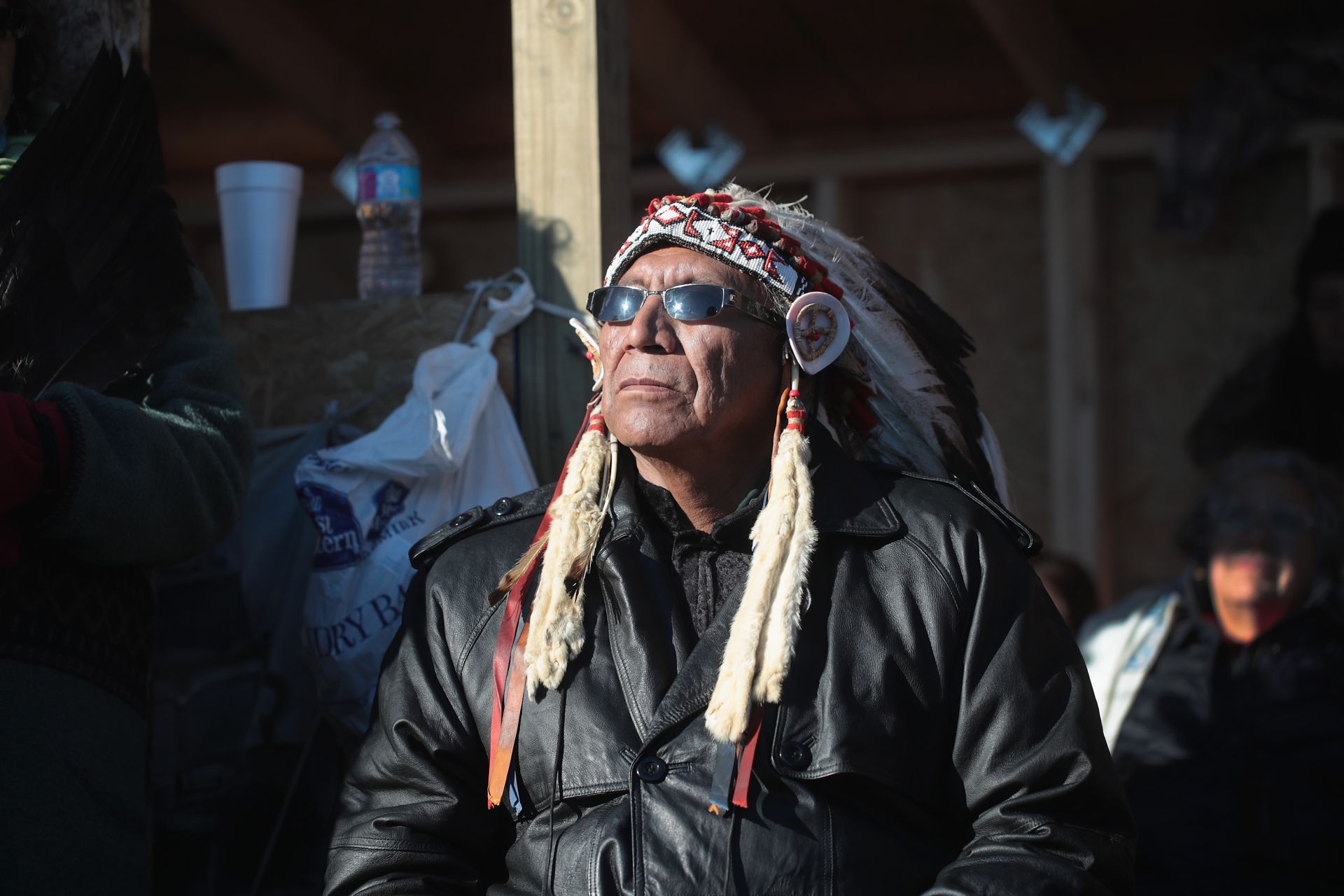 Chief Arvol Looking Horse of the Lakota/Dakota/Nakota Nation listens to speakers during an interfaith ceremony at Oceti Sakowin Camp on the edge of the Standing Rock Sioux Reservation.
Photo by Scott Olson/Getty Images
sagelazzaro 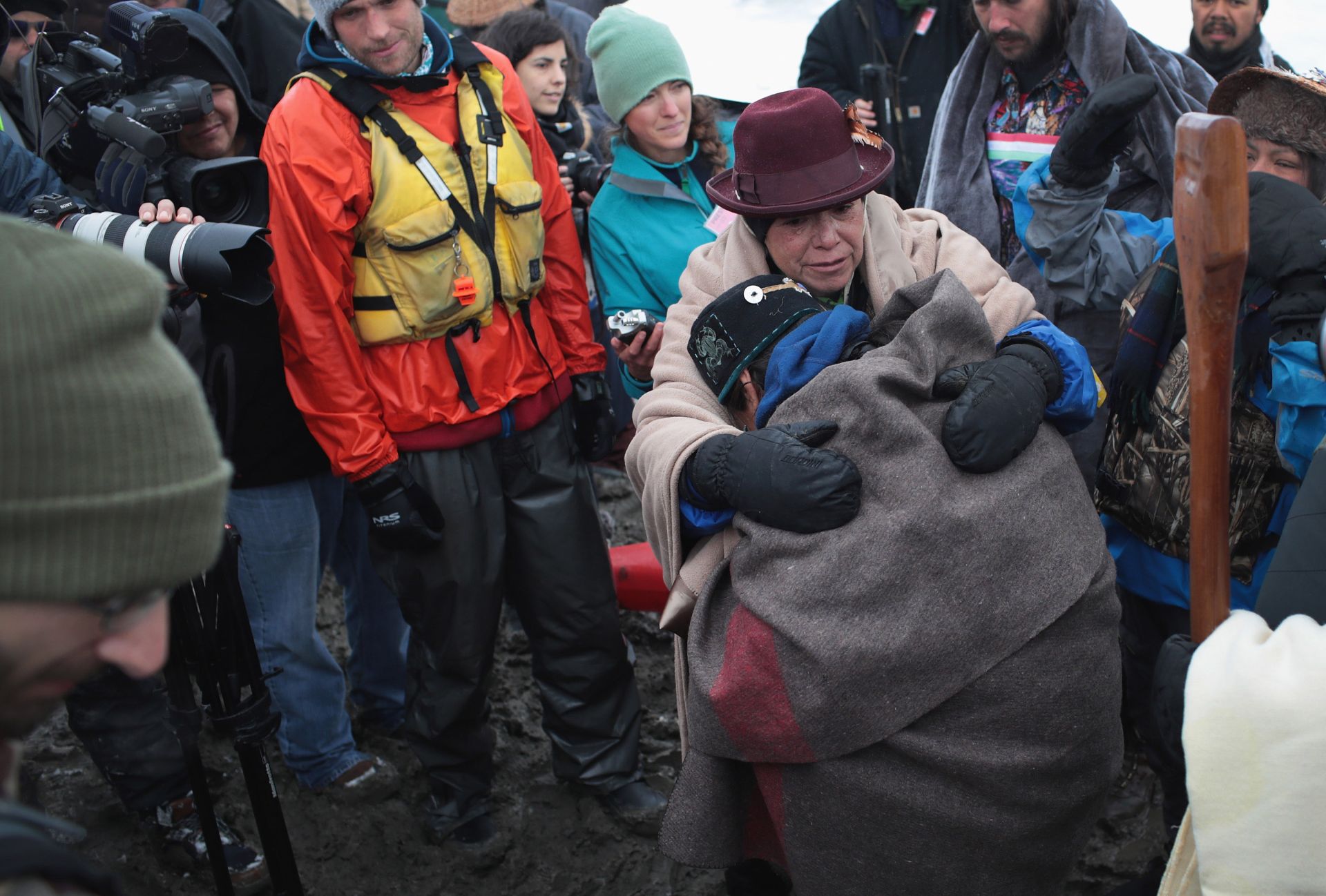 Native American activists from the Colville tribe in Washington state embrace after stepping on shore following a journey from the headwaters of the Missouri River in a dugout canoe to join activists at Oceti Sakowin Camp on the edge of the Standing Rock Sioux Reservation.
Scott Olson/Getty Images
Advertisement 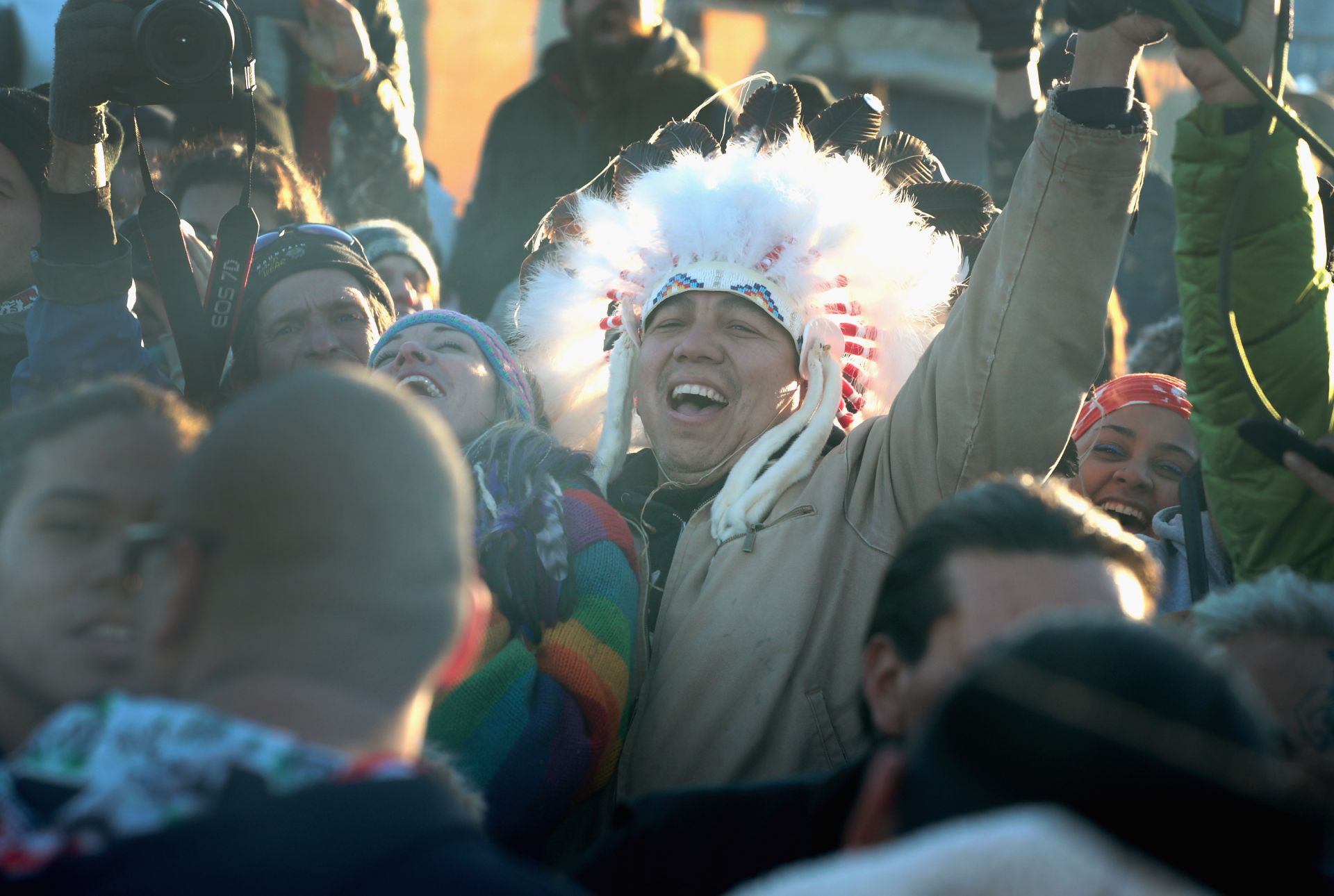 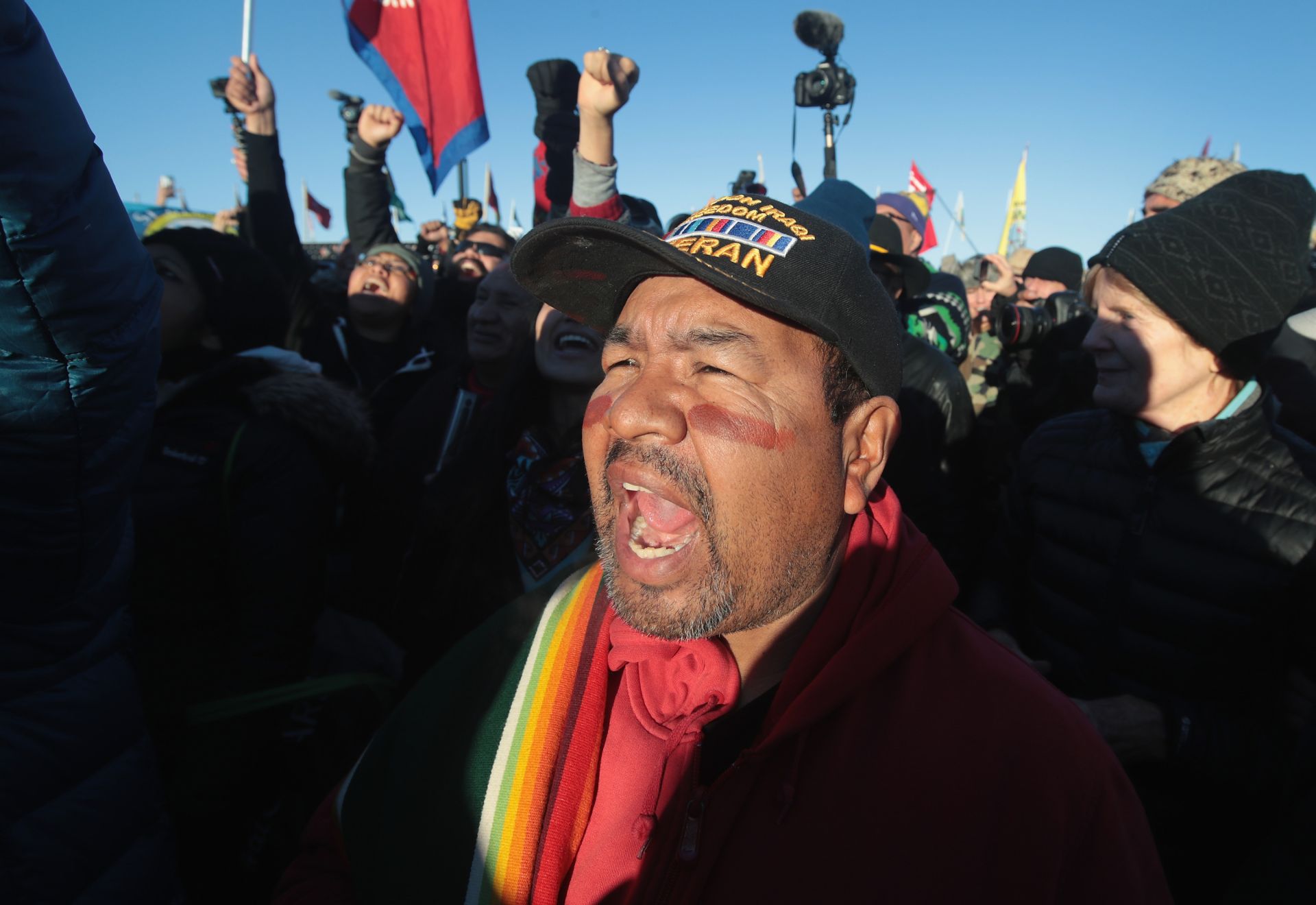 Protesters chant after the announcement the pipeline will be rerouted.
Scott Olson/Getty Images 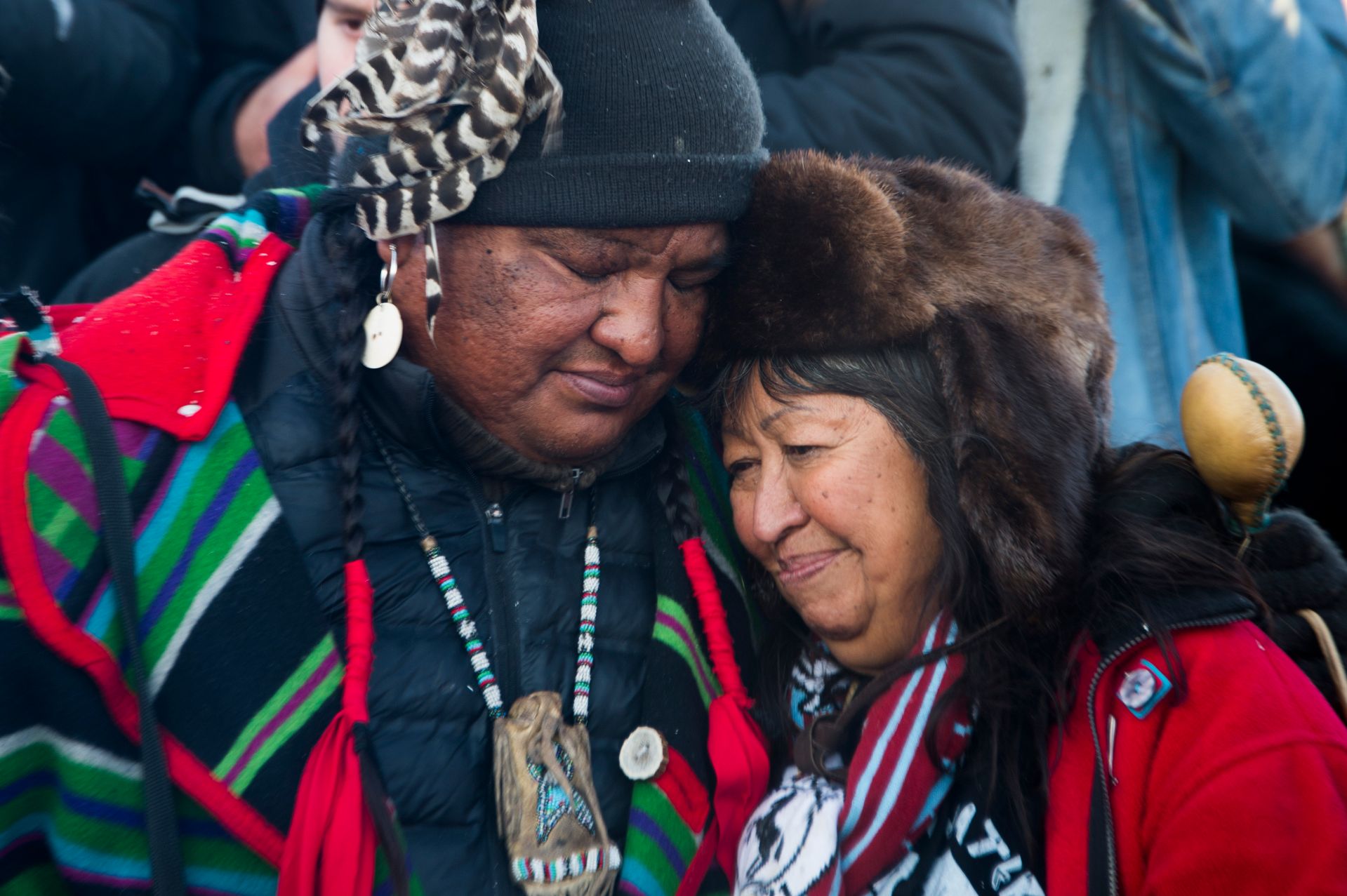 Thousands of demonstrators have camped at the Standing Rock site to stand with Native Americans.
JIM WATSON/AFP/Getty Images 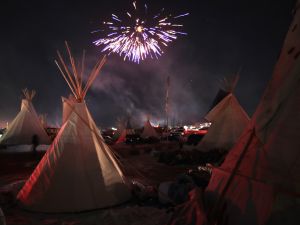 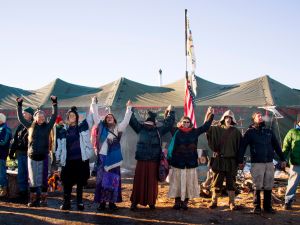 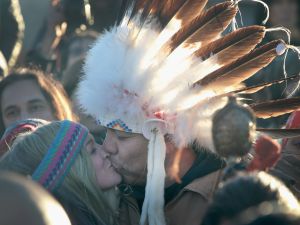 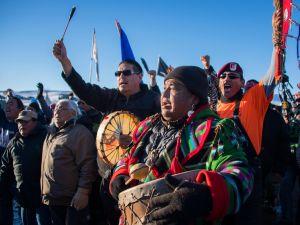 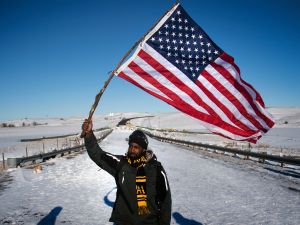 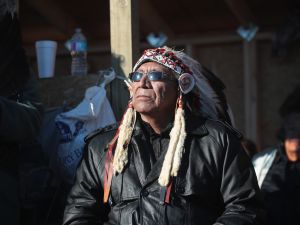 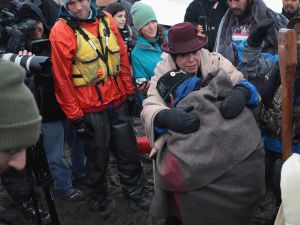 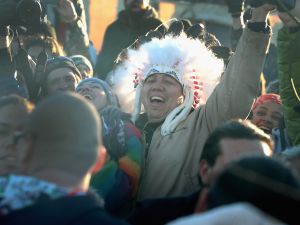 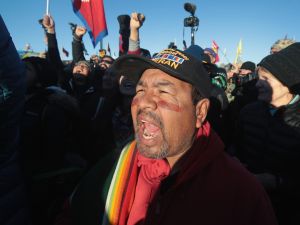 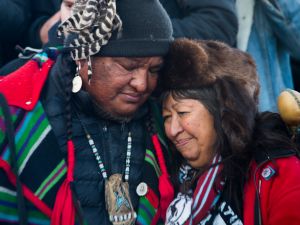 Last night, the US Army Corps of Engineers announced it will not allow the Dakota Access Pipeline to cross under the lake near the Standing Rock reservation. This marks the end of a months-long standoff that had Native Americans and thousands of other activists protesting the 1,172-mile-long pipeline that would transport oil and potentially contaminate the Sioux tribe’s supply.

“We wholeheartedly support the decision of the administration and commend with the utmost gratitude the courage it took on the part of President Obama, the Army Corps, the Department of Justice and the Department of the Interior to take steps to correct the course of history and to do the right thing,” reads a statement released by Standing Rock Sioux Tribal Chairman Dave Archambault II.

Following the announcement, the Native Americans and other activists broke into a celebration that included music and fireworks on the reservation. Flip through the slides above to see powerful images of the victory.

While there is still more to be done, this decision marks triumph after months of the protestors being subjected to excessive force. Native American drone pilots have captured footage of police clad in body armor launching percussion grenades, shooting a constant barrage of water at protesters in freezing temperatures and aiming guns at unarmed protesters holding their hands high above their heads. Another video shows that construction on the pipeline has continued at night under the cover of darkness. There have also been many accounts of law enforcement using phone jammers to prevent activists from sharing what has been happening at the front lines of the protest.