While watching Natalie Portman’s eyes well up continually as the young widow Jaqueline Bouvier Kennedy in Pablo Larrain’s arty biopic Jackie, I realized GRIEF is this Oscar season’s primary theme. Portman’s Jackie walks dazedly through sets familiar from House of Cards in what to my untrained eyes look like a pink Chanel suit, suitably blood stained following her husband’s 1963 assassination-by-sniper. This Jackie is in an echo-chamber of grief while the father of her children and the country, JFK, lies on the cold steel of a pathologist’s table, brains here and body there. She snaps at her brother-in-law Bobby (a lost Peter Sarsgaard), bristles at that ambitious Texan-turned-president LBJ, confesses to craggy John Hurt as “The Priest,” and weaves her Camelot blarney to Billy Crudup’s mellifluous-voiced “The Journalist.” Greta Gerwig remains lost under a wig bigger than her part as the First Lady’s lady-in-waiting Nancy Tuckerman.

Trauma! Shock! Widow PTSD! We get it.

Trauma! Shock! Widow PTSD! We get it.

The job of the grieving political wife is crafting her husband’s legacy — even as the brittle debutante vodka-and-cigarettes her way through enough wardrobe changes to arouse Imelda Marcos’s jealousy. Grief is never easy, but given a dose of redemption, it hits that sweet spot of an awards drama. And, yet, perhaps this particular biopic is simply too on-the-nose, with so much bickering about open or closed caskets, and so much gory historical ground so thoroughly covered. Equally problematic is the portrayal itself: Portman’s epic, arty, coiffed sulk is distancing: she is playing Jackie as icon, more a whispery Marilyn Monroe (that other Kennedy conquest) than the posh, educated, accomplished powerbroker’s daughter Jackie nee Bouvier was. While Portman acts feverishly through her eyes, the audience remains dry-eyed. That may account for why Portman is a Best Actress contender and the movie is hovering at the low end of the ten Best Picture hopefuls.

For me, I don’t need that grief over the JFK assassination filtered: my first real memory, like that of so many others of my generation, is the JFK assassination televised in black-and-white at my nursery school. Mixed in with memories of the foul bubble-gum pink soap the teachers used to wash out our mouths, and the fear of peeing ones pants in public, is the topsy-turvy image of our fathers and mothers sobbing uncontrollably in the streets, behind the wheel, beneath their girdles, chain smoking their cigarettes. Parents were not supposed to do that; that was our territory. And, so, like the assassination of Martin Luther King, and then Bobby Kennedy, even we preschoolers grieved for a nation’s lost innocence mirroring the tears of Mom and Dad.

And then, having watched Jackie at the local art cinema, Upstate Films in Rhinebeck, I walked out into the icy night, booted up my phone only to discover that Debbie Reynolds had followed her daughter Carrie Fisher into the grave. This cruel year of the Grim Reaper has scythed out: George Michael, Prince, Alan Rickman, Gene Wilder, David Bowie, Harper Lee, Umberto Eco …..you see where this is going. We are grieving and when I see the mass of Oscar films, most resonate with bereavement, some more successfully, some less.

What is Manchester by the Sea, the movie I hesitate to recommend to friends already bereft, than a movie about an affable man (Casey Affleck) pushed to the farthest corner of his existence by a tragic fire? When tragedy strikes anew, he attempts to pull himself out of his emotional hellhole in order to shelter his grieving nephew. What’s so compelling, and Oscar-appealing, is the way that a broken-ass Affleck faces into the melancholy’s harsh wind, presenting a dead man walking through grief’s storm. This is the feel-bad movie of the season, an extremely finely-crafted, deeply emotional drama that explores the many ways loss changes us – how each individual experiences it uniquely and yet it is universal.

Grief also propels Captain Fantastic. I spent the movie’s final half hour leaning away from my mother, weeping. These were not gorgeous liquid Portman tears, but goopy, snotty awful ones that soaked my sleeve. Having buried my share of family members, and tried to raise intelligent children in a world of constantly changing technology, I fused to the drama of an eccentric father (Viggo Mortensen) raising a flock of wild geniuses in the wilderness. When his bipolar wife commits suicide while recovering at her parents’ house, their utopia is abruptly suspended as they hit the road to get to the church on time for the funeral. The father’s desperate desire to be able to mourn his wife in a way that’s true to how they lived (spoiler alert: the ultimate triumph is flushing the mother’s ashes down the toilet, an ecological act of which she would have approved), summoned all the grief I hadn’t realized I was carrying around with me before I entered the theater.

And there’s more: In Moonlight, Mahershala Ali’s magnetic father figure disappears at the end of the first act. When he dies abruptly off screen, his sudden absence shocks the audience. His character seems to represent the fathers that have passed in prison or on the streets, leaving grief and chaos in their wakes. Sully can be seen as grief avoided: the pilot Chesley “Sully” Sullenberger (Tom Hanks), despite his heroism, is haunted by what might have been if his flight had crashed, sacrificing an entire airplane full of souls including his own.

Even La La Land spotlights Ryan Gosling’s hero mourning the death of jazz – and a white man’s need to save it. The loss of an Indian boy’s biological family and its partial restoration wrenches Dev Patel’s orphan in Lion. In one of my favorite period films, Loving, the threat of white supremacist violence threatens true love with grief in a state that won’t allow a married couple to co-habitate in peace. While Arrival begins in an elegiac tone, this sci-fi movie that plays with the balance of time, is setting up a question that relates directly to how we handle grief: If we can see into the future, and know that our children will predecease us, will we be strong enough emotionally to handle that eventuality when it arrives?

As the curtains close on another year, the Oscar contenders seem surprisingly in sync with the country’s current blue mood: we are grieving for what we have lost and for those we have lost. But with mourning comes resilience. To quote Carrie Fisher: “Sometimes you can only find Heaven by slowly backing away from Hell.” 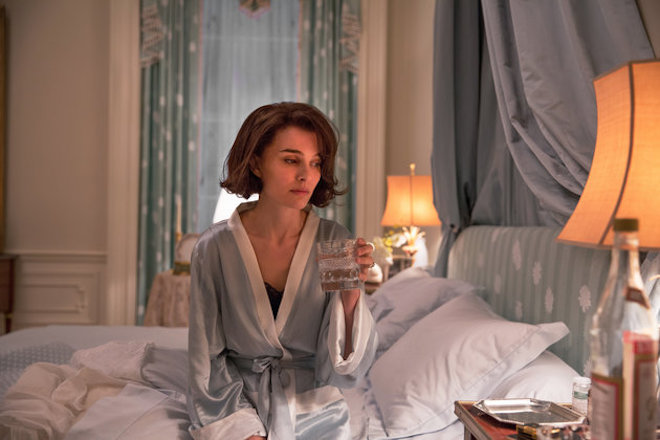