Annette Bening, one of the frontrunners for the 2016 Best Actress Oscar for her performance of an unconventional, hippie-out-of-her-time-zone mom in 20th Century Women, received a noncompetitive kudo Dec. 4 when New York Stage & Film’s Winter Gala honored her and set designer David Rockwell at the Plaza Hotel.

There was no mistaking who was being honored for New York Stage and who was being honored for Film. Rockwell’s credits are film-free–except for designing Oscar shows in 2009, 2010 and 2014 (winning an Emmy for it in 2010)–and has amassed 21 Broadway credits, winning a Tony last year for designing She Loves Me, thereby foiling a Tony grand slam for Hamilton, the most successful show started at NYS&F.

Bening’s New York Stage debut was made in Tina Howe’s Coastal Disturbances in 1987 at Off-Broadway’s long-gone Promenade Theater and on Broadway at the Circle in the Square Theater, winning a Tony nomination for Best Featured Actress for the latter. In 2014, she returned here to do a little Shakespeare in the Park (King Lear’s Goneril). In between, she racked up 31 features, six TV credits and four Oscar nominations (The Grifters, American Beauty, Being Julia and The Kids Are All Right).

She met Warren Beatty on her seventh film, playing Virginia Hill to his Bugsy Siegel, and followed that with a third film version of Love Affair/An Affair To Remember. Their third film teaming—Rules Don’t Apply, with her playing the Baptist stage-mom of one of Howard Hughes’ potential starlet conquests—just went into release.

Johanna Pfaelzer, artistic director for New York Stage & Film, explained the honoree choices this way: “We’ve been enormous admirers of Annette for years, of course. Then, there was a funny confluence of events this year where she was working on a film project, The Seagull, which had a number of New York Stage & Film family members attached to it. They actually filmed it about an hour away from our summer residency in Poughkeepsie in upstate New York on a beautiful estate. Leslie Urdang, one of our founders, is a producer, and Michael Mayer, who’s on our board, is the director. I don’t know when it’s coming out, but I will tell you it’s beautiful.”

Peter Gallagher, a NYS&F stalwart who played an extramarital diversion for Bening in American Beauty, presented her award and saluted her as “a fearless illuminator and staunch defender of humanity, in all its complexities and all its surprises.”

They met in a motel room, on location in L.A. for American Beauty, and went right to work, the actor recalled. “I was wearing Cary Grant’s wig, poofed up in an effort to infuse a little Donald Trump into my role of Buddy Kane, the real-estate king.

“It’s the most fun I ever had at work,” he confessed, with a hint of glee. “It’s so thrilling and moving and funny and professionally reassuring about being in a scene with Annette because her humanity doesn’t get turned off—ever—not when you first meet her, not just before the camera rolls, never during a scene. Even if she’s playing a person who doesn’t appear to have a lot of humanity, you know it’s there underneath and you know she’s going to surprise you with it, and, in doing so, bring the whole world a little closer to make you feel a little less alone. And she doesn’t abandon her humanity after the scene is over or even years later. As an actor, she’s all you aspire to be. And, as a person, I dare you not to fall in love with her.”

Bening reached the podium quickly and wasted no time bringing the lofty tone down a level or two. “Peter,” she said, “is the only man I’ve ever been able to say on screen, ‘Fuck me, Your Majesty!’” It got an uproarious reaction, and she pressed on.

“The most important attribute of any actor is humility,” she said as she fished in her purse for a Times clipping, “so I’m going to read you what Ben Brantley said about me: ‘Annette Bening does Goneril with the statuesque poise of a class valedictorian at a poetry-reciting competition.’ Thank you. I just wanted to get that off my chest.”

‘After 25 years of marriage, anything smart, principled or clever I say has, in some way, been informed by my husband.’ -Annette Bening on Warren Beatty

Setting up the speech to come, she admitted, “I have prepared a lovely speech, stolen completely from the following writers: Ann Roth, Edward Albee, Harold Clurman, Robert Edmond Jones–and Warren Beatty?? After 25 years of marriage, anything smart, principled or clever I say has, in some way, been informed by my husband.”

Although she’d not worked there before, the 58-year-old actress was nevertheless grateful “for the presence of the New York Stage & Film, which represents the best of what humans engaged in storytelling can do for each other—give belief, support and intense incubation for someone or a group of people or a person with an idea.

“The successes you have are legendary, but maybe the most important part of what New York Stage & Film does is to support the precious ideas that don’t quite jell. We’ve all worked on projects that never quite come together, and New York Stage & Film is a place for people to discover this tough part. That’s beautiful. And they are here to support and nurture, as an art form, whatever is the outcome.”

Musical selections for the evening came from shows designed by Rockwell. Tony winner Billy Porter did a medley from Kinky Boots, and the hoofing train porters of On the Twentieth Century rap-a-tap-tapped their way through “Life Is Like a Train.”

Rockwell’s next job, the one-night Roundabout benefit concert of Kiss Me, Kate, had Richard Kind and John Pankow brushing up their Shakespeare before rehearsals.

Jujamcyn’s Jordan Roth, who debuted as a producer on the same show Rockwell debuted as a designer (The Rocky Horror Show), presented the designer his award.

Rockwell, 60, likewise a NYS&F novice, also understood the uniqueness of the group, backing into its importance in his acceptance speech: “Frankly, in thinking about it, I know I couldn’t have gotten here without a really great start. When I was a kid, my mom gave me the space and encouragement to develop my curiosity and interest in theater—live theater. She literally did that by starting a community theater in Deal, New Jersey—not that I’m comparing our bucolic theater to New York Stage & Film.

“This year alone, your productions won Tony Awards for Best Musical and Best Play,” he pointed out. “At Mom’s theater, the awards were more likely Best Supporting Performance by an Orthodontist or Best Use of Crepe Paper in Set Design. Take my word for it: They’re waiting for Guffman there as we speak. But, glory aside, what community theater gave me was a safe space to nurture creativity, and that, in such a large universe, is the essential work of New York Stage & Film.”

The 79-year-old Beatty, affable and accessible like a man with a new movie in town, is making something of a comeback in Rules Don’t Apply after an intermission of 15 years. For decades, he has harbored the ambition of playing Howard Hughes, a bizarrely eccentric man-about-Hollywood who won Jason Robards an Oscar (for Melvin and Howard) and Leonardo DiCaprio an Oscar nomination (for The Aviator).

Beatty might do well, too, if enough Academy votes can actually spot him in the film. That’s not easy. As director, he kept the character in the background and barely visible in the dark. Explained Beatty, “You know, Howard Hughes always wanted to be in the dark, and that particular brand of narcissism, I think, is fun.”

Although the Oscar keeps eluding Bening, she just finished a film in England where she plays an Oscar-winner, Gloria Grahame, in a movie based on her last desperate days, Film Stars Don’t Die in Liverpool. The two actresses never met, but Bening referenced Grahame’s tough-broad performance in The Big Heat for The Grifters.

“I saw her Gloria yesterday, and it’s just extraordinary,” declared Frederick M. Zollo, a theater producer since 1984. His wife, Barbara Broccoli, produced the Grahame film, the 007 film franchise and, currently, the sold-out Othello at New York Theater Workshop with David Oyelowo and Daniel Craig. The heavy, thoughtful way she said, “I don’t think so,” makes one fairly certain it won’t transfer to Broadway. “We love where it is. It’s an amazing production. We couldn’t be more excited about it.”

Bening has done stage work in Los Angeles—notably The Cherry Orchard, recently adapted by Karam for Roundabout—but has bowed out of Broadway projects with regularity, pleading family. “As soon as the kids are grown, I’ll be back,” she vowed. (We’re talking Ella, 16; Isabel, 19; Benjamin, 22; and Stephen 24.) She promises… 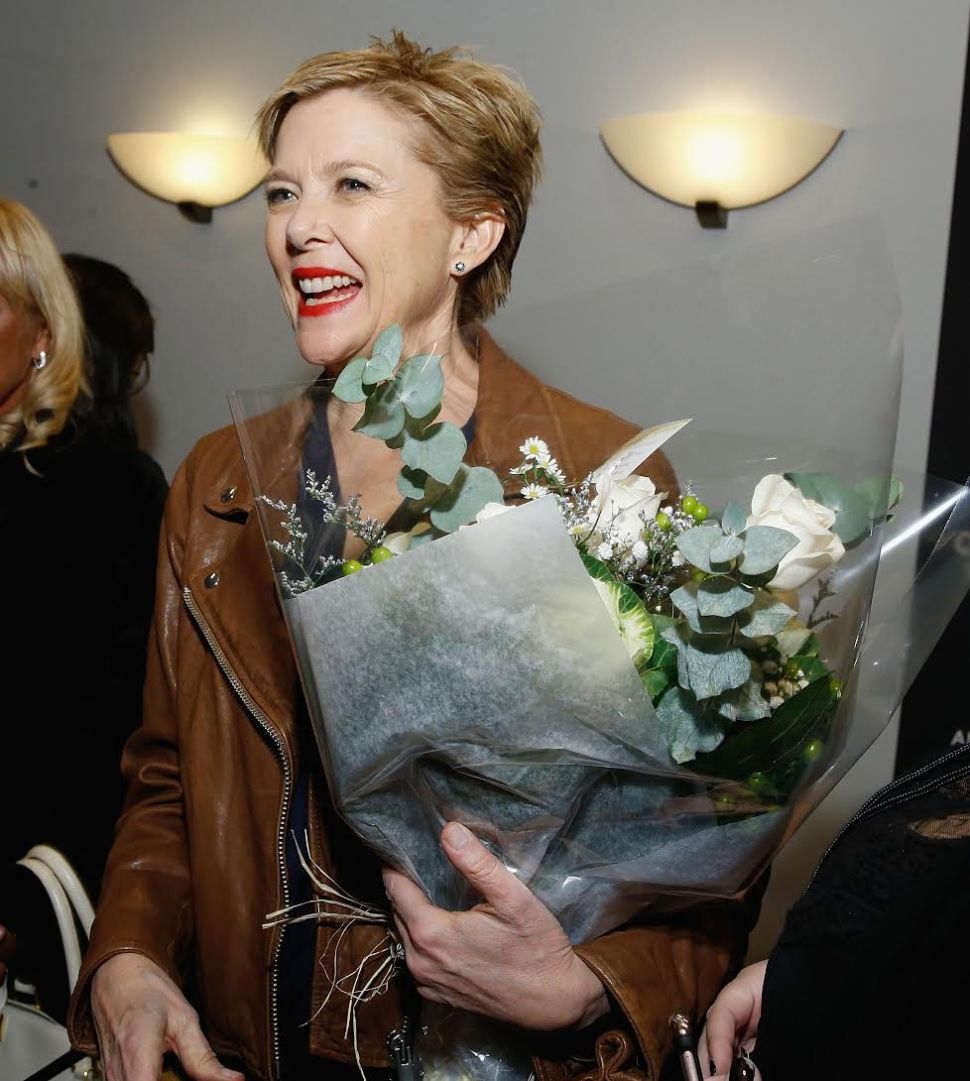