Some shows open on Broadway with nothing on their minds but a joyous desire to send the audience out humming, smiling and feeling just plain terrific. Such a show is the polished, familiar but freshly refurbished chestnut A Bronx Tale. First an autobiographical one-man show by the ingratiating character actor Chazz Palminteri, then a 1993 movie directed by and starring Robert De Niro as a neighborhood gangster who becomes a life-long mentor to an impressionable kid, followed by a honest-to-Pete stage adaptation on Broadway, and now a Broadway musical, co-directed by De Niro and theater veteran Jerry Zaks, it’s been a big hit every time. In its present incarnation, with take-home tunes, a first-rate cast and lively choreography, it clicks like a new Rolex.

The setting is the mean streets of 1960, where a personable 9-year-old Italian-American kid from the Belmont Avenue section of the Bronx named Calogero witnesses a murder on the front steps of his family’s apartment building but refuses to rat on the killer, a much-feared and revered hood named Sonny, played memorably in the movie by Palminteri, and now by the dynamic Nick Cordero, who comes to the genre with ease, having previously won raves in Woody Allen’s Bullets Over Broadway. Impressed by Calogero’s bravery and spunk, Sonny renames him “C” and takes him under his protective wing, forbidding every punk on the street to lay a hand on his new protégé. Instead of school, C gets his education hanging out in crap games, bars and pool rooms with characters called JoJo the Whale, Frankie Coffeecake and Tony Ten-to-Ten in Runyonesque costumes by the great William Ivey Long, on colorful folding cartoon sets by Beowulf Boritt. Palminteri has adapted his own book, with a score by Alan Menken and Glenn Slater, which crackles and pops with paisano lyrics like “Shut your trap’or/Get it in the crapper” and “She’s like the pepperoni/She ain’t fit for matrimony.”

As the action moves forward, the tension grows in a tug of war between Sonny and C’s square but solid-citizen father Lorenzo (sturdy, stalwart and handsome Richard H. Blake in the role De Niro played on film), an honest, hard-working bus driver. C is played by Hudson Loverro, a tiny but dynamic force of nature with feet of mercury and a voice that carries through the lobby and out the door of the Longacre Theatre all the way down Broadway. This kid has pep and power and can really sing and dance, turning a production number called “I Like It” into a real showstopper. In the second half of the plot, when he turns 17 in 1968, C is played with equal zest by newcomer Bobby Conte Thornton, who makes a formidable Broadway musical debut. The conflict between the action and excitement of Sonny’s underworld and the solid but square values of his straight arrow is familiar, but the resolution is unusual because A Bronx Tale refuses to whip events into an either-or denouement. There are life lessons along the way to manhood, such as the belief C’s father instills in his son’s set of ethics that the real tough guy in life is the working man who can hold his head up with pride, and there is nothing sadder in life than wasted potential. Both of C’s male role models have wisdom to share, but the only one with dominion over himself in the long haul is C himself. The big test of his true colors comes when he falls for a black girl from his gang’s enemy neighborhood and Chas to choose the side of the Bronx where his real heart belongs. Simple bromides are miraculously avoided with the aid of rousing songs such as “In a World Like This” and “The Choices We Make”.

No big stars on view here but a number of people who deliver star turns, including a Greek chorus singing doo-wop in a period 60s style that provides a perfect commentary on the action or playfully tweaks the scene in some way. On the whole, A Bronx Tale is a pleasant surprise guaranteed to send you through the exit doors smiling. 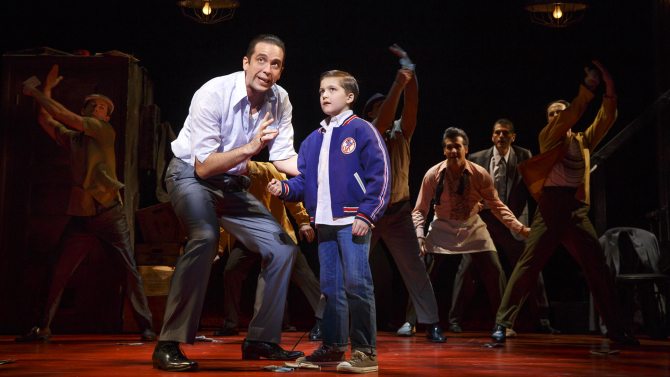