Who would Oliver Queen be, had he never stepped foot aboard the Queen’s Gambit? What would he be without Lian Yu, without Slade Wilson, without Amanda Waller, Ra’s al Ghul or Bratva? What could he do with a body more ravaged by years as a billionaire party boy than it is by a network of criss-crossing scars? What if Oliver Queen had never, as he’s officially been saying for 100 episodes now, “become something else?” What if he stayed the same? Would he be happier? Almost undoubtedly. But would he be better?

That’s…a little more complicated, and also the general theme of last night’s at-once heartwarming and heartbreaking hour of Arrow. As part three of the CW’s four-night mega-DC-crossover, it lacked the straight fun and bombast of last night’s The Flash. But “Invasion!” made up for it by going for the gut, and not in the way it, uh, usually does. It was Arrow both at its cheesiest and its most effective. A day later, I can’t decide whether it was an annoying distraction from the main storyline or the best Arrow episode in all five seasons. Either way, there’s no denying it offered something we’ve never seen and certainly something new for Oliver, John Diggle, Sara Lance, Thea Queen and Ray Palmer: It offered a world without loss.

Here’s the gist: The Dominators, introduced as quite possibly the galaxy’s least interesting extraterrestrials in The Flash, have Oliver, Diggle, Ray, Sara and Thea hooked up to a device, a sort of pseudo-virtual-reality in which our five heroes are living their best lives. Oliver, having never stepped foot on his father’s yacht, is set to marry a very-much-alive Laurel Lance (Katie Cassidy, not missing a physical or emotional beat). Robert Queen never shot himself in the middle of a stormy ocean. Slade Wilson never drove a sword through Moira Wilson’s stomach. Thea runs Verdant, Sara does not belong to a mystical assassin cult and life is…normal. Beautiful, warm, whole and so, so strangely normal.

But it’s also wrong. Oliver — and, soon, the rest — keep flashing back to a life much darker than this one, more painful (I’m not going to assume all of you watch HBO’s Westworld so, trust me when I say this is basically the exact plot of Westworld). A simple chat between Thea and Moira over the wrinkles on a bridesmaid’s dress cuts to Moira’s brutal death in front her children. A piece of fatherly advice from Robert Queen flashes to a rain-drenched life raft and a gunshot. Someone is running around under the green hood, but it’s definitely not Oliver: “You know I’m not much of a fighter,” he tells his father. And in the middle of the city, a building bearing the name Smoak stands taller than the rest. It’s not long before Oliver, on the night of his rehearsal dinner, finds himself traveling almost on instinct into the Arrow Cave, where he finds Felicity and John, who has taken up the Green Arrow mantle to atone for his actions overseas.

First of all, I’m all the way in on an alt-universe spinoff where John Diggle is the Arrow, because David Ramsey is terrifying here, probably more intimidating than Stephen Amell at his most violent. But this scene is also key – to the episode, to Oliver, to Arrow as a whole. Oliver tries to convince John that this perfect world where everything is beautiful and nothing hurts isn’t theirs to live in. It’s not reality. John, enraged, throws Oliver back into the elevator: “You have everything. Everything!” John says. “Stop trying to throw it away.”

And that is the conflict at play through all of this; the difference between reality and a dream; the line between getting what you need and being handed what you want. There’s a beautiful, wrenching scene between Oliver and Laurel — Amell perfectly desperate, Cassidy perfectly confused — when Oliver asks to skip the wedding, skip the ceremony and the waiting to get married right that instant. Because he knows all this is fleeting. For Oliver, happiness is always fleeting but this is different, something he’ll never have a chance at again.

Equally devastating is Thea’s choice, even after realizing the truth, to stay in this altered reality. “What is waiting for us, wherever we are right now?” She asks Oliver. “Nothing. Nothing but pain and suffering.” And hollllly shit, she’s not wrong. To be an Arrow character is to live in near-constant pain and suffering, most commonly in the form of watching a loved one murdered in front of you. But that’s also the point, right? It took “five years in hell” for Oliver to become a hero, and even longer to become a good person. If Arrow had any connective tissue between each season it would be a Baptism by fire. Pulling your head above the , just when you’re starting drown. In the world cooked up by the Dominators where pain and loss don’t exist everyone is a pale imitation of their real selves, because it’s the pain and loss that molded them in the first place.

So of course Thea changes her mind, and of course all five of our heroes make it out of the simulation, together. But first, a showdown with the Ghosts of Big Bads Past (what up, Damien Darkh!) that was unsurprisingly badass, because an Arrow episode can’t be ALL tears and hugs. Thea firing an arrow to Sara, who uses it to stab a dude is the actual scientific opposite of a hug, actually. There’s been tests.

But what comes after hits almost as hard, and means more to the future of Oliver Queen than anything that came before it; a chance, finally, to say goodbye to Laurel Lance. “The person you fell in love with, that’s not me,” he says. “You’ll always deserve better.”

While I won’t dwell on the fact that the Dominators built an exit into their simulation instead of…just, like, not doing that…I will say the end of this episode leads nicely into Legends of Tomorrow, with Oliver, John, Ray, Sara and Thea aboard the Waverider, flying through space. “Did you ever think our lives would get this weird?” Thea asks. Which is funny, but also telling. Because these characters’ lives are weird, and they’re painful and occasionally just, unbearably terrible. But they’re also real.

Of course, there actually WAS some cross-over shenanigans to be had here, but it was pushed mostly way, way to the side by the main Arrow-heavy storyline. Basically, Felicity recruits Flash and Supergirl to help infiltrate a company called Van Horn Industries, to steal some tech that would allow Curtis to decipher the Dominators’ language. It’s…fine, but also dragged down by the fact that Rene Ramirez decided he hates metahumans for some reason (actually, the same exact reason Tom Felton’s Julian Alpert hates metahumans on The Flash), a character trait he does a complete 180 on by episode’s end because The Flash and Supergirl save his ass.

But, no, there was still plenty of shallow fun to be had here. Cisco Ramon finally meets Team Arrow 2.0, which allows him to re-emerge from the mopey shade-cloud he’s been living under on his home show (“Your tech guy quotes movies, huh?” was fantastic). Plus, if the heavy emotional stuff did nothing for you, we will always have the image of The Flash and Supergirl high-fiving:

Let the Dominators destroy Earth. That GIF proves we’ve peaked as a species. 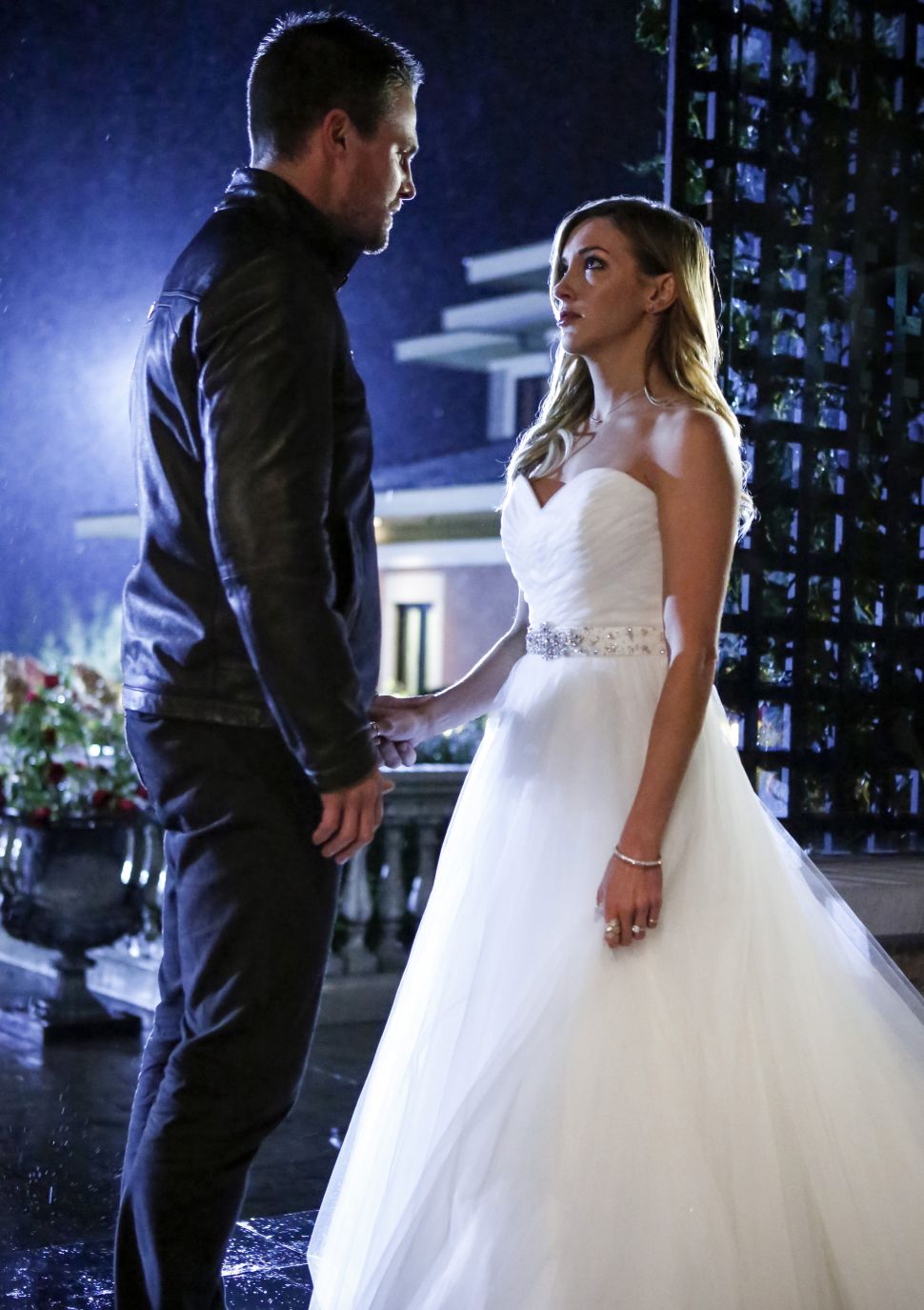