Once again, we here at tvDownload forwent the traditional “Best of” lists for television, and instead are taking things yearbook-style: we’ve asked several contributors to help us pick shows, characters and actors that fit into the superlative model, and will be rolling out the awards through the holiday season. Today’s nominees are for Biggest Flirt, Most Versatile and Biggest Transformation.

Drew Grant: Finally, a category that applies to ME! I was nominated Biggest Flirt in high school. So was that really weird girl who ate all her own buggers and fondled boys in gym class, because I’m pretty sure that category was the popular kids’ idea of a cruel joke. I don’t know if I was that flirty. I was just kind of loud and gross and on a ton of LSD most of the time at school. I was the Charlie Kelly of my class, if you will.

So in that same school spirit, I’m nominating Dennis Reynolds from It’s Always Sunny in Philadelphia for the perverse title of “Biggest Flirt.” Take from that what you will, bitches.

Dana Schwartz: Jim Moriarty from Sherlock. Are you back??? Stop playing hard to get. You know I can’t help but want you when you look so good in Westwood.

Victoria Edel: Daniel, Insecure. “You shouldn’t drive when you’re stressed,” is the most hilarious thing anyone has ever said while trying to have sex with someone. And it worked.

Nick Ross: Elliot Alderson, Mr. Robot Rami Malek whispers sweet nothings and plot twists straight into out ears every week. Do we trust him? No. Do we love him? We can’t stop.

Tom Batten: The latest season of The Walking Dead once again flirted with being compelling before returning to its comfort zone as a maudlin, stilted exercise in stifling narrative momentum.

Vinnie Mancuso: Joanna Wellick from Mr. Robot. To be clear, I make this nomination from a place of deep, absolute fear of this woman. Joanna Wellick flirts with the men she meets the way lions flirt with the gazelles they meet. She eats them, is what I’m saying. Metaphorically. Maybe also literally? Tough to say. Tough, to, say.

Emma Fraser: Even when everyone is getting murdered on And Then There Were None Aidan Turner’s turn as Philip Lombard steamed up the screen whether in a tux, a towel or a robe. For more Turner swoons in period garb check out Poldark.

Lorraine Duffy Merkl: Two Broke Girls’s Max Black (Kat Dennings) No man is safe from her come-ons, and sexual innuendo – except for Oleg the fry cook.

Jake Flores: Barb from Stranger Things. When you’re young and you’re watching Scooby Doo you think Daphne is the hot one and Velma is a nerd, but when you get older you realize you would get real tired of Daphne immediately and Velma’s actually a total babe and probably has great taste in music and a good personality. Barb is a Velma. I don’t think she’s into guys though, i think the whole time she was going “Nancy, don’t go to those parties with boys and alcohol” she really meant “Nancy, come back to my place and fog up my thick square glasses while we listen to like, The Carpenters.”

Drew Grant: Going to hand that one over to Sarah-Violet Bliss and Charles Rogers of Search Party, for managing to make one program somehow ALL of the following things:

4) goddamn MYSTERY CRIME SHOW that involved a missing young woman, a cult, a secret pregnancy, murder, private dicks, blackmail and a drive up to Canada (among other things).

5) An entry on every critic’s “Best of” end of the year TV list.

If that’s not versatility, than I don’t know what is. (Is it those flat noodles? No, that’s Vermicelli.)

Vinnie Mancuso: Gotta agree with Drew and go with Search Party. I’m not sure I’ve ever seen a show move so seamlessly between genres; just scene-by-scene, it bounced from laugh-out-loud-funny, to absolutely terrifying, back to funny, then you’re in a cult, then the credits are rolling while you check apartment prices in Europe because you’re suddenly sure you’re wasting your fleeting youth.

Dana Schwartz: Bojack Horseman. It’s a comedy that can make you rethink your place in the universe, a show that jumps from puns to points about depression, subplots about Todd joining an improv troupe and subplots about Sarah Lynn struggling with drug addiction and the challenges of child stardom. For a cartoon about a horse, this show continues to show that it has more depth than anyone thought.

Jake Flores: Character Actress Margot Martindale from Bojack Horseman. I was on acid watching the Emmy’s when she won an award for being on The Americans. I didn’t even know she was on that. There is nothing she can’t do.

Tom Batten: Selena Meyer’s tenure as President of the United States on the latest season of Veep was marred by multiple scandals and ended in a crushing defeat but damn that lady could make a burlap sack look chic. Credit might really go more to Gary, but she would never admit it and he wouldn’t accept it if she did.

Noam Cohen: I suppose it’s boring to keep nominating Tatiana Maslany for this every year, so let’s give it to Ron Cephas Jones. Besides his super-heavy lead role in surprise network hit This Is Us, he also was a key supporting character in very different roles in Luke Cage and Mr. Robot, and plays Jaden Smith’s father in The Get Down. (Oh and he’s also the real-life dad of Hamilton‘s outgoing Peggy, Jasmine Cephas Jones.)

Nick Ross: Steven Universe.  A children’s cartoon that discusses feminism, personal relationships, gender norms and queerness all while adding in sci-fi tropes and Dragon Ball Z-level action set to catchy, ukulele-driven songs? The show has everything.

Emma Fraser: BrainDead for its twist on political satire when we needed it most and for giving us the weirdest and best sex scene of 2016, which included salami, Aaron Tveit and Mary Elizabeth Winstead. A one and (sadly) done, very special show.

Lorraine Duffy Merkl: Rob Lowe. From dramas like Code Black, West Wing, and Brothers & Sisters to sitcoms like The Grinder, and Parks & Recreation, the former Brat Packer can do it all and still look pretty doing it.

Vinnie Mancuso: As already noted in our premiere recap, The Affair transformed this year from a highly-entertaining, occasionally hilarious story of a man-baby novelist almost having sex with his own daughter, into a depressing, horrifying Twin–Peaks-meets-Oz knife to the nope-nope jugular.

If we want to get specific, I’ll nominate Brendon Fraser on The Affair, for his turn away from mummy-slaying Hollywood hunk into the literal dictionary definition of the phrase “aw, man.” #SaveBrendan.

Tom Batten: At some point over its six-episode run on Amazon Prime, Fleabag goes from being the best comedy of the year to the most wrenching drama of the last couple. It’s like MDMA cut with heroin manufactured from a poppy plant grown on your first dog’s grave.

Victoria Edel: Tom Kirkman, Designated Survivor. All it takes to go from boring HUD Secretary to POTUS is a suit and contact lenses. Now that’s what I call presidential.

Nick Ross: Donald Glover, Atlanta. From Derrick Comedy, to Childish Gambino, to Troy & Abed, Donald Glover wears many hats and they are all stylish as hell.

Emma Fraser: Keri Russell’s forehead vein in The Americans showed just how much angry acting can transform your face and for this scene alone the Emmy should’ve been hers. Maybe the Golden Globes will make up for this.

Drew Grant: This is going to either The Night Of or the second season of The Leftovers. I’ve watched neither beyond the first episode, because I found both shows to be really intolerable. But then apparently both get SO AMAZING and no one shut up about them, making me feel like either everyone developed terrible taste (possible!), OR, more likely, both shows took the hardest left somewhere along the way–like “that last episode of The OA” hard; so hard it’s almost a U-TURN–and course-corrected into some super fascinating material.

Jake Flores: Pablo Escobar from Narcos: In season one, Escobar won our hearts and our minds with tight brown 70s pants, beer-gut-contoured dress shirts, and a mustache that you could cut up lines of cocaine with. In 2016’s season 2 he’s covered in blood and has Beast’s hair from X-Men. He looks awesome. If he walked into a bar in Bushwick no one would even turn their head. Okay, this is mostly because I kind of look like fat Escobar.

Dana Schwartz: UnREAL. Like, for the worst? After such a promising first season, we got a blundering second season of misstep after offensive misstep. I prefer the real Bachelor at this point. 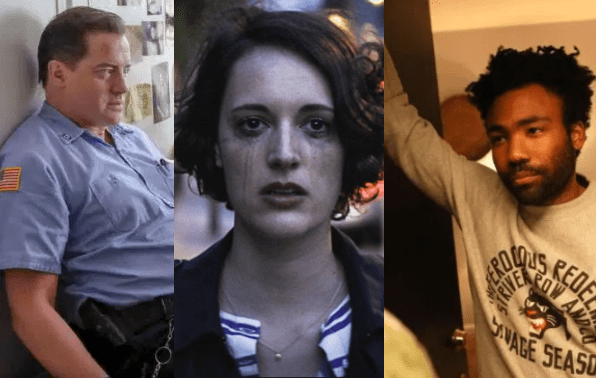