Mayor Bill de Blasio stopped by Parkchester Baptist Church in the Bronx to pick up his latest endorsement from Bronx Assemblyman Luis Sepulveda, but he spent the large majority of the speech railing against President-elect Donald Trump and his proposed policies—a sign of what’s to come on the campaign trail as the mayor seeks reelection next year.

Trump has proposed to create a Muslim registry, ban Muslims from entering the country, deport up to 3 million undocumented immigrants who he says are criminals and institute a more aggressive national stop-and-frisk policy. De Blasio started off by commending the bravery of Sepúlveda, who suggested that his mother might not have committed suicide decades ago if First Lady Chirlane McCray’s ThriveNYC mental health initiative had existed.

But his focus shifted very quickly to Trump. He noted that the election has caused confusion, fear and “a great sense of the unknown” but that the country is in unchartered territory not just because Trump is an unusual president who “changes his mind a lot” and “tweets in the middle of the night”—it is also because of the people.

“If there was a one person, one vote standard, 2.5 million more people voted for the other candidate,” de Blasio said. “Now we are losing this a little bit in the discussion. I would think every newscast would start with, ‘Election Complete: 2.5 million people for this woman, less for this guy, somehow this guy gets to be president anyway.’”

He admitted that he “felt a confusion” over the election results and that it felt like a chapter had closed but that he had quickly realized that the election was not an end but rather a beginning and “we now write the next chapter,” noting that people of faith “are going to be a crucial factor in setting things right.”

Though some critics have raised questions about whether the mayor’s heightened focus on Trump is a wise campaign tactic, the parishioners in attendance were rooting him as he blasted Trump and promised that the city would fight his most controversial proposals.

All throughout his speech, parishioners yelled “Yea!,” “Yea, that’s right!” and “That’s right!” as he railed against Trump. He told the audience that if Trump comes and says he will “deport lots of people,” he would repel him with the reminder that Hillary Clinton won the popular vote.

“What about the 2.5 million more people who did not vote for you? Are you sure have the mandate for that?” the mayor, a belated but enthusiastic Clinton backer said.

“Do you have the people with you? Guess what? Poll after poll after poll including a lot of voters who voted for the guy say, ‘Well I mean, I voted for him but I actually don’t want him to take away my health insurance,” he said, garnering laughter from the audience.

At one point, parishioners got a sonic jolt when mayor struck the microphone while attempting to convey his emotions on Trump’s proposals. He also apologized to the pastor for running on and on because the subject gets him riled up.

“I’m sorry, sometimes I get worked up,” de Blasio said to the pastor, insisting that he will be brief. But he had support from one of the parishioners who yelled out in response, “It’s the right place!” and de Blasio responded, “Thank you!”

The mayor has also received endorsements from Brooklyn Borough President Eric Adams, the Uniformed Sanitationmen’s Association and building workers union 32BJ SEIU—similarly reiterating at those announcements events that the city will protect its residents under a Trump administration.

The mayor said that Sepúlveda held his “feet to the fire” when they first met at a diner.

Sepúlveda, for his part, noted the mayor’s accomplishments such as universal prekindergarten, his push for affordable housing and expanding paid sick leave, saying that de Blasio “has suffered his fair share of slings and arrows that come from being the mayor” but the city is fortunate “to have the right mayor guiding us, especially for the last four years and hopefully the next four years.”

And he, too, weighed in on what a Trump administration will mean for the city. He said that while the election has caused concern, fear, anxiety and a loss of hope and noted that Muslims and people of color have come under attack. But he stressed that the city will not cave into Washington’s demands.

“We’re fortunate that we live in a city that has always been a firewall against policies that come to Washington that will hurt people in this city and in this community,” Sepulveda said. “New York City has always protected those regardless of the political whims.” 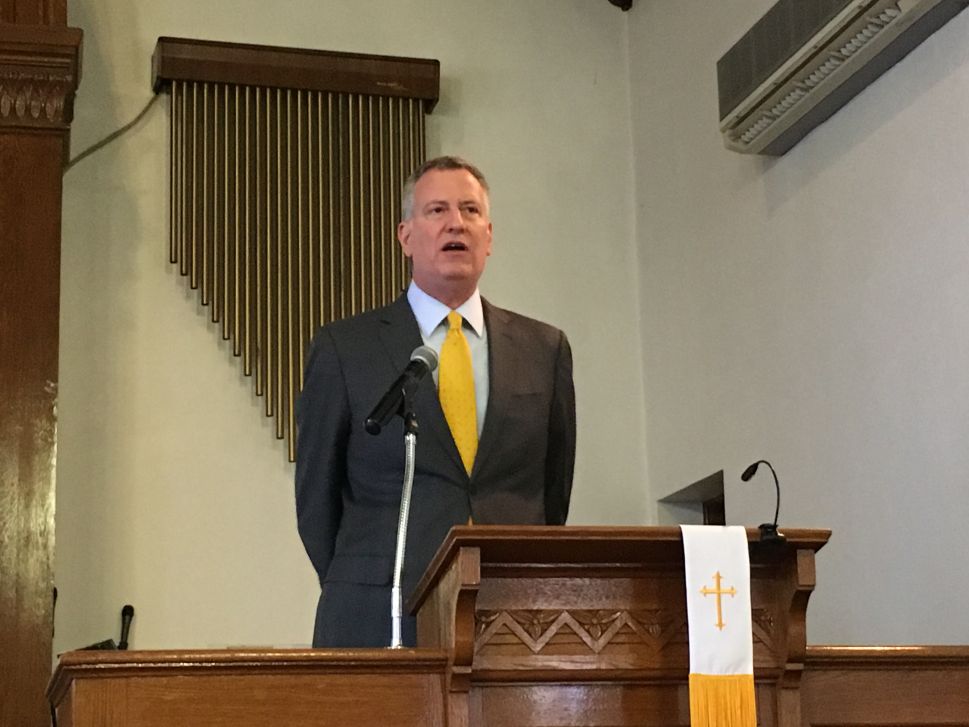