The city Campaign Finance Board slapped Bronx Councilwoman Vanessa Gibson with a whopping 68,639 fine for a series of violations in connection with her 2013 campaign, primarily for surpassing the board’s mandated spending limit.

The board—which recommended penalties today for a number of elected officials, including Mayor Bill de Blasio, Comptroller Scott Stringer and former Council Speaker Christine Quinn—also called for Gibson repay $2,520.28, all the remaining money in her account, to the city matching funds program. Gibson will have to either raise new money or pay out of pocket for the punitive fees—the biggest of which, $65, 574, was a consequence of her exceeding expenditure limits.

She got fined$1,660 for making impermissible post-election expenditures, followed by $739 for accepting a contribution from forbidden business entities and $150 for filing a late disclosure statement.

The board also said Gibson failed to provide a proper credit card statements or required financial documents from bundlers who collected cash from the campaign.

Defending Gibson at the CFB hearing was legendary Bronx political impresario Stanley Schlein. Schlein insisted that, despite Gibson’s four previous years in the Assembly and her strong Bronx machine support, her Council campaign was a shoestring operation lacking professional staff.

“This also is a community-based grassroots campaign mostly run by volunteers,” Schlein said. “I don’t think anyone on the campaign was on salary. One or two people.”

A spokeswoman for Gibson did not immediately respond to a request for comment. 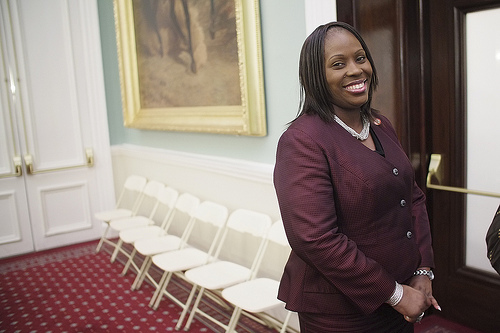