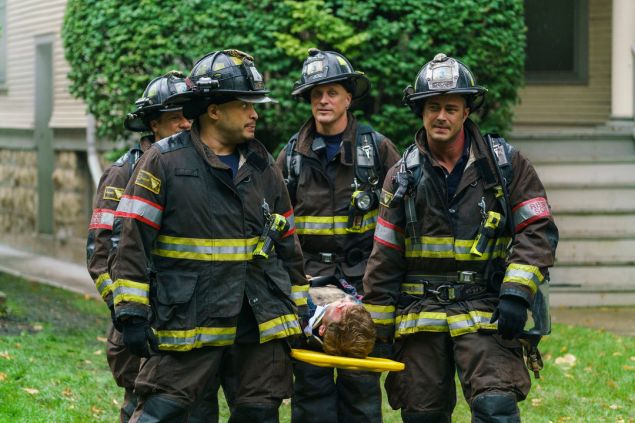 It’s the show that launched a thousand others.

…okay, maybe not a thousand, but it does sort of feel like it. Chicago Fire hit the air five years ago and to date has spawned two spin-offs with a third coming soon. It begat Chicago P.D., Chicago Med, and the soon-to-be Chicago Justice, a rarity in the TV world. Now, the original is reaching another milestone – its 100th episode.

The showrunners and cast of Fire are fairly tight-lipped about the specifics of the episode, but they were game to dish about some of the storylines swirling about at Firehouse 51.

“Our way into the episode is that the bar owned by three of our firefighters, Molly’s, is celebrating its 100th anniversary,” explains Michael Brandt, co-creator and showrunner. “But, of course, things don’t exactly go smoothly.”

Fellow co-creator and showrunner Derek Haas jumps in to say, “This reporter digs up this scandalous history about the bar. There’s some gangster activity and some dead bodies and stuff. It turns out pretty bad, but it’s funny too.”

This episode is also the winter finale for the series and Haas promises that, “of course, there’s going to be a giant surprise at the end of the episode as well. “

It’s that constant uncertainty about what’s going to happen next that Haas says keeps viewers coming back week after week. “I think our show is better than most at surprising the audience. We’re not afraid to lose a character. We’re not afraid to have them go face first into a fireball or threaten to the leave the firehouse and then do it. Whereas I think a lot of other shows reset episode after episode, year after year. We grew up watching The A Team where at the end of the episode you had the same four guys and whatever was dangerous wasn’t really that dangerous. I think we’re always trying to keep it fresh. It’s one of the few shows were you get to write action, drama, suspense and romance all in one hour.”

That willingness to kill off a character often unsettles the actors on the show. David Eigenberg who plays firefighter Christopher Herrmann says, “it is a source of anxiety for us, but my wife is like, ‘you’re fine.’ ”

“That’s because you’re the heart….and the asshole of the show,” laughs Yuri Sardarov who plays Herrmann’s fellow firefighter Otis.

When they’re not putting their characters in peril, the writers are busy exploring their lives outside of the firehouse.

Squad newcomer Stella Kidd (Miranda Rae Mayo) quickly jumped into a relationship with fellow 51 firemen Kelly Severide (Taylor Kinney) but things have taken a turn, explains Mayo. “They’re on a bit of a break. They went through something pretty dramatic and traumatic, which is not really their style. Both of them really thrive in an easygoing environment when it comes to relationships and that’s why it was working out really nicely at first. But I think Stella is responsible enough to not just shove over her issues onto the palate of the person that she’s sleeping with. She’s a strong independent lady. She wants to take care of her business before she moves forward with anything serious.”

In another twisted triangle of sorts, paramedic Sylvie Brett has fallen into a relationship with Antonio, her partner Gabby Dawson’s brother, who is a cop in the Chicago police department. Kara Killmer, who plays Brett, explains, “I think it was sort of a surprise – but I get it. They both have difficult jobs and I feel like they’re very resilient. It totally makes sense that they would connect. Sylvie had to nudge Antonio into it, but we’ll see where it goes.”

And how does Gabby feel about the pairing? Her portrayer Monica Raymund says, “Well, Gabby supports them, but it’s a little strange when it’s your brother and your partner. It’s very personal. It’s mixing business and pleasure. Gabby doesn’t want to get in the middle of it, but obviously she’s in the middle of it.”

But Gabby has her own issues to worry about – she’s a single mother and has been in an on-again off-again relationship with Lieutenant Matt Casey for a while now.

“I love the storyline of being a mom,” says Raymund. “I think it’s really important to see a working mother on television who has a badass paramedic/firefighter job, who’s supporting her family and her partner. I think it increases the stakes for Gabby as well – because it isn’t just all about her, she has a child to take care of.”

Gabby’s been on quite a ride during her time with Firehouse 51 – moving from paramedic to firefighter and back to paramedic. Raymund breaks down that journey a bit, saying, “She was good at being a paramedic but then she wanted something more so she became a firefighter. But then she decided to adopt Louie and things needed to change.” Then she adds, “You see, the whole point of living on the planet and creating relationships, going after your dream, is you have to make sacrifices. It’s not just about being ambitious and trying to fulfill your own desires. It’s also like, ‘well now I have a child and I have to put that child first. That means my dream might change and that’s ok.’ That’s a good thing – to be able to adapt and have fluidity of your own dreams. I think that’s an important conversation to see a woman have.”

With regards to her character’s storyline, Raymund contemplates that age-old question – Can a woman really have it all? She answers with, “Well, Gabby is still working as a firefighter/paramedic in the same house and she still has her guy, so she kinda did get it all.”

But the big question that many longtime viewers are asking is if Gabby and Matt will be tying the knot any time soon.

Raymund laughs as she says, “Do you want them to get married?” Getting a bit more serious she says, “I can’t say yes or no about that right now, but I can say that we do see them make a commitment to each other. They do move forward.”

Brandt confirms this when he says, “It’s something that we’ve been talking about doing for five years.”

Whatever step it is won’t happen easily as Raymund did give away that something with Louie is going to throw a wrench in the three of them becoming a real family. “Let’s say there’s an outside force that makes things get very complicated, and it’s pretty heart wrenching to watch.”

As for what’s coming in January, Haas and Brandt revealed. “We’re doing a big Severide storyline that’s going to be part of both PD and Med,” says Haas. Brandt adds, “This winter finale is a great tee up. People are going to want to come back in January to see what’s happening. It’s going to be a long five weeks.

On getting to the often elusive 100th episode, Killmer sums it up by saying, “In this day and age, when shows can be on for one episode and then get pulled by the network, it’s not only an absolute miracle that Chicago Fire has made it to our 100th but that there’s three other shows because of it. And, Chicago is a great backdrop to spin off at least hundred more episodes.” 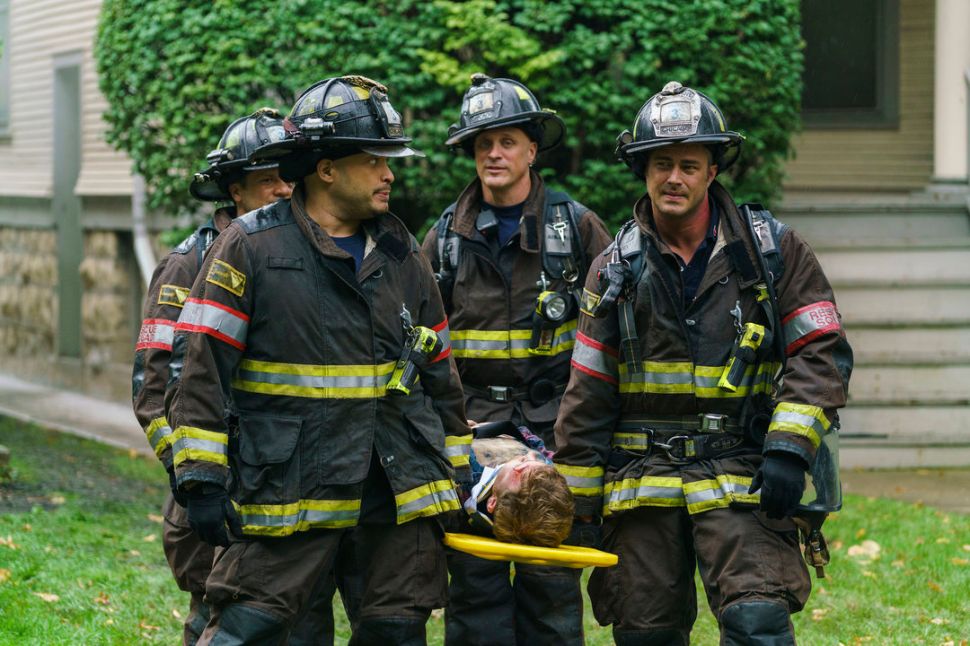