The first time you see Twin Peaks play live, two things stick out—how young they are and how tight they sound.

Though everyone in the band is still in their early 20’s, there’s a maturity in the certainty of their arrangements that comes from chemistry. Drop out of school and treat rocking out like your job, and maybe you, too, can bottle some of that whippersnapper swag.

Chemistry’s all well and good, but it amounts to nothing more than a science experiment if the songs are no good. The first time I saw them, at 4 Knots Festival two summers ago, they summoned the electricity of those tent revivals in the South, no hyperbole. Their drew the biggest crowd of the day, and the audience went apeshit for them—singing every word, jumping up and down in effortless synchronicity. Twin Peaks play to fans of the classics who still know how to move, the children of baby boomers who create a pit rowdy enough for you to fall down in but will always lend an outstretched hand to help you back up.

This is the new(ish) Chicago DIY culture, a world away from the in-your-face ’80s sounds of Big Black or Naked Raygun. The focus on community is still strong, but the new crop is slightly goofier and shroomier, of which bands like Twin Peaks, Ne-Hi, and Whitney are all a part. Like that golden era of Chicago post-punk, all-ages shows are still important, and feeding the musical brains of the youth—Twin Peaks’ members started hitting shows when they were 15, mere sophomores in high school—and studying bands like White Mystery and The Funs convinced them that this was what they wanted to do with themselves.

De facto band leader and guitarist Cadien Lake James, lead guitarist Clay Frankel, bassist Jack Dolan and keyboardist Colin Croom all contributed songs to this year’s infectious Down in Heaven, mixed by the revered John Agnello, whose credits include everyone from Sonic Youth and Dinosaur Jr. to Kurt Vile and The Kills, along with this year’s fantastic Holy Sons record. Down in Heaven sounds more comfortable and immediate, the result of recording at a friend’s house in The Berkshires instead getting it done in the midst of a Chicago blizzard, as was the case with 2014’s Wild Onion.

Ahead of their big headlining show at Webster Hall on Friday, December 9, I spoke to guitarist Clay Frankel about being young, dumb and full of cum while still keeping the ship afloat. But we also talked about having your parents come out to shows, the importance of camaraderie and socialist band practices to keep Twin Peaks healthy, and the joys of corduroy pants. Witness the Easy Rider-esque video for “Butterfly”, with Frankel and the boys playing dead around a graveyard, bob your head and lose yourself in the cheeky adolescent bombast. Something tells me these guys have a good thing going.

Some of the older Chicago dudes who helped make the scenes, like Steve Albini and Jason Narducy, are still going at it and present around town. There’s such a rich history about that community. I guess that you guys and your friends from Ne-hi and White Mystery, are all part of a newer, distinct community. Are the two complementary? You guys seem a lot more than those of the legendary punk dudes. When did that transition start happening?

Sometimes it’s the music changing outside of Chicago that drips in to the music being made here. Growing up I never really listened to Big Black or Shellac. To me, growing up was listening to The Black Lips. A huge inspiration—to young guys, it seems doable. Just playing in a band seemed like a whole lot of fun. And lo-fi recordings were really easy to do. So we started getting our shit together and playing these house shows. People are extremely welcoming because we arrived at the same playing field. Everyone was very friendly.

So you guys take your fiends on tour, stay through each other’s sets, keep supporting your friend’s shows?

The trend here is getting less and less communal. More glorified solo-projects with kids who find talented studio musicians and strongarm promoters into opening spots at popular venues.

Well that shit’s easier nowadays, I think. It’s an easier pill to swallow when it’s just one guy and you don’t have to pay attention to these five idiots running around like a conglomerate. That’s harder to make possible financially.

There’s a trust piece there, too, right? You know you can trip out and do fun shit and get a little crazy with these guys and they’re still gonna show up for soundcheck the next day with their shit together, right?

Yeah, they better be on the goddamn ship! We lose one, we lose it all.

“It’s a total fucking socialist camp. We just gotta salute the music, and push the ego to the side I guess.”

You guys are a little bit younger than me, but I get the sense that psychedelics are really popular again. They took a backseat to club drugs when I was in college, and it was much more of the weirdos who were experimenting with natural stuff like mushrooms and LSD. How have you guys tapped into that trippy Americana? To that connection between garage and psychedelic music that hasn’t been clearly identified?

We’ve taken all the psychedelic drugs, but we already had an interest in that music before we took acid or mushrooms. You have all this music to draw on, and you’re attracted to the energy of punk music. But we really love all these old Beach Boys records, all these ’70s records. Just weird, psychedelic stuff where singing is panned differently with all sorts of instruments. So it’s just a goulash, a blend, where we’re trying to play high-energy stuff but also get psychedelic things across.

And learning when to feel each other, too? I know you guys went out to the Berkshires to record Down in Heaven, but we can hear it, it gels. You guys have always been tight but it never feels like you’re rushing. They’re short because they’re tight, not because anyone is clipping you along. How do you guys work together? Do you learn the lessons from the older friends and relatives in your community?

I don’t know, we’re still kind of figuring it out. Not professional by any means. We learned to do everything equally. Whatever money there is, we split it all down the line. It’s a total fucking socialist camp. We just gotta salute the music, and push the ego to the side I guess.

Maybe that’s why Cadien looks so much like Neil Young to me. In his prime, collaborative years, that’s what Neil was capable of doing. He makes this scowl of a face when he plays, a totally Neil Young look.

Oh, he’d love to hear that. It may be because he just read a 600-page biography of the man.

Yeah, Shakey. He says the first half is good and then it kinda slows down.

Well this must’ve been earlier, at 4 Knots two summers ago. Someone drunkly screamed “Beast of Burden” from the photo pit.

Ah, damn! Well if we knew how to play it, we definitely would have played it. That’s a great goddamn song.

One of your families was on the VIP boat, too, I remember. Is that common?

Yeah, our families will come to certain shows. Every time we play Madison, that’s where Connor’s dad went to college, so he goes up there, gets drunk and comes to the show. If our parents need to leave the city they’ll pick a show we’re playin’ and make a little trip out of it.

I thought about that day when I heard your first single, “Butterfly”, with the line about parents dancing to The Zombies. It got me thinking about my own baby boomer parents, how much I love them but how much they embarrass me sometimes.

It’s funny, I was writing that in Austin at SXSW, I guess two years ago? I was sitting in the parking lot writing it and there were Zombies posters everywhere because they were playing.

So your parents don’t own corduroy pants?

Naw man, I do, though! I have three pairs of corduroy pants! I love corduroy pants. I picked corduroy pants because the rythym of it was way better, I dunno. I couldn’t have done polyester pants.

Well the lines of corduroy are very massaging, too. If you sit down on the right surface you get those grooves pressing into you. You should make it your thing.

The Pitchfork Review said you’ve already gone through your late-career meltdown phase where you retreat to your cabin and record your Basement Tapes.

And I can’t imagine you guys even thought about that. But is it just at the point for you guys where you know when it’s time to remove yourselves from the chaos to create?

Yeah, I guess so. It’s funny how much people talked about us in that sort of vein, slowing down. A friend of ours had this beautiful house, you know? It was a no-brainer! We brought the equipment, went out there. Bands that were playing Boston would come by. We’re still partying our fair share, but getting shit done. And musically, our albums have always had this element of slow, not-straight punk.

Yeah, you don’t have to just play fast to make something energetic. 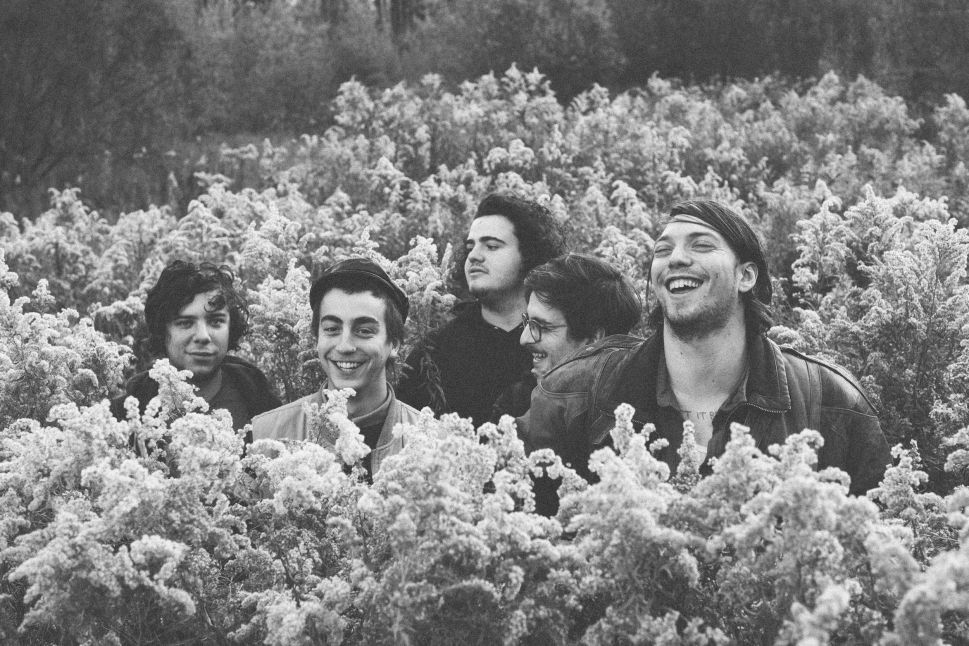