Christmas and Hanukkah share a holiday season, but outside of a shared calendar, extreme commercialization and gift giving, there is almost nothing else these two holidays share. And yet, Jews in America suffer from Christmas envy—a condition that thwarts a true appreciation of Hanukkah and, at the same time, debases Christmas.

Christmas is about faith and the birth of Jesus. Even agnostics, atheists and secularists acknowledge that fact. It is the secular culture of Christmas, as celebrated in America, which resonates with non-believing Christians and the commercialization of the holiday that helps secular Americans swallow the religious pill with apparent ease.

Hanukkah is about revolt against tyranny and about freedom. The candles that are lit for eight nights in a row are a symbol of light and represent the rededication of a Temple that had been desecrated and defiled by Syrian Greeks and the assimilationists.

There is no shared history with Christmas and Hanukah, no common religious ground or observance. It is only the commercialism that is shared.

It is all about kids and presents. Christmas presents derive from the three wise men giving Jesus three presents: frankincense, gold and myrrh. The tradition of gift giving mostly started in the 19th century, primarily in New York City. And so, too, did the commercialization of the holiday.

Hanukkah has a tradition of giving children money known in Yiddish as Hanukkah Gelt and in Hebrew as Dimei Hanukah. The tradition is centuries old, but not old enough to be found in the Bible or Talmud. Actually, the story of Hanukkah is not found in the Jewish Bible. It is found in the Apocrypha, as well as the Talmud and in Josephus. No gift giving or even money giving is mentioned in the original stories.

The idea of money was probably used to incentivize the giving of charity to the poor to enable them to afford the candles needed to light the holiday menorah. Some say the giving of money was introduced in order to play the traditional Hanukkah spinning top game of “dreydel.” Maimonides explains children are given treats to help encourage their learning. Psychologist Carol Gilligan would term it positive reinforcement.

Investigate the history of the celebration of Hanukkah in Europe and it becomes obvious that it is, at best, a minor holiday. And yet, nowadays, it takes on major significance.

Hanukkah rises in prominence for three reasons. First, its seasonal companion Christmas became more and more central to Americans as a secular holiday, and so Hanukkah became the Jewish side of the same coin. Second, because of the rise of Jews in American society and the freedoms they found in America, Jews felt comfortable showing off their tradition and Hanukkah was elevated as a holiday equal to Christmas. And finally, Israel and Zionism played a huge role in catapulting Hanukkah into the mainstream of Jewish life and observance and in the public eye.

Zionists looked long and hard though Jewish history to find example of heroes. Not just examples of fighters, but outnumbered underdogs who rose up and defeated oppressive, pagan, godless, ruling culture. Hanukkah fit that model, so it was resurrected. The rabbis had difficulty with the story of Hanukkah and that is why it is almost written out of Rabbinic history and is relegated to less than a page and a half of the Talmud and merits only a discussion of the miracle of oil. The battle of Hanukkah has no place in the official Biblical canon because the Maccabees went from heroes to corrupt leaders which, in turn, led to the destruction of the second temple.

Zionists thinkers brought the Hanukkah story back to life in order to stimulate Jewish pride in the past. They believed that Jewish history was not simply a vale of tears and a history of persecution after persecution and pogrom after pogrom. Another example of a story written out of Jewish history and then revived in order to bring about Jewish pride is the story of  Masada—another near perfect example of Jewish heroism in the face of oppressive Roman foes. Only in the case of Masada, these Jewish fighters chose suicide over slavery.

The Christmas envy that Jews feel this time of year is to be expected. In a secular America imbued with Christian and Jewish values, the overwhelming secular culture embraces Christmas. There is much to be proud of in the history of Hanukkah beyond candles and gift giving. It is wrong to turn the holiday season into a competition. They are celebrations. And both holidays can and should each stand on their own laurels. No pun intended. 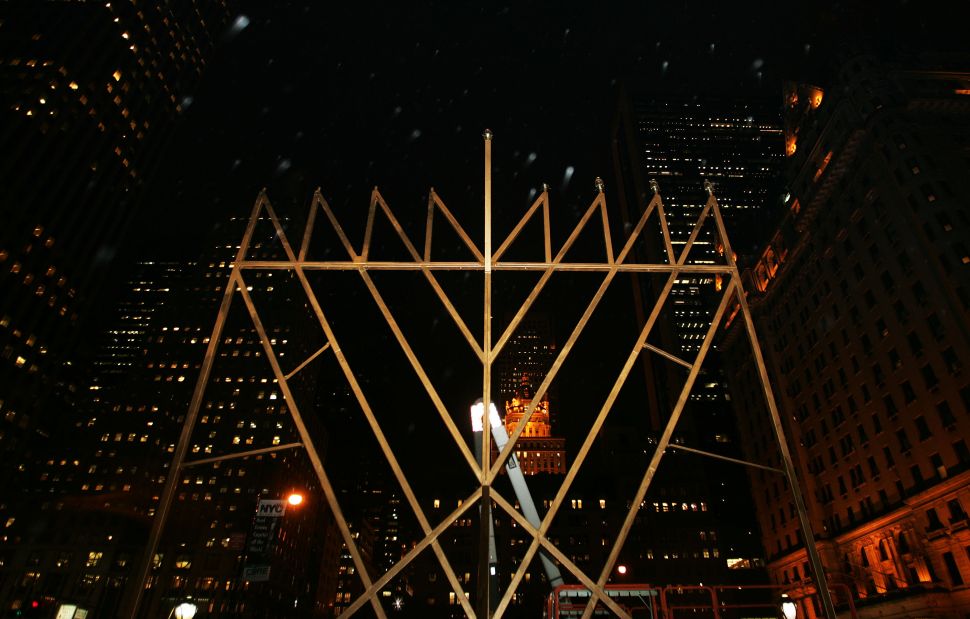