It’s been nine years since a neighboring chimney collapsed on Chumley’s, forcing the iconic literary haunt to shut the doors to its faithful West Village clientele. As its loyal patrons mourned, the boarded off space sat untouched, awaiting a second life. Just as the Buildings Department permits on the space threatened to expire, the New York City relic found its salvation in the restauranteur responsible for redefining the city’s sushi standard, Sushi Nakazawa’s Alessandro Borgognone.

In its heyday, the booths at Chumley’s glittered with the flash of literary giants like Earnest Hemingway, John Steinbeck, Arthur Miller and Jack Kerouac. Scott and Zelda Fitzgerald were said to be frequent occupants of the corner alcove to the left of the dining room fireplace. For Borgognone, reviving one of the literary world’s favorite watering holes was not taken lightly. “The pressure’s tremendous,” said Borgognone. “I think the real pressure is redeveloping the idea of Chumley’s and aesthetically not changing anything about it while also putting your own spin to it and creating something that’s going to be for everyone.”

While it’s impossible for Chumley’s in 2016 to capture the same sentiment it held for New Yorkers up until 2007, maybe that isn’t quite the point. There still remains the familiar winding pilgrimage through the Village streets to the unmarked storefront at 86 Bedford Street. The walls are still plastered with the faces of its most influential patrons, alongside the ribbon of book covers winding its way through the dining room. There still lurks the secretive quality, lingering from its first life as a Twenties speakeasy. However, there’s also a certain effect, a panache that wasn’t there before. You can see it in the rich baroque maroon and gold wallpaper, in the rows and rows of glistening bottles behind the domineering walnut bar. But mostly, the essence of Chumley’s new life is in its menu.

As seen from the illustrious success of Sushi Nakazawa, Borgognone certainly has a knack for catapulting the careers of rising stars in the culinary world. Chumley’s serves as another example of that. For his first venture into comfort food, Borgognone chose Atera alum Victoria Blamey to head the kitchen. Considering her previous gigs were solely at fine dining establishments, Blamey was an offbeat pick to head a kitchen serving comfort food. “I don’t like the term that much,” said Blamey. “I think that people misunderstand it and think it allows you to be sloppy and messy–just rich and flat and uninteresting. When I think about comfort food, I want to think about something different.”

A photocopied piece of beige cardstock looks unassuming for a handcrafted menu from a fine dining chef, but every part of the menu is hand-sketched, save for the Chumley’s logo in tubular lettering on its front. The sparse handwritten list of dishes is simply followed by the the chef’s name scrawled at its bottom. It’s in the dishes themselves where the flair lies. The bone marrow slathered burger and hamachi crudo are a far cry from the $10 special pasta that occupied the 2007 Chumley’s menu of faded glory. However, this sweet feeling of juxtaposition is an accurate read on the pulse of an old icon that has been revived.

Even if you didn’t occupy a seat at Chumley’s in the good ole days, walking into the new Chumley’s makes you feel as if you had. The crimson velvet curtains and glistening tiered chandelier feel genuinely familiar. It’s a revival that rejects the idea of a throwback and instead exists as a time machine, pulling customers back to a time long before the restaurant’s 2007 demise. The space takes you back to its time of glamour, back to before the Sixties, back to when the word “cocktail” was a serious endeavor.

The authenticity of Chumley’s rebirth is due to an immaculate concern for detail by Borgognone. “We wanted something that really said ‘Alessandro Borgognone had his fingertips on this one,’” Borgognone told the Observer. “You can see that in the blue velvet curtains to the distressed leather button banquets. These are all little touches that belong to me.”

In the kitchen, Blamey painted a menu that would be the centerpiece of the new Chumley’s—one that cherished both old and new concepts. “When I was working with Justin Smillie, he told me, ‘You need to make them crave,’” says Blamey. “When you come from fine dining, that’s not your first priority. You are more focused on the art of what you’re doing, which is beautiful. I’m in love with that, but there needs to be a balance. I think comfort food for me would be finding how I can be myself in that dish and how can that dish also evoke something in that person that is going to make them come back.”

It’s clear that Borgognone has produced a winning start for a new era of Chumley’s, but one that takes into consideration all of its former lives. “It’s safe to say that we hope that the Chumley’s that we built is timeless,” says Borgognone. “If you don’t feel the same way today, then hopefully you’ll feel the same 20 years from now.” 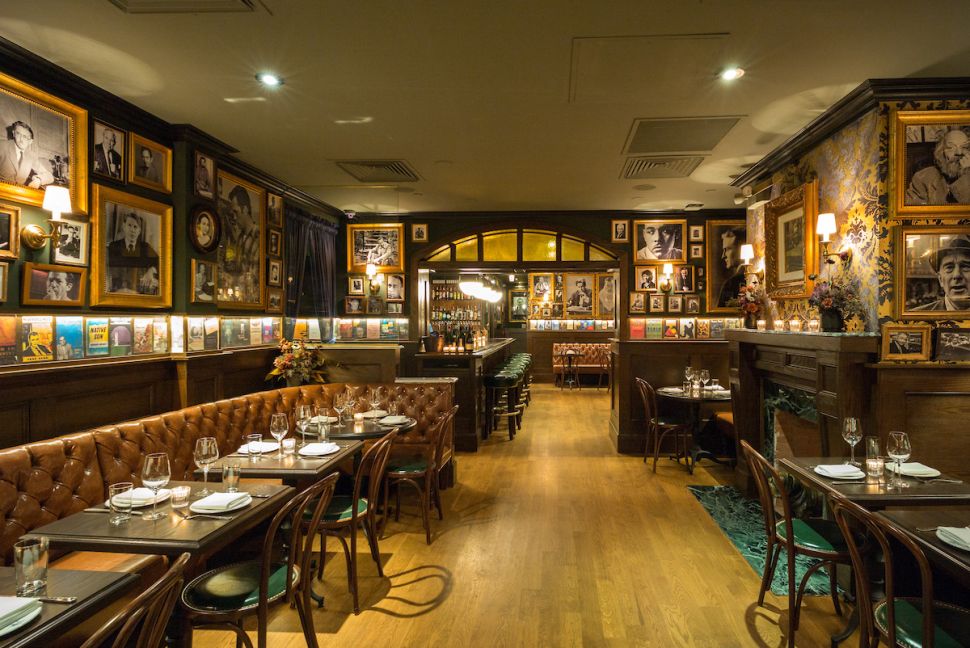