San Francisco 49ers quarterback Colin Kaepernick has made headlines for a number of reasons in the past few months.

Namely, for protesting by refusing to stand during the national anthem before football games, and subsequently declining to vote in the 2016 United States presidential election. “I am not going to stand up to show pride in a flag for a country that oppresses black people and people of color,” Kaepernick told NFL Media.

Until recently, however, he managed to keep his $3.21 million purchase of a Tribeca condo under the radar.

He apparently bought the unit back in July, but no one spotted the transaction until this week, when the LA Times noted that Kaepernick used the same trust (Kdc Family Trust, with his sister Devon Cherie Santos as the trustee) to buy the two-bedroom, 2.5-bath pad at One York Street that he used when buying a home in the Bay Area.

He bought the 1,733-square-foot condo from paid David and Jiaqi Chen, per public record. There are solid wood doors and wide plank oak flooring throughout, as well as south, east and west exposures. The gourmet kitchen is complete with glass cabinetry, as well as Miele and SubZero appliances, says the listing shared by Compass brokers James C. Cox Jr, Frank Giordano and Chad Maltby.

The baths are “spa like,” with Calcatta Gold marble floors, teak vanities and a Zuma whirlpool.

As the Los Angeles Times points out, Kaepernick restructured his contract with the 49ers in October, which “allows him to opt out of his current deal and become a free agent at the end of the season.” We wonder if Kaepernick’s real estate moves are any indication of what lies ahead for the quarterback…but no matter what Kaepernick decides, at least he’ll have a sleek Tribeca condo to hang at while visiting New York.

Perhaps athletes are particularly drawn to One York. After all, it’s the same building where former New York Ranger Derick Brassard bought a condo in September 2015. Alas, Brassard put his apartment back on the market almost exactly one year later, after he was traded to the Ottawa Senators. 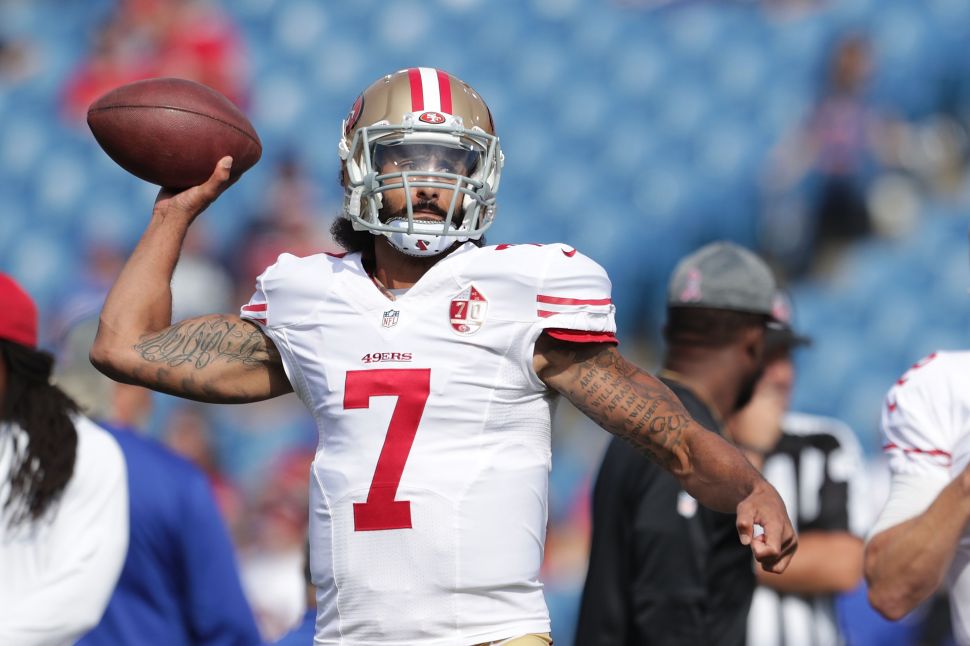